Oh I do love to holiday beside the seaside. 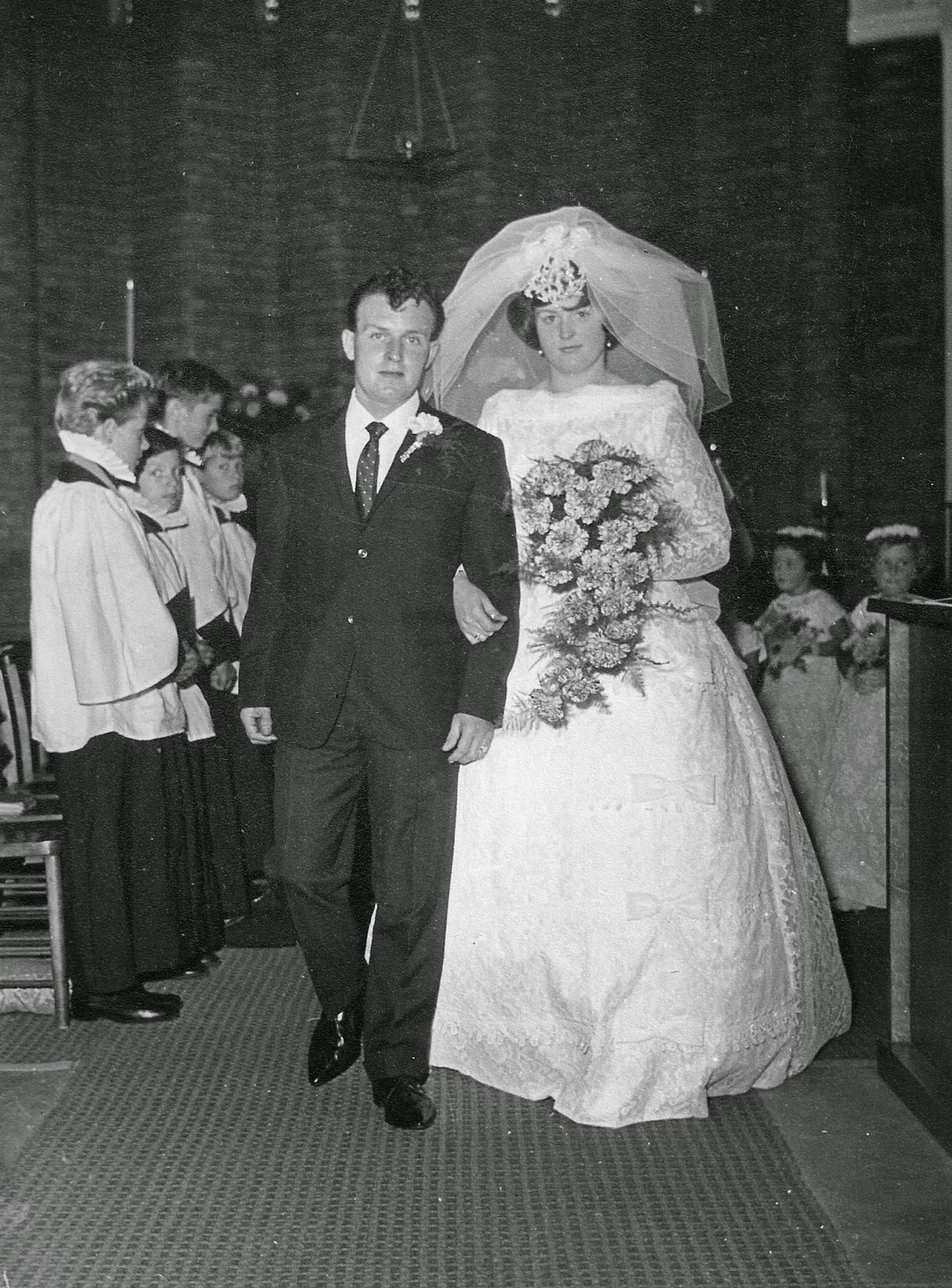 So this year we went away to celebrate my grandparents 50th wedding anniversary. It had been planned for ages, possibly before I even had Logan. All 17 of us went away to stay in a house in Norfolk for a week. 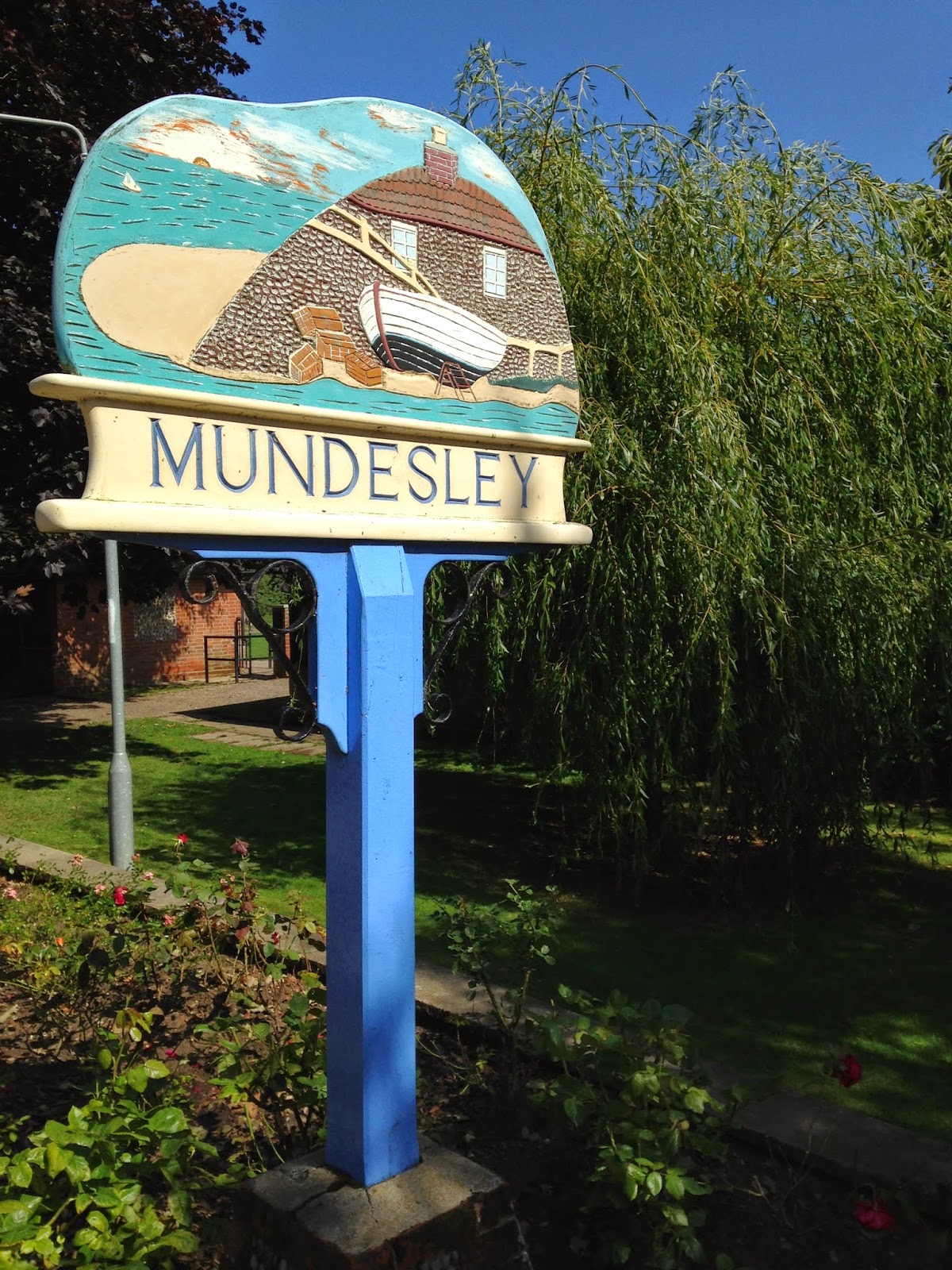 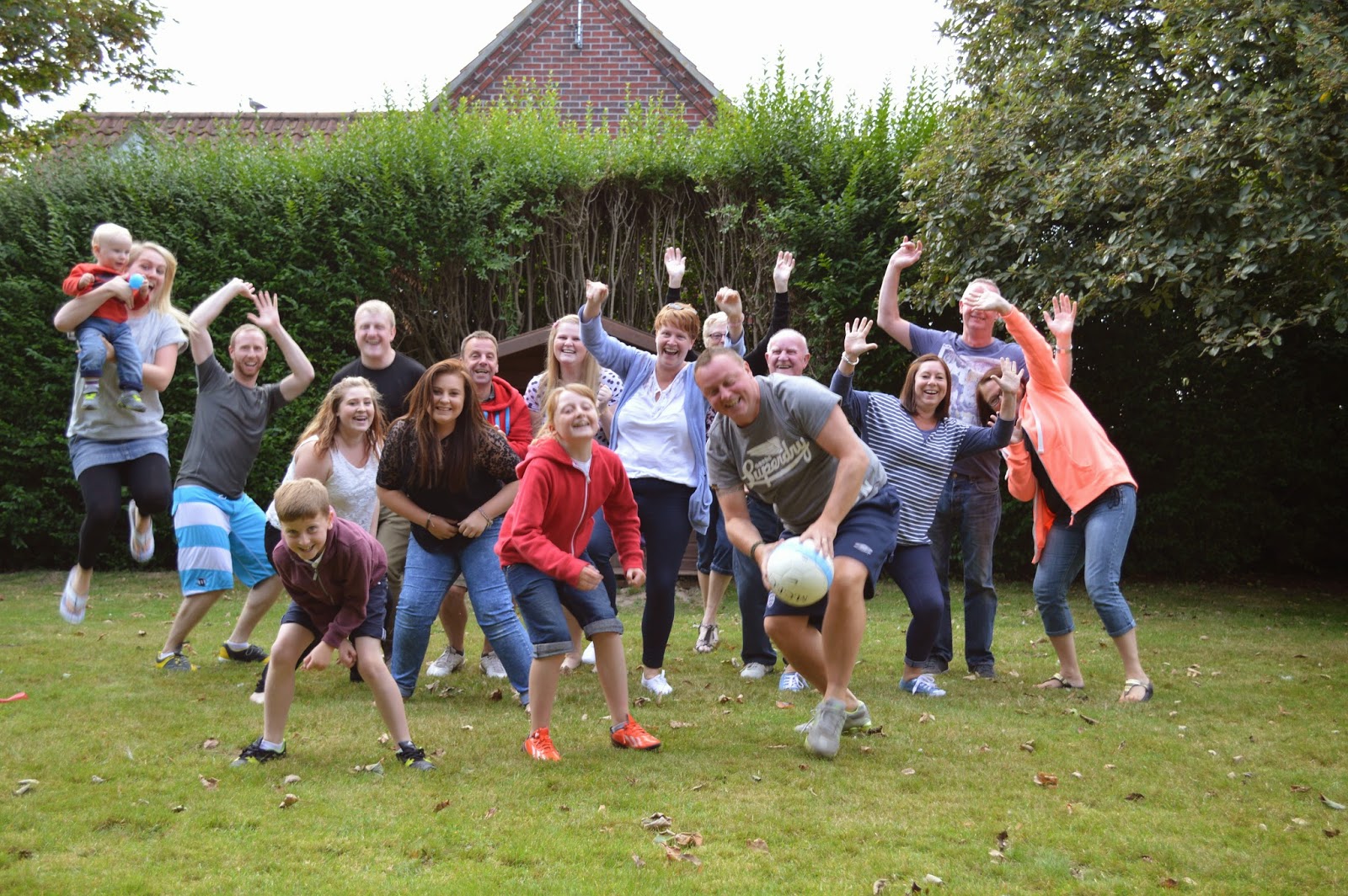 It was a blast! Everyone had a great time experiencing a big family holiday and LJ loved it. We took the opportunity that everyone was together to take some fun family photos, i'm not sure what everyone originally thought when I asked them to jump, but this was the result! 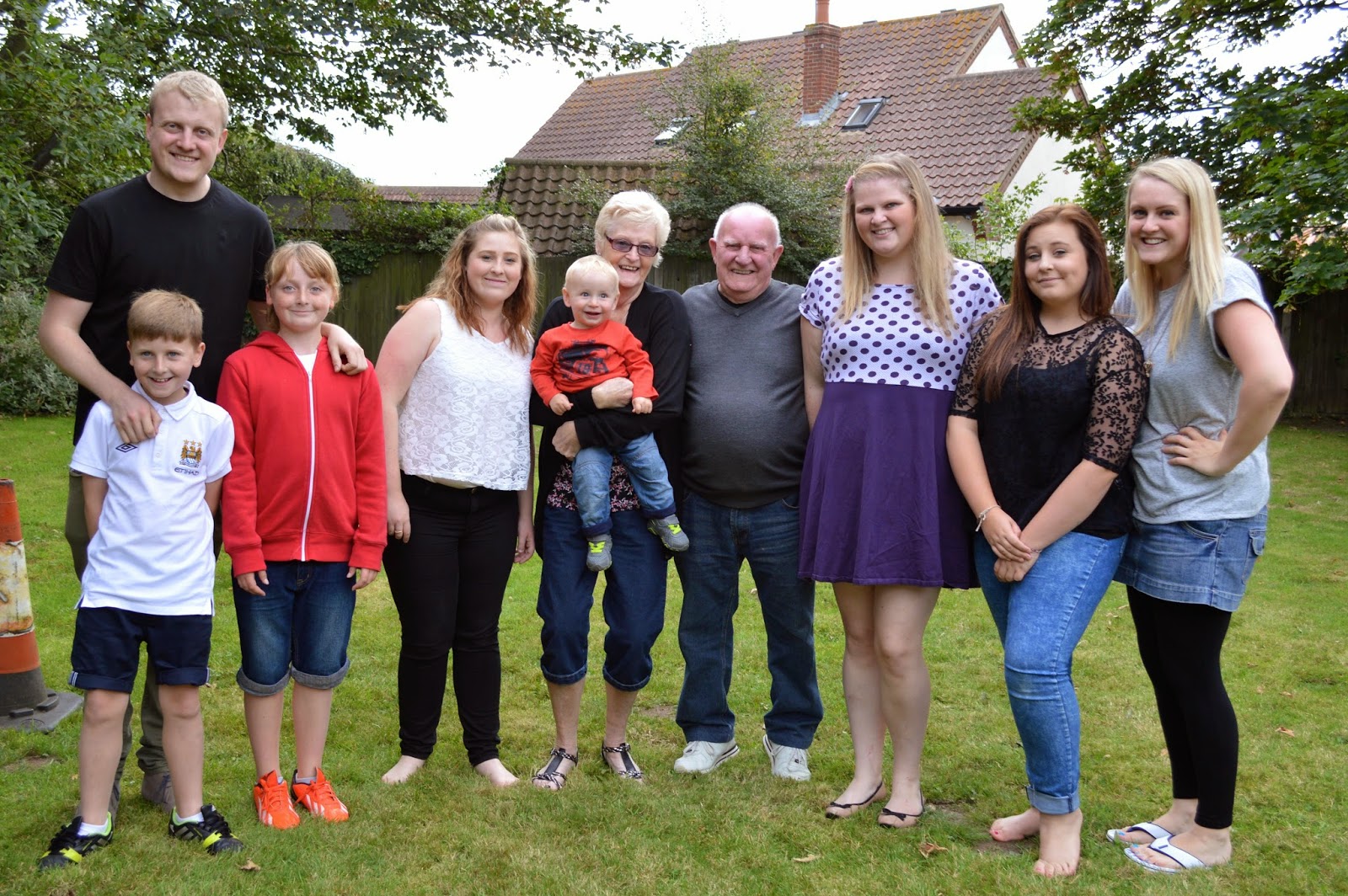 It was a lot easier getting the grandchildren photo, now that everyone is older. I don't think we've had one all together in years. 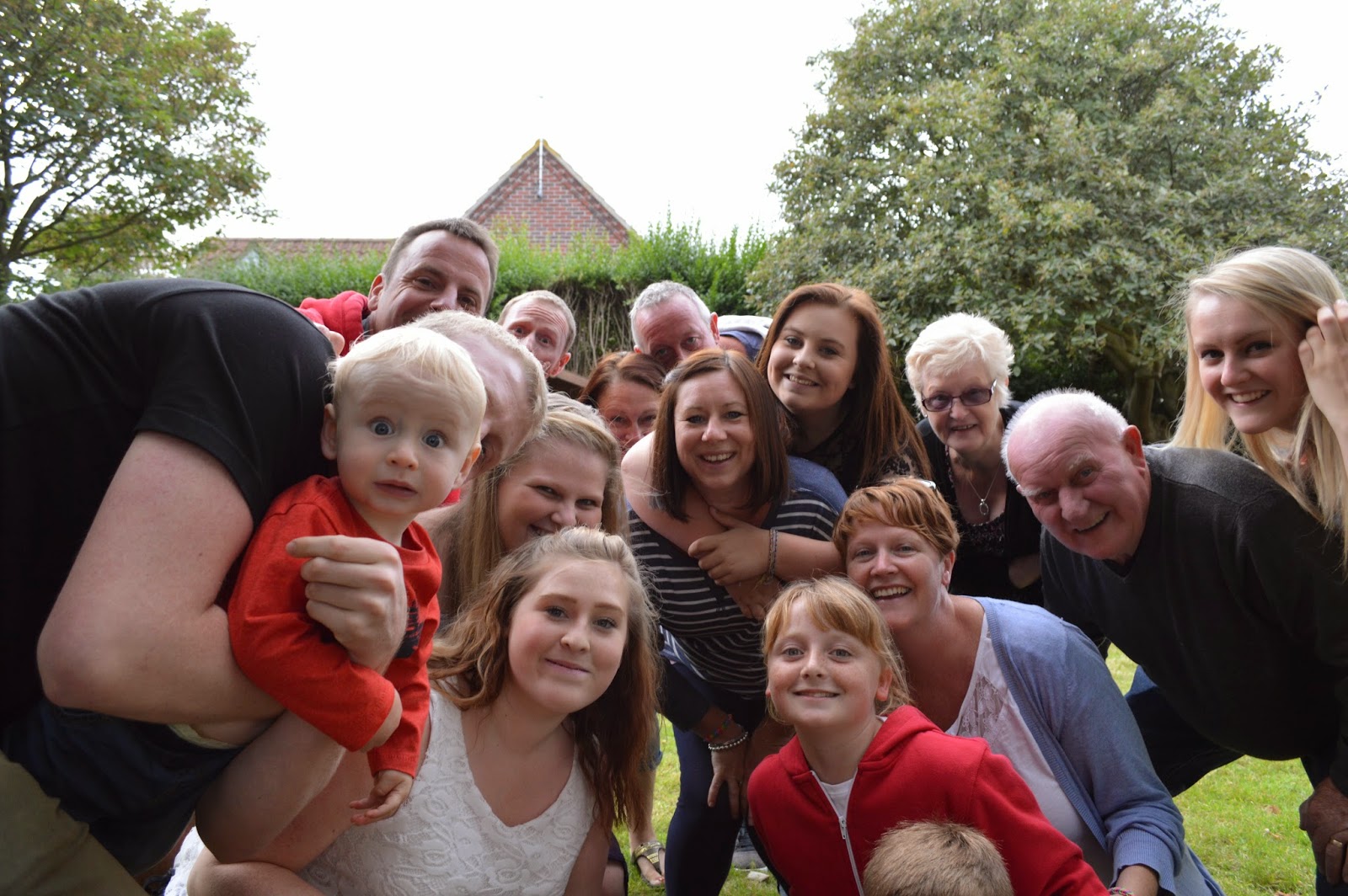 We also took the opportunity to take an Oscar's style selfie. LJ's face cracks me up every time. It's like he's just realised he's part of a crazy family. 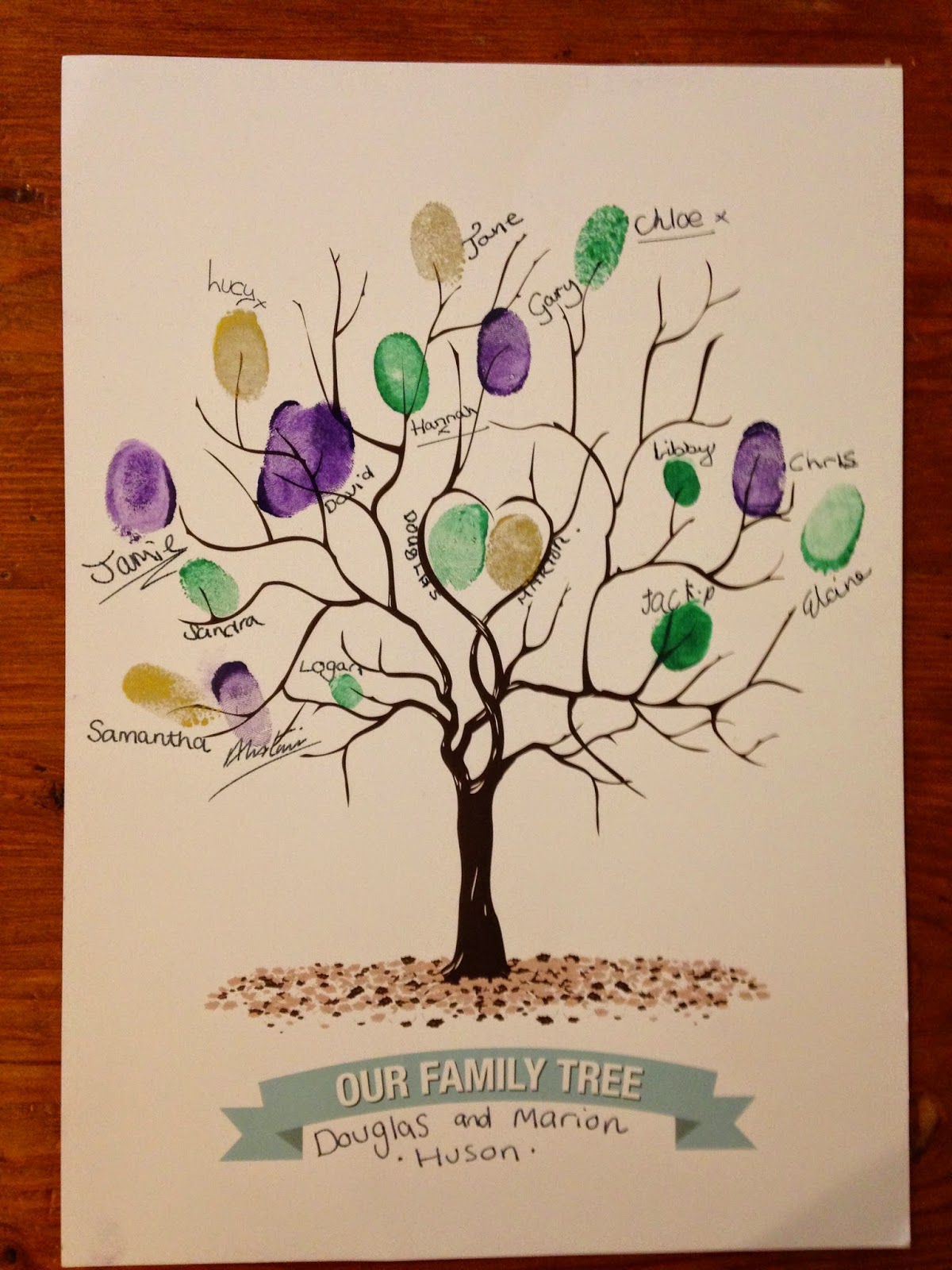 We also had a fun fingerprint photo to take part in. I first heard about fingerprint trees when my friend was planning her wedding and showed me a website called not on the high street. I got one print for my Grandmother's 80th birthday for the whole family to do, and this one for my grandparents wedding anniversary. The print ink from my local craft shop. It's an easy project to celebrate a milestone family event and it appears everyone is excited about producing a finger print.

The house itself was amazing. It had 8 bedrooms and you'd find yourself going upstairs and having to take a second to work out which direction your room was in. We were lucky enough to have a cot in our bedroom (One less baby related item to squeeze in the car) and LJ adapted well to it, although later in the week, there was talk of a friendly ghost (more on that later). 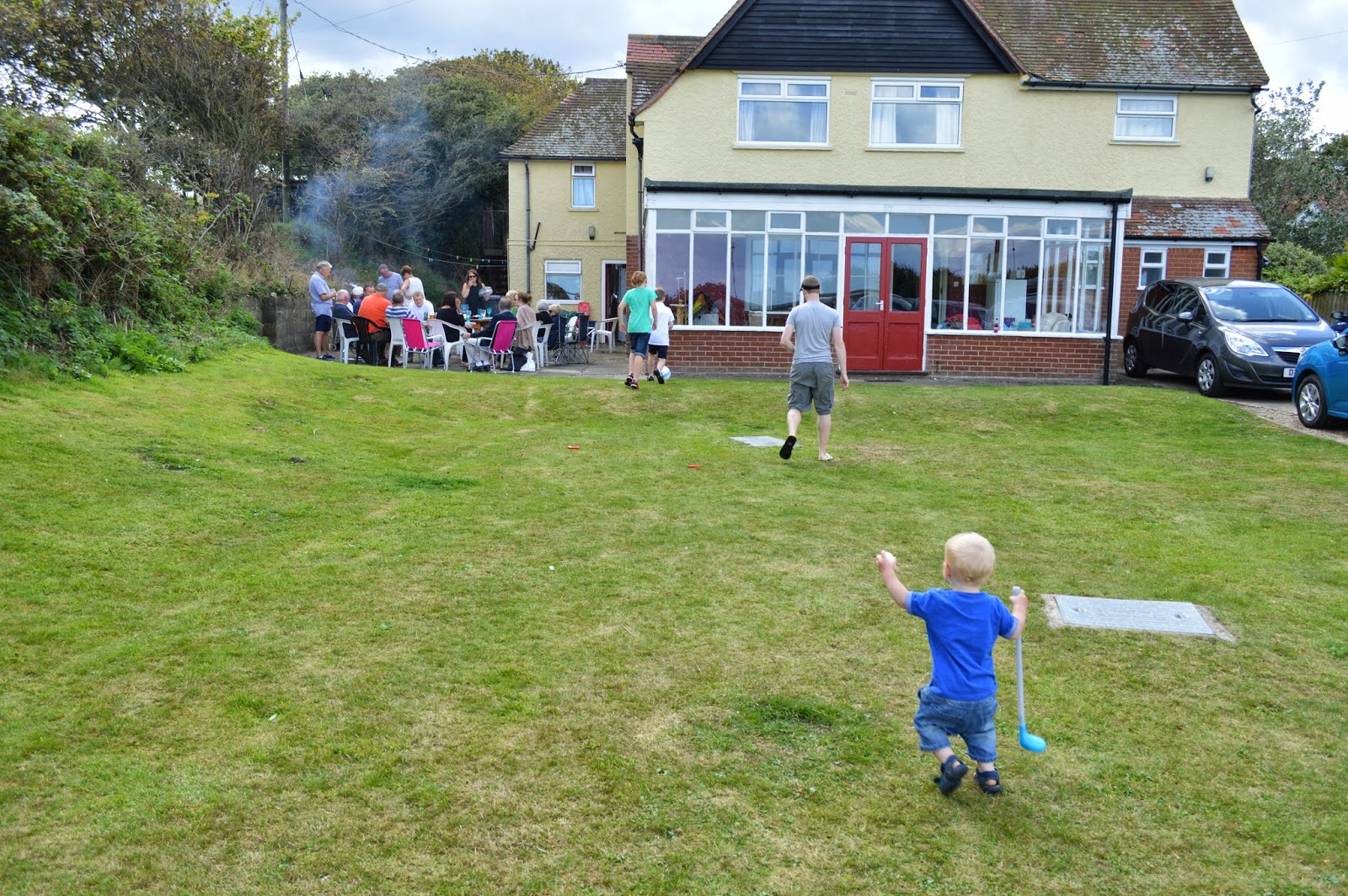 We were fans of the pool table in the conservatory, I think we all challenged each other every night to a game (or three!). There was no Wi-Fi signal, so even though we realised how much we relied on our phones (How do I check the weather?!), it was great to just chill out and hang out with my cousins, or play games. We had two epic games of monopoly during the week. We actually stayed up later than the adults to ensure there was a winner. 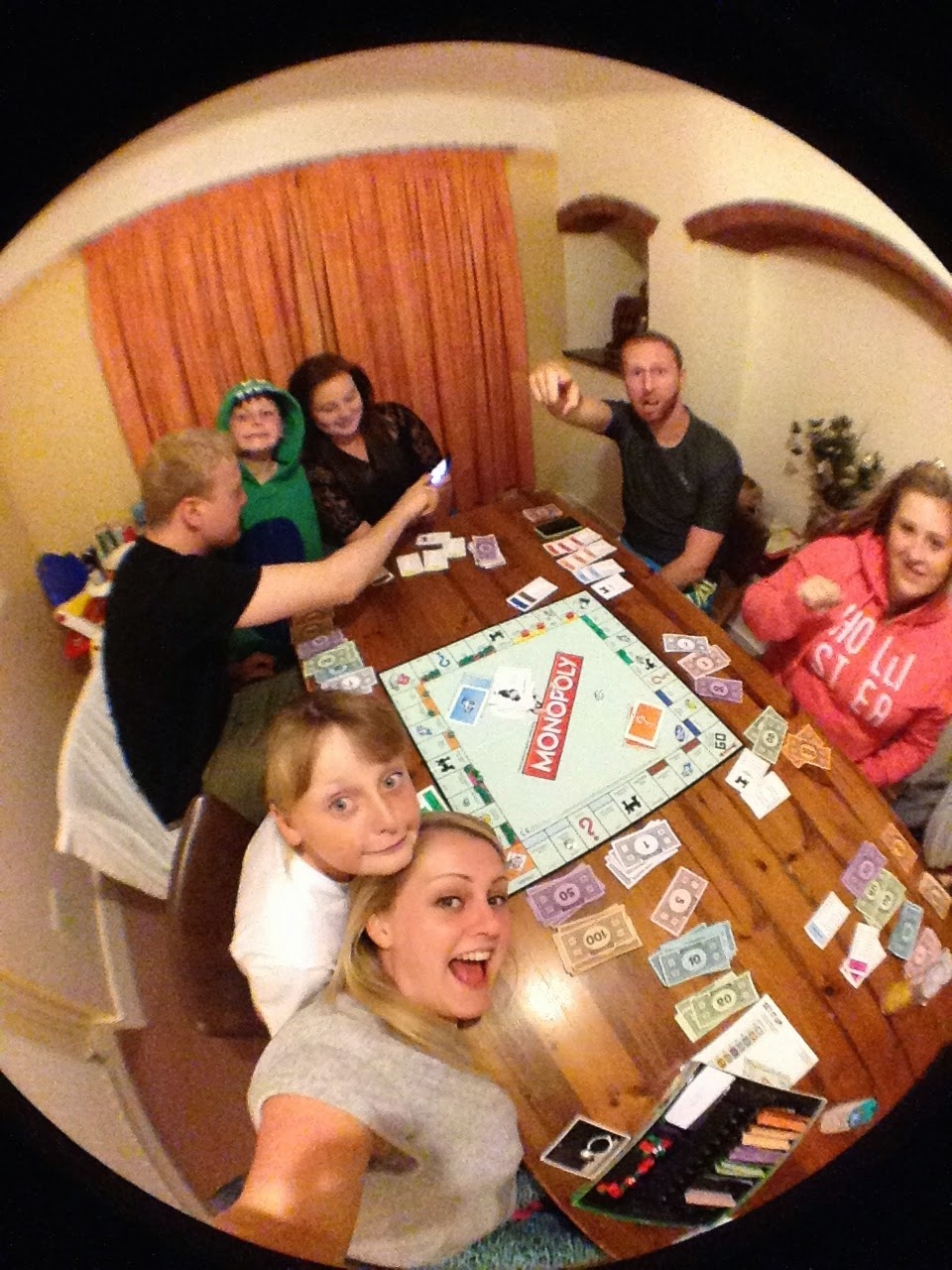 I even got to read a BOOK. My first book since the day before I had a baby. I spent the first couple of days catching up on some much needed sleep and reading. I knew I needed to finish reading my book before the week was up, otherwise I would never have finished it. It's one I bought months back, by my favourite author Jodi Picoult. I love her books, they usually cover a controversial situation and suck you in. Her characters are written in such detail that you will feel like you know them and you can picture what they look like. I used to read about two books a month pre-baby. I love how you can get consumed by a book and go off into dreamland. I know I had some good sleep because I actually had dreams. I used to dream every night but now my mind is running on overdrive and I either don't remember or I don't dream.

The house was right by the beach and the view was amazing. Our local beach is closest to a busy shipping port and the water is less than desirable. This water looked slightly better, like I might actually consider going in it (If it wasn't bloody cold!). 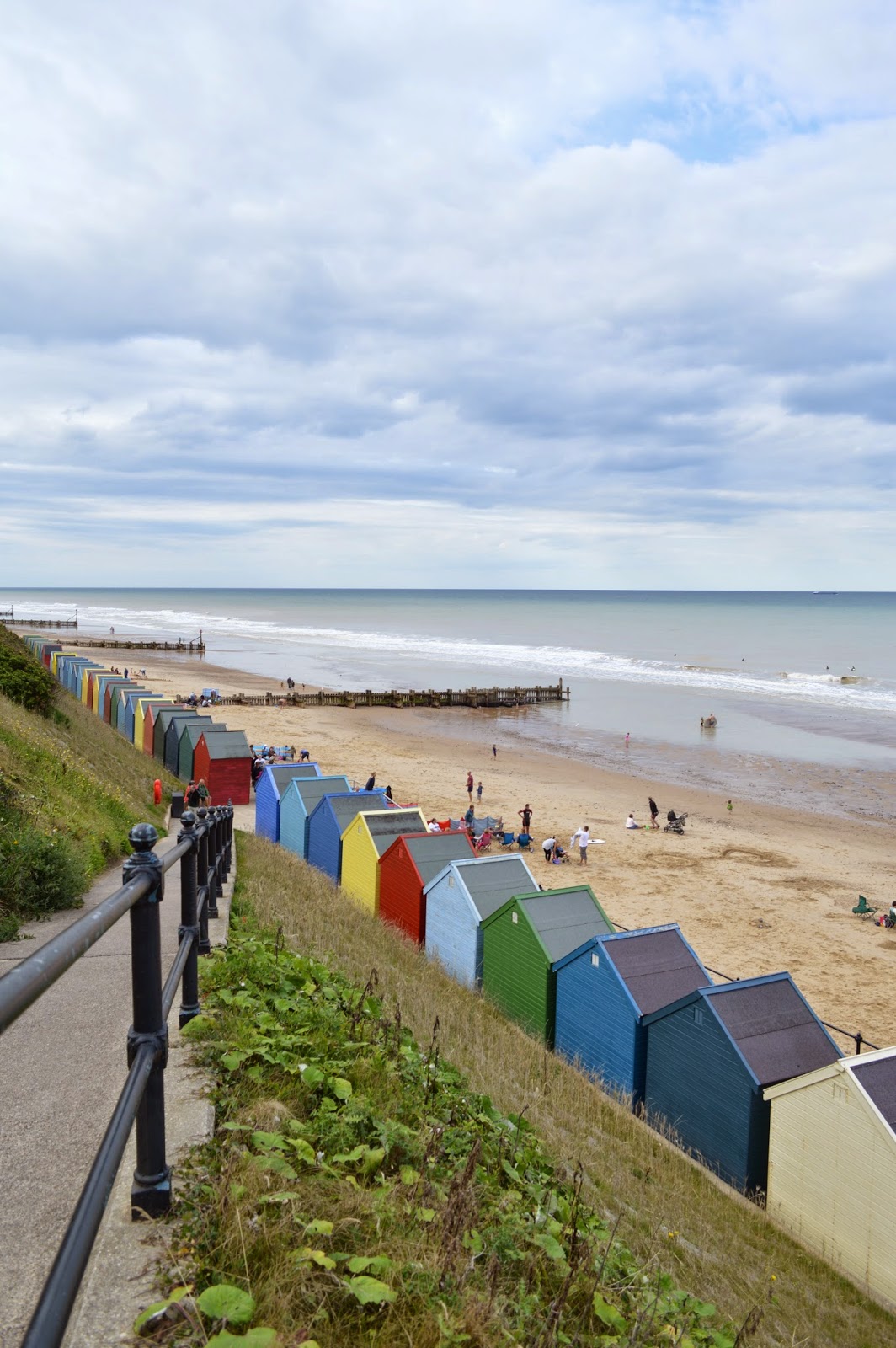 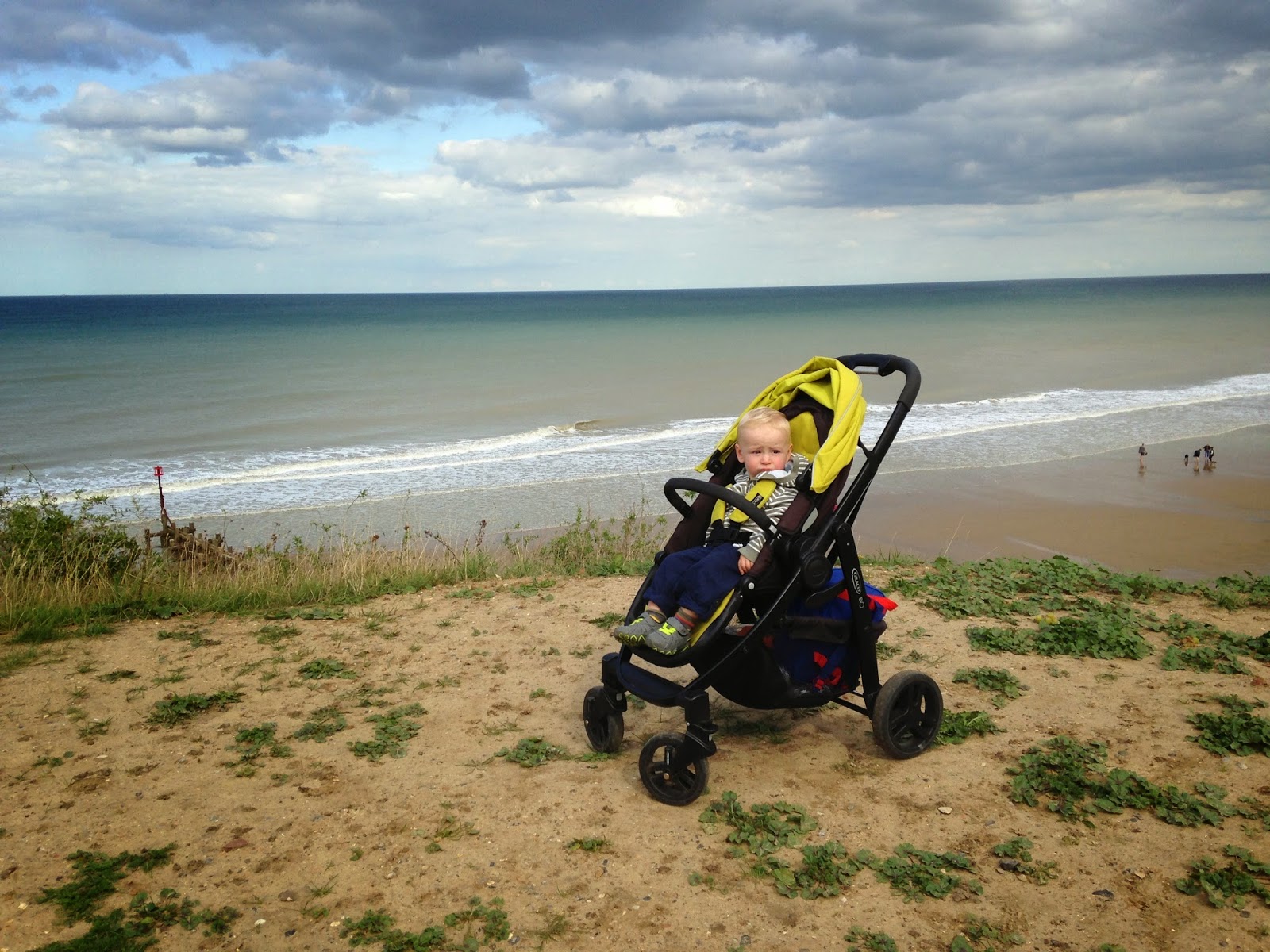 I got LJ to partake in the traditional pram-abanded child look-photo. I made sure the breaks were ON and Ali was just off shot and he wasn't that close to the edge anyway. He doesn't look too happy about the delay in us getting to the beach. We had OK weather all week - a little bit winder than what we'd been experiencing and some rain in the mornings, but we made it to the beach 3 times in the week. 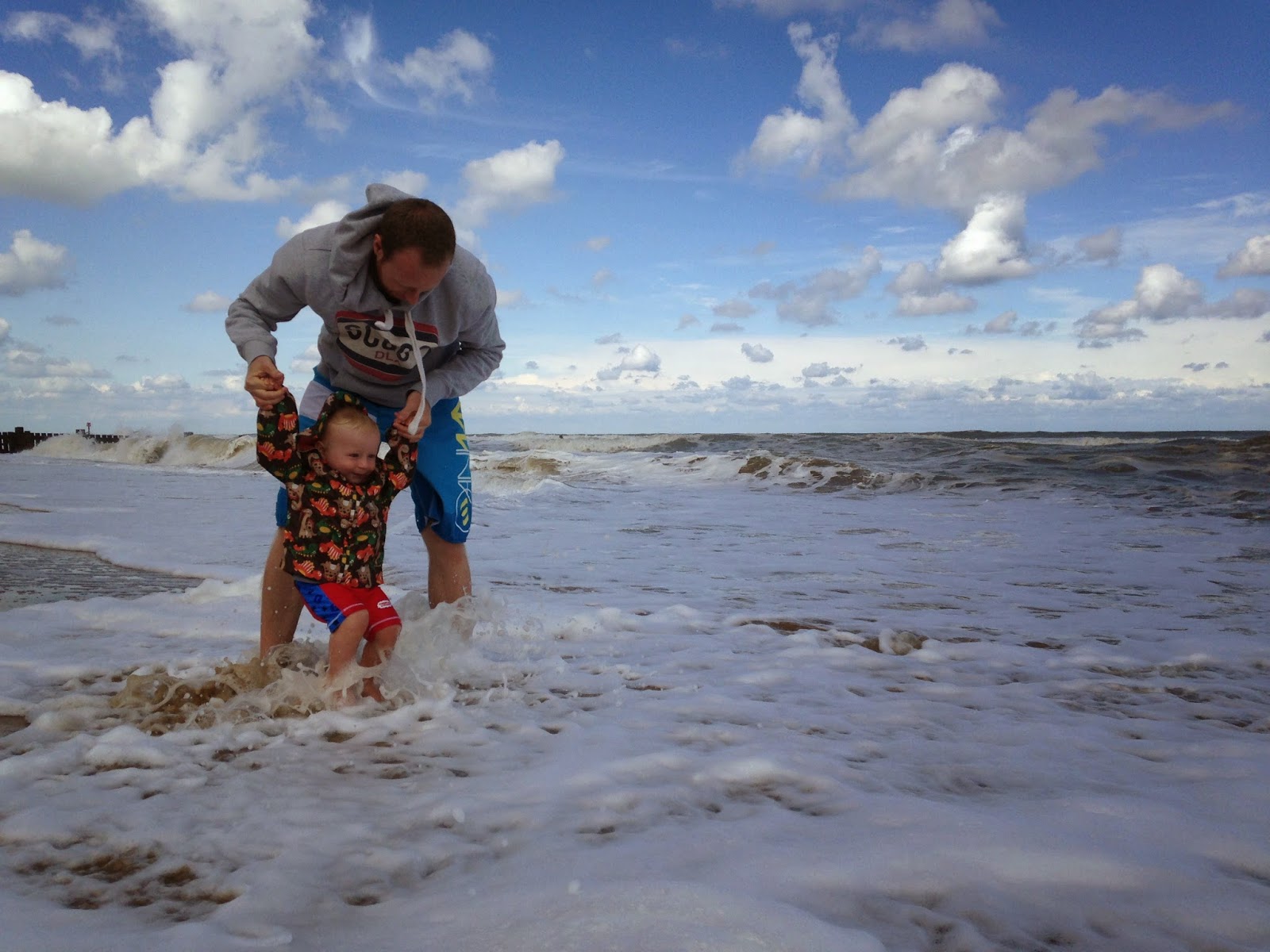 LJ loves the sand and the sea. He was loving the shallow tide and jumping the waves. I'm a little bit less a fan of the beach, too much sand, everywhere. Also taking a baby to the beach is lots of fun and then in one second they can go from - i'm having fun - to - i'm cold and hungry.


The above is a little video of LJ in action testing out the beach. 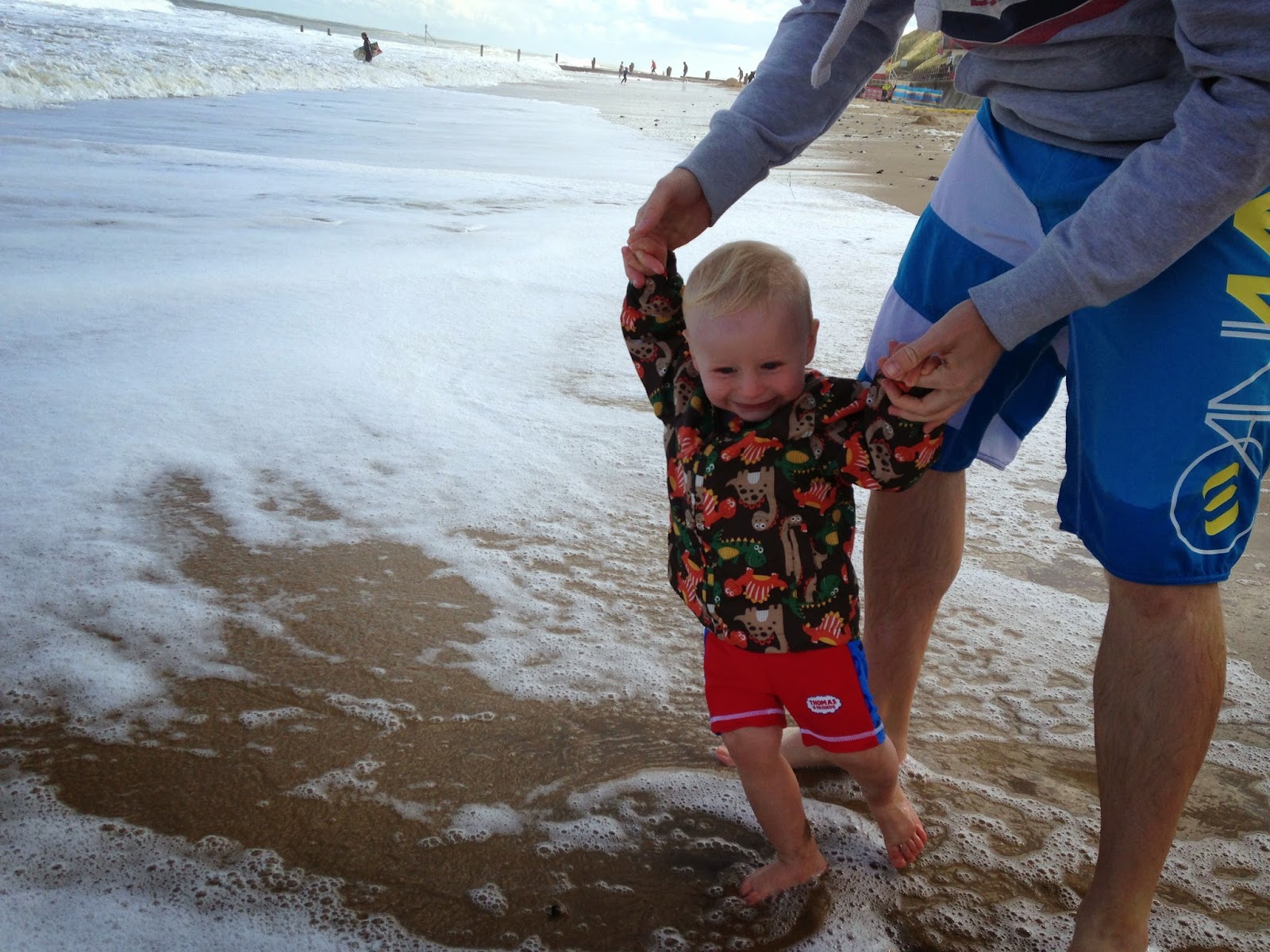 His favourite part was walking into the sea and then being lifted backwards over the waves to 'run away'. The water wasn't too cold (by this I mean it felt like it had come out of an ice machine a couple of hours ago, instead of just now). It's great now LJ is a bit older, because you have to worry less about them getting extremely cold. Even though the photos look like it was a miserable day, it was really just the wind that was strong, which is why we are in jackets. We spent some time building sandcastles (well trying!) and LJ loved using his spade. He made it his mission to destroy any castle that looked remotely like it might pass for a castle and ensured you used whatever bucket/spade he gave you. 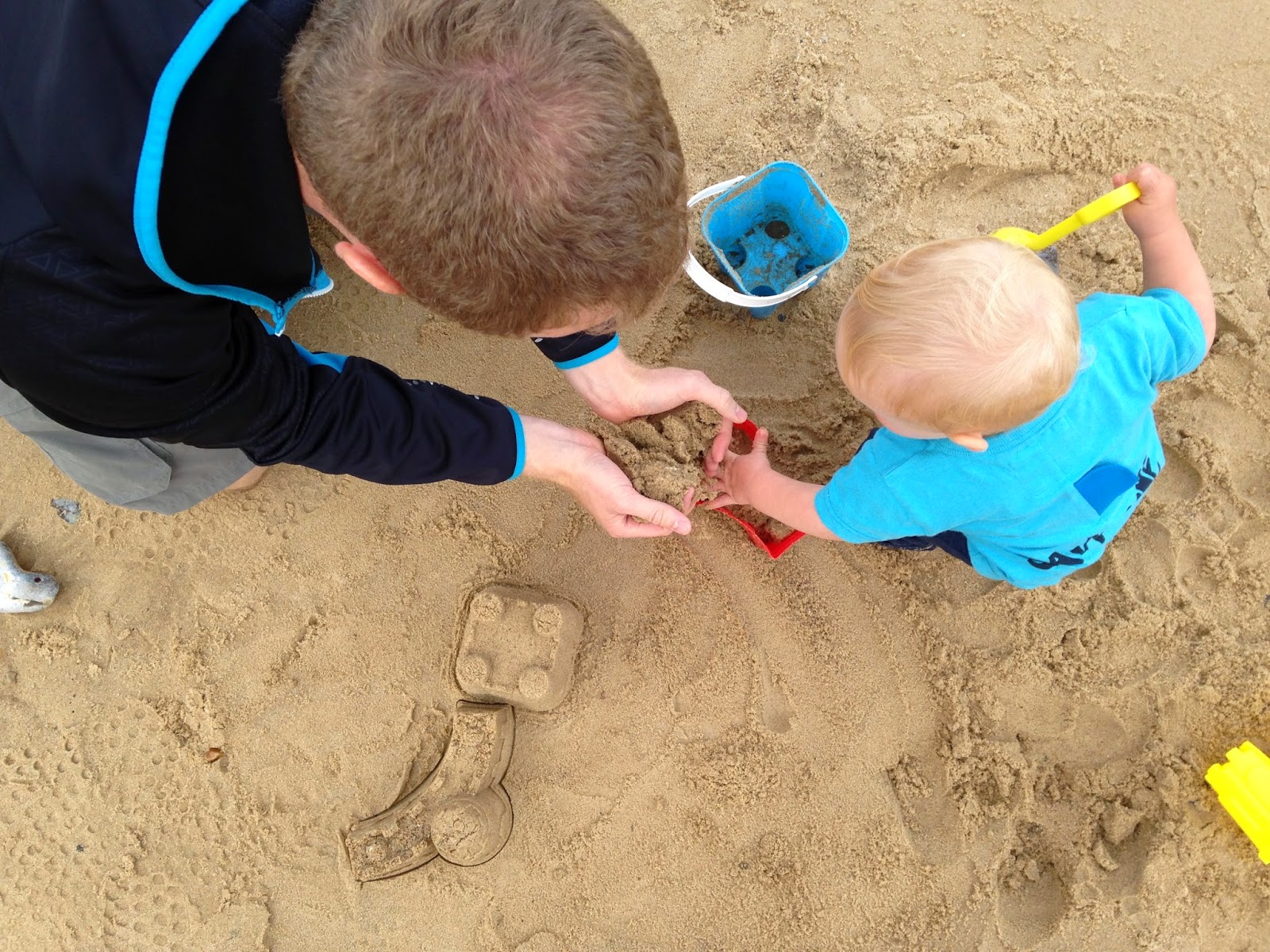 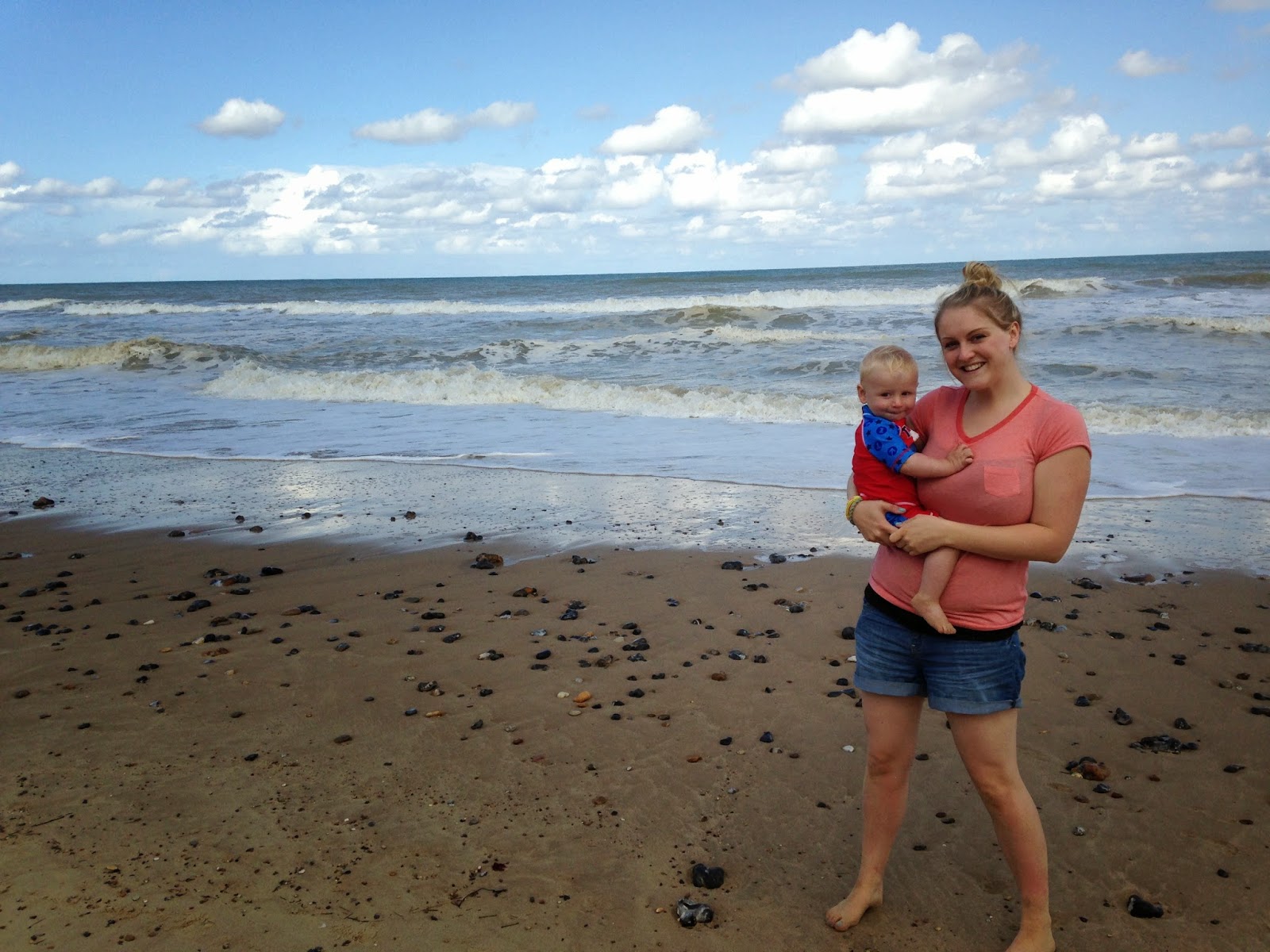 It was a much nicer day when we went to the beach later on in the week. I tried to jump in some photos, mainly to remind LJ that mummy was there too. Luckily my cousins are super at taking a photo when I ask them too and I have some mummy and LJ moments caught on camera from this holiday. 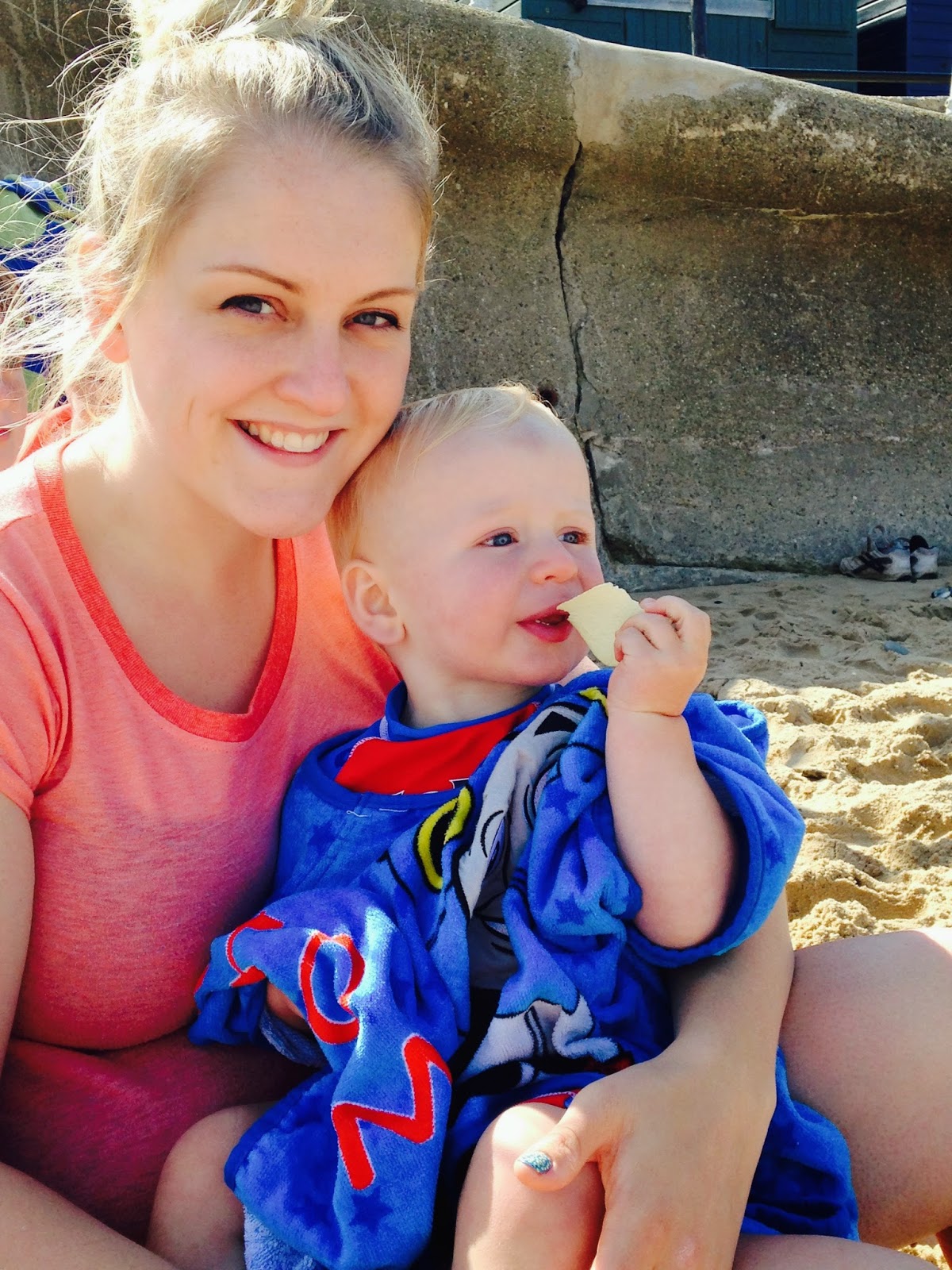 Remember how I said LJ's favourite bit about the beach was the sea? Well actually, it might have been the food after the sea. He got to try out a lot of foods that he wouldn't normally have!  I figured he was on holiday and as long as it wasn't going to hurt him then he could have it. Safe to say that once he popped he just couldn't stop with the pringles on the beach. 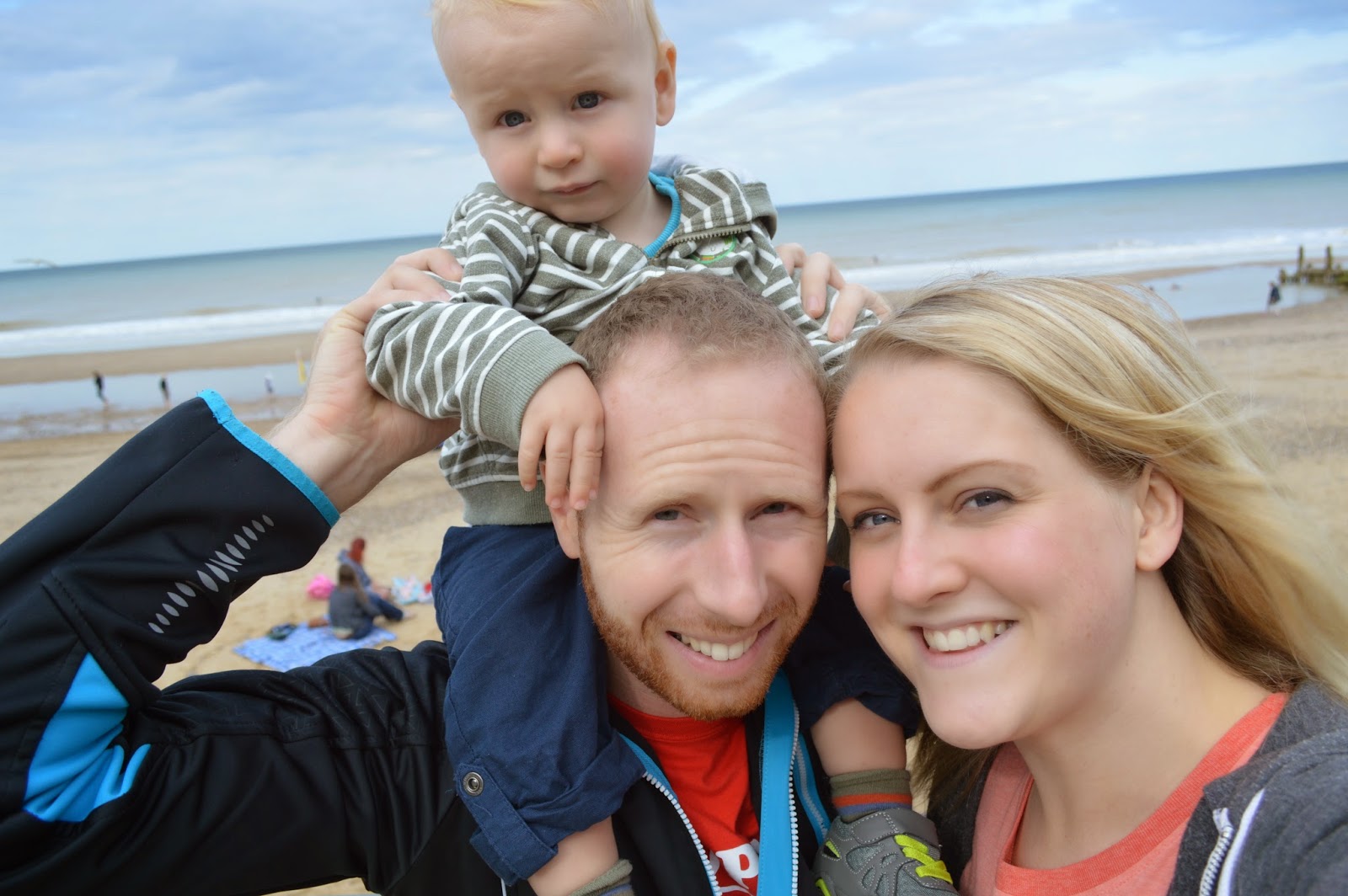 We also attempted some family selfies from the holiday! LJ already looks like he's done with a camera being shoved in his face and he's only a year into his life this life. 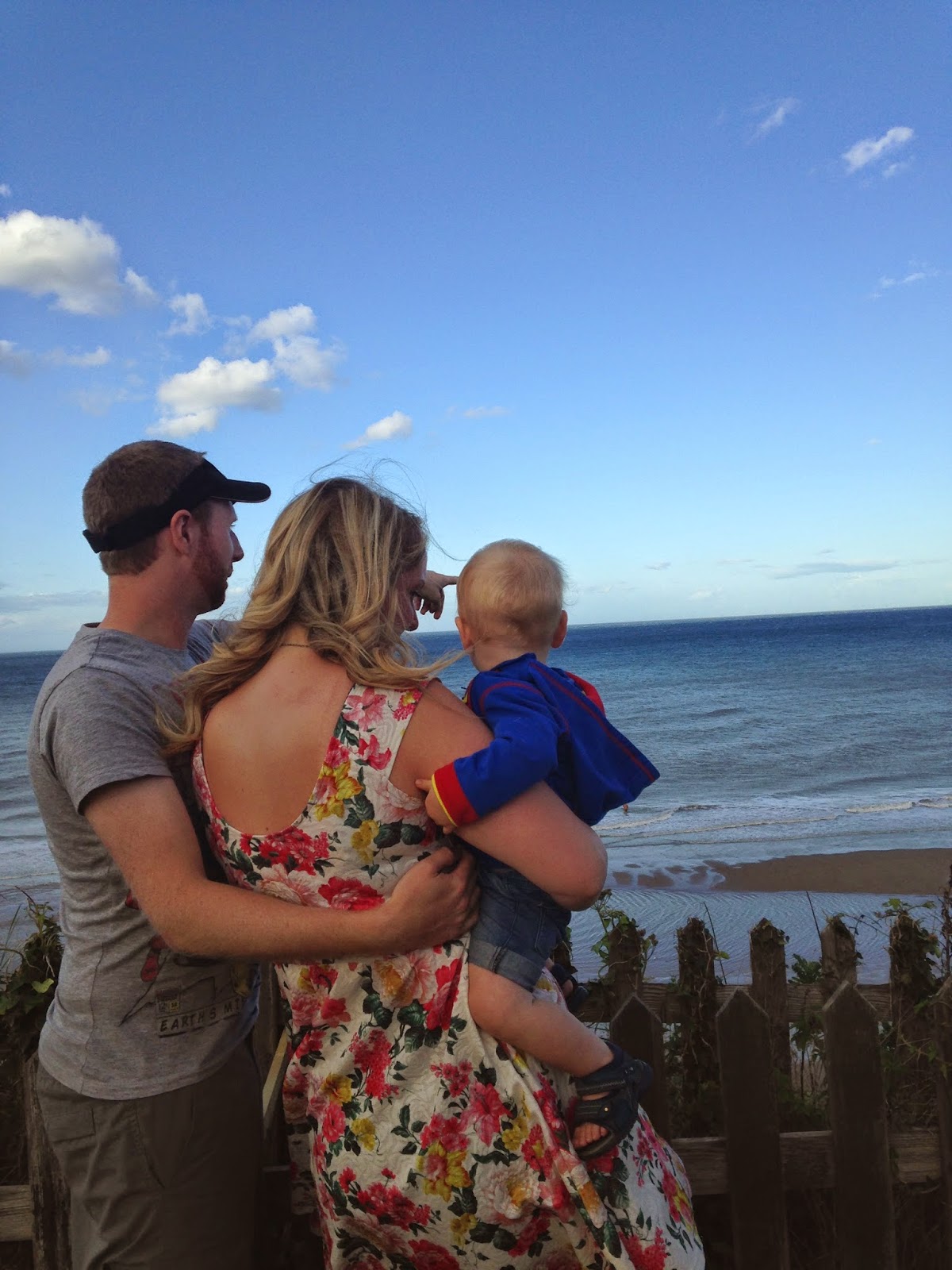 My cousin snapped this one on a late afternoon walk. I think we were showing him ships on the horizon, I'm not sure he cared. 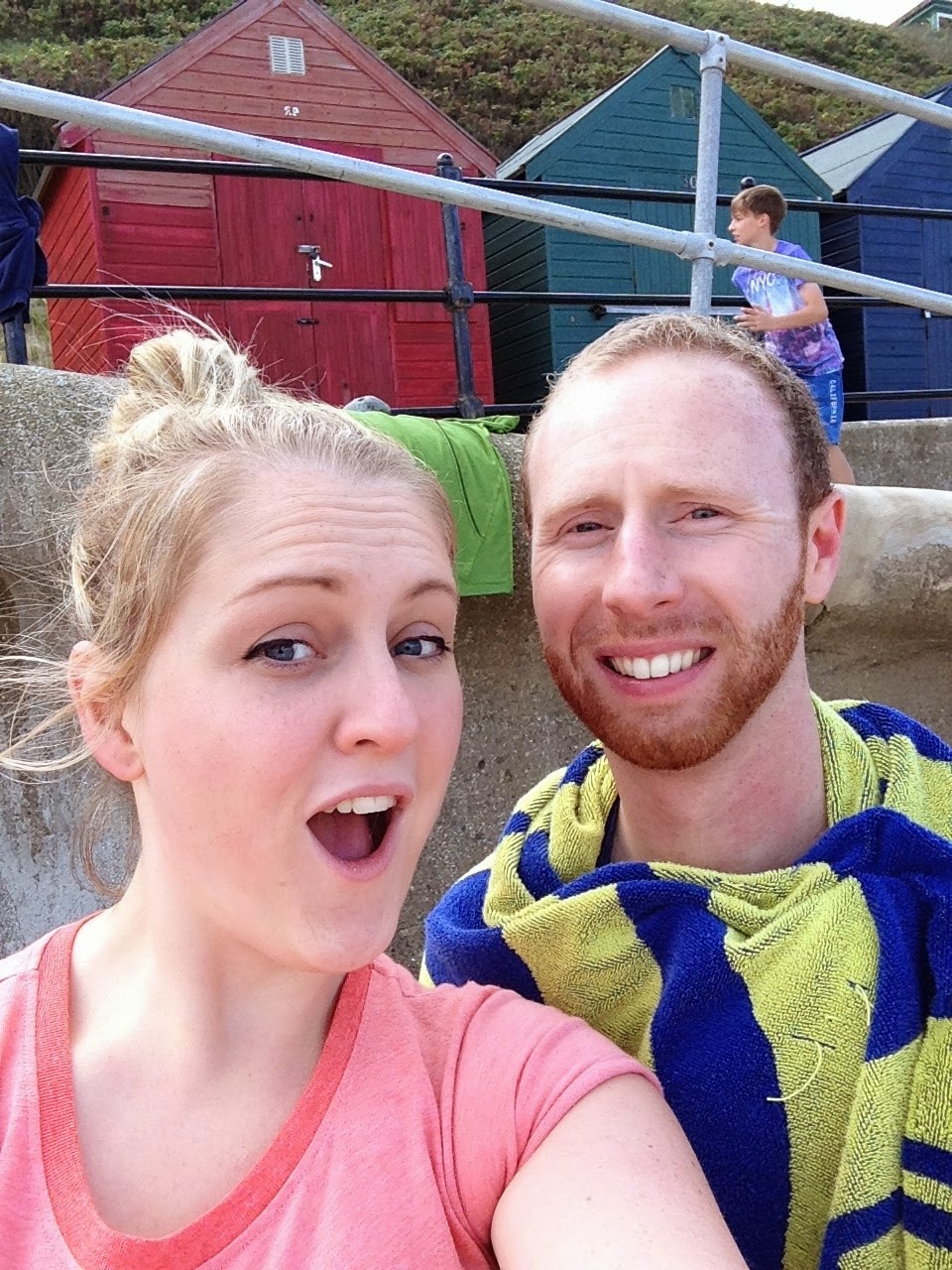 This crazy guy made a bet with some of my cousins that they would all go in the sea. 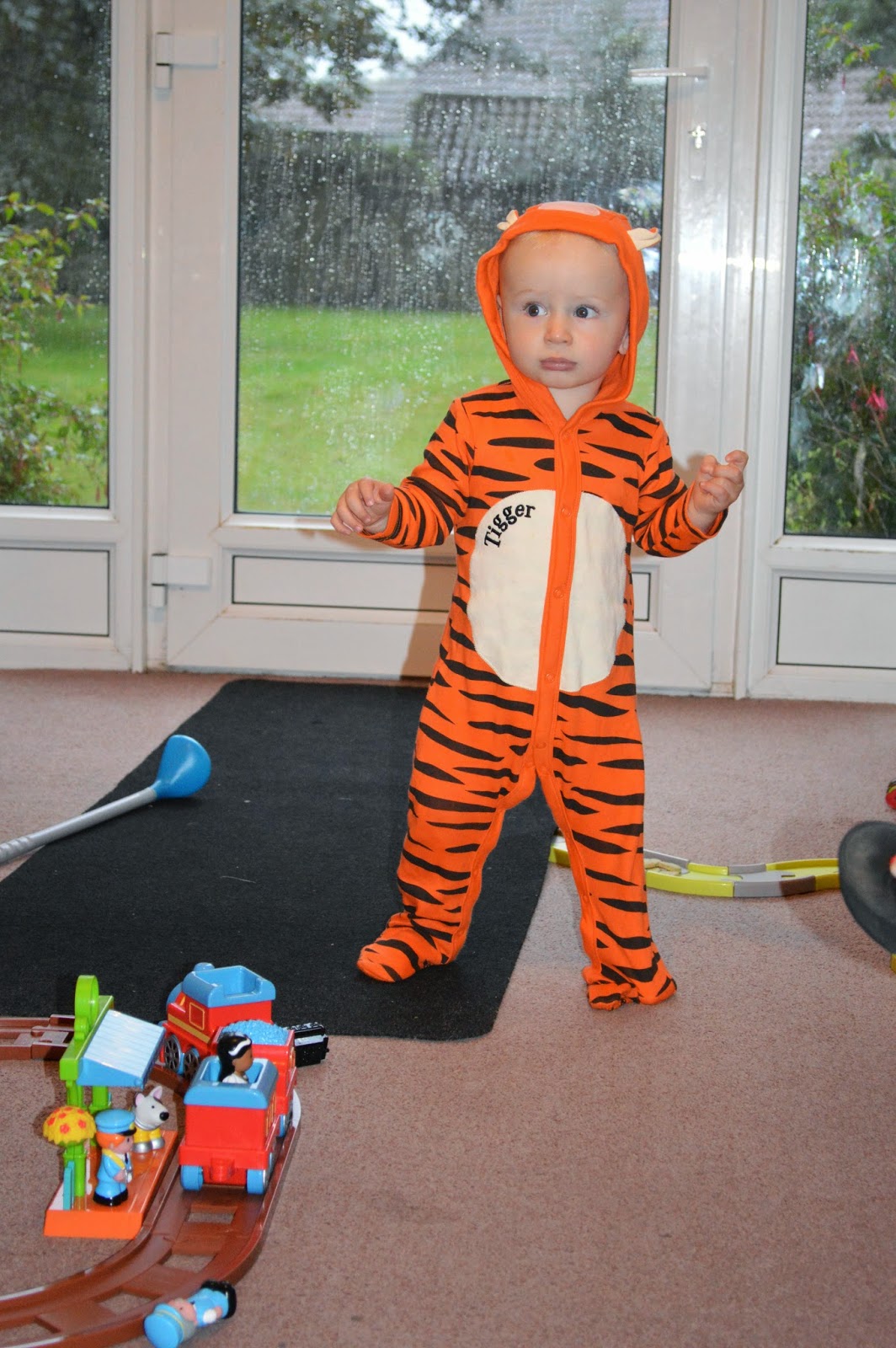 I found a solution to my problem of how I was going to put my ever growing baby into the Tigger suit one last time. Turns out, a Tigger onesie is the perfect outfit to put on after you finish playing in the sea. It also means that mummy and all your family will want to pick you up and cuddle you ALL THE TIME. 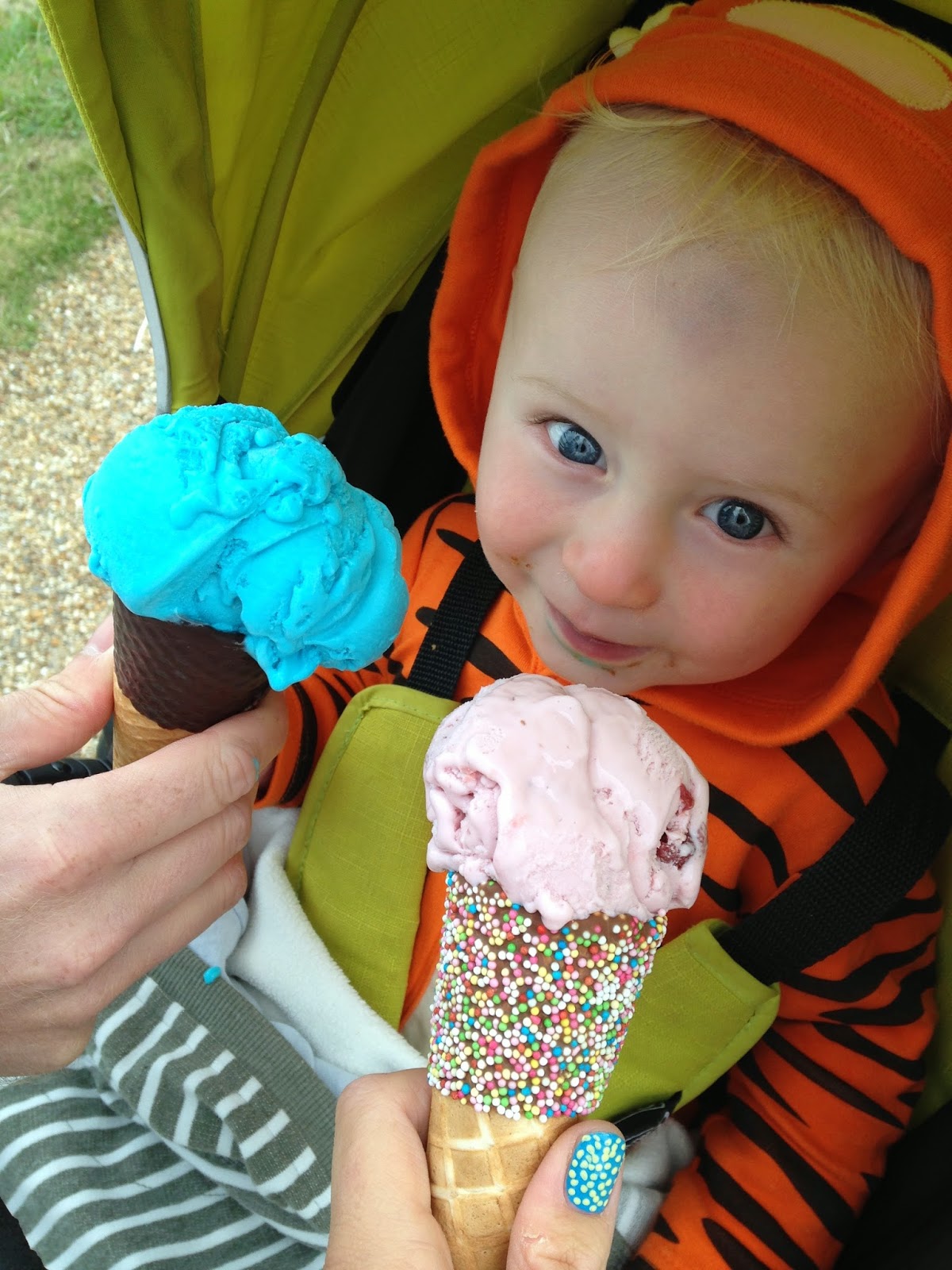 Oh, remember what I said about tasting food he doesn't normally have? 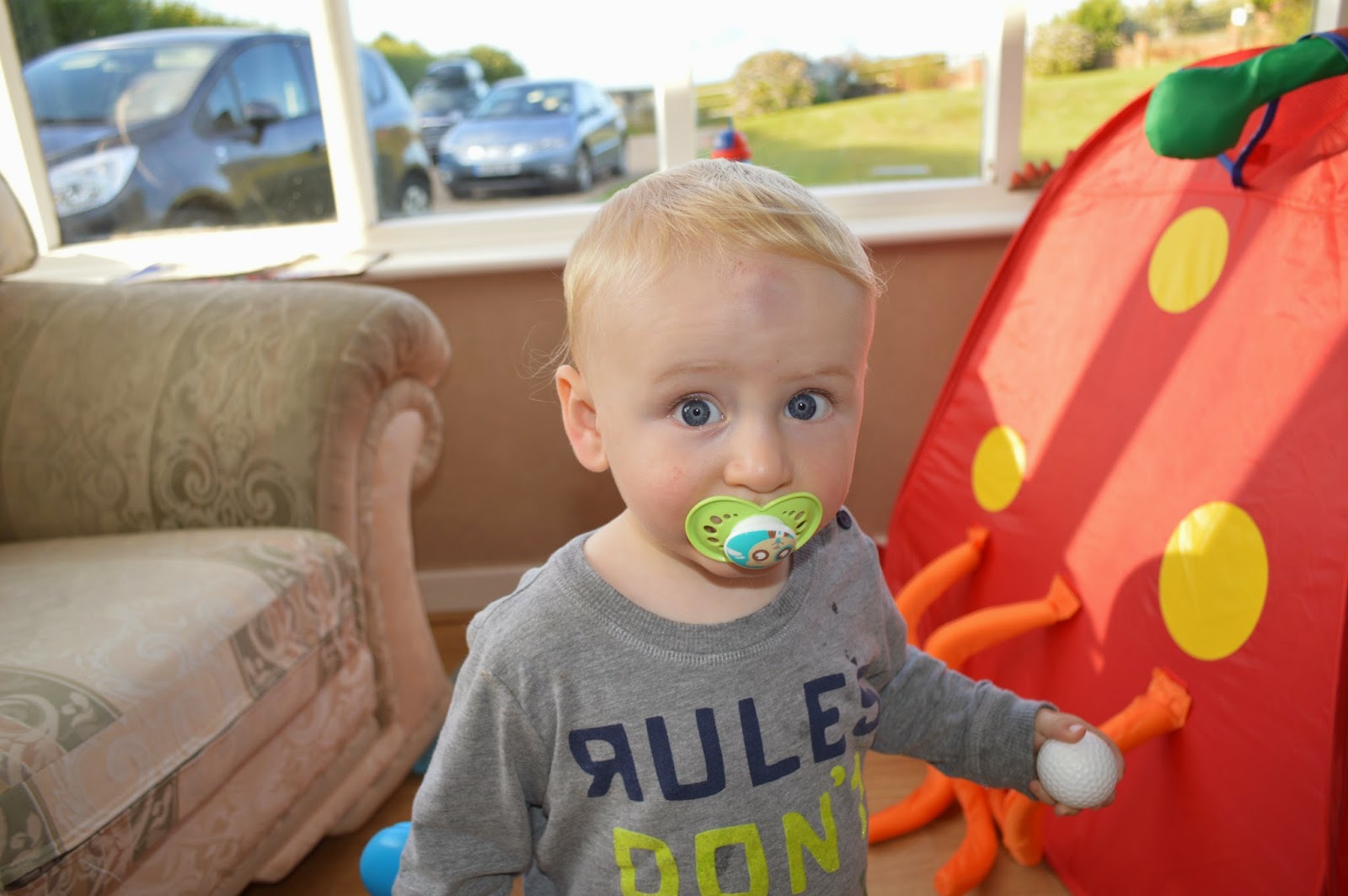 In case you were wondering if that was a huge bruise on LJ's head. Yes, you are correct. LJ  bumped his head, not one, but three times on holiday. It was the first time he's had a real bump and he looked like he might grow some kind of horn there. First was laying out into a wooden sideboard, second was falling flat on his face off the edge of the sofa and third was bumping his head on the headboard of our bed during his normal acrobats of 5am wake up calls. He was fine, a little cry and back to golfing and being a terror.

LJ is really into his golf. He loved the big garden on holiday as it allowed him to really practice how to run around with a golf club. 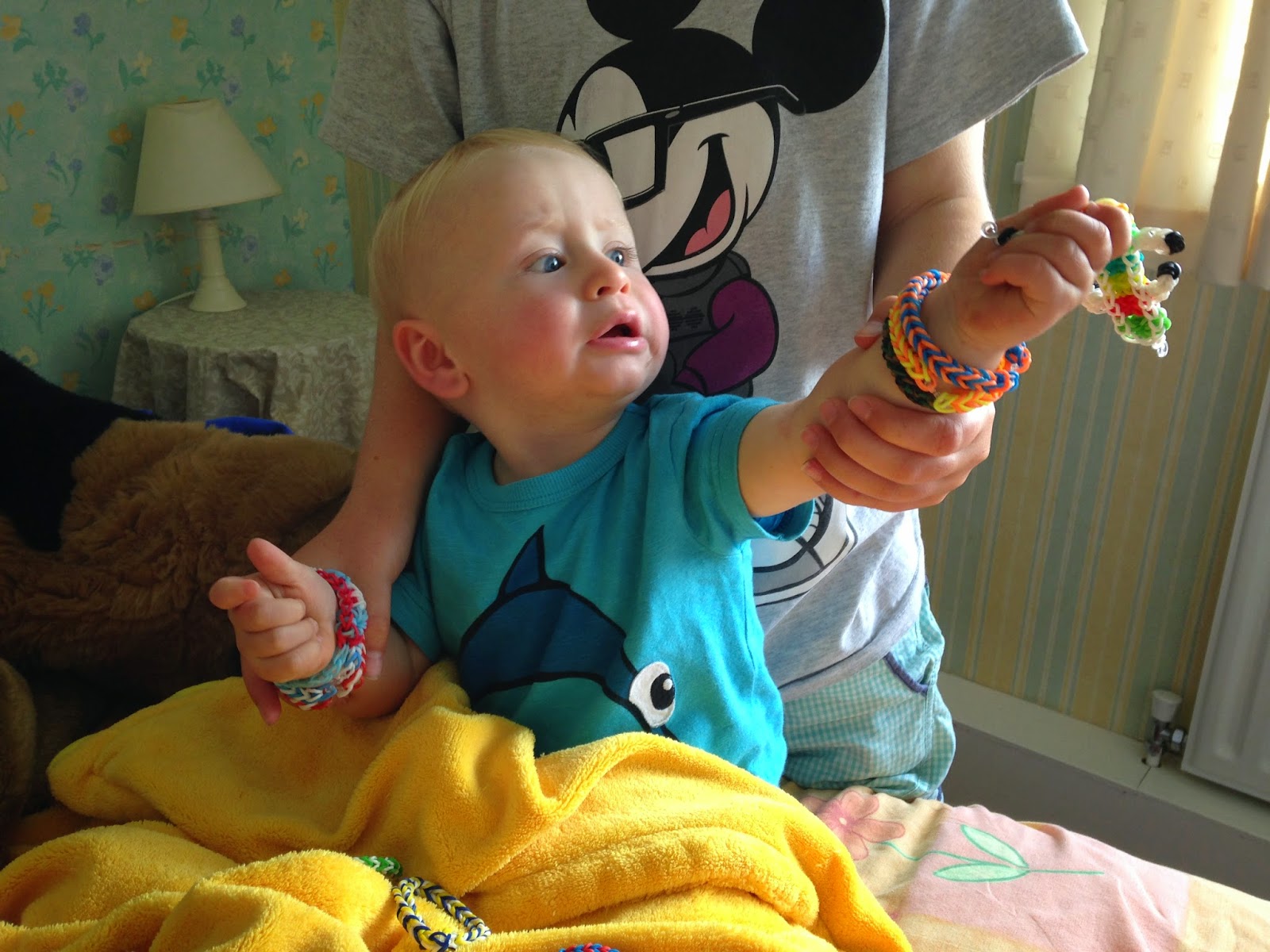 LJ also realised that his cousins were all addicted to loom bands. He became a model for them during the week to show off their new creations. Disclaimer - Yes i've read the loom band horror stories, no he was never unsupervised, no he wore them no longer than 5 minutes at a time. 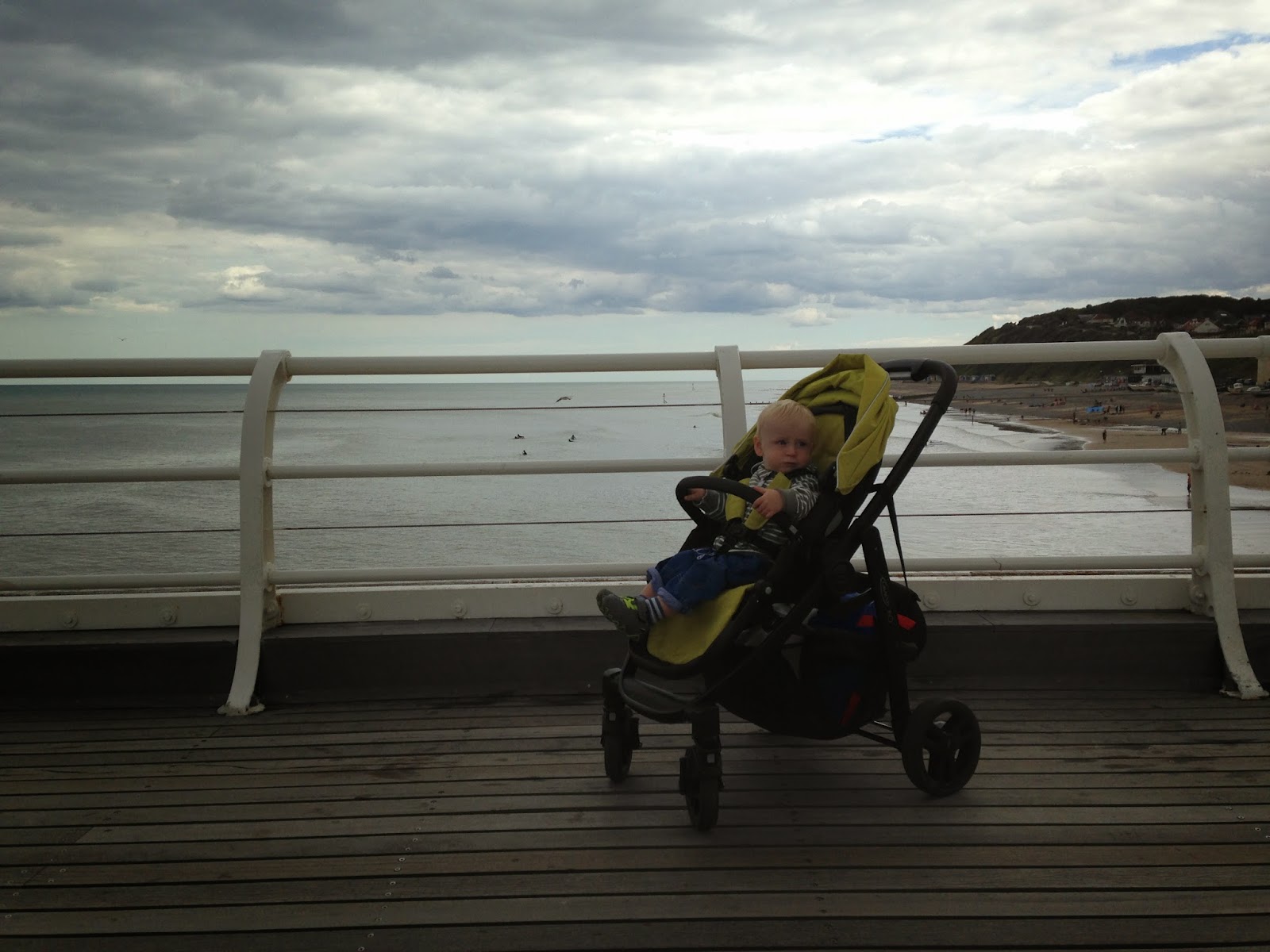 We visited Cromer on one of the days as it was only a short distance from where we were staying. LJ had his traditional pram-with abandoned child- pose on the pier. I'm not normally freaked out by heights but I was a little weary about being on the pier when I could see through the planks beneath my feet. We let LJ free from the pram and held on to him for dear life. He enjoyed peering in people's crabbing buckets to see what they had and watching the waves below his feet. 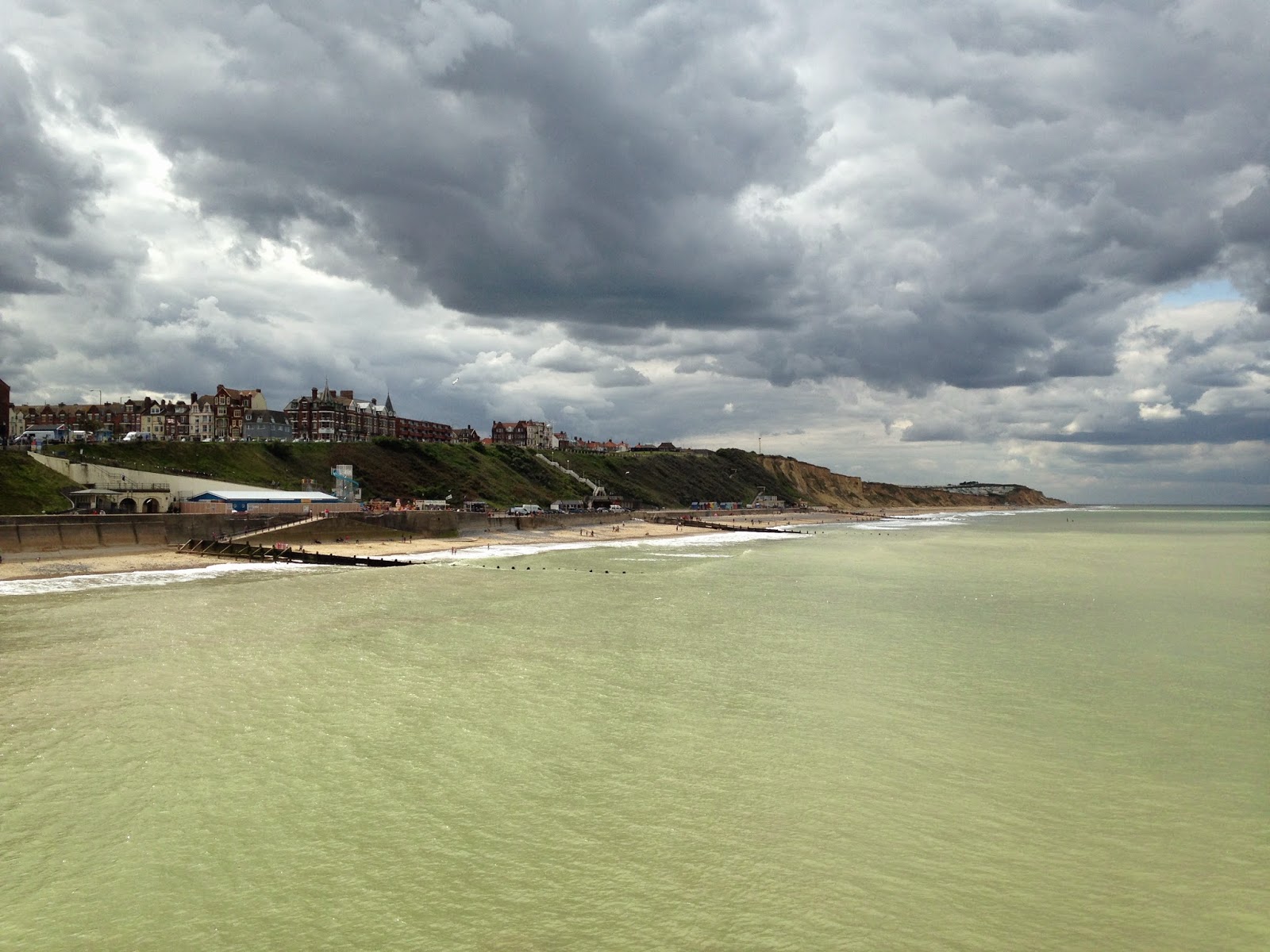 It was a great experience to get so far out to sea without being on a boat. The weather was strange that day, very cloudy and dark but when a section of sunshine got through, it made the sea a very green colour. 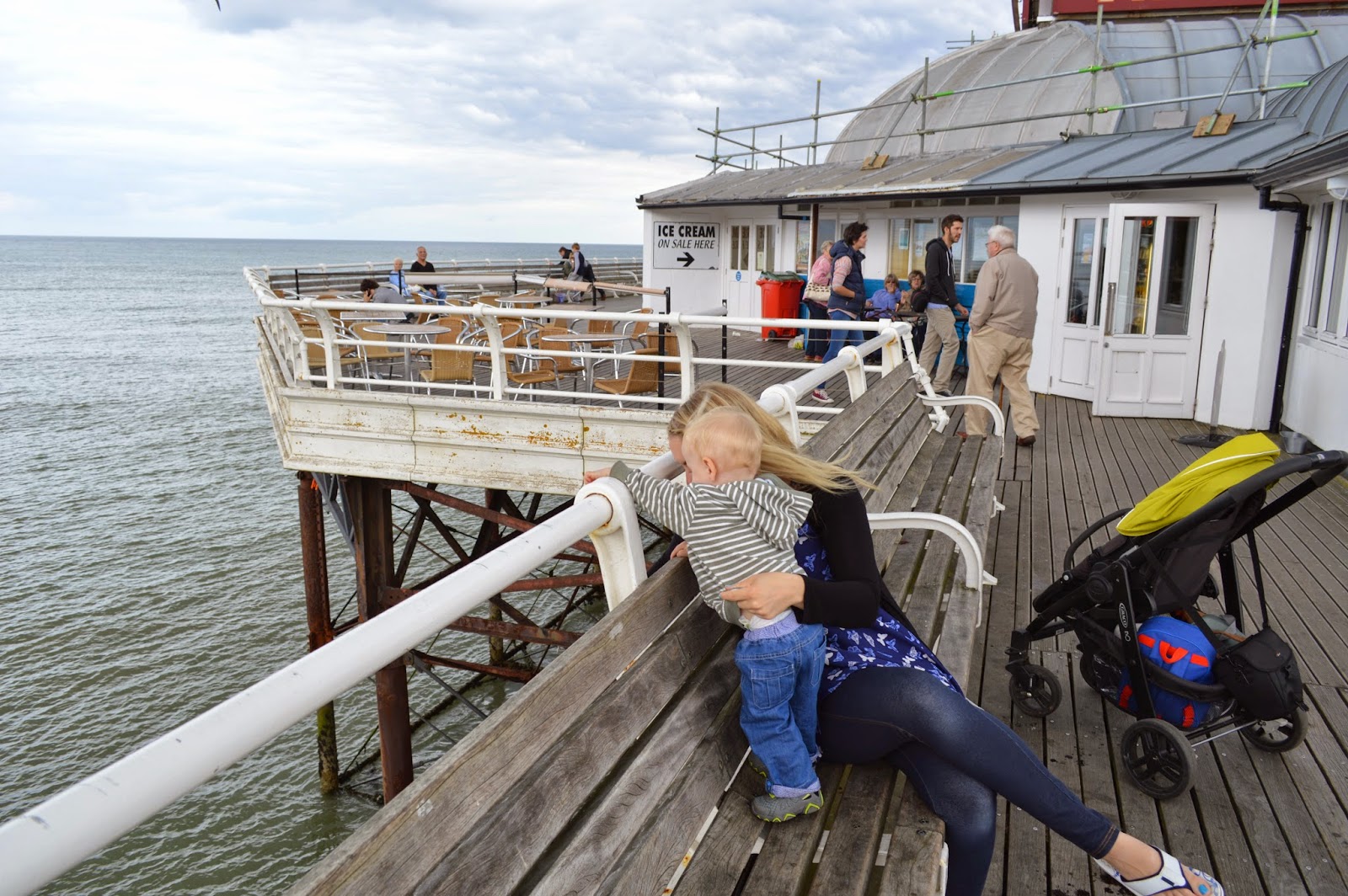 LJ and I watched the sea moving below us and saw everyone's crabbing lines dangling down. It was the same week as the cromer festival and so I expect it was busier than normal. We got to hear a samba band playing from the pier and the hustle and bustle of the seaside town. 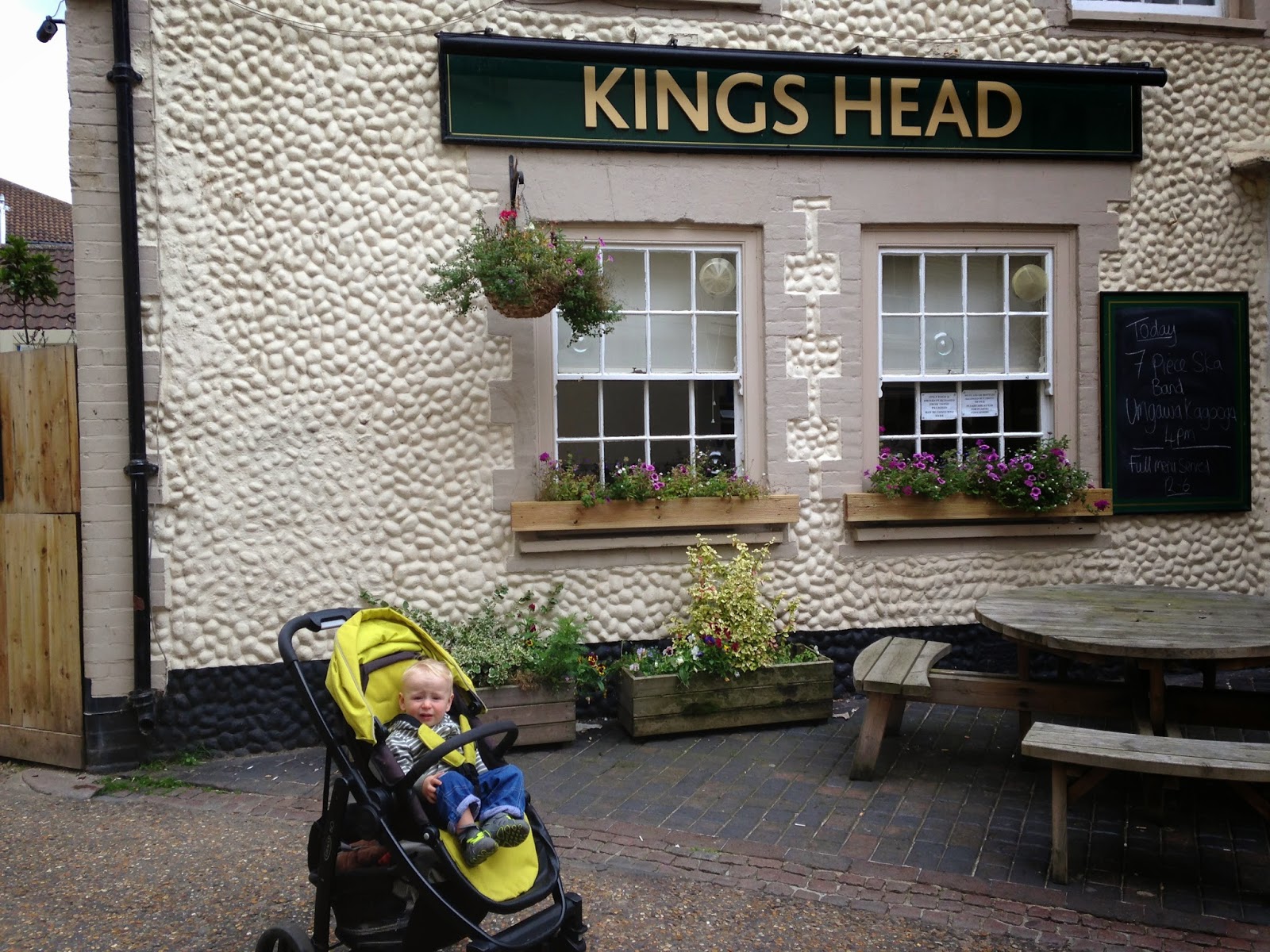 We also found LJ's pub!
What? You don't take pictures of your kids looking abandoned outside pubs related to a name? 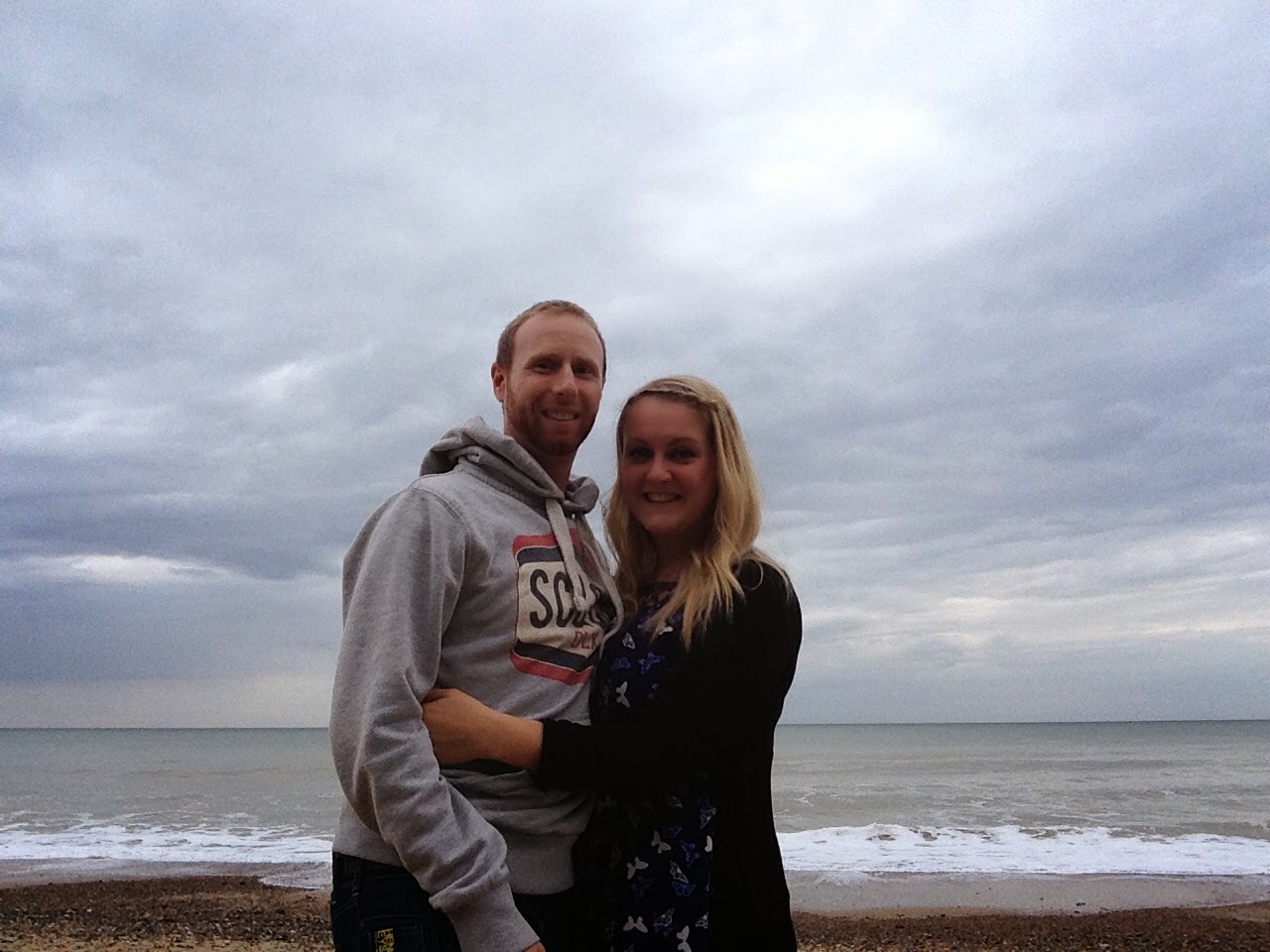 Finally, my family kindly watched LJ for an evening and Ali and I went on a date night! We walked along the empty beach and chatted while we wait to go to the restaurant for our meal. We jumped down onto the (cold!) sand and set a picture for self timer. It was a nice evening but we did have to wait an hour for our food. Luckily it was good food and we needed it as we both seemed tipsy after one beer for him and one wine for me! (We don't get out much these days!).

It was a lovely holiday and the whole family enjoyed seeing each other every day. I know LJ missed his big cousins when he got back home. He came back learning some new skills from copying the older kids and I think he grew up loads before my eyes too! 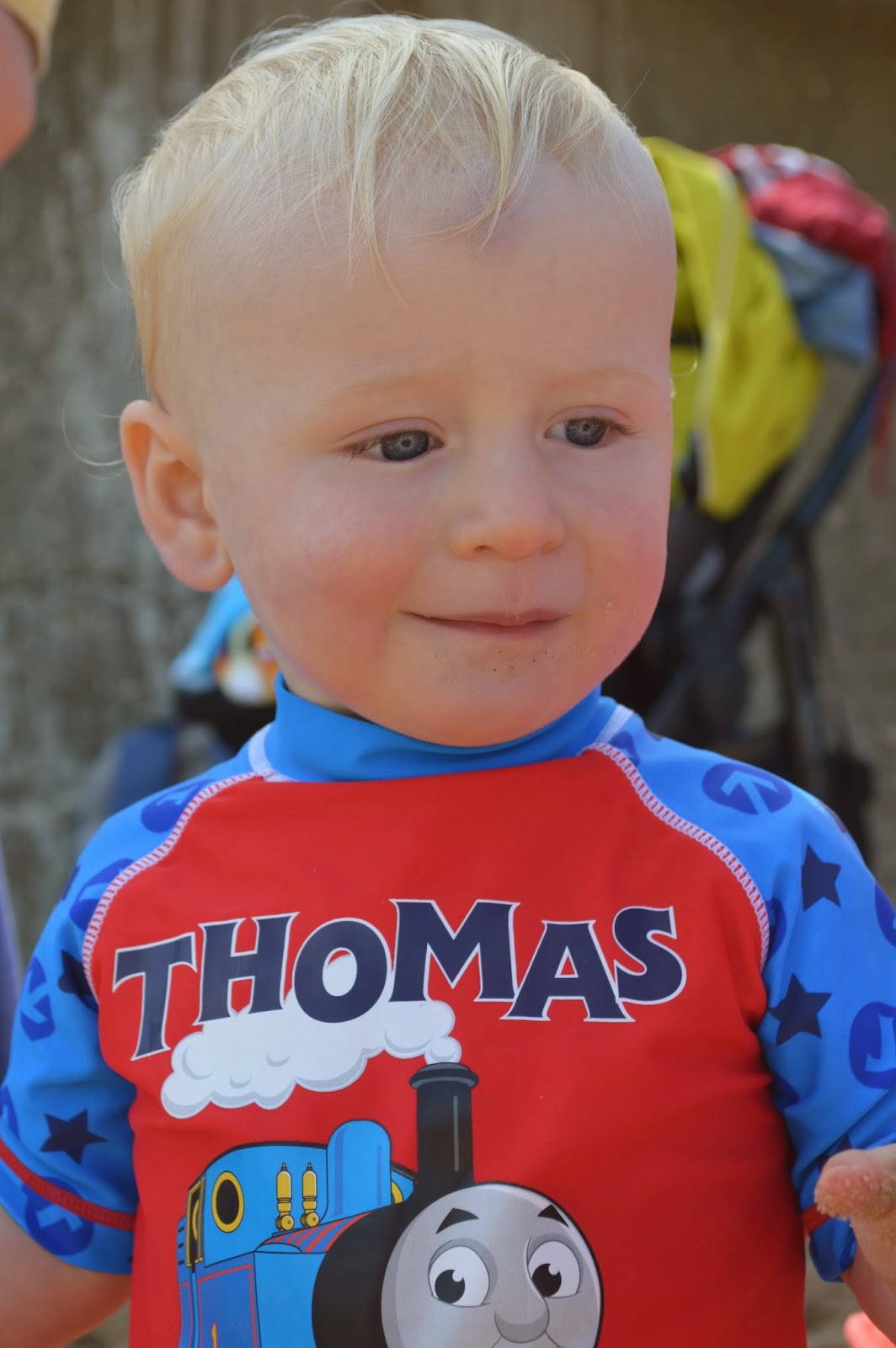