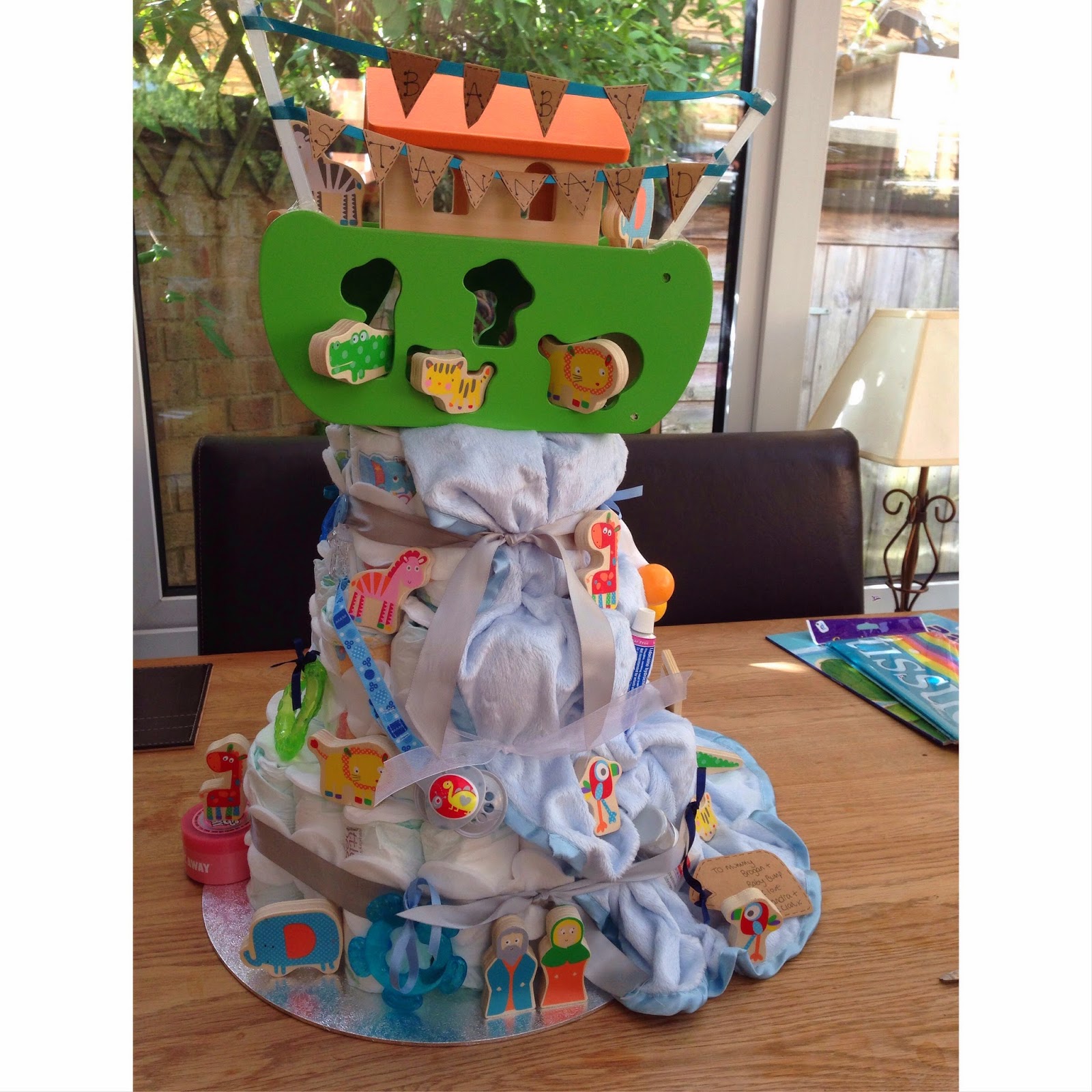 Hello.
I'm fully aware it's been like two weeks since the last update. To be fair, i've had this post created and the photos uploaded waiting to write for the last two weeks, but i've just not had the time. I've actually been busy, really busy. I'm not sure whether it's because the summer months are coming up and people do more, or if i'm just (stupidly) filling up all my spare time and still trying to keep a blog up to date.

So remember back to the last bank holiday? That's what this post is about. 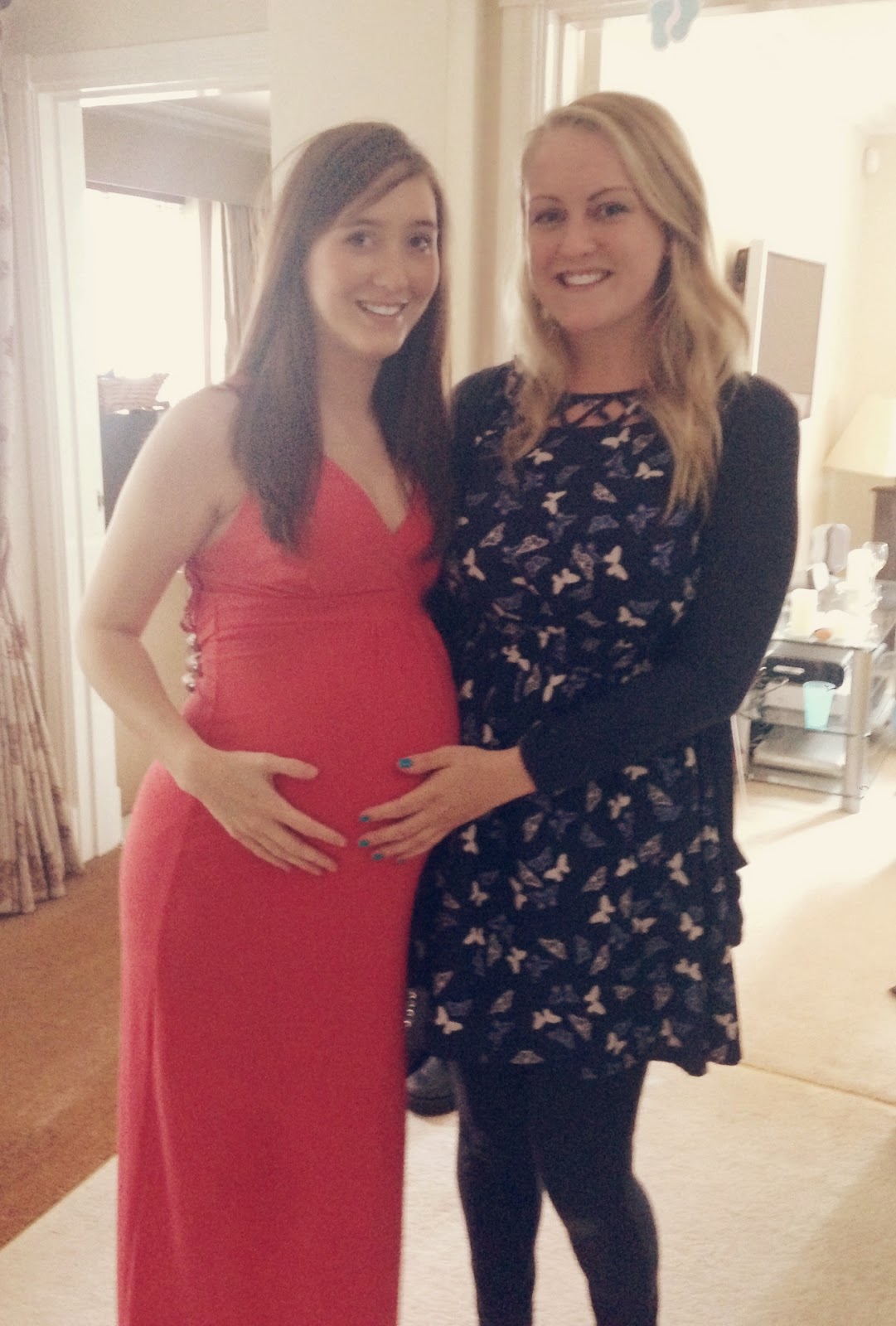 I got to spend the Friday morning making a baby shower cake for my friend for her baby shower on the Saturday. Now not only was it fun doing the cake, but I also managed to sort it all in one sitting because I was at home and baby free! LJ had a trial session with the childminder and it was on one of my days at home. I must admit, I did keep listening out for a non existent baby monitor for a baby to wake from a nap he wasn't having.

I do a different twist on each cake I make depending on the mummy. My friend has Noah's ark themed bedding in the baby's nursery, so I managed to find this lovely Noah's ark play set from Sainsburys and then I based the rest of the cake around it. The blue baby blanket is supposed to be like the sea and it goes down one side of the cake so that you can still see the nappies on the other side. I filled the middle with my favourite brand of baby bath bubbles - mum and me baby snuffles and my favourite brand of beaker - Tommee Tippee easy drink cup. This mummy-to-be is very well prepared for her baby! So I used size 4 and 5 nappies and I just picked up a couple of things that might not be first on the new baby list, like teethers and Bonjella and hand gel. Not forgetting a handy dummy clip (because the amount of people who had to learn fast to catch a rouge dummy from LJ's mouth while holding him was crazy) and our favourite brand of dummy's - MAM, in the 6m+.

It's crazy that this time last year, we were celebrating my baby shower and we had the same photo as above but with her hands on my belly! Apparently it's catching... 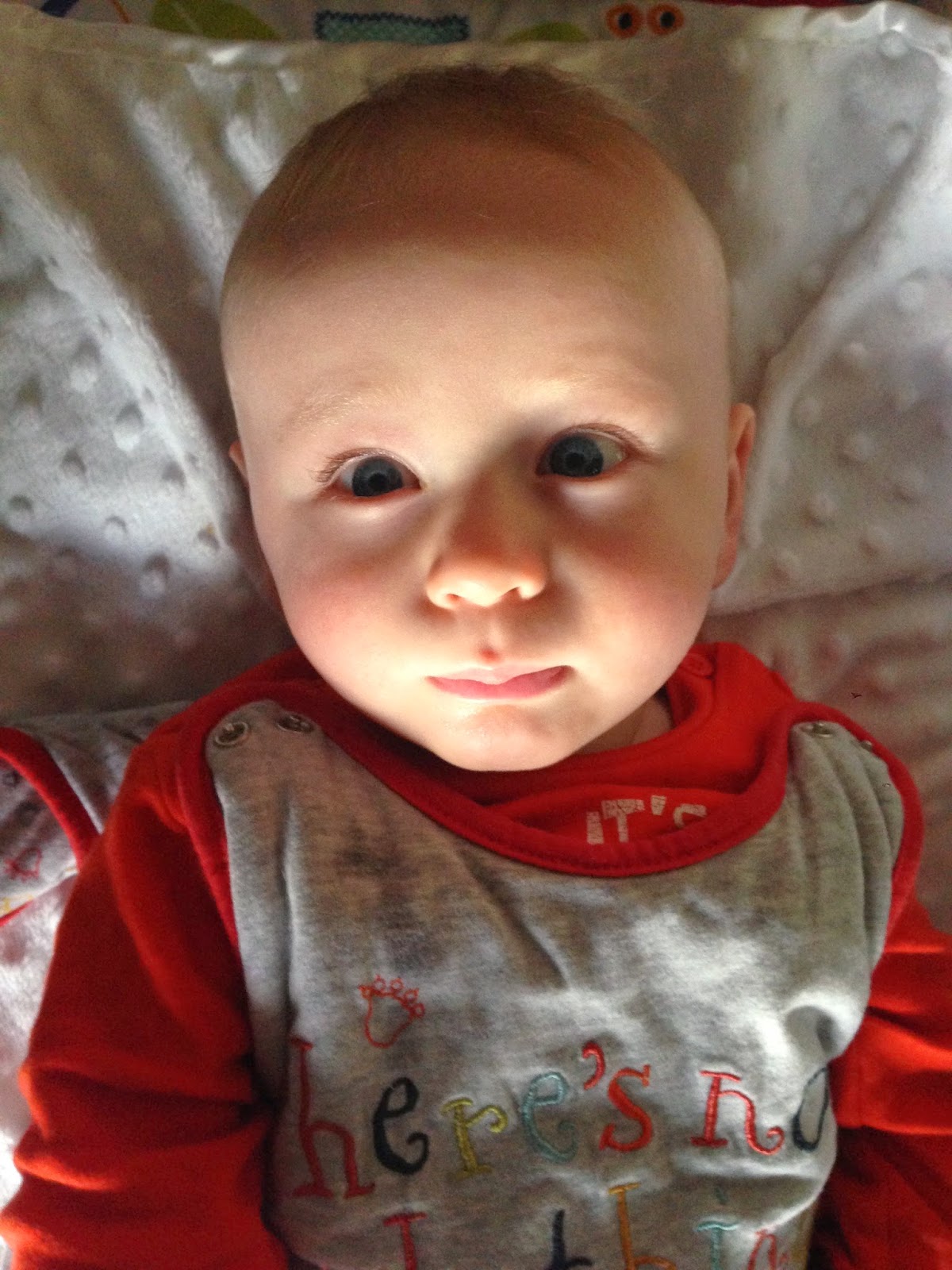 #sundaymorningmadness 46 weeks. Some mornings, he will lie really still for me to change his nappy. This kinda scares me because this kiddo doesn't stop. (Mummy confession, I sometimes give him a little white chocolate while I change a bad nappy for the sake of my sanity and carpet). So he's still in this photo, that's pretty amazing.

Of course I thought i'd jump on the bandwagon with the May the 4th be with you... 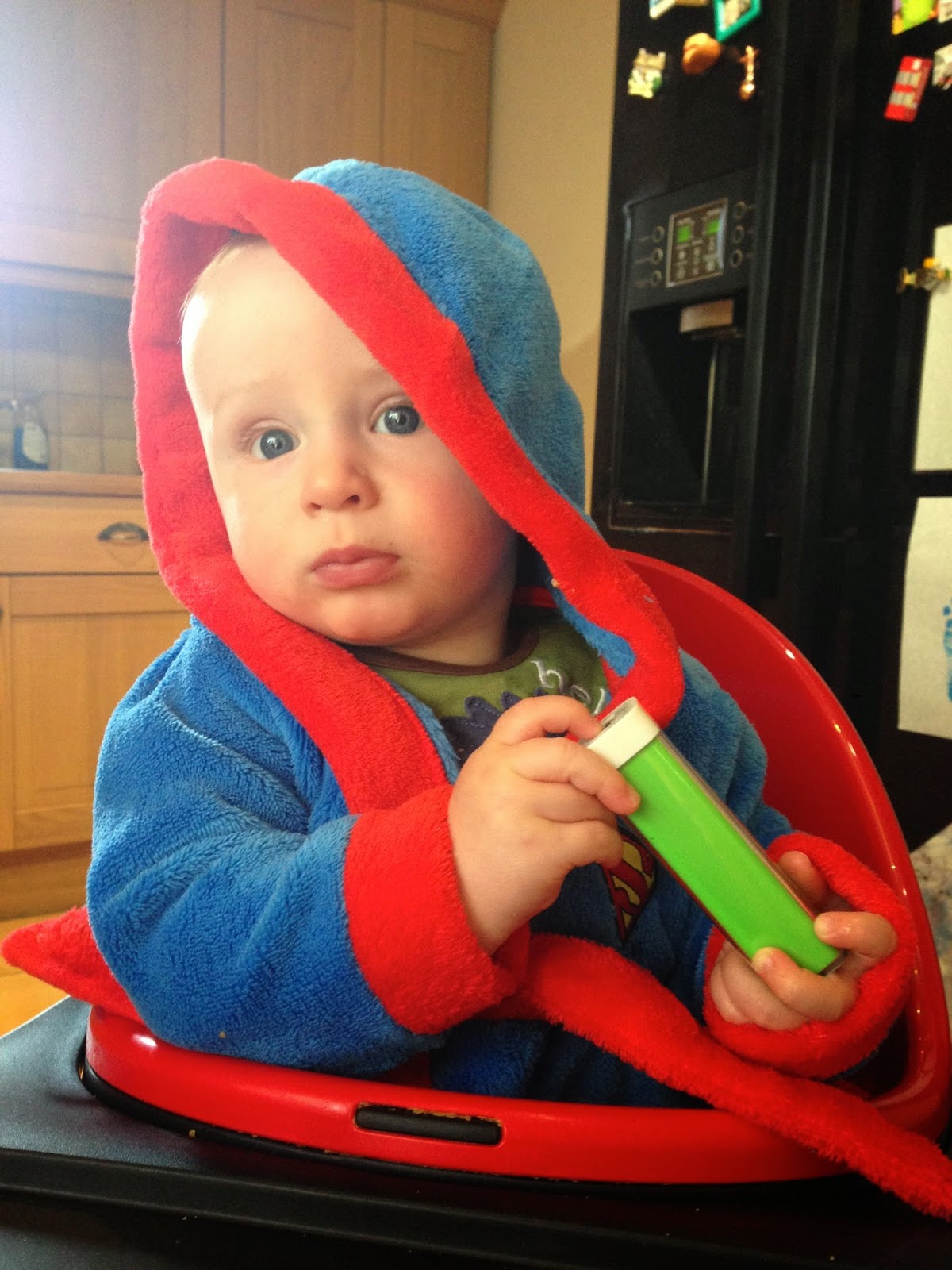 It was the best I could do at 6:30am on a Sunday morning. I thought it was funny... LJ was pretty confused about why he was allowed to play with the green top up charger for 2 seconds. 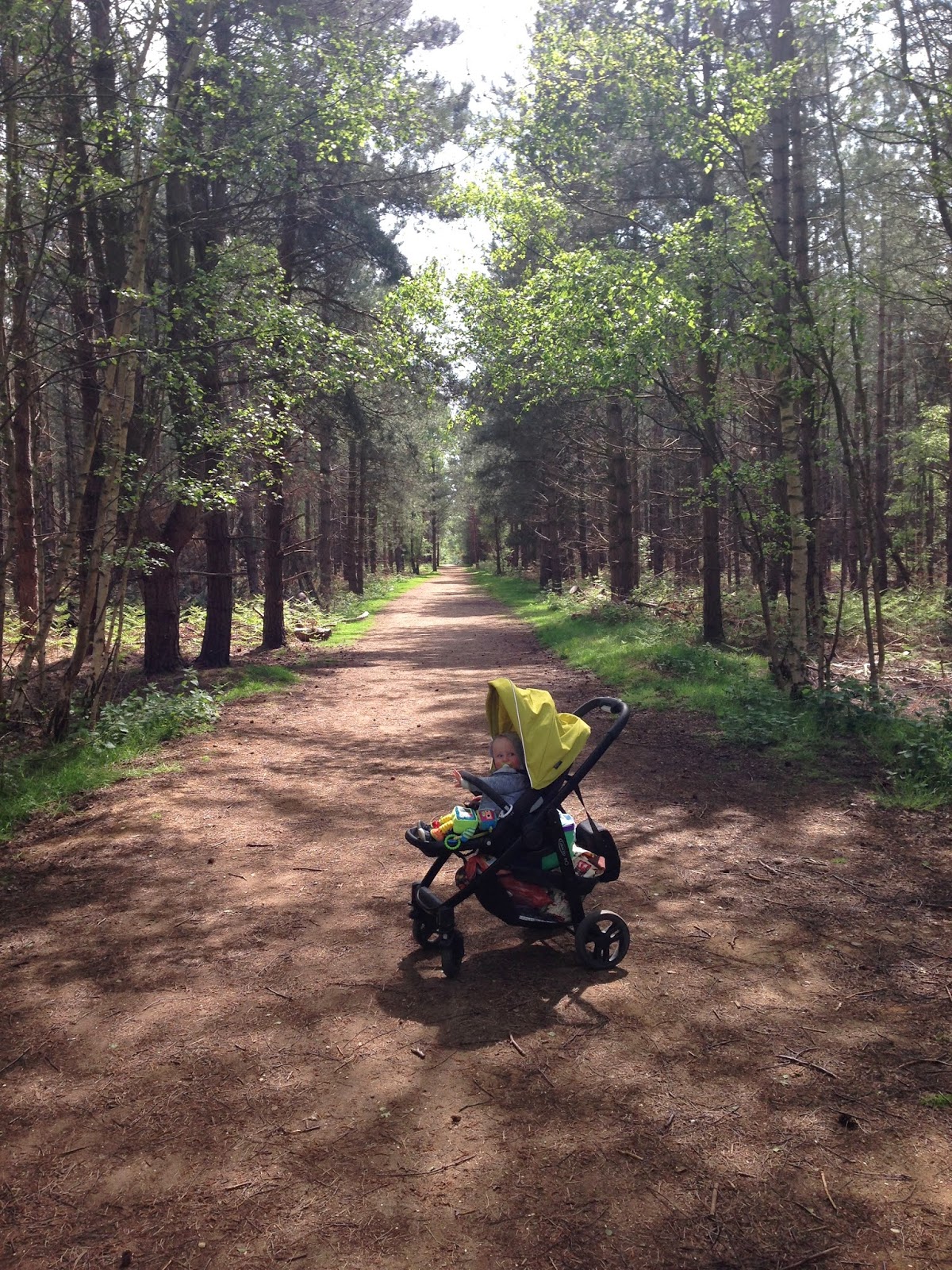 We spent Sunday at a local forest to us. It was so nice to get out and do something that we haven't done before (or at least not since we were young). I did my usual abandon my pram for a photo creative baby pram on location shot and he was actually awake for once!

Previous pram shots have been the following: 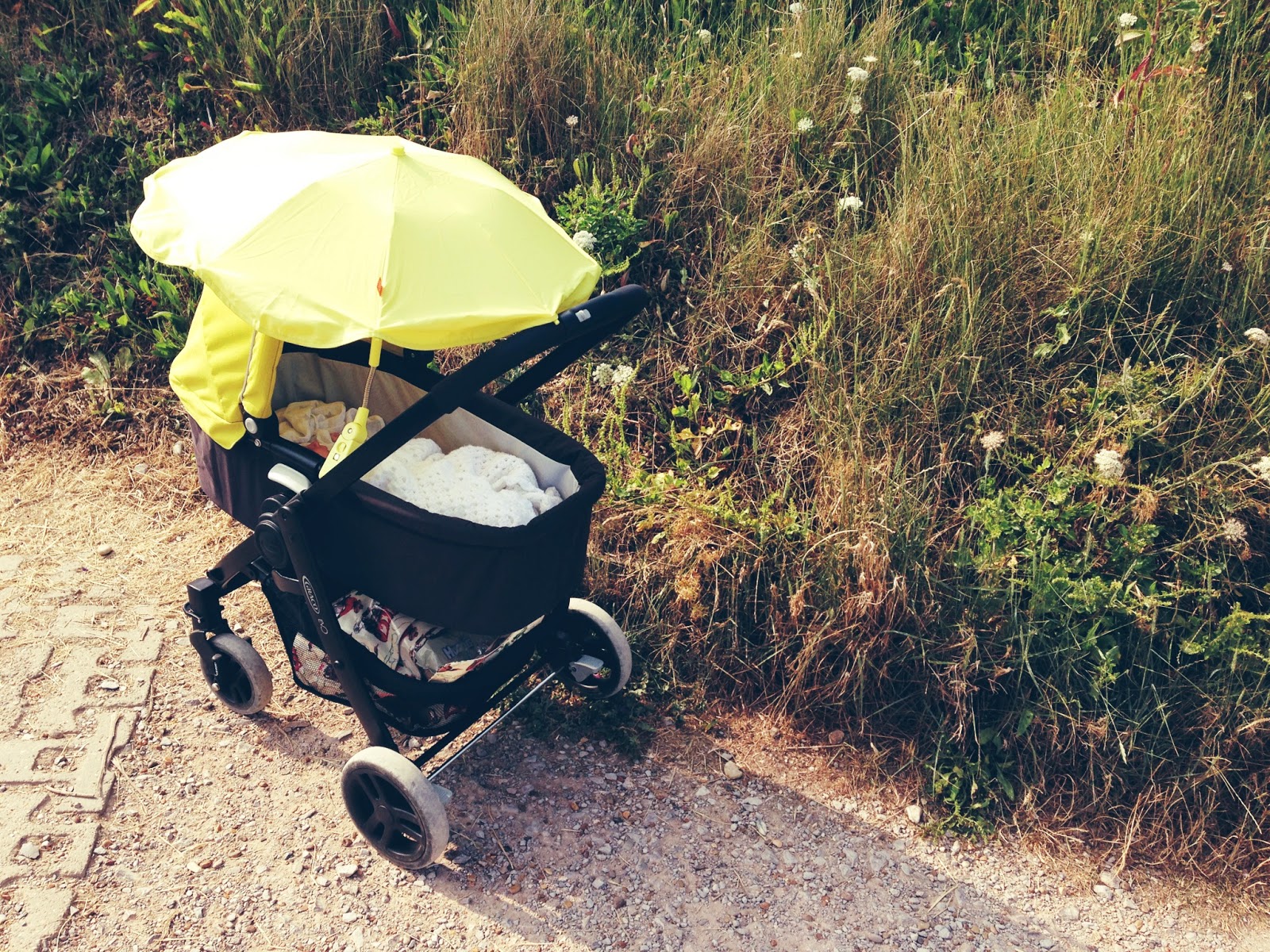 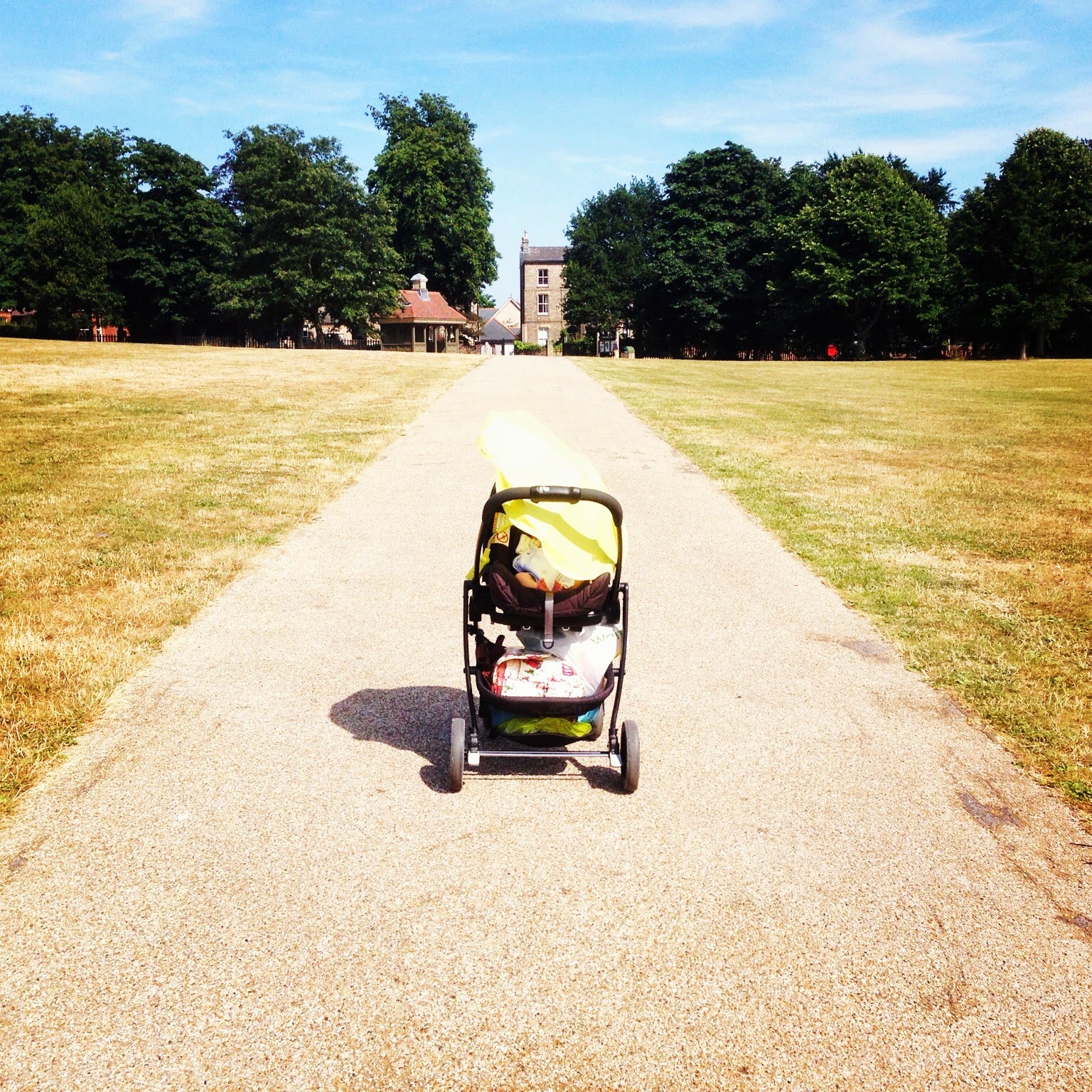 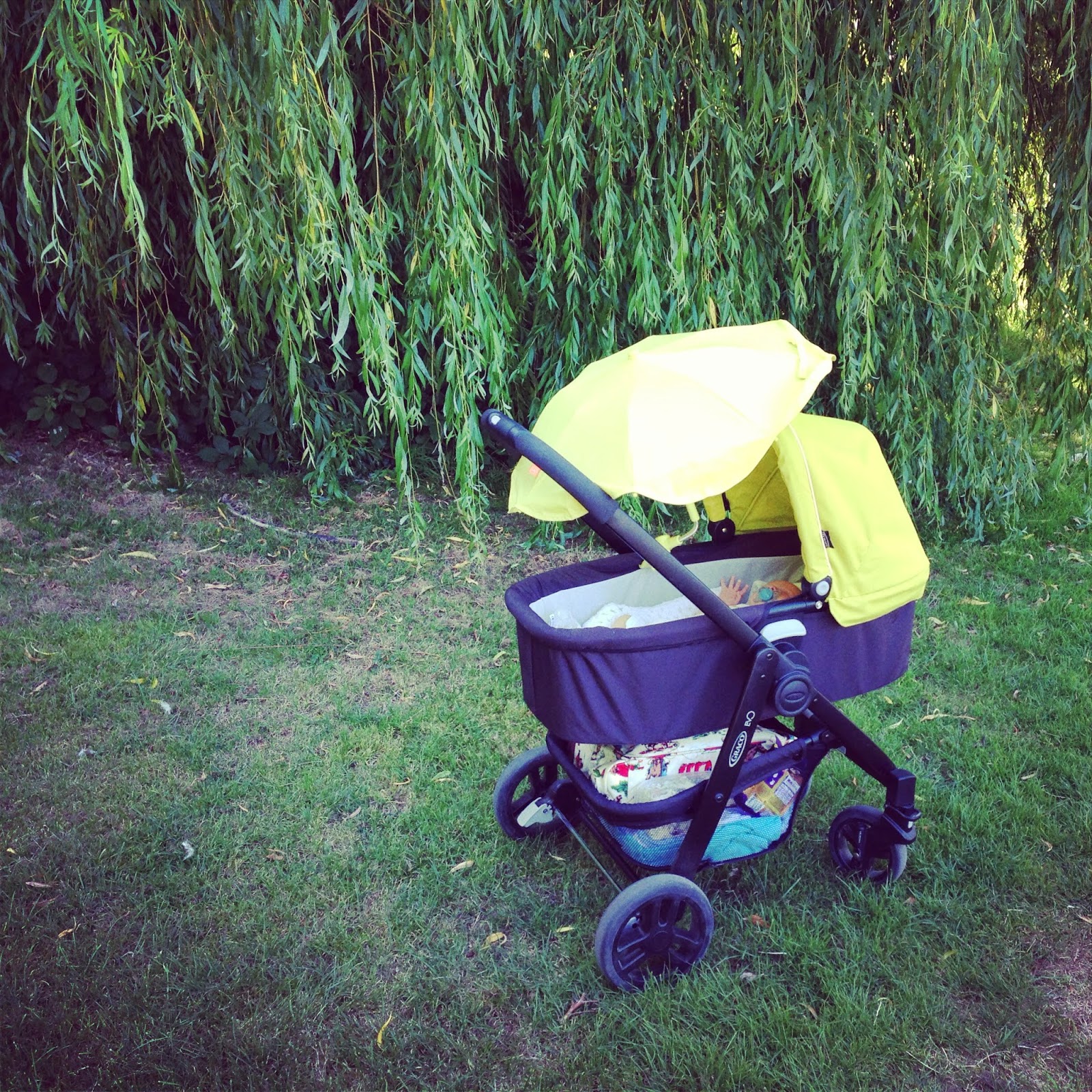 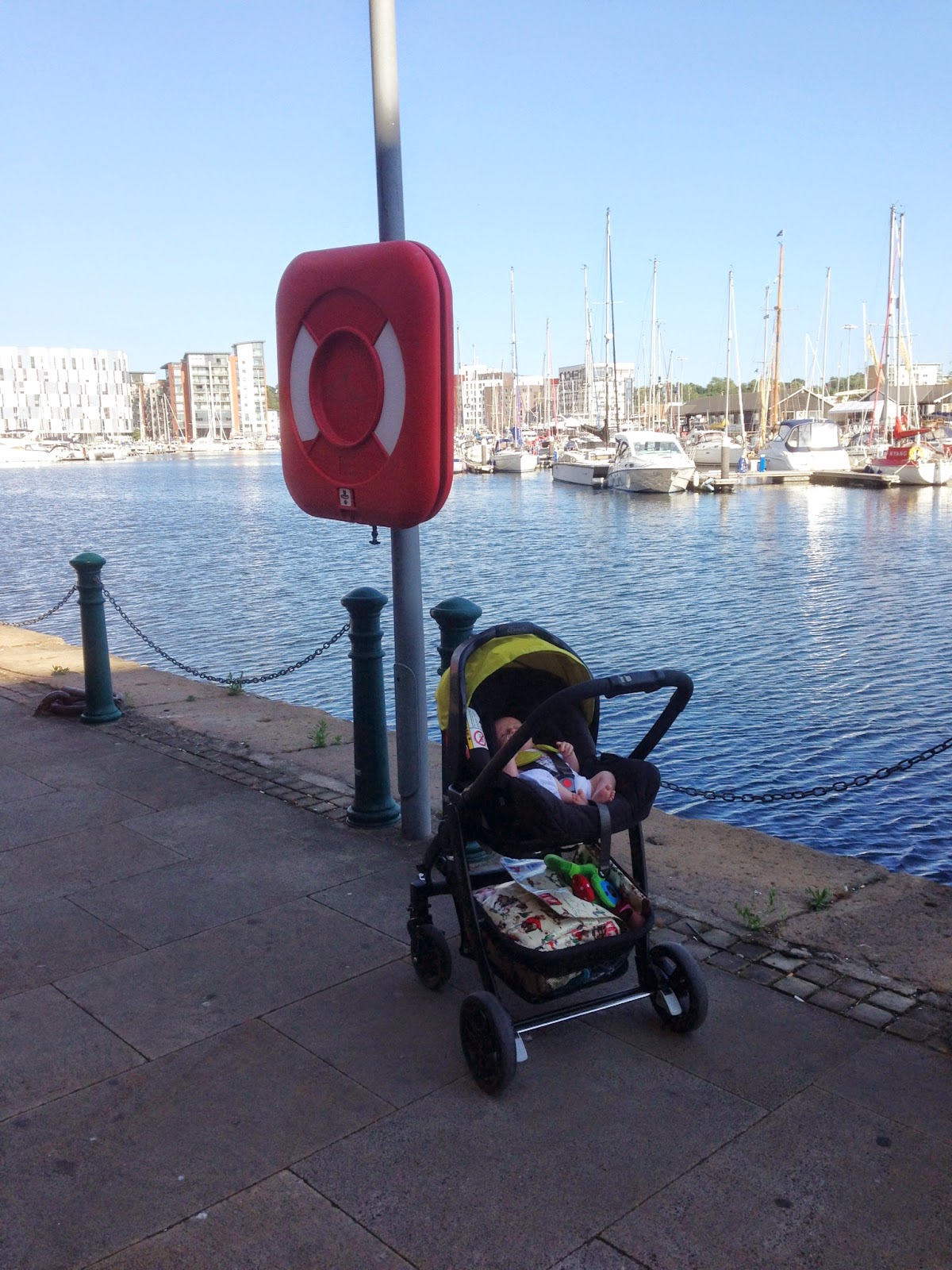 and my personal favourite...

I got the idea from a lady on Instagram who would always take a photo of her pram and baby in random places. I try and do a few every so often but there hasn't been many in the winter. If you look on my instagram you will properly find a few more. 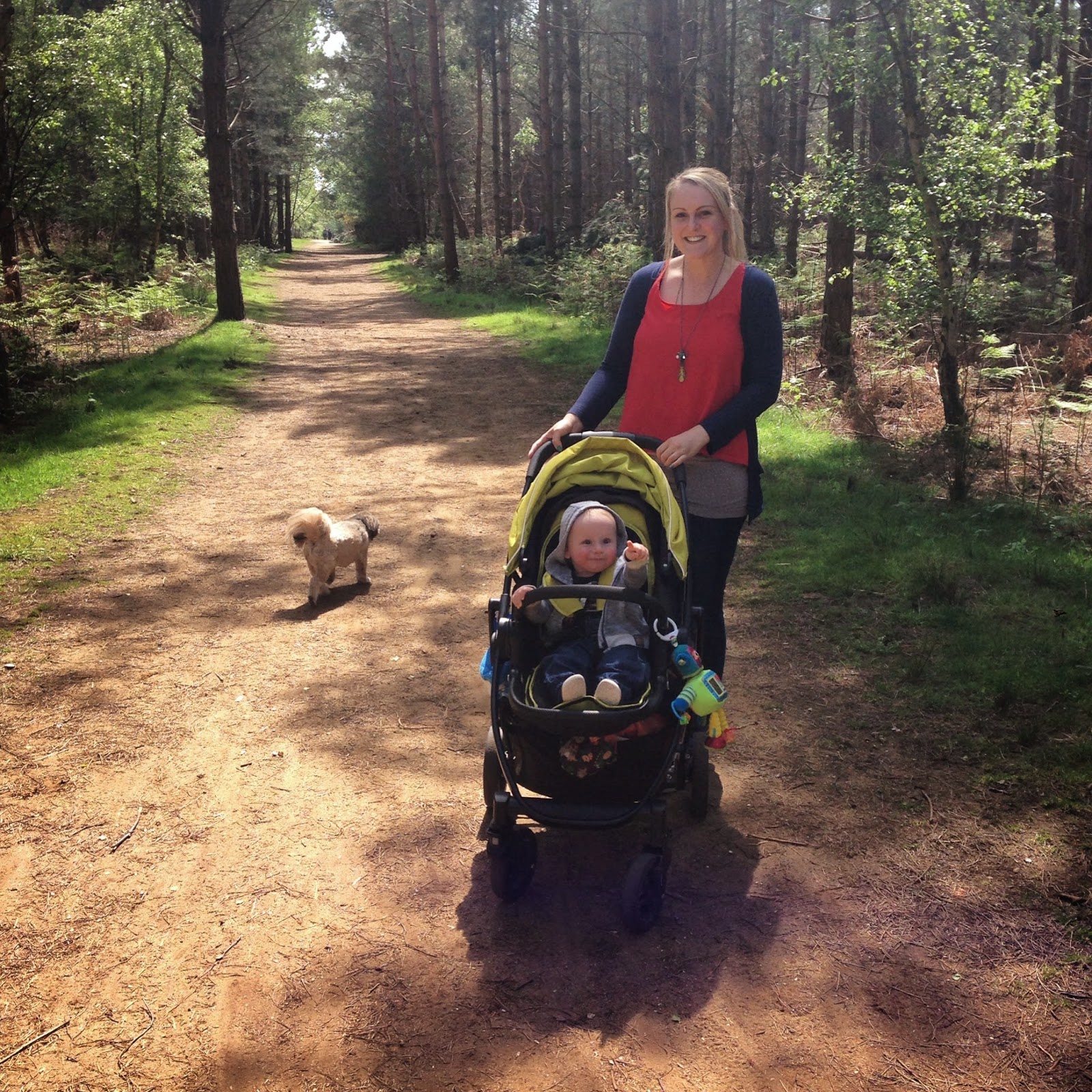 We even got some mummy and LJ photos! This is a rare thing, LJ will think he spent all his time with his daddy when he looks back at his photos. 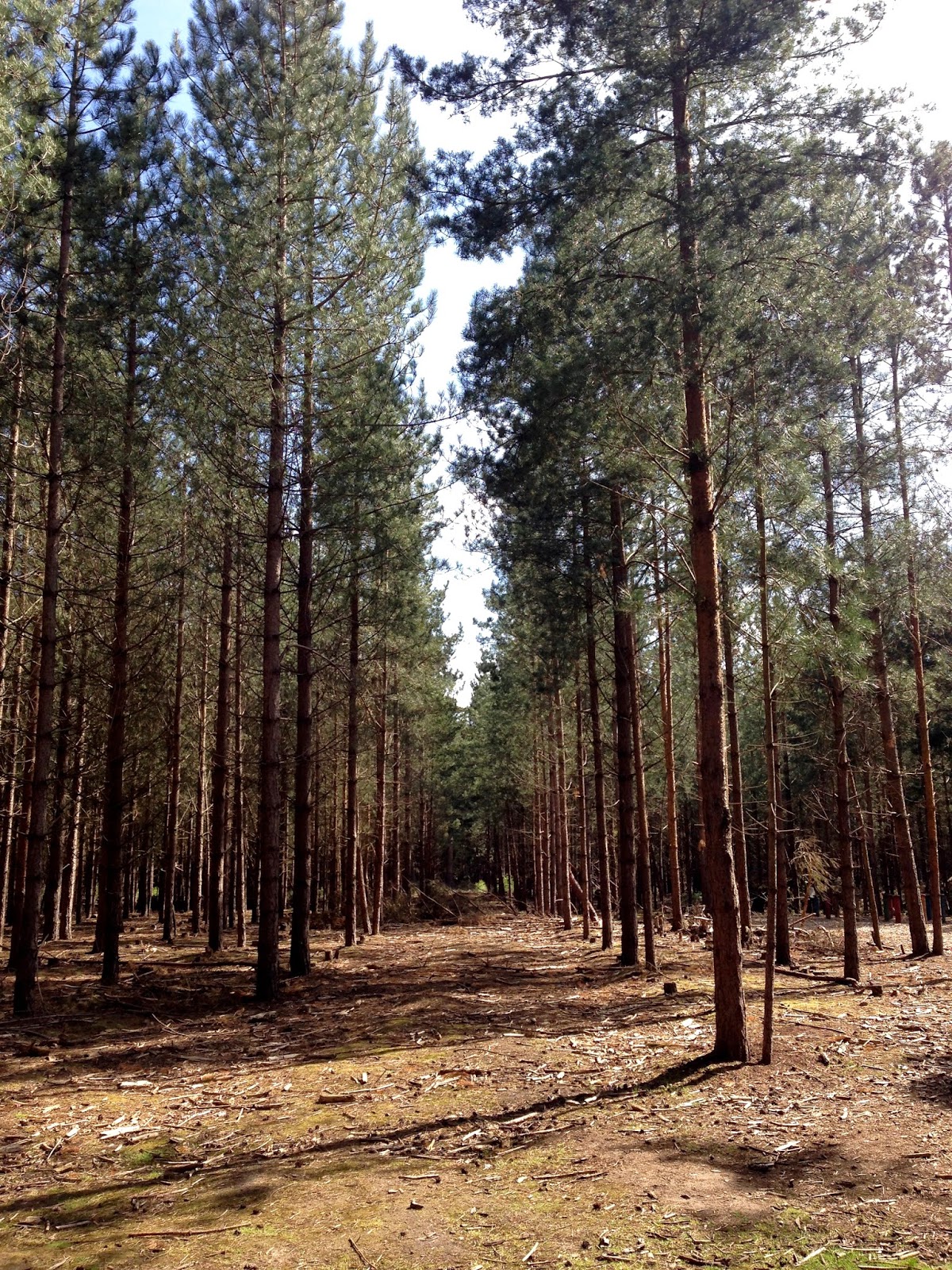 The place was beautiful, I loved how there was straight narrow gaps every so often, it just looked so inviting and made me want to take photos. I'm pretty sure there is a reason for this and I'm pretty sure I learnt about it when I did a forest volunteer day for work a couple of years ago, but I don't remember the reason right now. 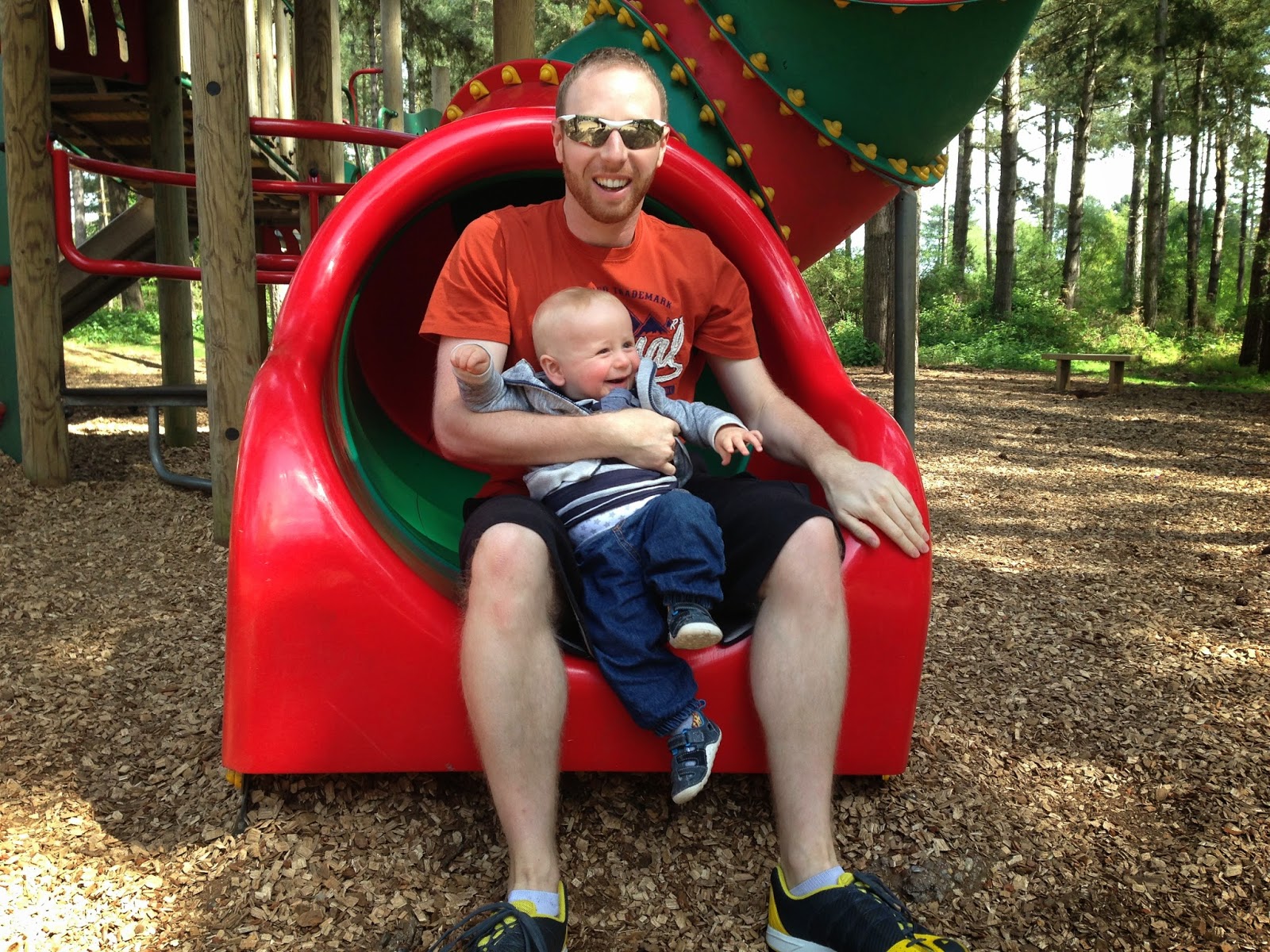 We had a great time at a little park in the middle. Ali got told off by a 5 year old for going down the slide because he was too big and LJ was too little. The rebel in him did it anyway and they both had a great laugh! 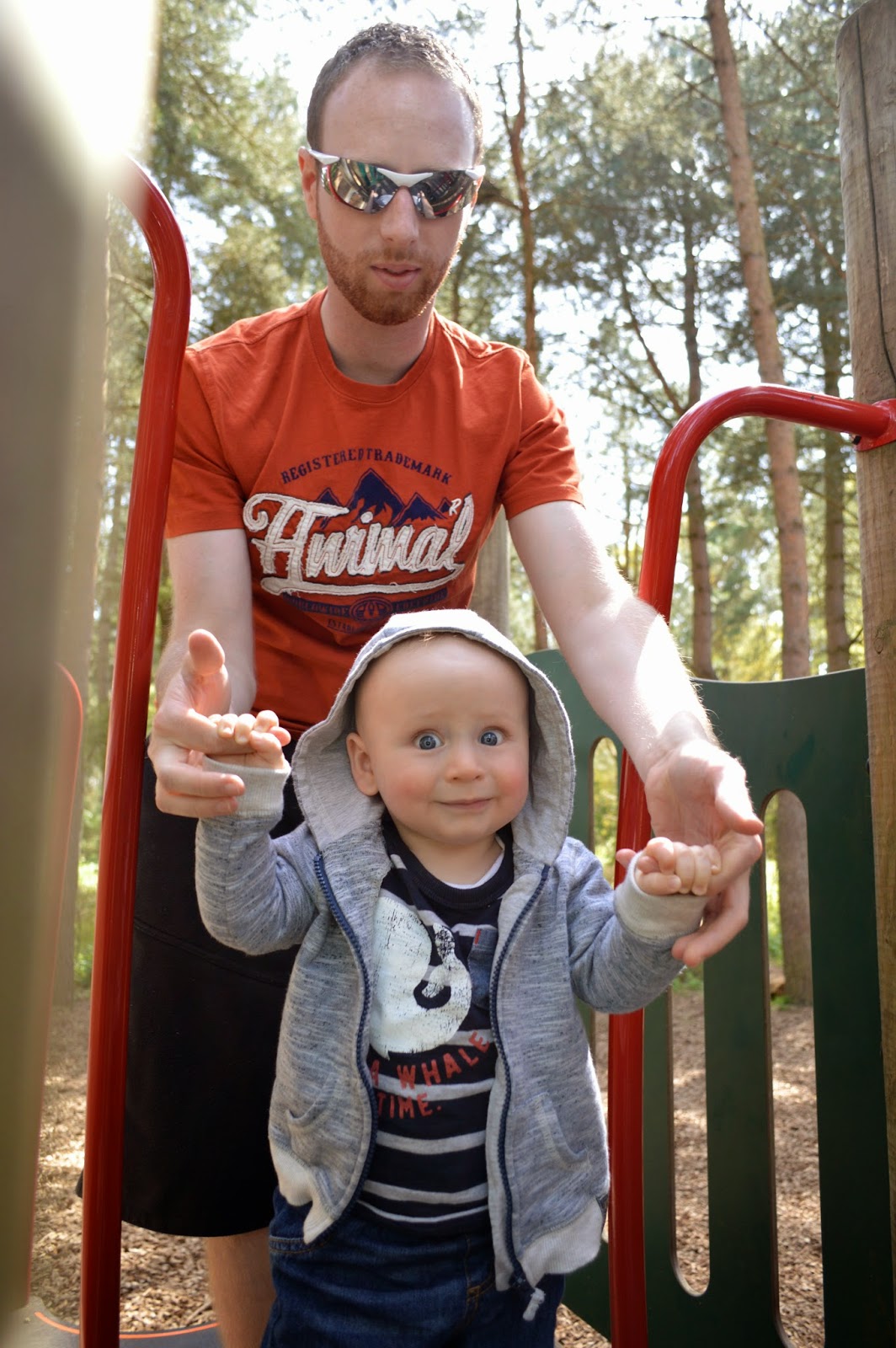 I also switched from behind the camera to go have some fun with LJ! 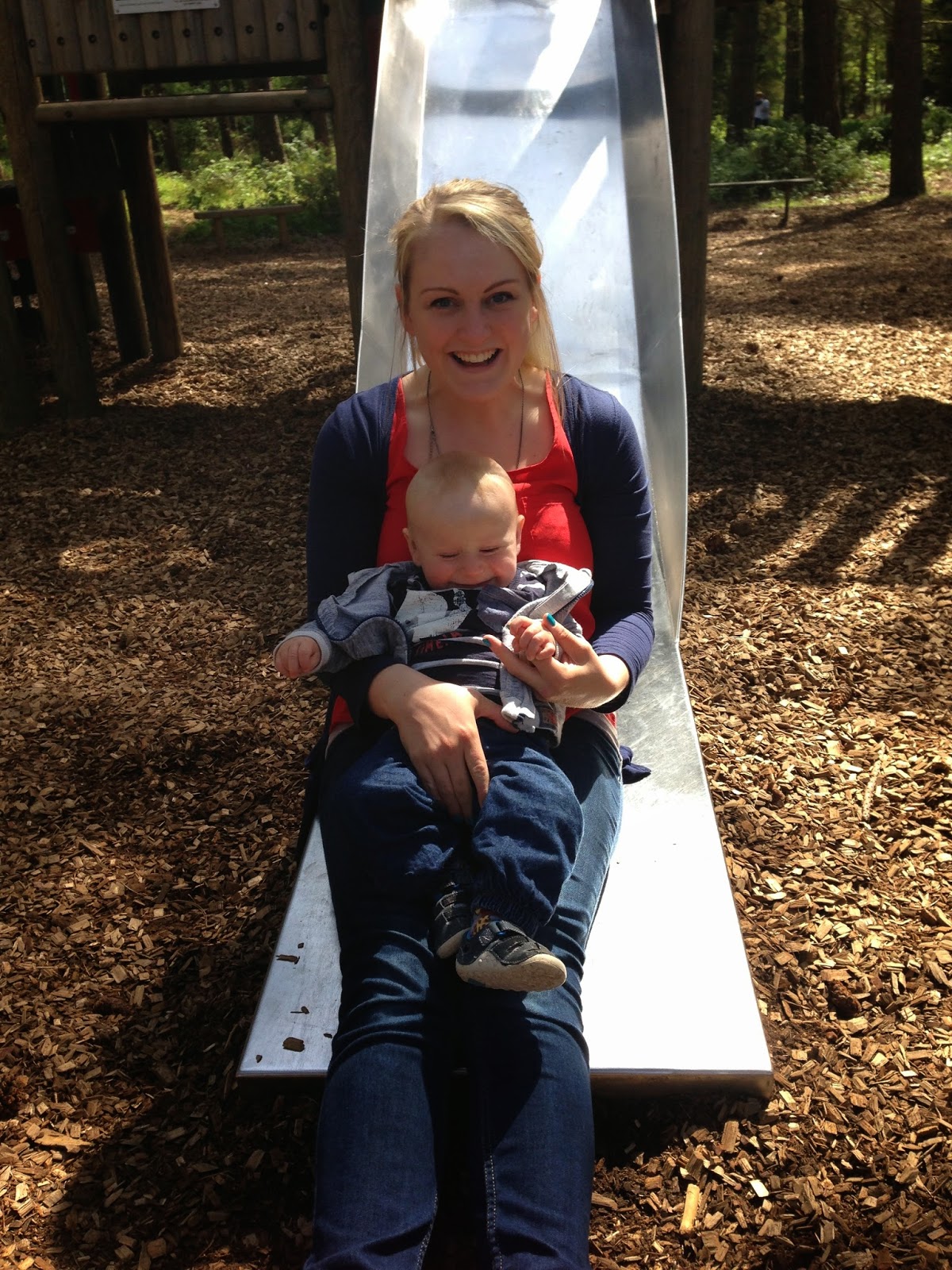 (Plus I had to take advantage of the extra wide adult bottom fitting slide. 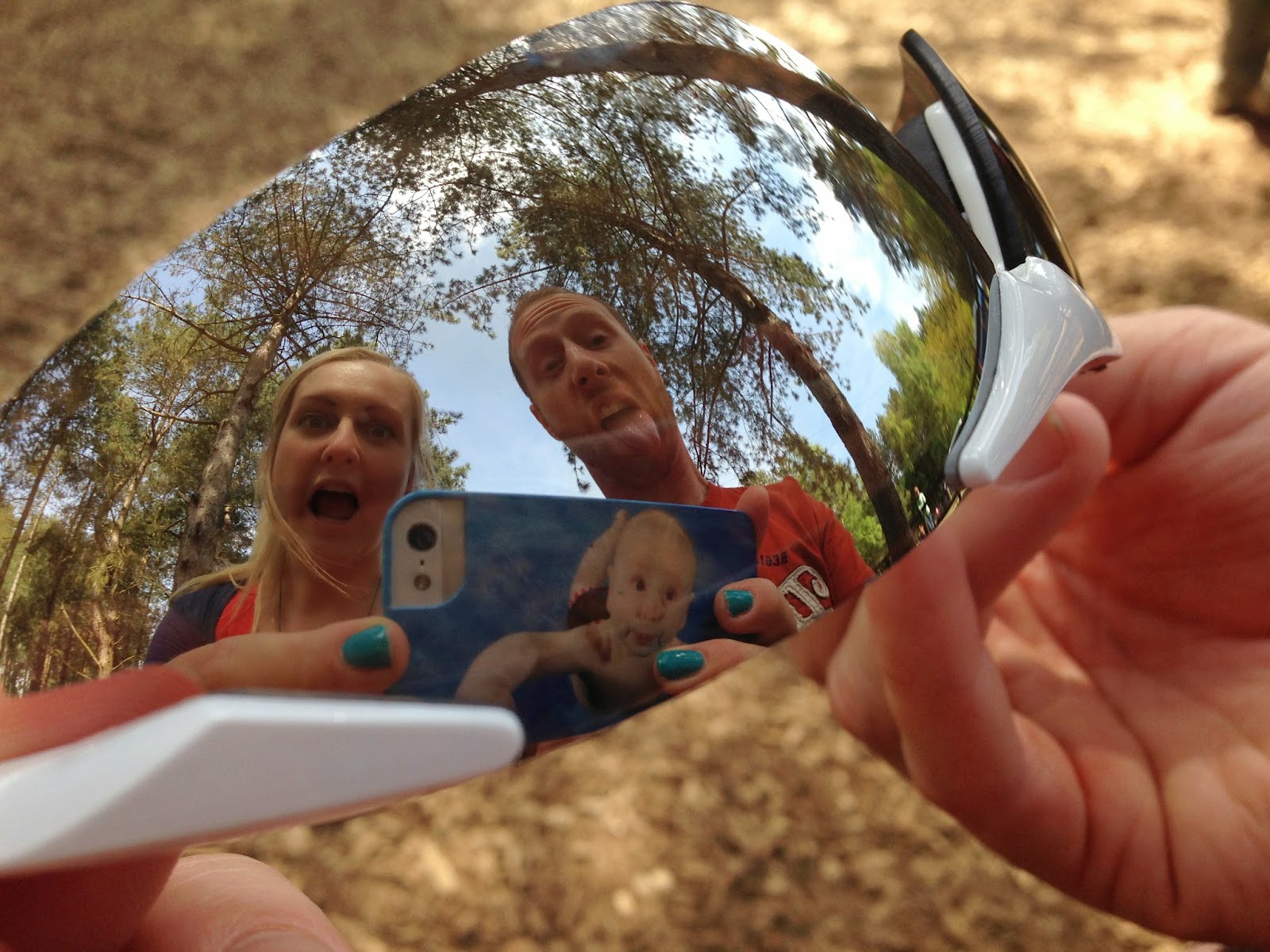 Mummy and Daddy had some fun too... I love a good sunglasses reflection picture. 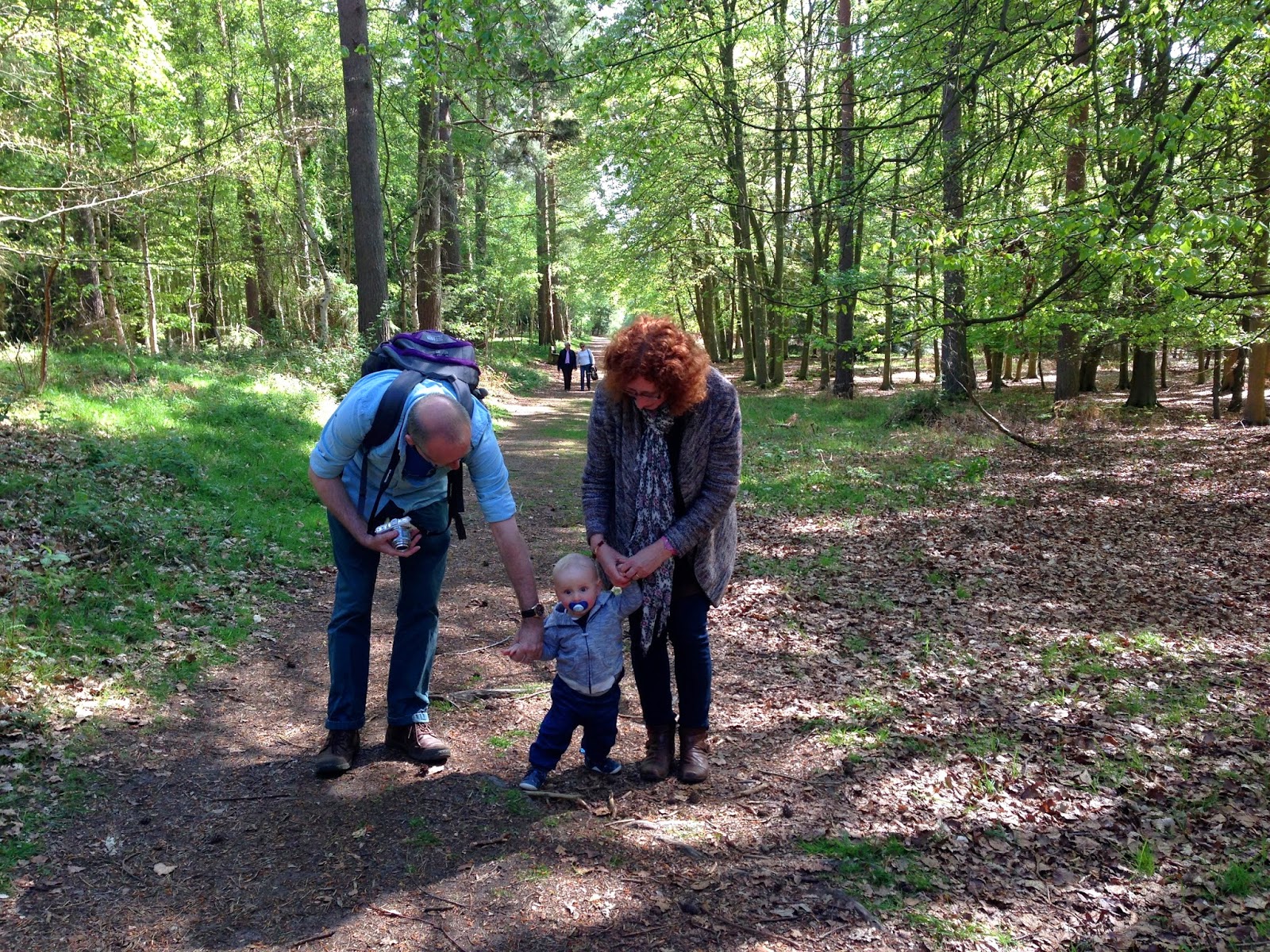 At the time of this outing, I would say 'LJ's getting really close to walking on his own', that information has changed slightly but i'll save that for the next post. (You may never know at the rate i'm typing!) He has progressed to one handed walking and is very clear on who he wants holding his hand, he is not afraid to shake you off! He made me very sad on this day because he wanted nothing to do with me all day (never mind I was the one who carried you and birthed you and pretty much cares for you 24/7 little man!) he is very much a daddy's boy at the moment.


So he pretty much walked all the way around the forest and we had fun investigating lots of different things like the wooden wig wams but LJ wasn't so sure. 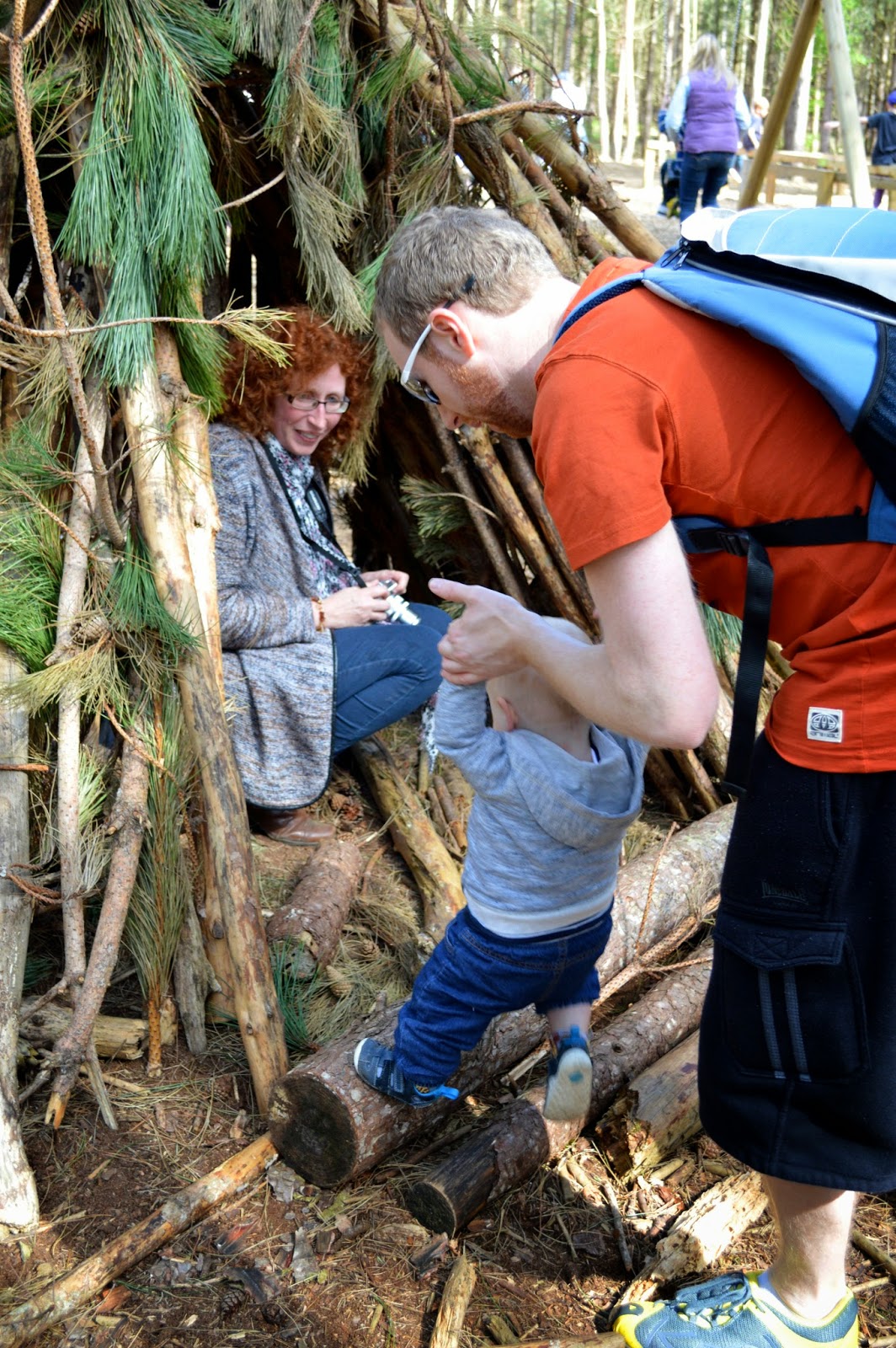 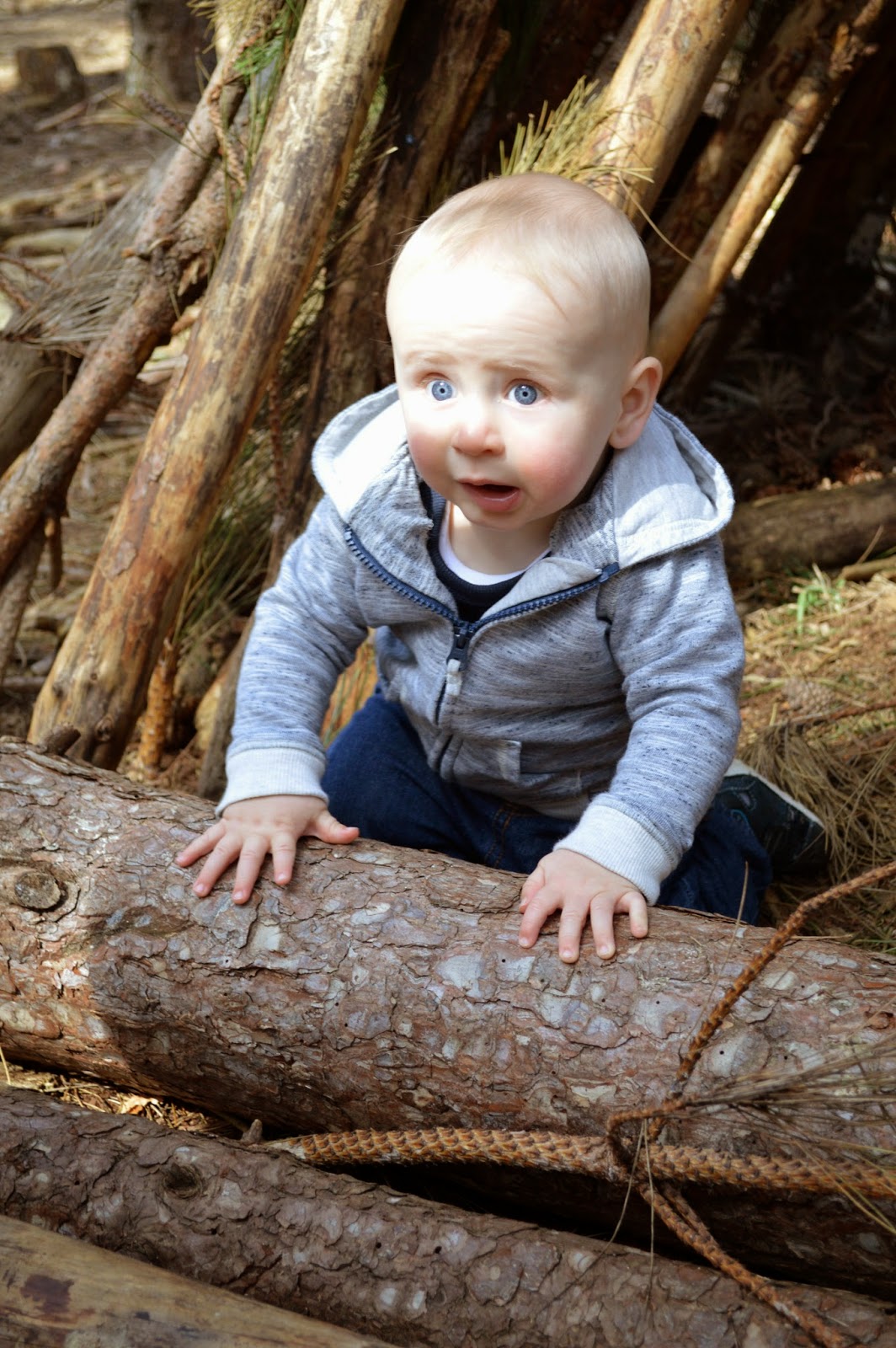 I loved the light coming in through the trees in this photo and the one below. It makes his eyes look so even more beautiful. He had fun with pine cones too and we lasted a good 10 minutes before he tried to eat one. 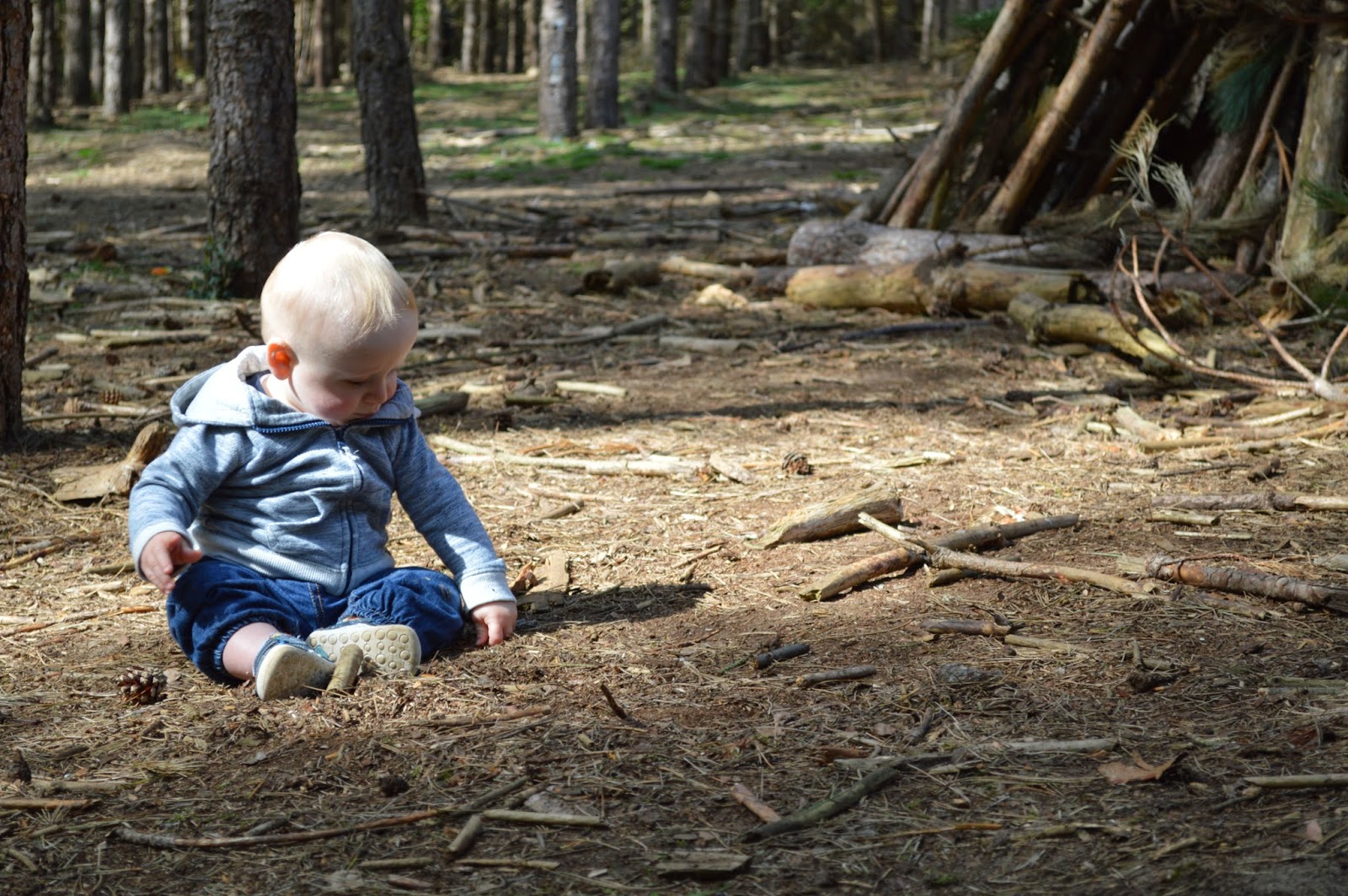 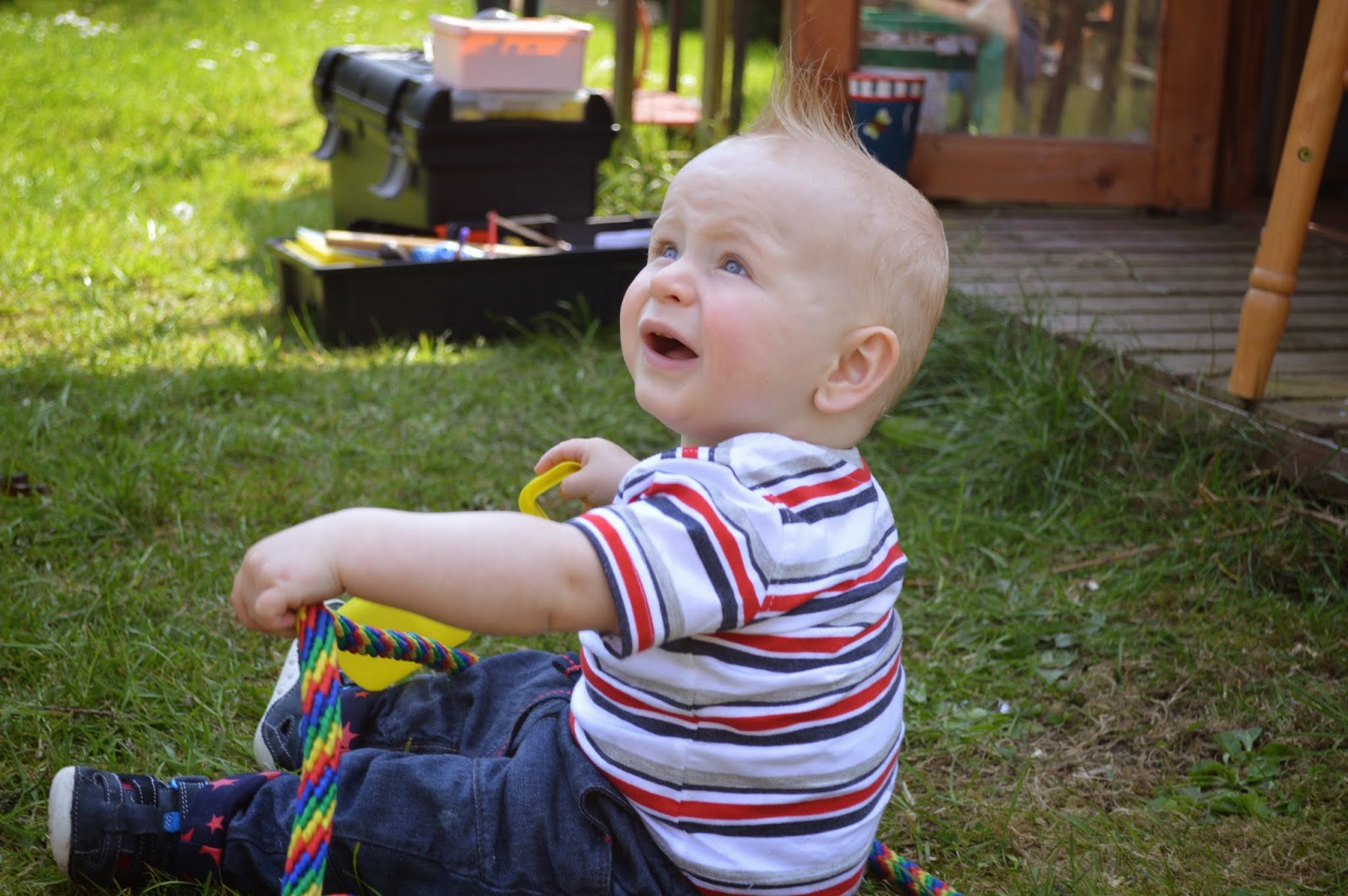 The great thing about bank holidays is more family days together, and even better extended family members usually have days off too. We spent the day in the garden doing some gardening (I say doing, I supervised and didn't really do anything) and LJ got to run riot, which was fitting for his new hairstyle due to his refusal to wear a sun hat and not stay in the shade (Suncream hair, anyone?) 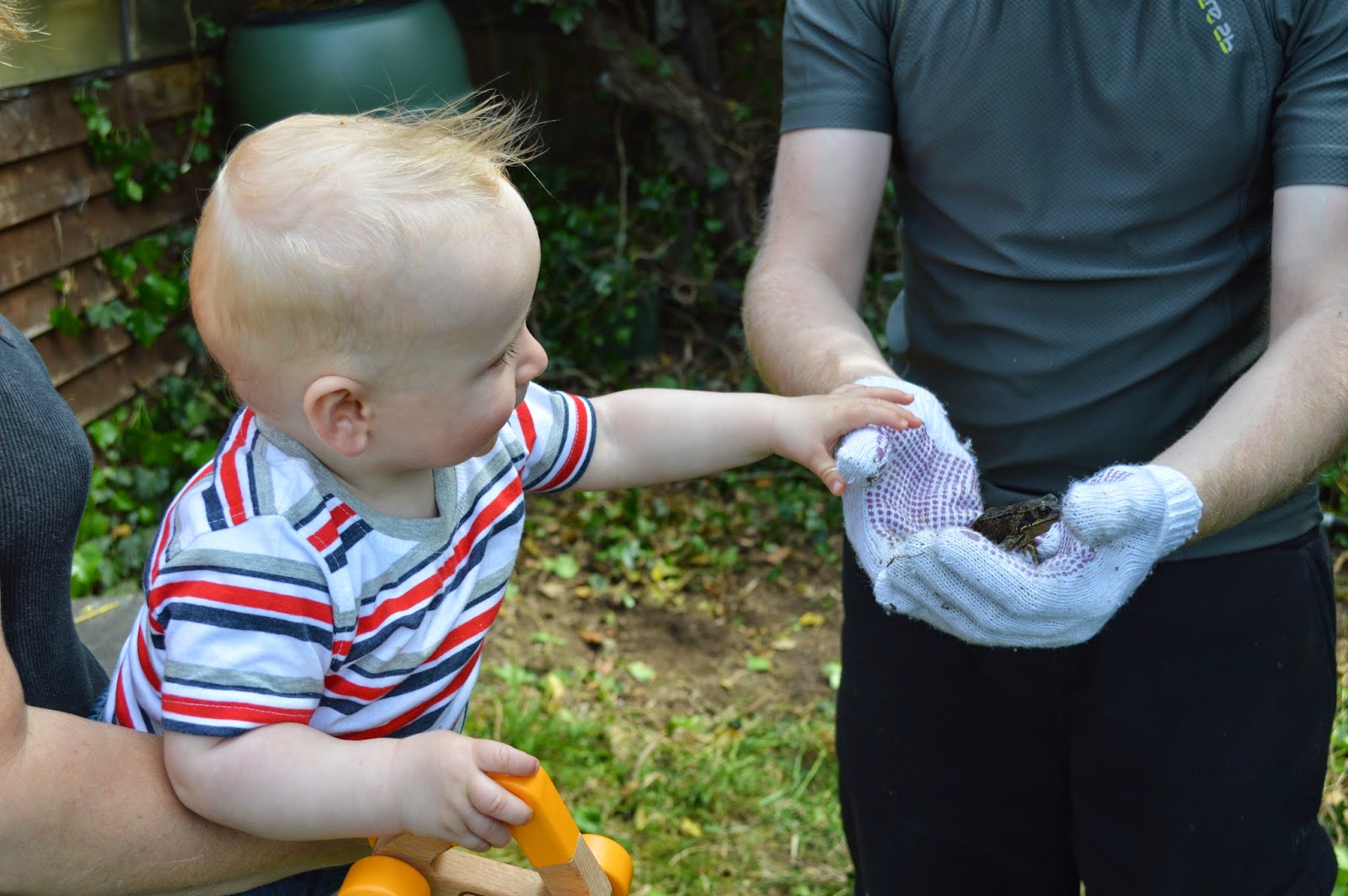 He got to meet his first real frog, the same as the ones mummy is always singing about in the bath. The frog is lucky he escaped because i'm pretty sure LJ would have tried to eat him, he was not scared one bit! On a side note, Ali is great at carefully catching various butterflies, moths, frogs and other small beings, if you ever want to look at one. 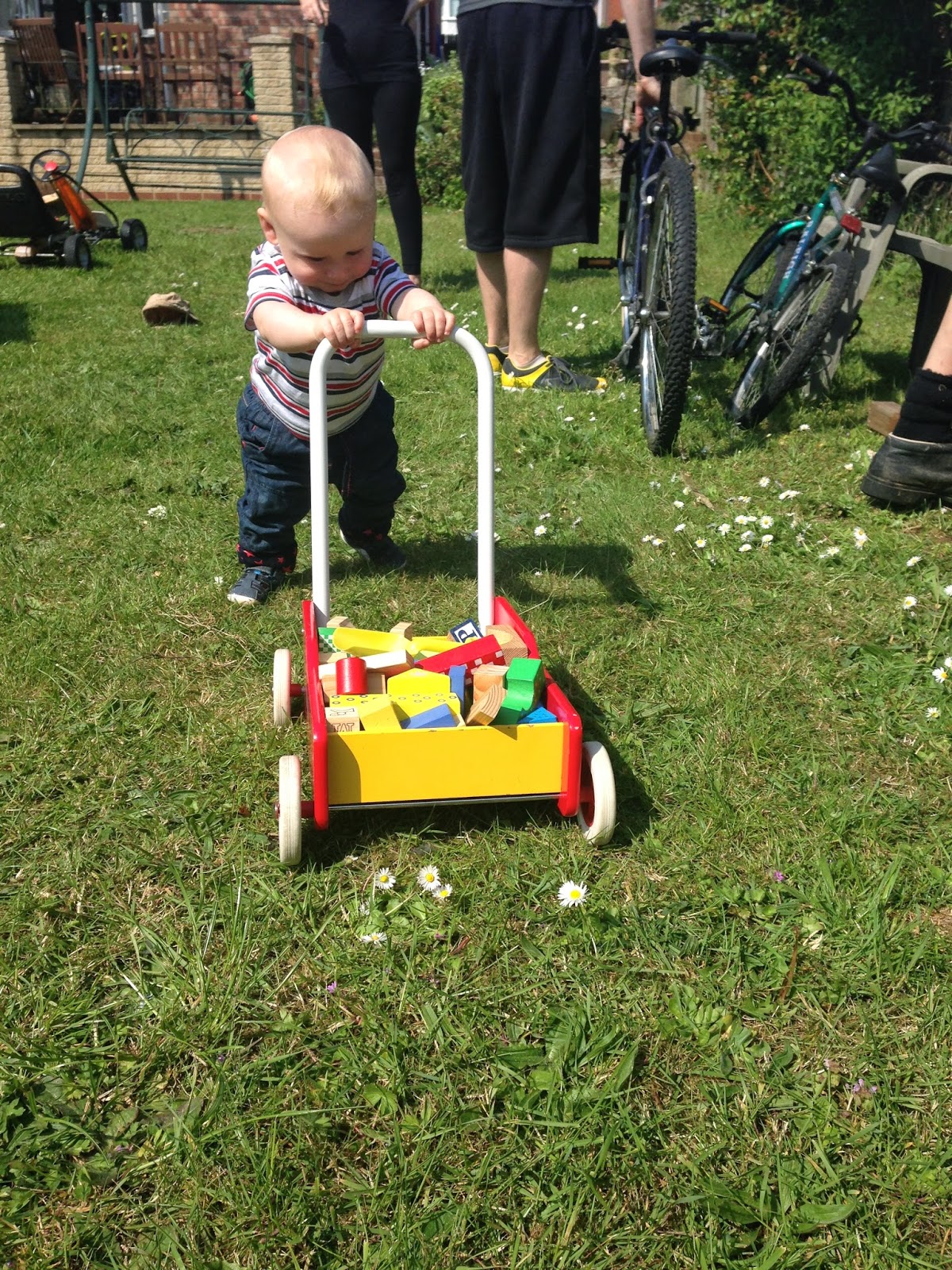 LJ had a pretty good run of the garden with his walker, we have to lug this thing around with us everywhere but our backs are thankful for it. I'm also really impressed that first he learnt to stick his hand in the air to say he wanted help to turn around, he has now progressed to actually turning the wagon himself, which I can only describe as some kind of baby 3 point turn. 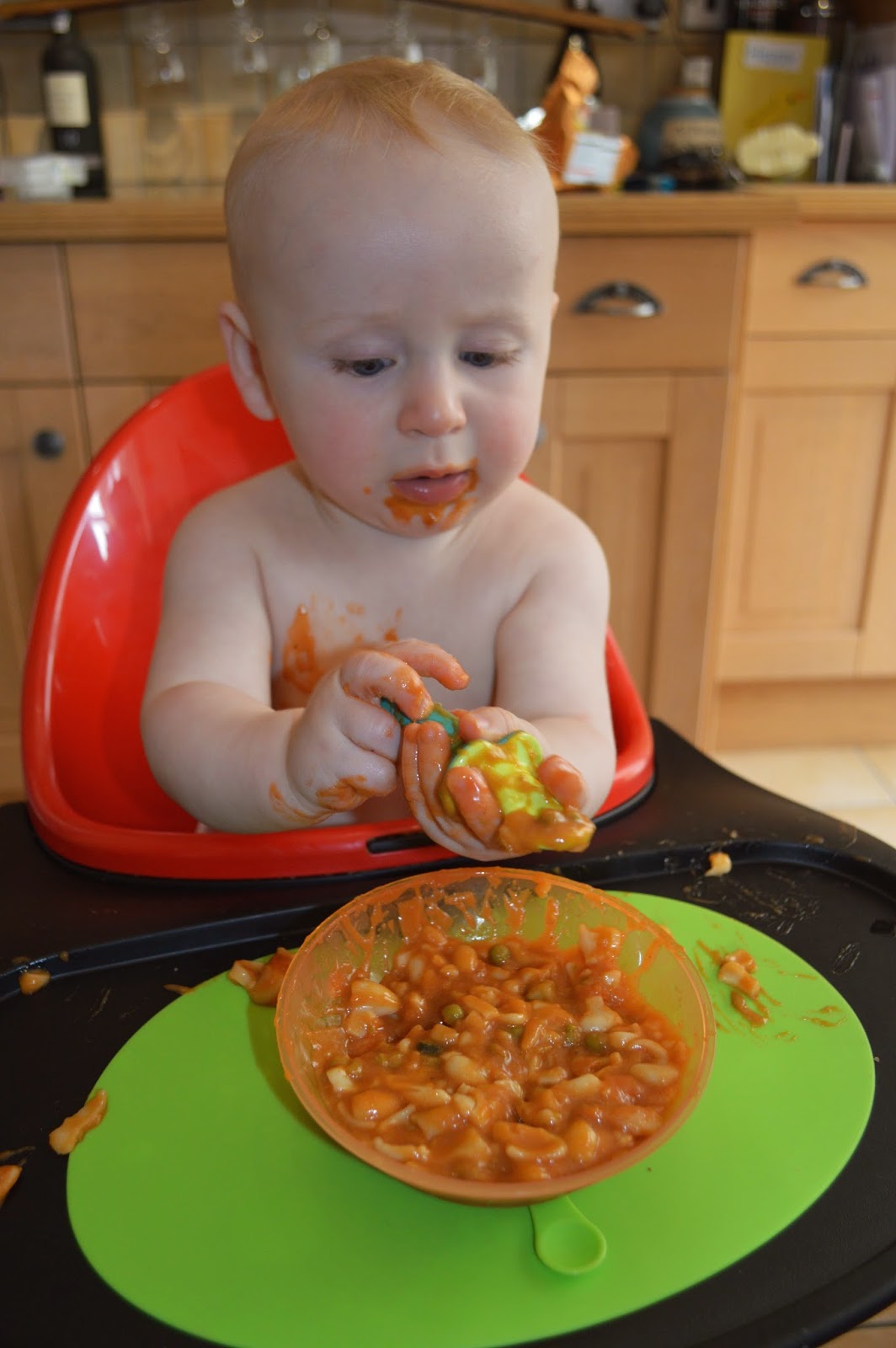 It was a lovely chilled day and we had some BBQ sausages and burgers for the first time this year and it was definitely t-shirt weather. That kind of day doubled with a bank holiday and a 4 day week makes everyone happier.


We also spent the extra time we had at the weekend letting LJ experiment again with the spoon. I actually got the letter today about his one year review and at least I can say he tries with the spoon... haha. 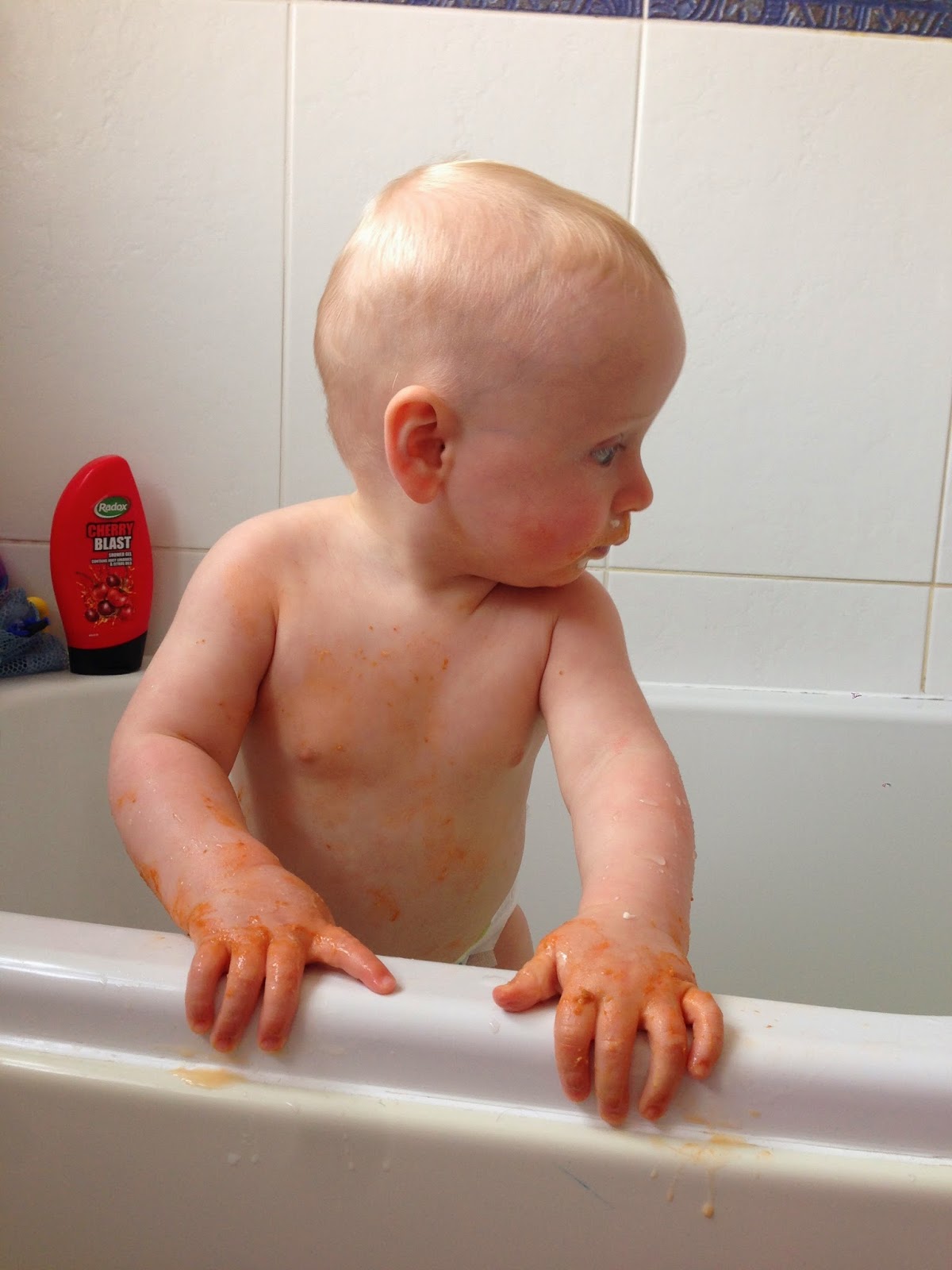 There might have been a pasta massacre but i'm sure he had a great bank holiday weekend!

I'm going to try and post again tomorrow to catch up as i've got lots of LEGO updates and someone turned 11 months on Friday and I was only 3 days late with the monthly photos.