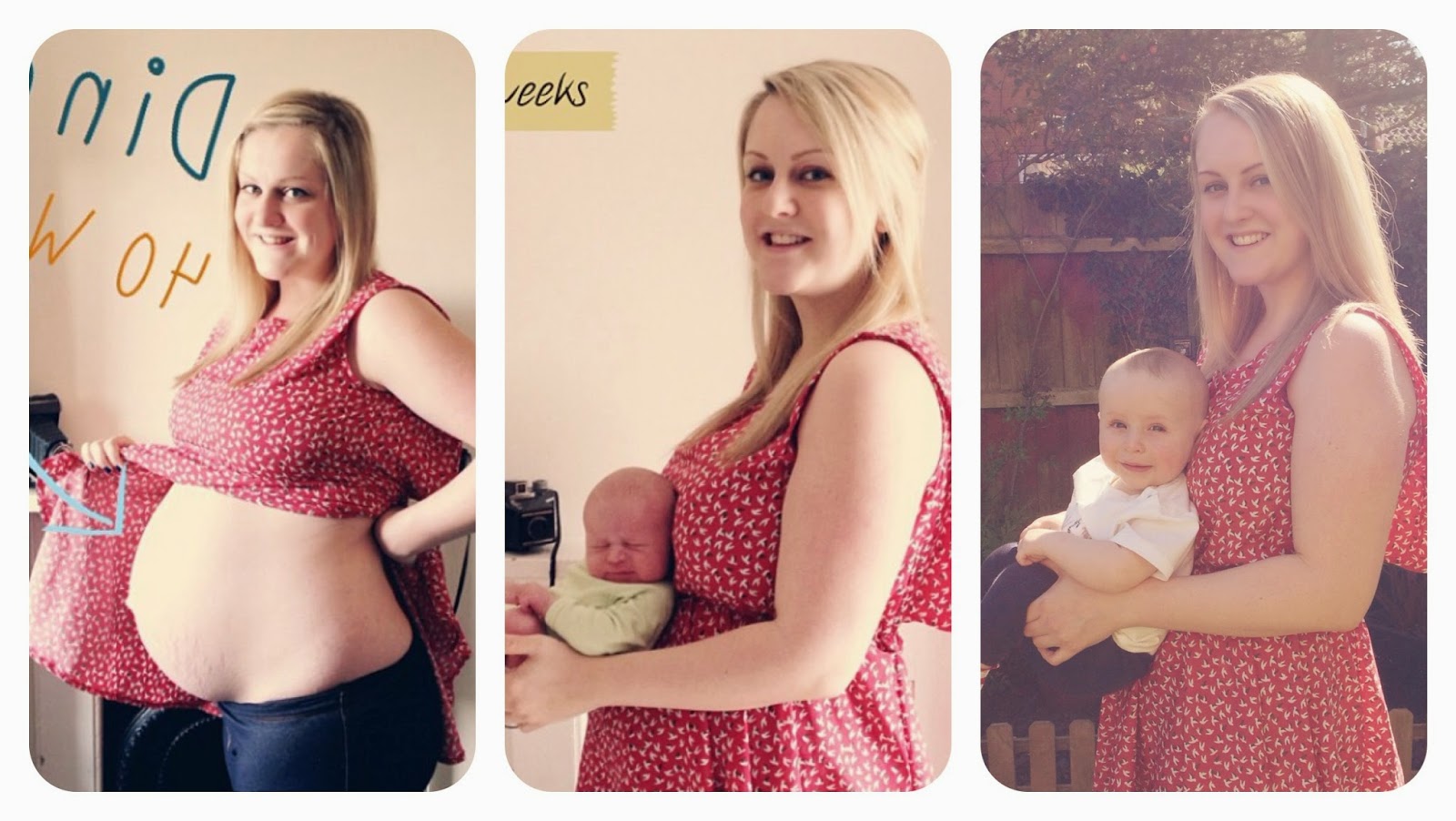 I still find it crazy that not only do I have a baby, but he's closer to a year than newborn and pregnancy seemed like forever but day to day with baby goes whizzing by?!

When I was pregnant, or rather before I was pregnant, I had lots of thoughts in my head about how I would document it and all different creative ways of doing videos or photos.

Then in reality, when I was pregnant, they all seemed a bit of hard work.

I did want to do a stop animation video of my pregnancy, this would have meant at least 30 photos each week of slight movements so that we could link it all together. So at 10 weeks pregnant, I thought yes, lets start.

Do you think we had a plain white wall space in our house? ... no.

Problem one. So we settled on in front of the fire place in our bedroom. Did we have good light? ... no. One window in the room and I was starting this in November. Did my compact flash camera take good photos? ... no. They were over explodes or had shadow issues. Did I get stressed about it all? ... yes.

So we settled on one photo, taken with my iPhone and I settled for using the same filter app on my phone to lighten it and just thought - that will do.

So I scrapped the video idea after the stress of getting one photo. We would take two photos, one of my belly and one of my bump and I would always wear the same dress.

Looking back, I wish I'd worn a more figure hugging top as it would have showed the bump better towards the end, live and learn I guess.

For those who haven't seen it, here are all the photos together in a flipagram video.


As LJ was overdue, we also decided to take a photo of him when he was a week old. Just recently a friend shared a photo with me of a mum showing two photos side by side of 9 months in, 9 months out and holding her baby up to her tummy. As i'd already taken one of LJ when he'd just been out, I thought i'd do the same photo for 9 months old! He was a LOT heavier this time round and awkward to hold like that! We also don't live in the same house, so slightly different location but all the same, it was nice to see a comparison. 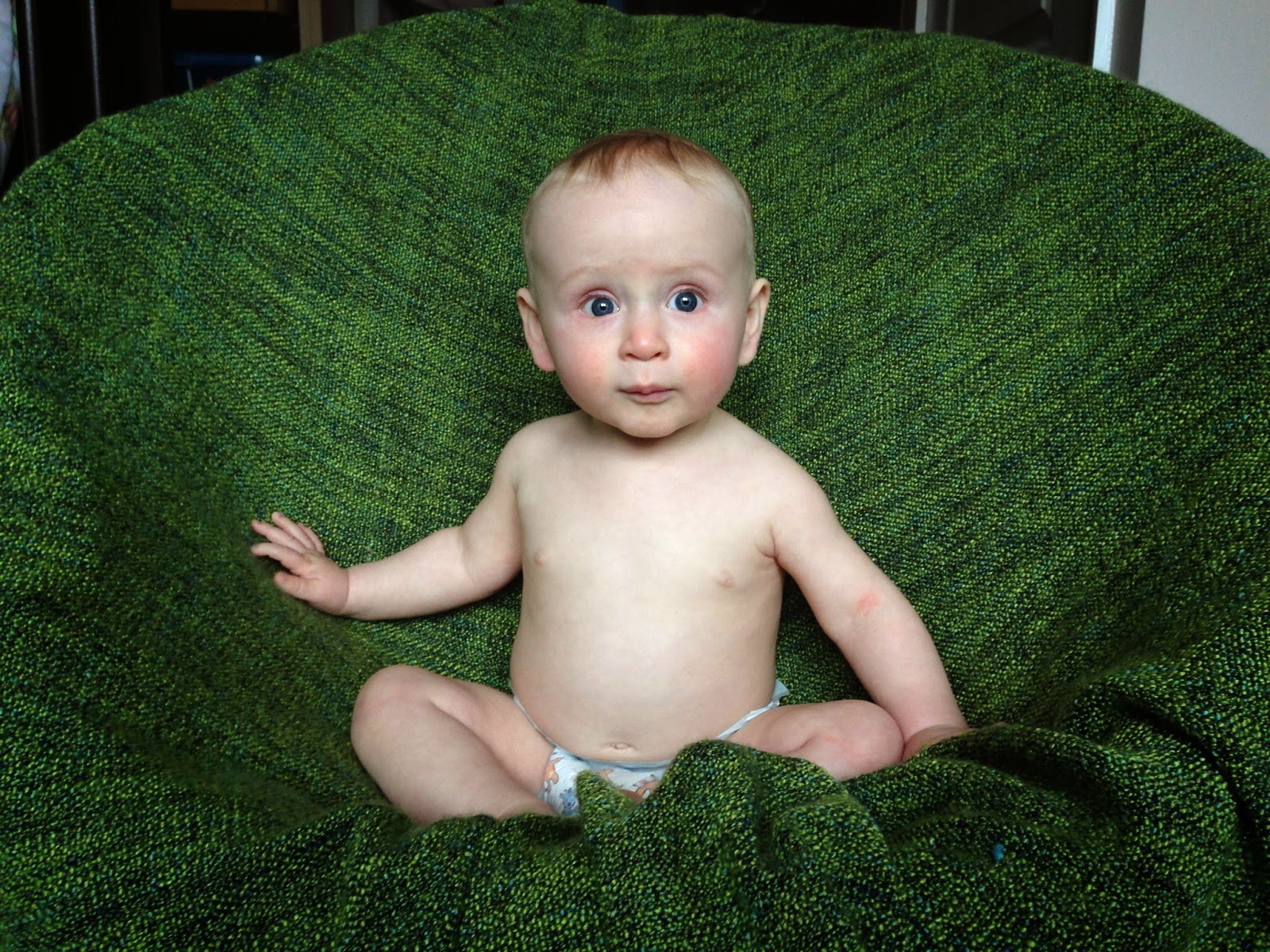 I survived another month photo shoot, just. A sickness bug struck down our household last week (hense the very overdue blog post, so much so that it will have to be broken in to two parts), so I was just getting over that and thought do I really have the patience for this? However I decided to bring the iPad in with me and put on some Yo Gabba! on Netflix and it worked a treat (for 5 minutes) for me to get some photos without LJ trying to tip himself off the chair. 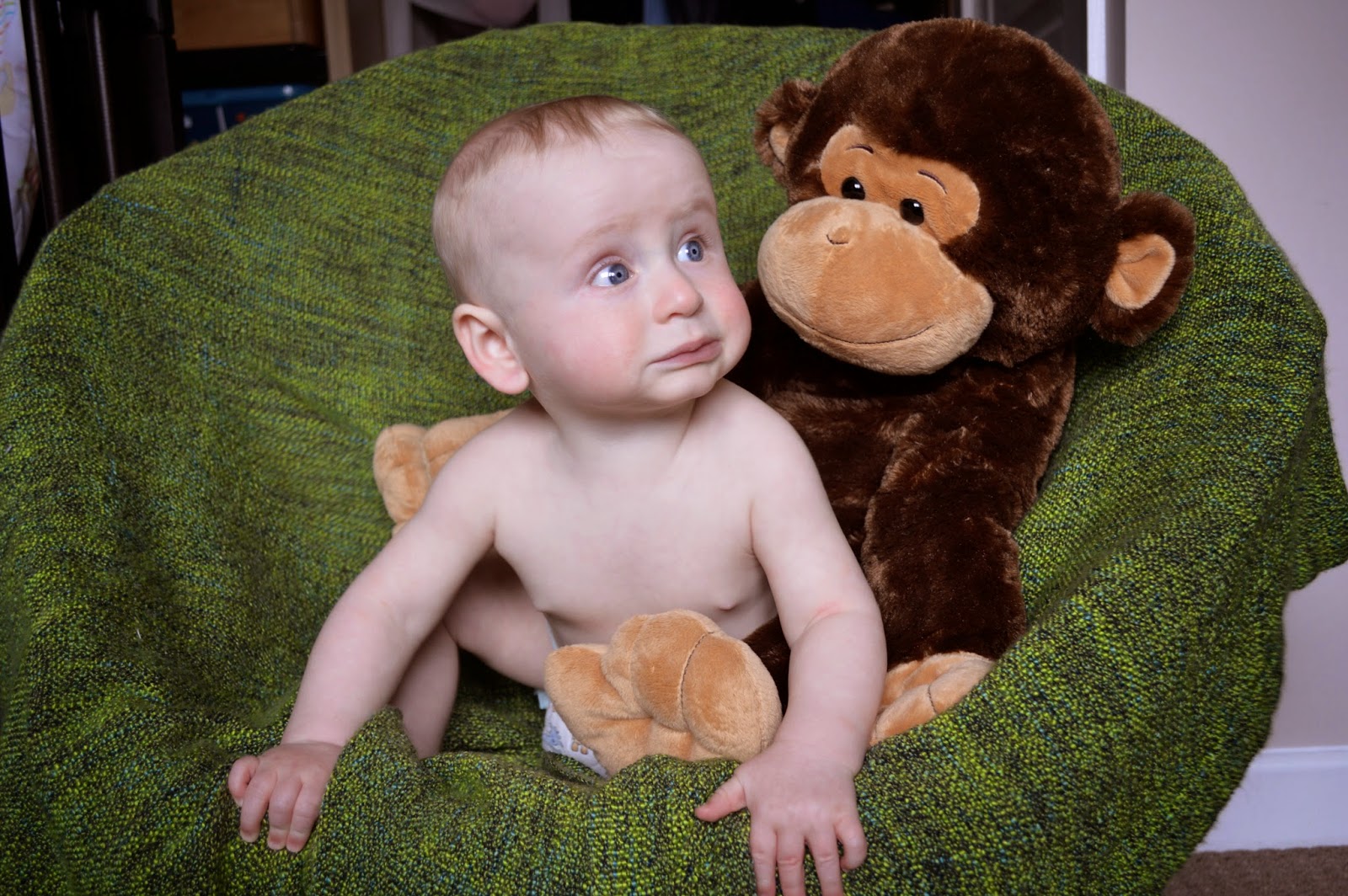 Oh and I remembered the monkey this time. 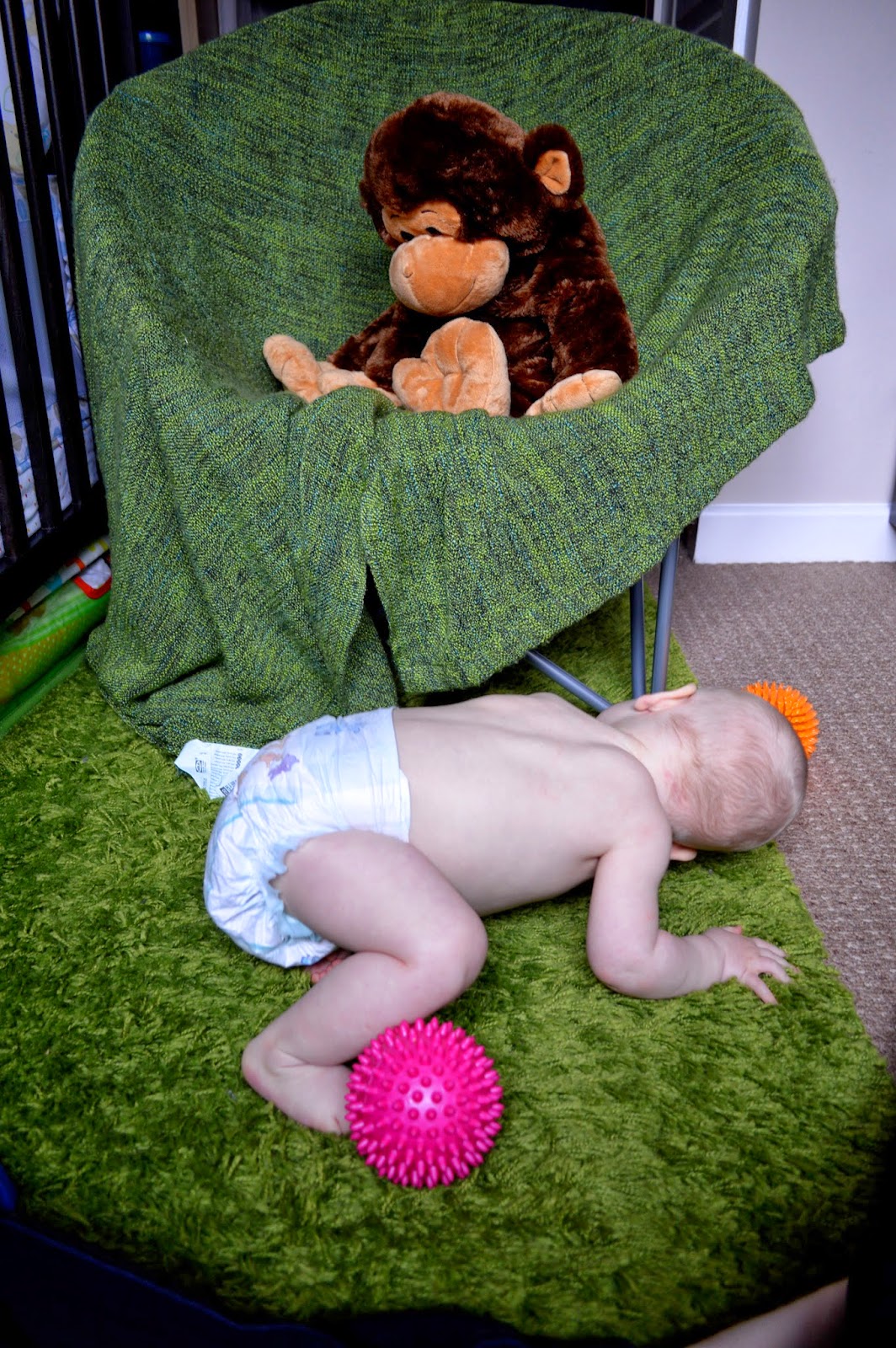 I'm very much about keeping it real and I often think when people post photos of their children, it looks like everything is always dandy and their baby is always co-operating with being happy at the camera. I know I write about these photo shoots taking their time and patience, but I thought a video would be the best way to show it, yep the older they get, the harder it gets. They MOVE.


Of course I think it's funny (after i've got my required photos) and I just love how he's exploring more and more and learning so fast. This past week i've seen him lay down with his bum in the air and look under something because he saw something roll there. This stuff amazes me. They are only 9 months old and they have learnt so much about this world and how things work. 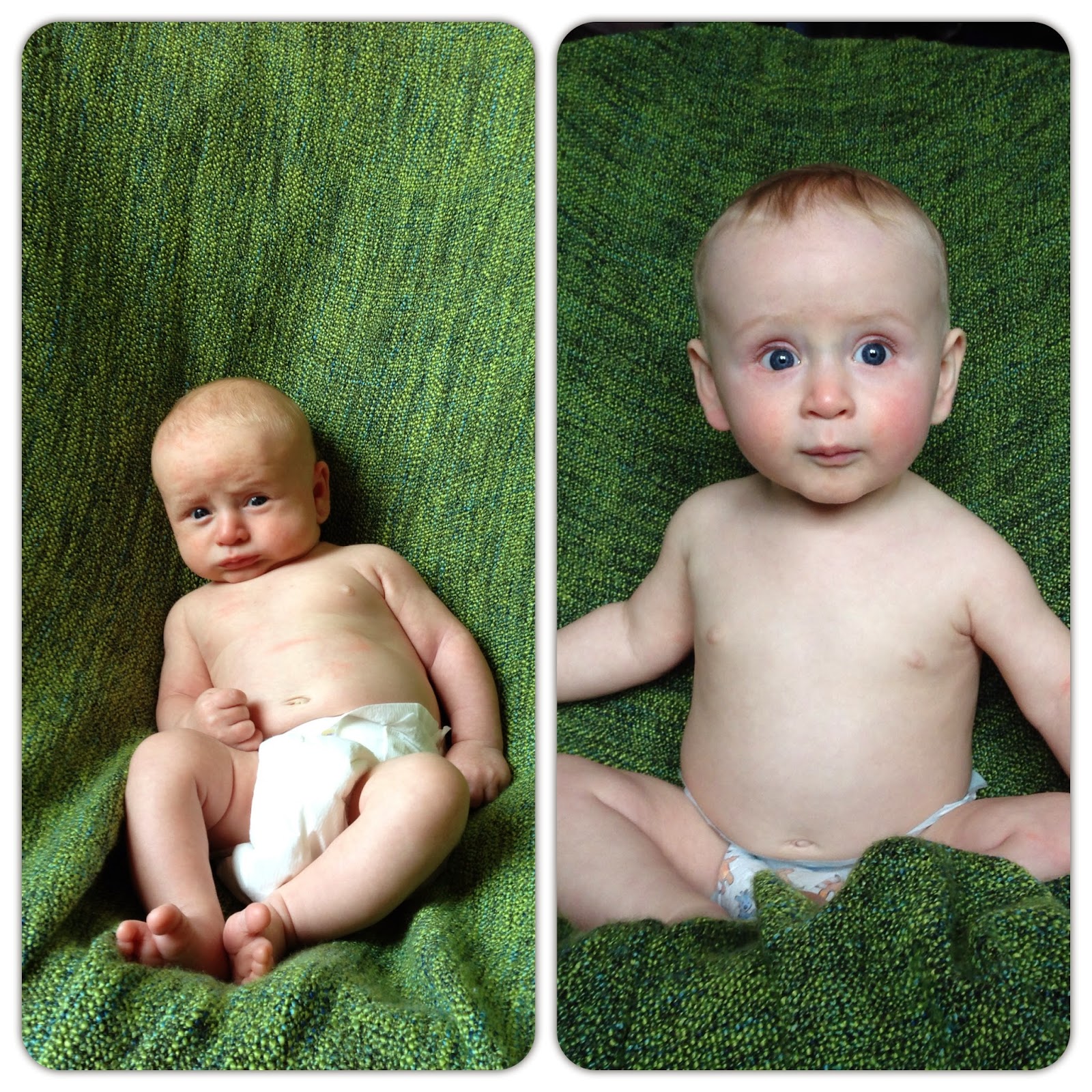 I can't wait to see this project at the end of the year. As I had a couple of different cameras through the last 9 months, they are all in different locations and i've yet to see them all together. I'm going to save that until his first birthday. This is one month and nine months though. Amazing! Babies GROW. 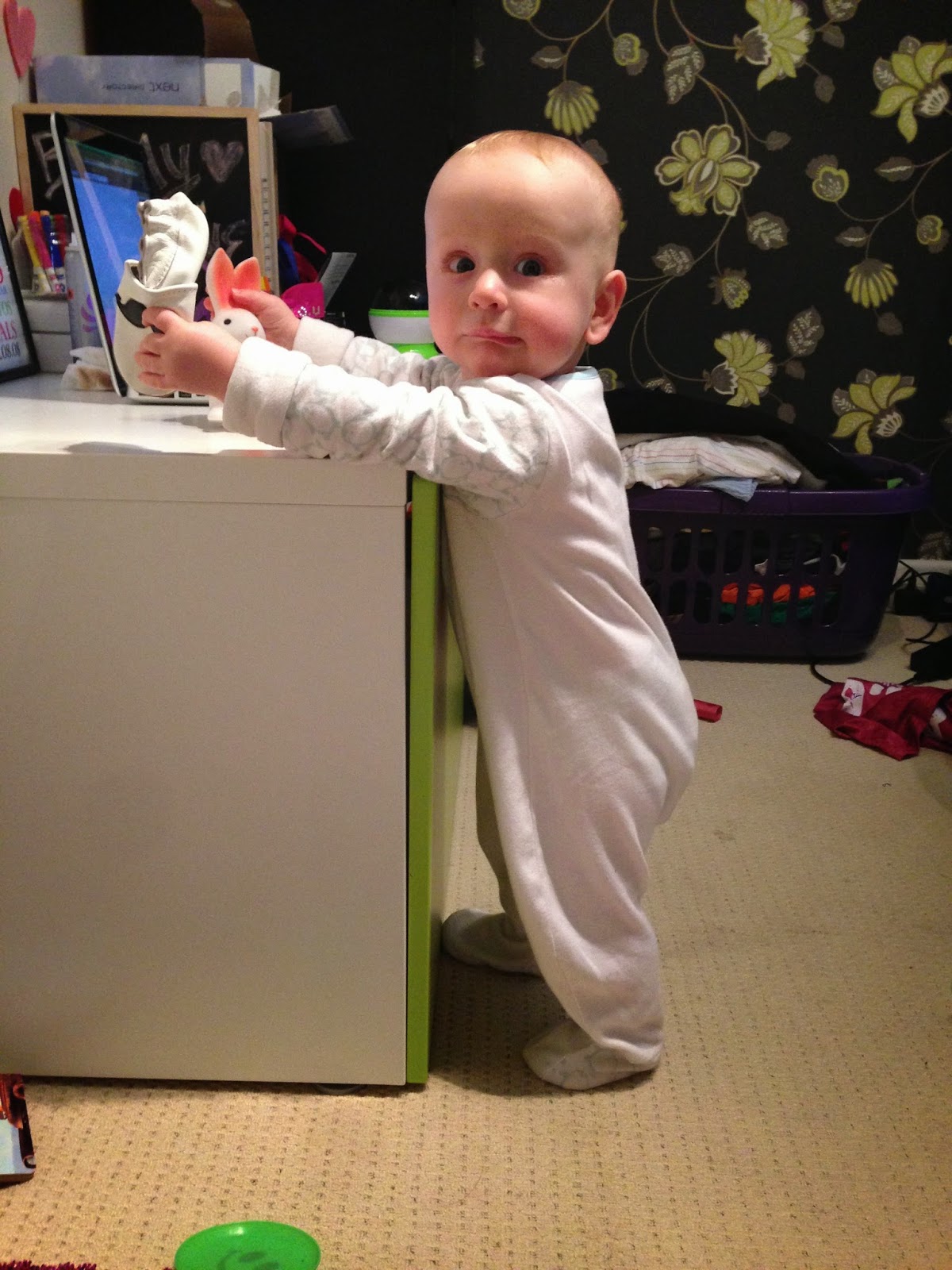 Hehe. I've also noticed how much easier he moves about and goes from sitting to crawling to pulling up to sitting back down and moving in all directions. I think maybe this is my new favourite baby age (excluding the whole more teeth thing). 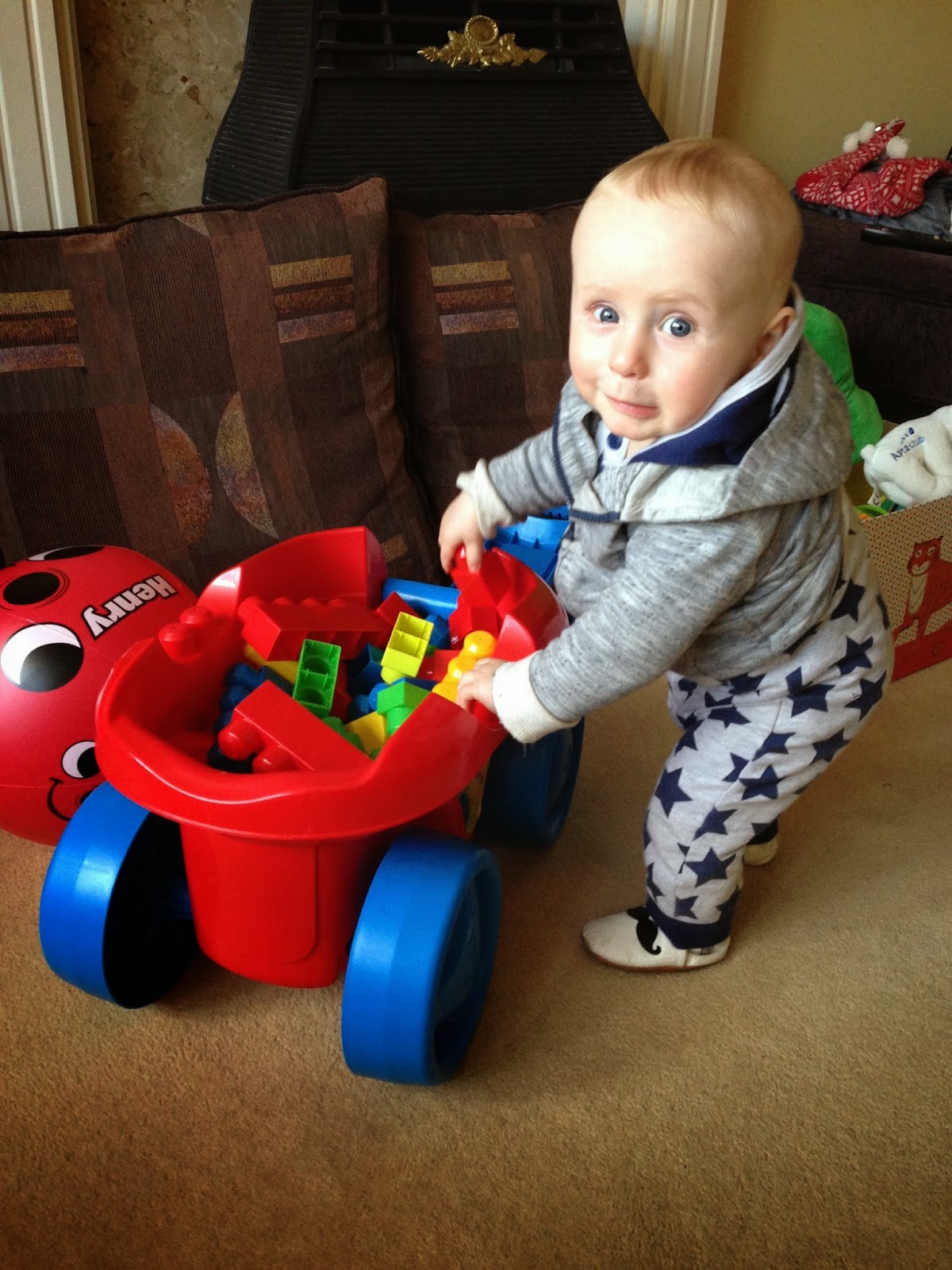 He always looks at me after he's done something with such ease, as if like, mummy, did you see what I did? I know your impressed!

I am always impressed. 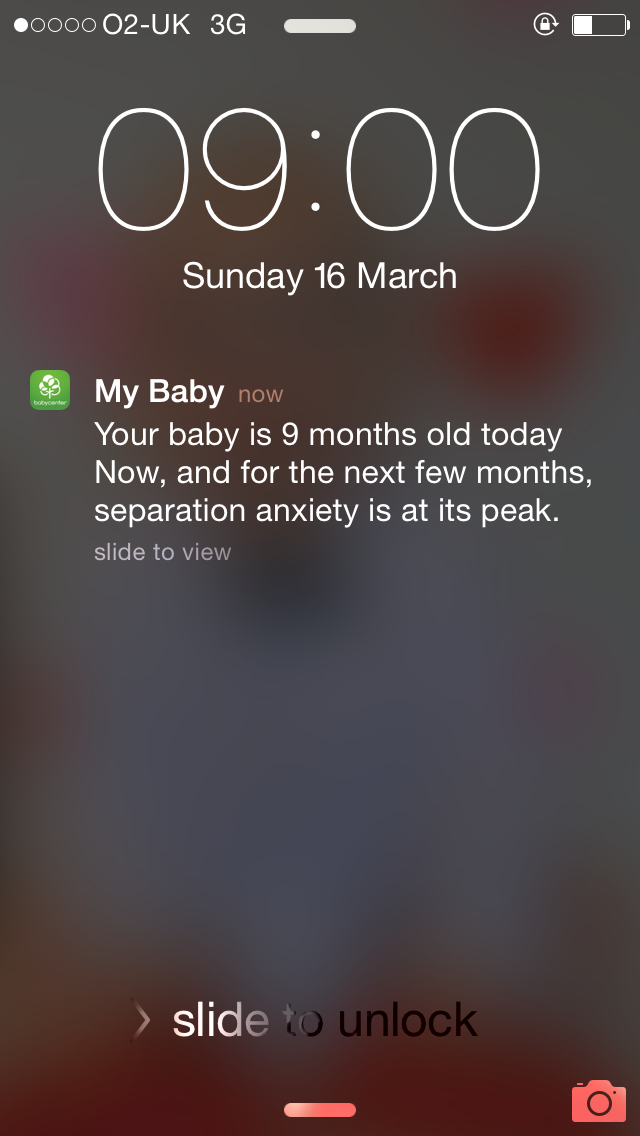 So this popped up on my phone last Sunday. My baby is a great app from Babycentre that allows you to keep up to date with what you should expect at what age. Their pregnancy app is amazing too, I highly recommend it, especially for partners who may be clueless about pregnancy! So yes, separation anxiety is at it's peak. It's been 4 weeks now since i've been back at work and things haven't got much better on the nursery front. Still on sleep strike and still so clingy and overtired the next day that we don't get much done apart from cuddles and trying to sleep. I don't know whose separation anxiety is worse, his or mine! I'm suffering big time from mummy guilt. I just hope that he will get used to it, as everyone keeps telling me. 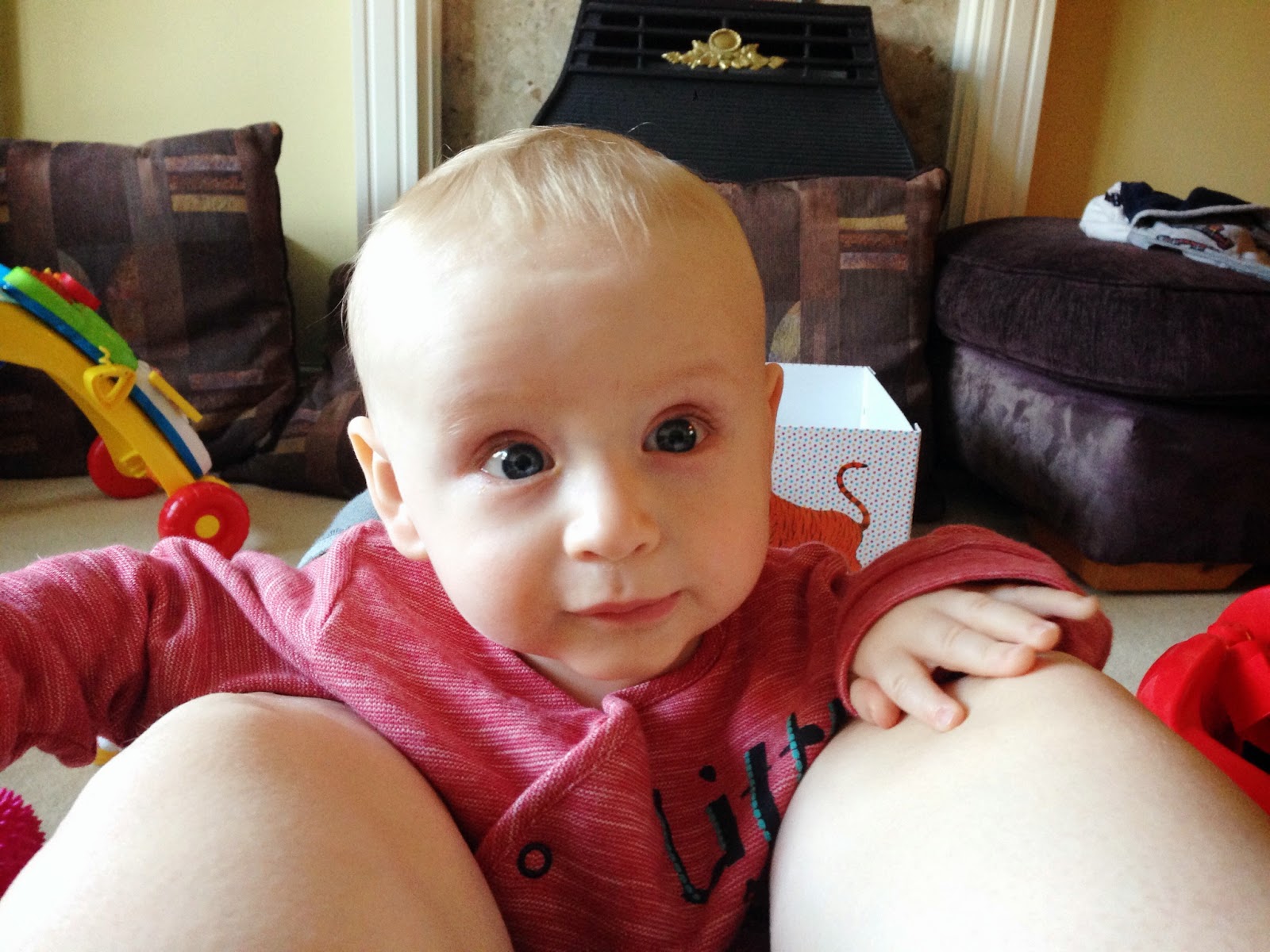 #sundaymorningmadness week 39 and 9 months by his birthday photo was for last Sunday. We snuck downstairs to play so that daddy could have a lie in, because i'm nice like that. One day i'll get a lie in without having to get up and feed first. I expect we may be ending our breastfeeding journey soon due to biting. I fear the getting him to nap in the day when he's clingy without BFing. I also may miss my naps with him after he falls asleep feeding. Mostly i'm glad that we have reached as far as we have, i'm also glad that its what properly has prevented him getting sick when we all did last week. Go mummy's antibodies!

Now if only I could get me some Anti-bodies without getting sick first... 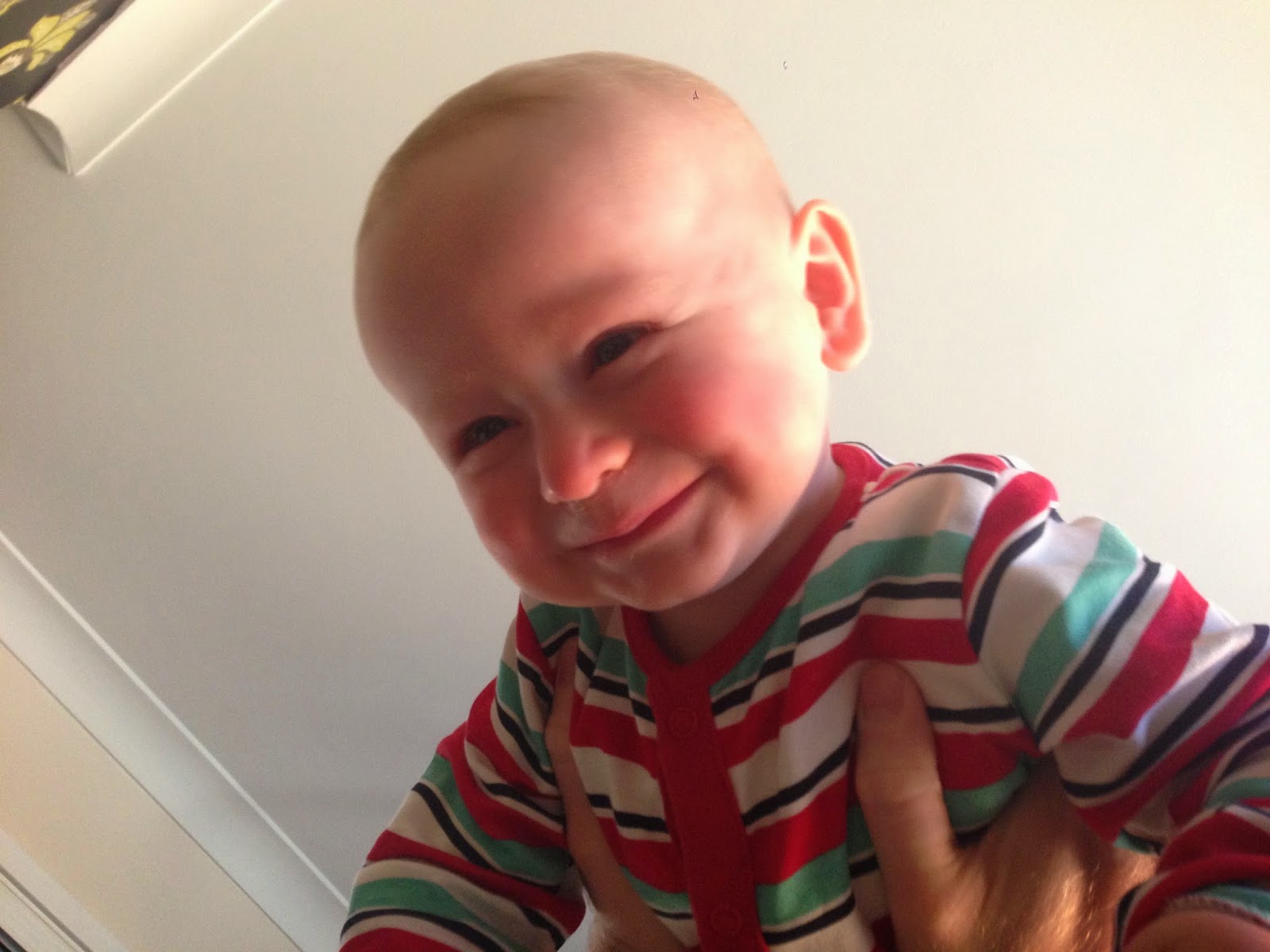 This was week 40 #sundaymorningmadness outtake photo. Basically i'd already woken up and been playing with him and taken one on and uploaded it to instagram. Eventually LJ woke his daddy up... 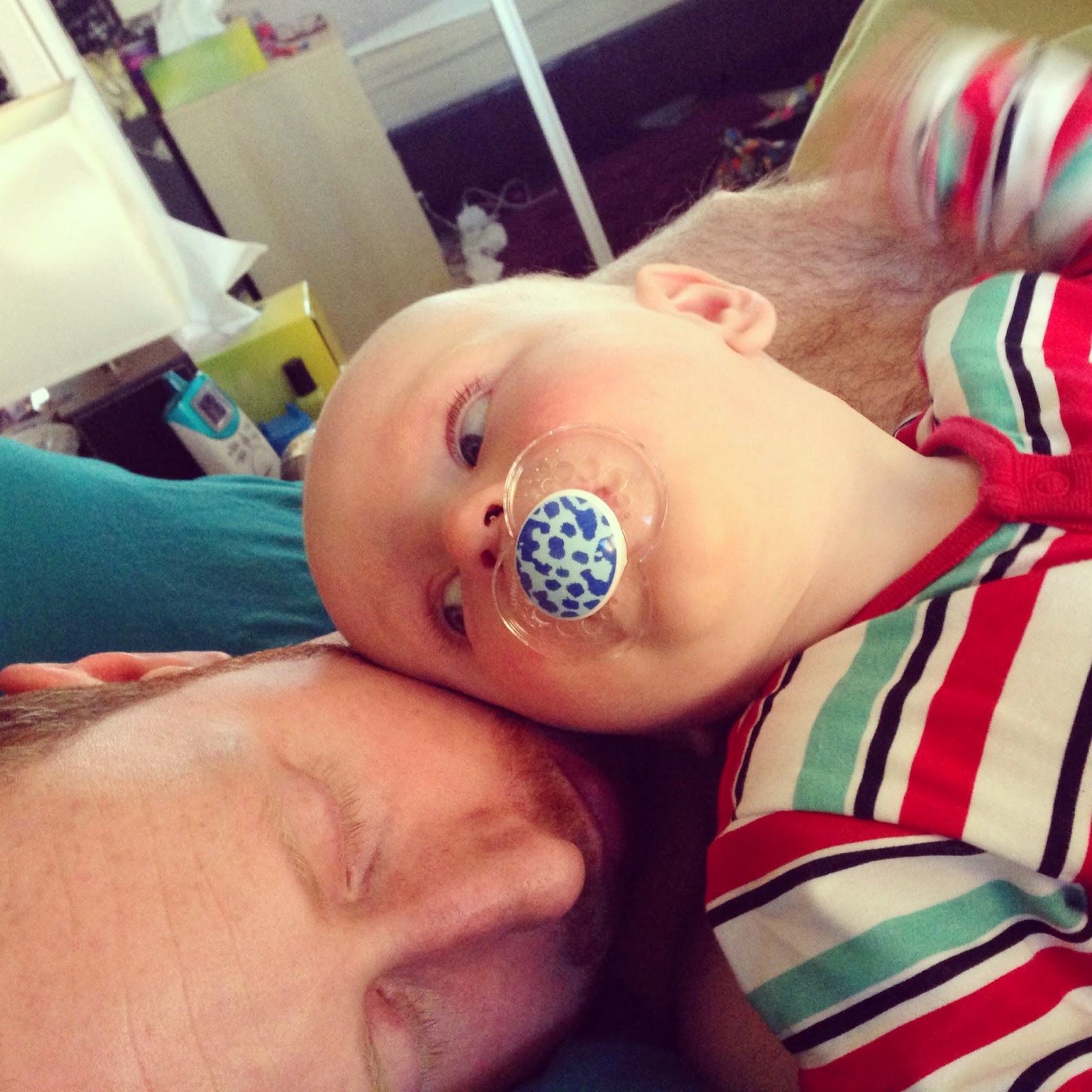 ...who then started giving aeroplane rides for some sunday morning madness, only for me to say, totally already done it. 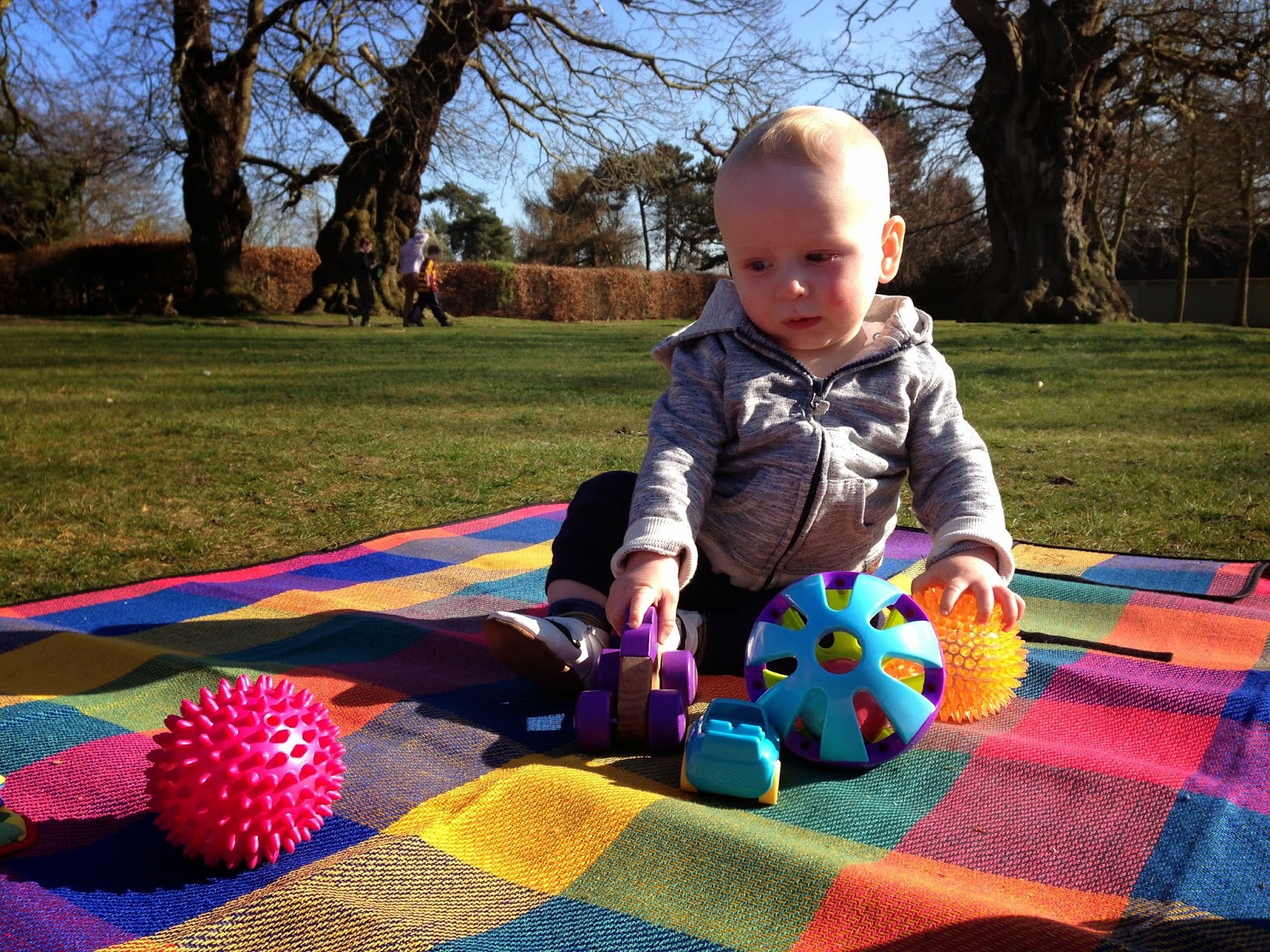 We have been loving the warmer weather the last week, which was disappointing today when we realised there was a very cold wind outside and we should have worn more layers. This photo was from last week though, LJ getting to play outside in the park with toys! He spent a lot of time in this park as a newborn, mainly lying down half naked under a shade as i'd meet up with friends for a catch up and enjoying the sun. (I got my first ever England sun tan last Summer...) So it was great to see him out playing again and enjoying the grass and the freedom. I did realise how hard it is to get a older baby to keep a sunhat on, no matter how many times we put it back on, he pulled it straight off. Luckily, the sun isn't too strong at this time of the year, in the Summer he will be under shade in the sunshine, so hopefully not too much of a worry! (Anyone who knows some good hat tricks, through them my way!) 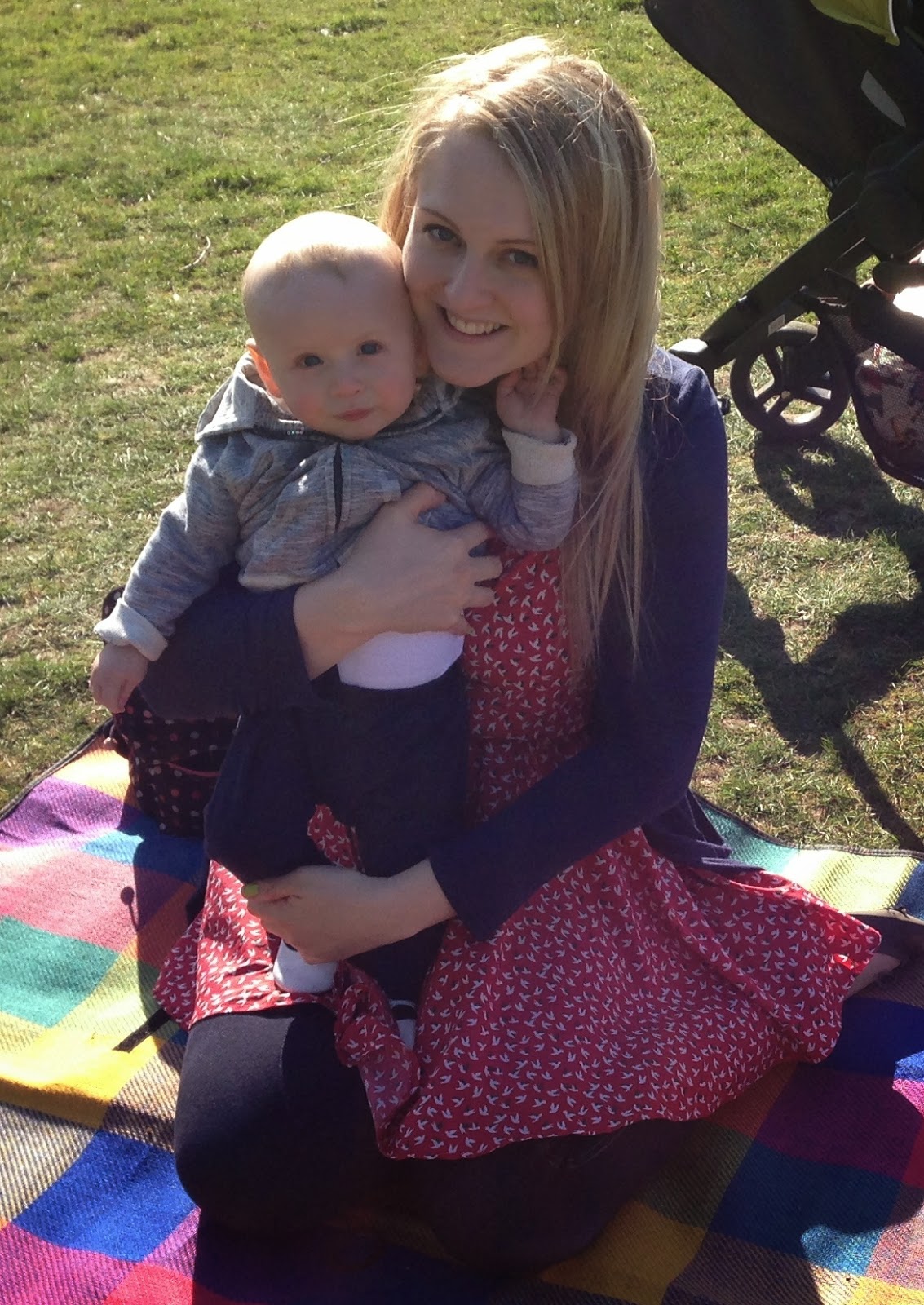 I jumped at the chance to get in on a photo with my boy! He's going to look back and think he just hung out with his daddy all the time. 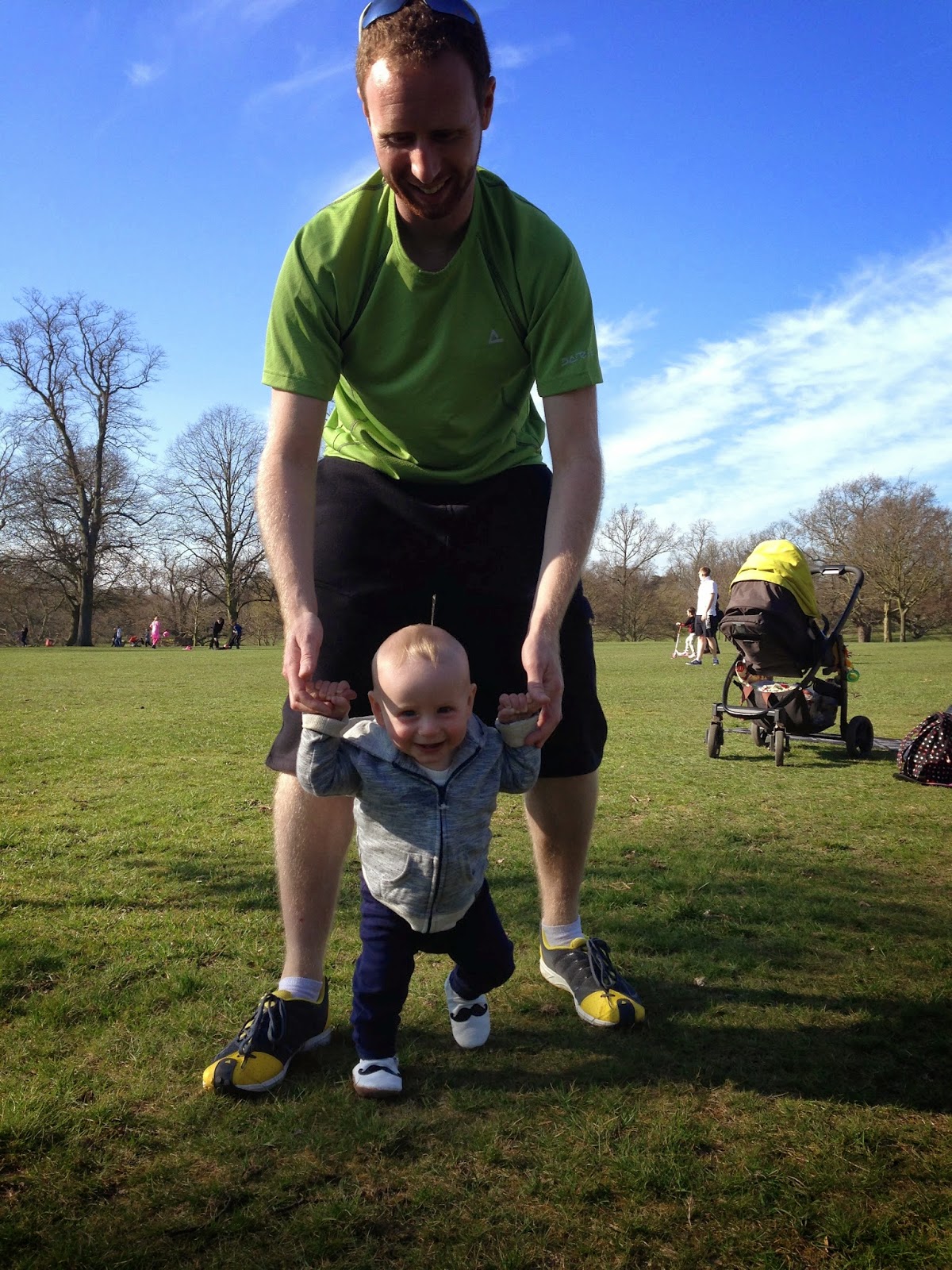 We are all still suffering from bad backs from constant walking around. Fingers crossed it's not long before he's walking it alone! We have had a few solo walks with the walker, which he does lovely, then gets scared of it and won't repeat it until he forgets a few days later. 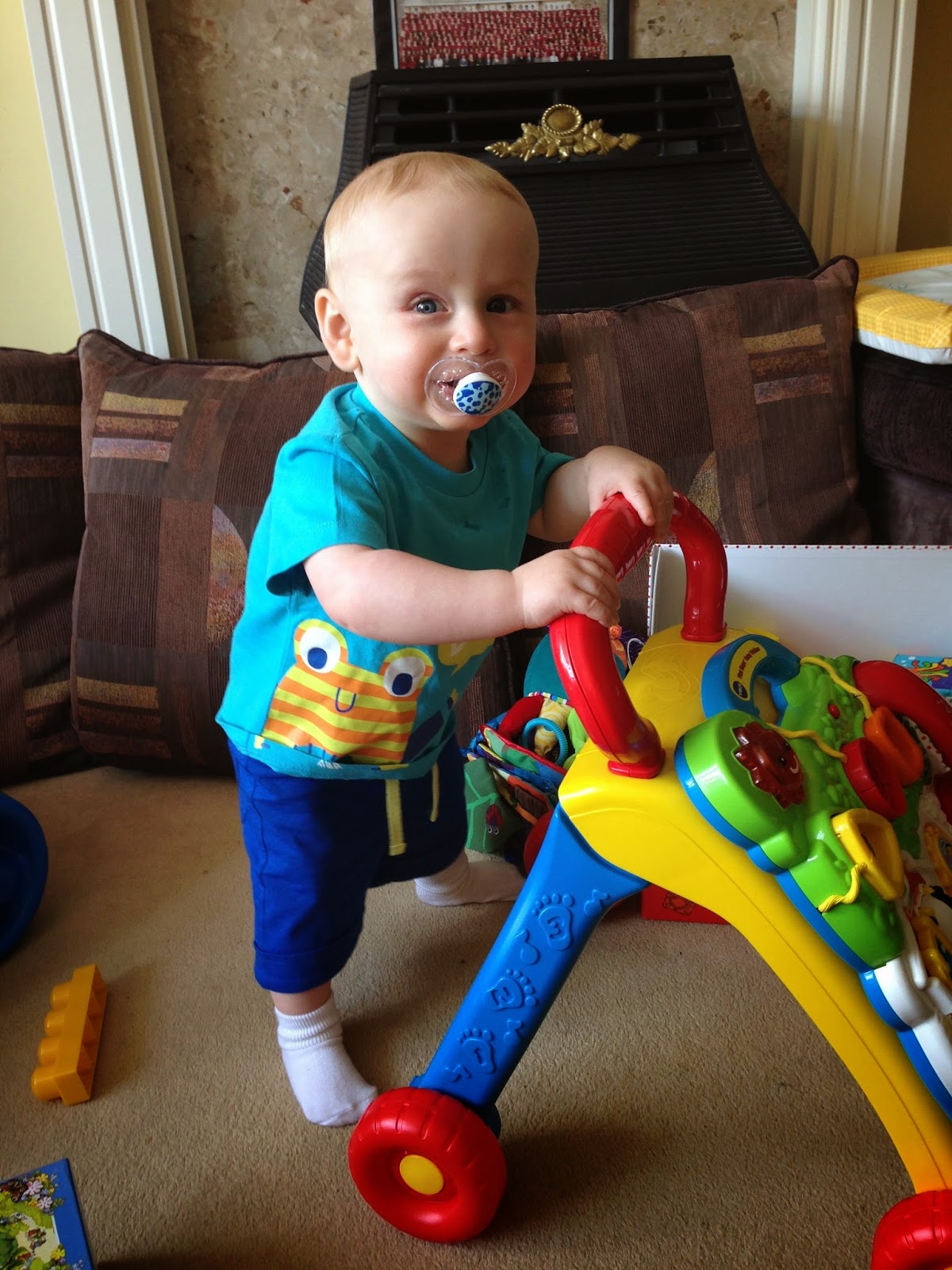 I've also experienced the first of tantrums when he doesn't get his way! Lots of throwing himself back and rolling away from bum changes. It's been a two man job to do bum changes over the weekend! I'm dreading when I have to go it alone in the week! 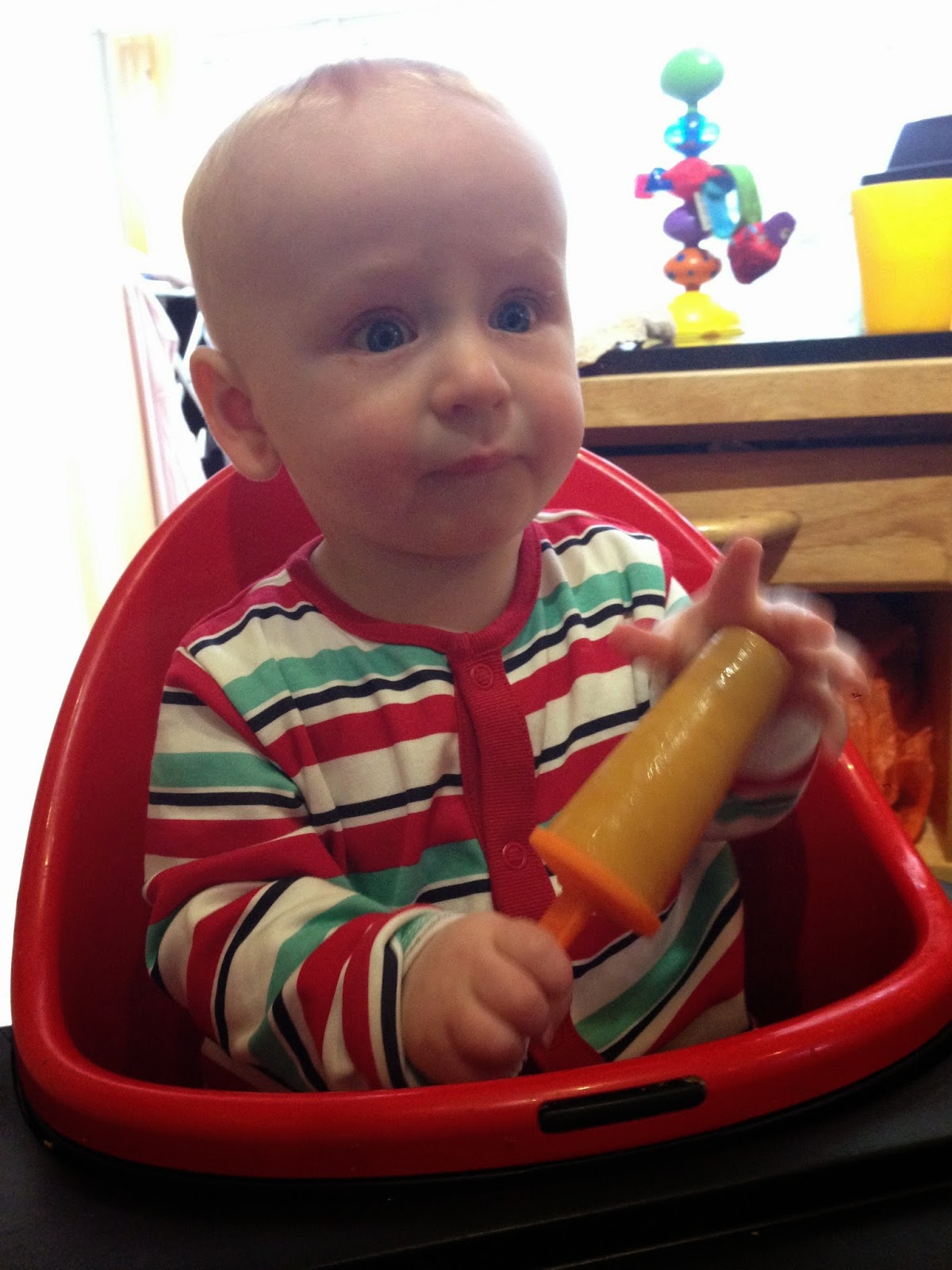 So teeth are still hurting this poor wee man. His other bottom middle tooth finally made an appearance last Tuesday and has grown a lot faster than the other one he got a month ago. The top tooth must be close to cutting as I can feel the outline of them in his gum. I tried to soothe his discomfort by making him some fruit lollies! I think he enjoyed them?!


It must be so strange to feel something that cold when your used to warm food!

I have another blog post in the process of being written, it features a very exciting product that i've been waiting to arrive for a month now. It also shows my baby keep sake box that I talked about in the last post and the little extras i've done to make it special. Apologies that this post is very 'this is what my baby has done' but they do so much at this age! I'm also planning a quarter review of the new years resolutions that I made at the start of this blog (and my reason for doing the blog in the first place!).

I guessed mermaid, but realised it could have been any of the lady legos with a skirt. Ali didn't care for her but I said we need lady legos! 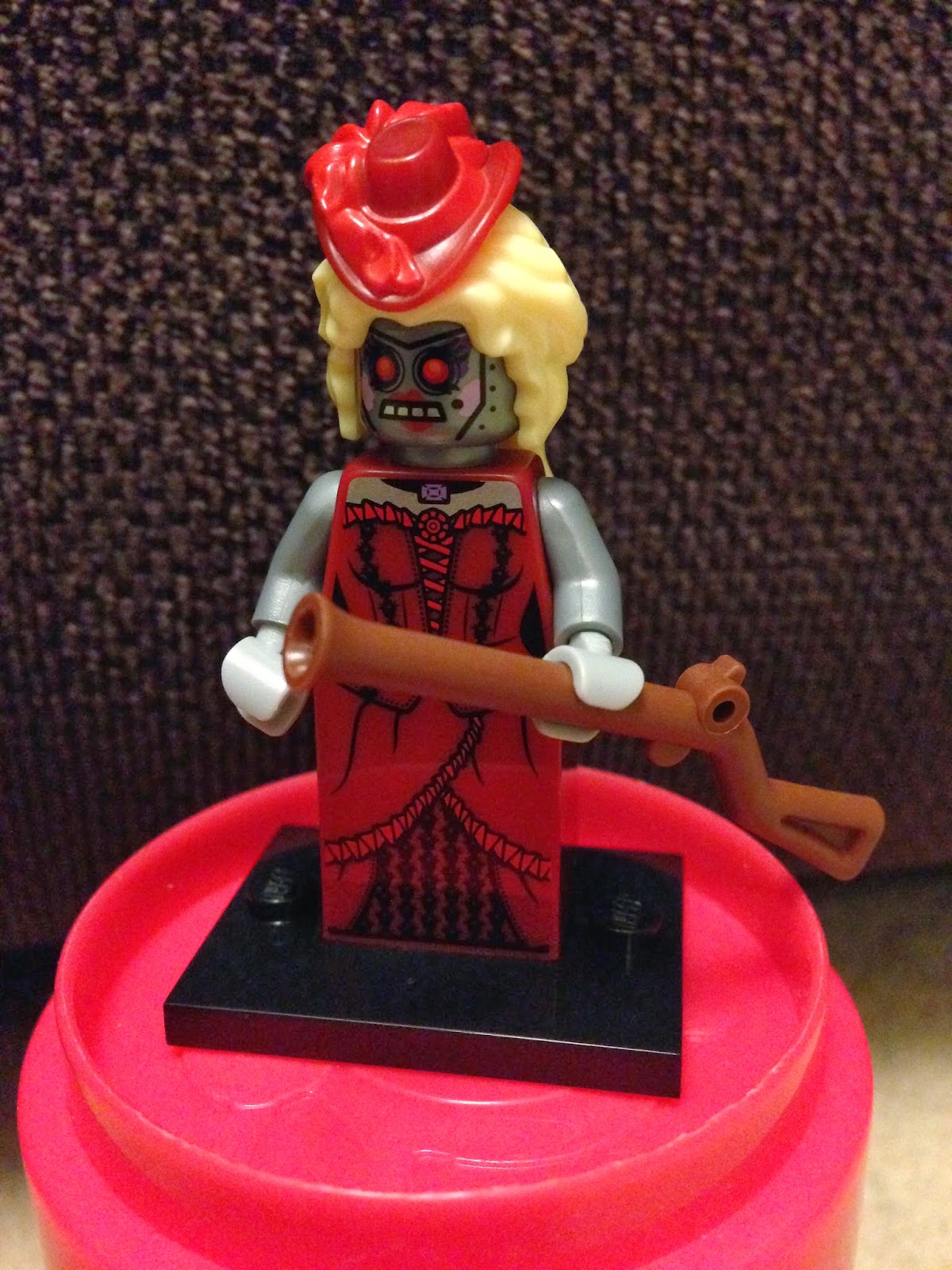 Still no doubles, but the game is getting harder!

So I hope you all had a good weekend, we managed to tick off some family time again this weekend (my one aim of a weekend) with a baby disco and teddy bear picnic at our local dance centre. LJ loved the disco! He was charging around the dance floor (with mummy or daddy arched over and back aching of course) and giving the lady babies some flirty eyes (and stealing their toys, oops). 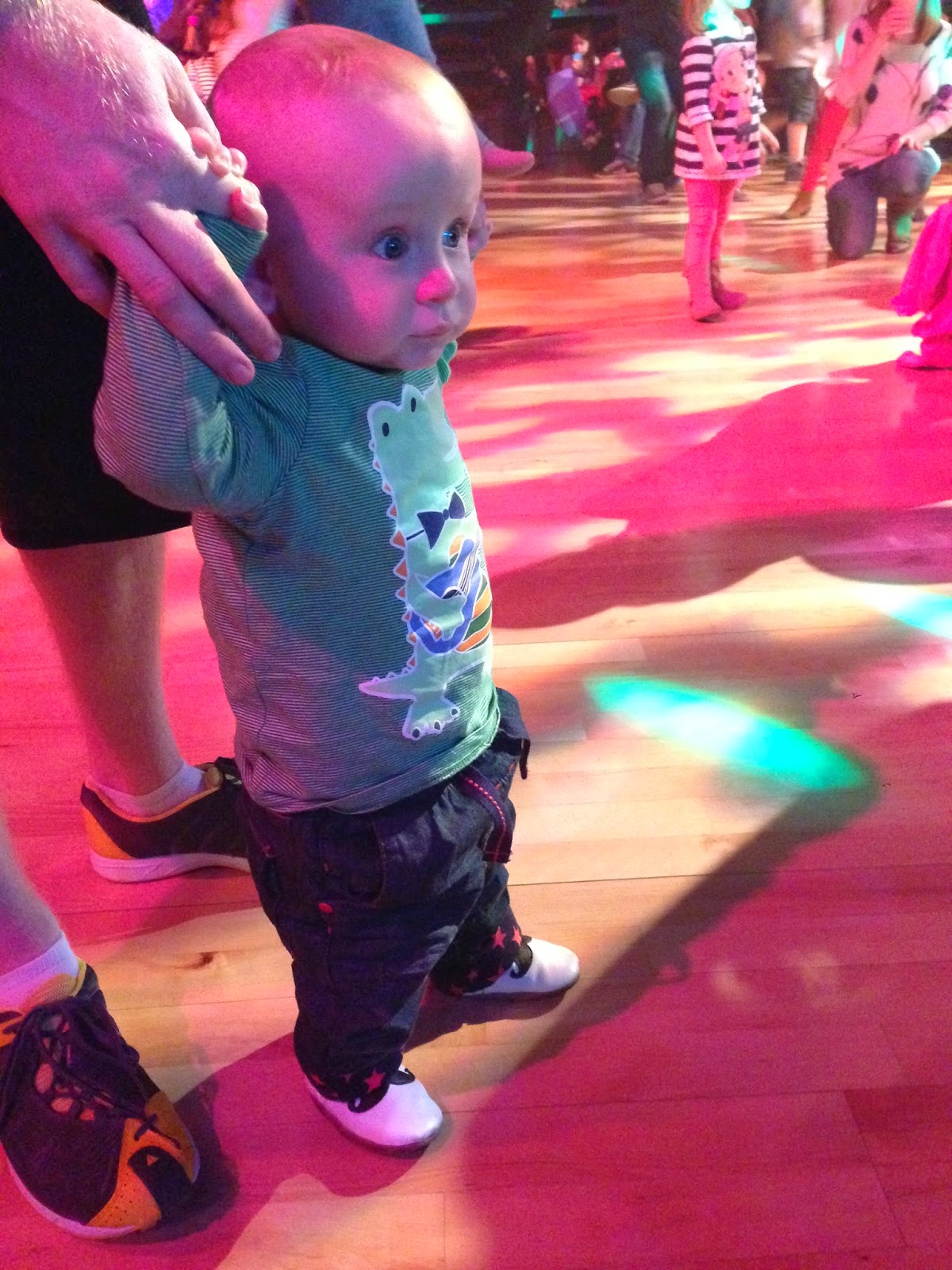 Monday tomorrow! Work time (and nursery, oh no.) I got to enjoy seeing my boy at lunchtime last week when my mum brought him in to town! That does make my day better! 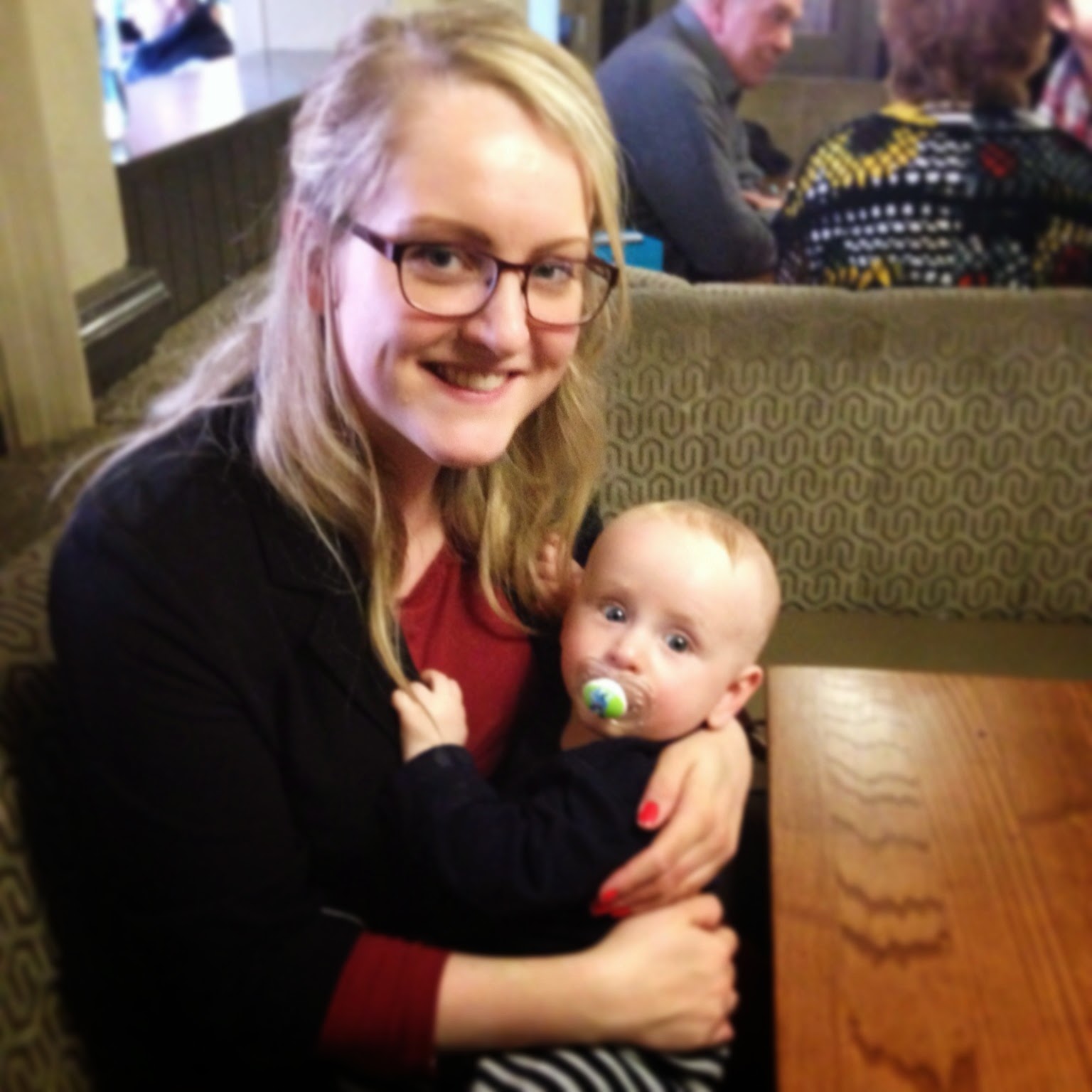 of course it means I want to sneak him back to work with me!