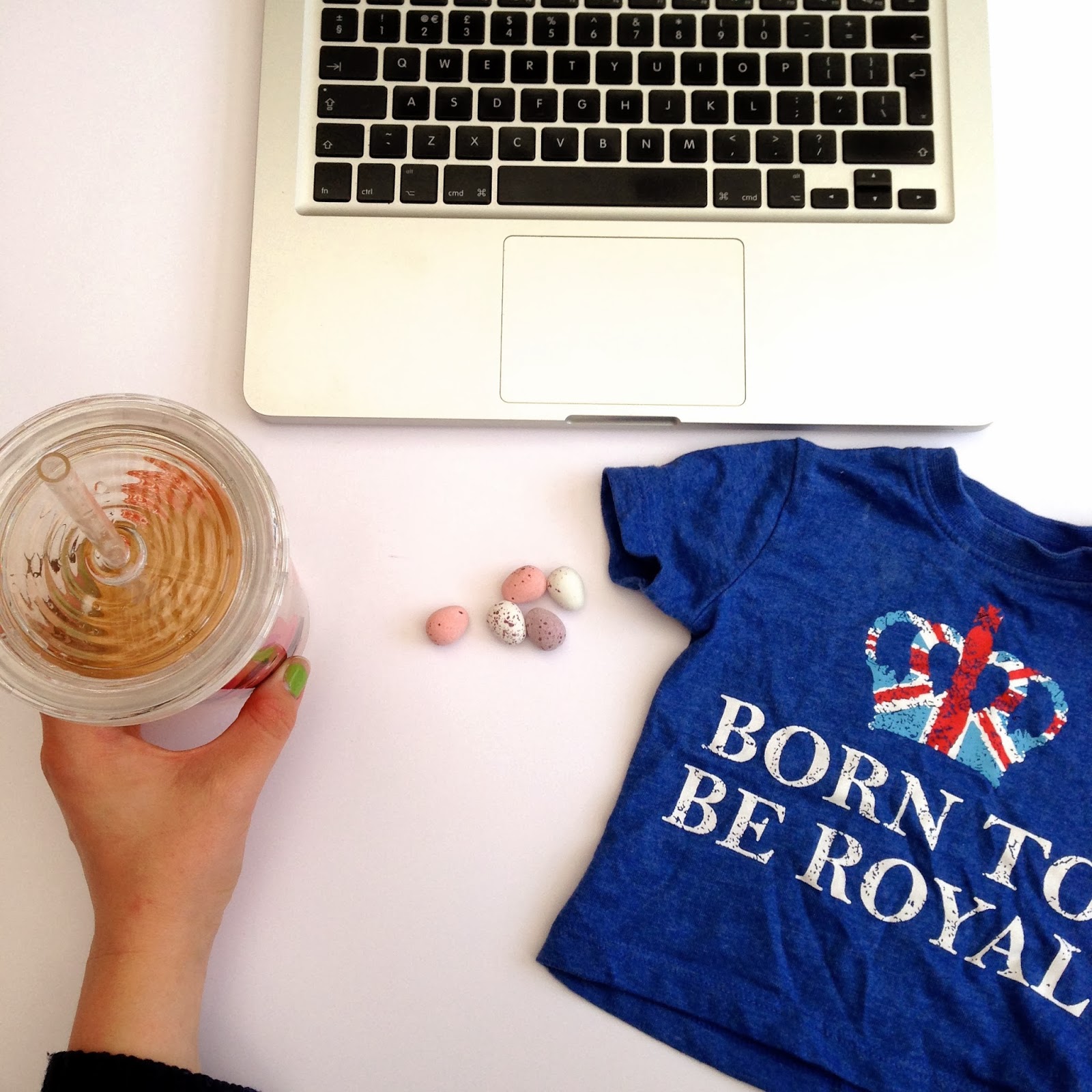 Yep.
Child free day where I wasn't out for an event or at work.
What does that mean?
I got stuff done.

On Instagram at the moment i'm following Fatmumslim's daily photo challenge. She posts up a list of daily photo themes and it allows you to think about what you may see in your day that applies to that theme or create a spin on it, or be creative. 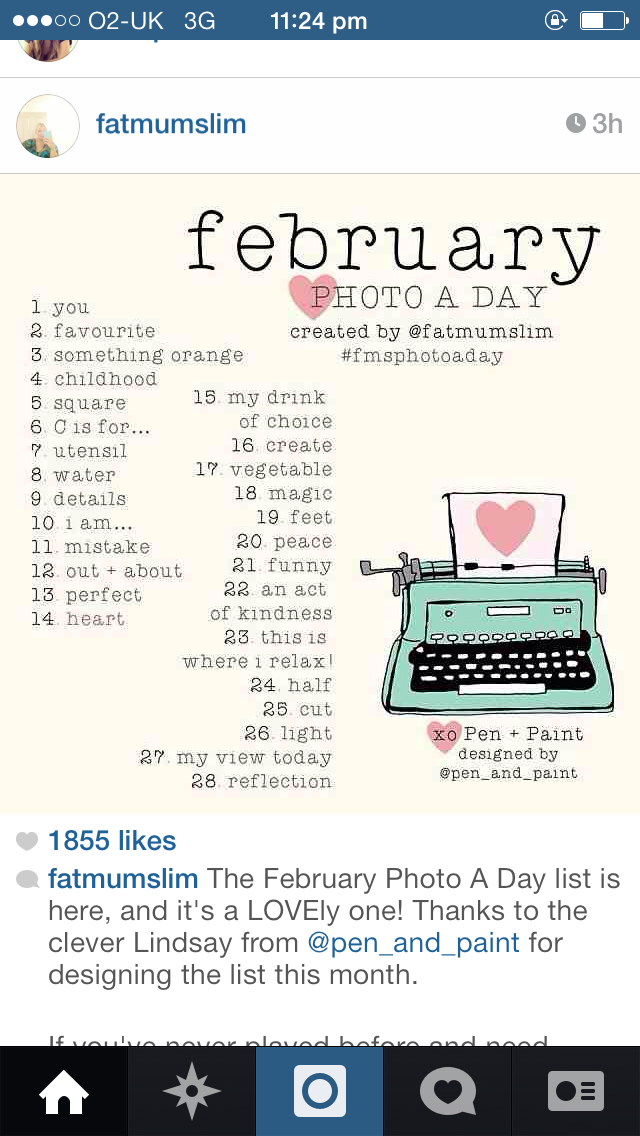 So far i'm up to date, i'm going to attempt to do the WHOLE month this time. Most the time I spend half the day thinking about what I can use for a good photo.

Basically LJ was having a trial run day at his Nannie's house as she will soon have him every other week for a day while i'm at work. We wanted to do it on a day where I wasn't actually at work and therefore if there were any issues, I could go to him.

I did however carefully plan my appointment at the dentist for this day. So after kissing LJ goodbye and holding on a little too long, I walked into town for my appointment. LISTENING TO MUSIC ON MY PHONE WITH HEADPHONES IN. I didn't even know where my headphones were until last night. I haven't used them in 7 and a half months. I've not tried it but i'm guessing it looks a bit mummy fail to be walking along pushing your baby in a buggy with headphones in. Even if they are asleep... (I once had an old lady mutter under her breath about me checking my phone on the bus while LJ slept clear in view in his pram)

Anyway, it was the start of my 'me time' day and I got to listen to some music and cross roads quickly and without fear of speeding cars (or bad curbs, see the last post!). The dentist wasn't great. I had to have a lot done as I haven't been in a few years (my bad, disorganised) and therefore I had kind of forgot that it might hurt.

It did hurt. However my theory was, bare through it, focus on a spot on the ceiling and it will be over soon. The dentist asked me if I was ok FIVE times. I must pull some weird face or go a funny colour, because when I was in the hospital after giving birth, they asked me if I was okay a dozen times too. It made me doubt myself if I did feel fine?! Do I not look fine?!

Anyway, once you've done childbirth then a couple of fillings at the dentist don't seem all that bad.

So after the dentist I enjoyed some browsing time around the shops, free of the fear of a baby meltdown. I found a new white gel pen to finish off my photo book and I purchased a couple of blue ones to write in LJ's week by week photo book too. I picked myself up this awesome plastic cup! 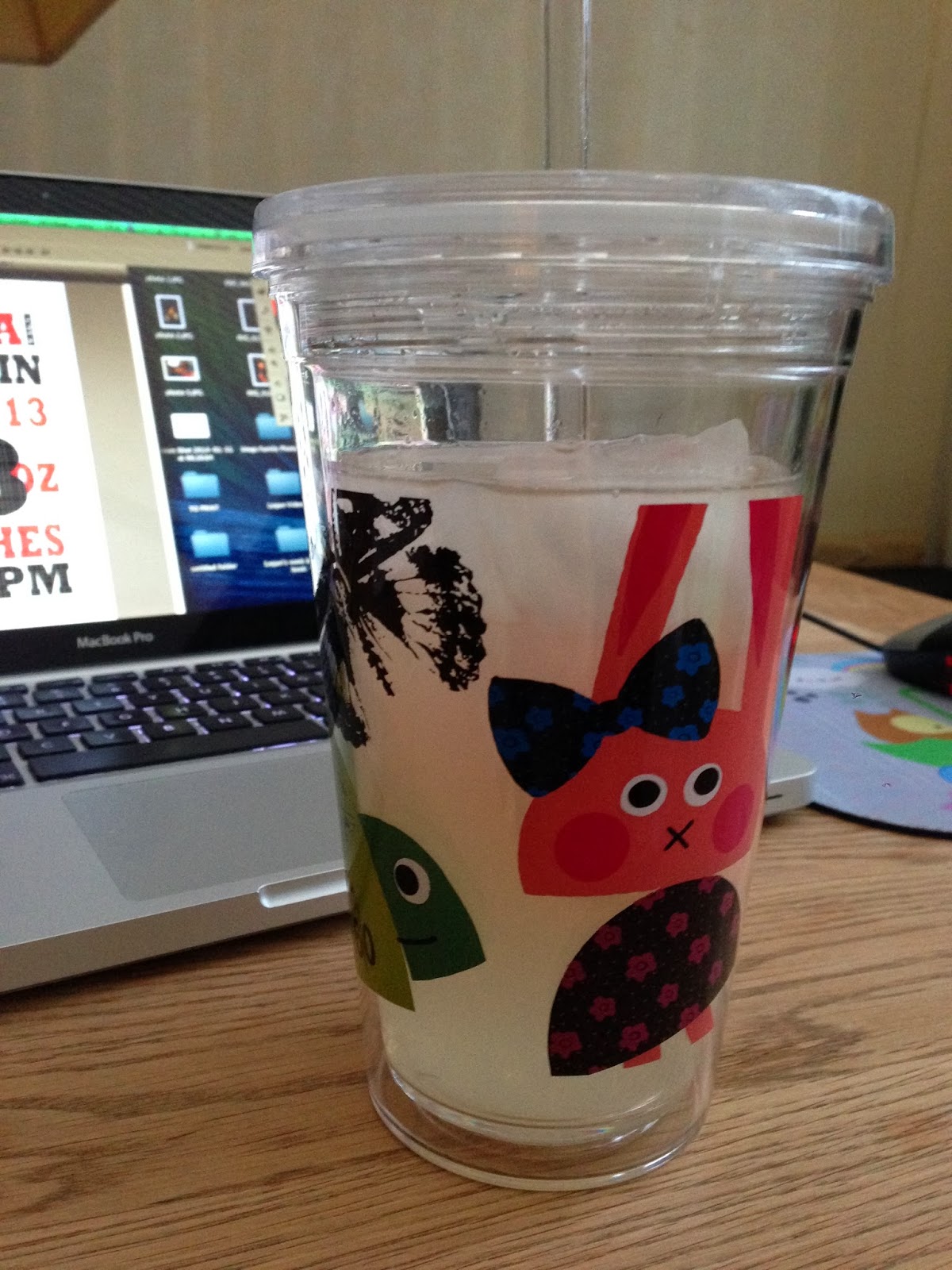 My friend at work had one she picked up in New York and I thought they were a fab idea! Then while I was browsing Paperchase, (I love to just look at EVERYTHING in that store) I spotted this one for £6 and just had to have it! I've enjoyed drinks from it all afternoon with some ice in to make me feel like i've got something more special than lemon squash.

I then headed to Poundland to pick up some Vacuum storage bags, they are by far the best buy for your money as they are around £5 for two bags in Wilko's but just £1 for one bag of a bigger size (and lavender scented) from Poundland. I picked up 5 as i've been waiting to get them for ages!

Back home I knew I had some organising and sorting to jump in to! When we moved house, I packed all LJ's newborn and most of his 0-3m clothes and put them in vacuum bags and stored them in the loft at dads when we moved in. Since that time, i've not done anymore storing of clothes. I've just popped all the clothes that no longer fit LJ in bags and shoved them out of sight until I had a moment to deal with them. 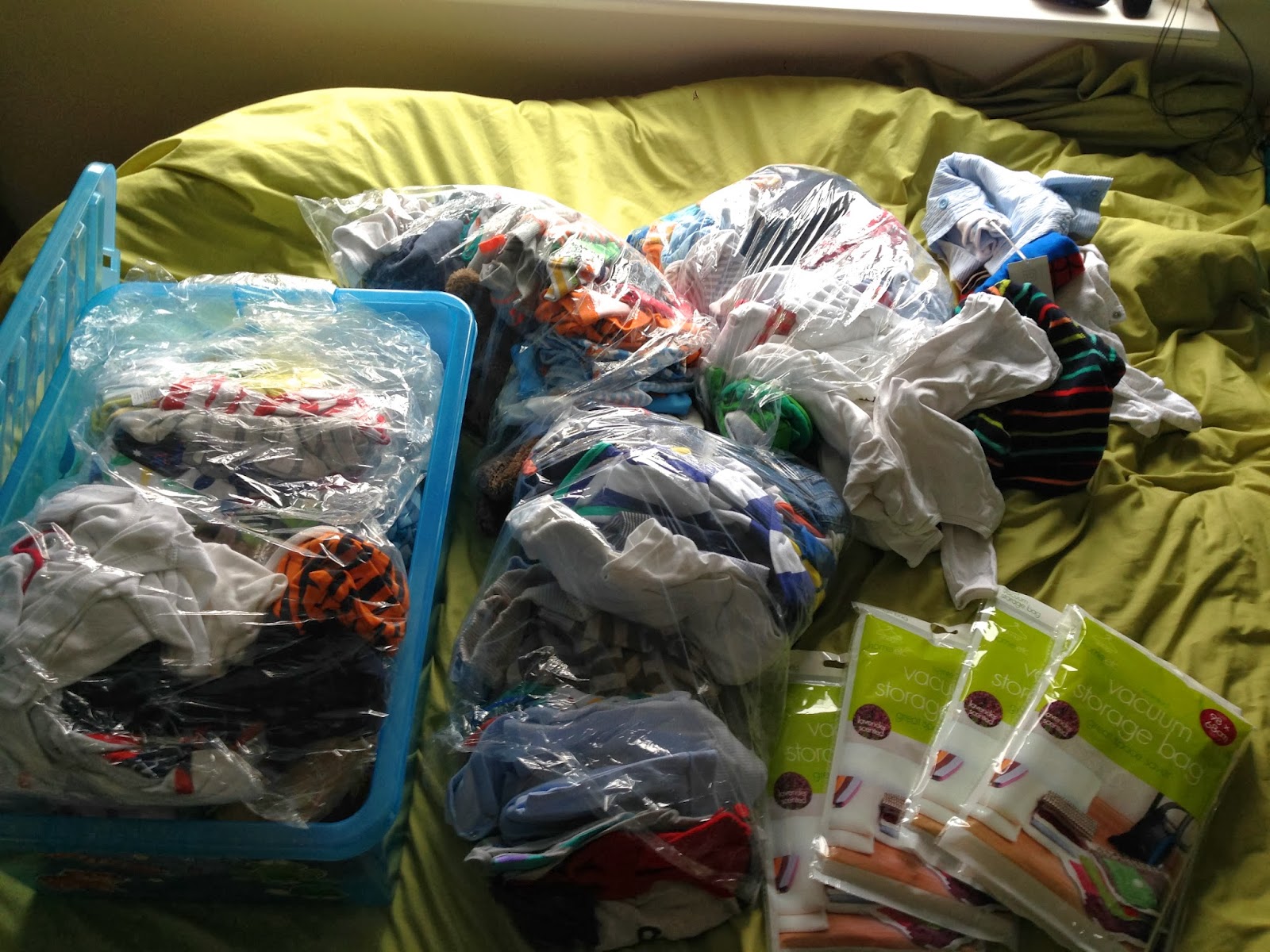 That's all his 3-6m stuff and some left over 0-3m stuff that he was still squeezing in to. So I had fun reminiscing over all his little clothes and wondering how he ever was so small to fit in them as I organised them in to piles and popped them in two bags and marked them up. 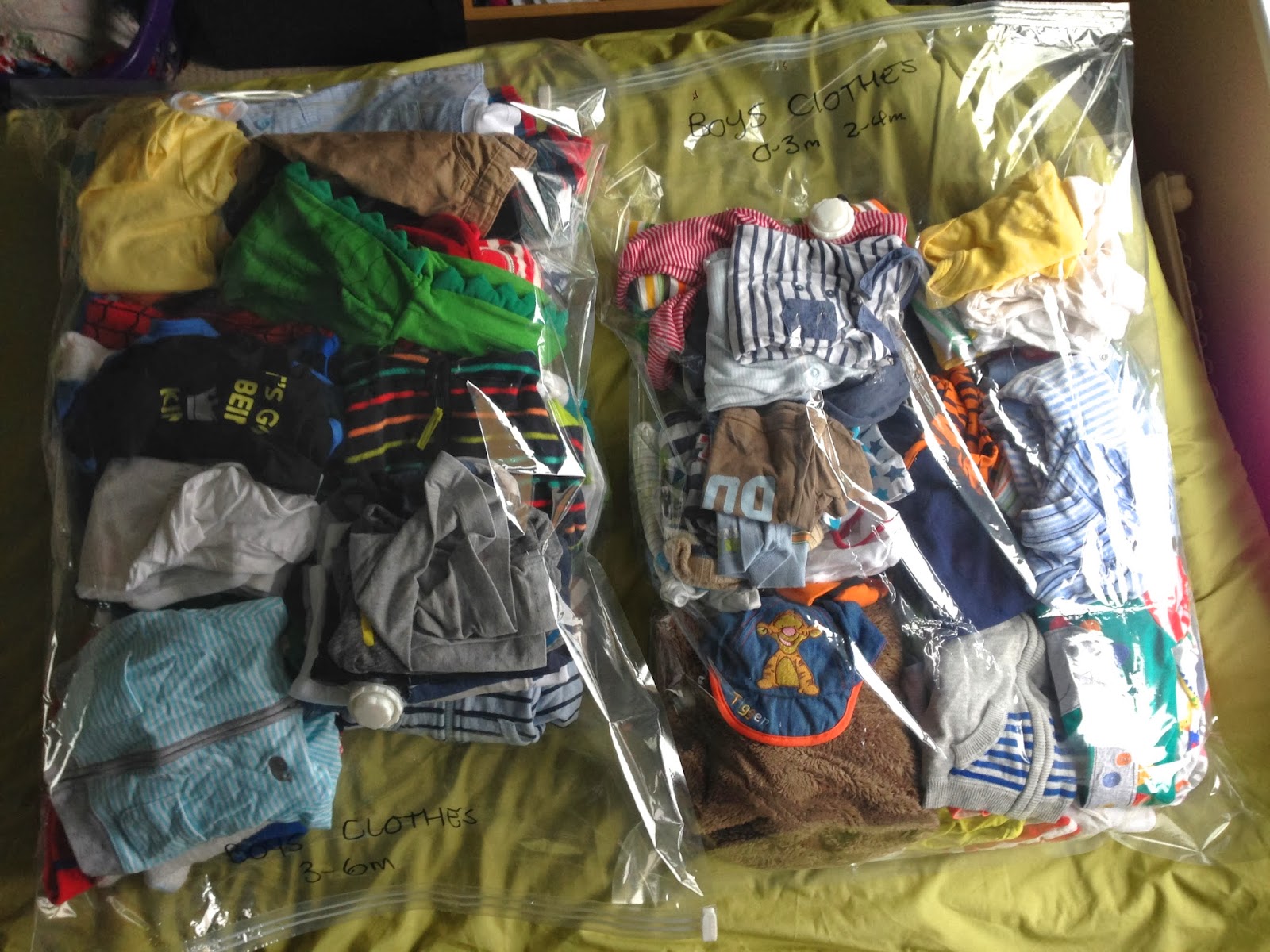 Just as well baby clothes are small. I could fit all his 3-6m in one bag! He must have had tons of newborn and 0-3m stuff as i'm sure they are in about 3 bags in total, including the ones I did before. 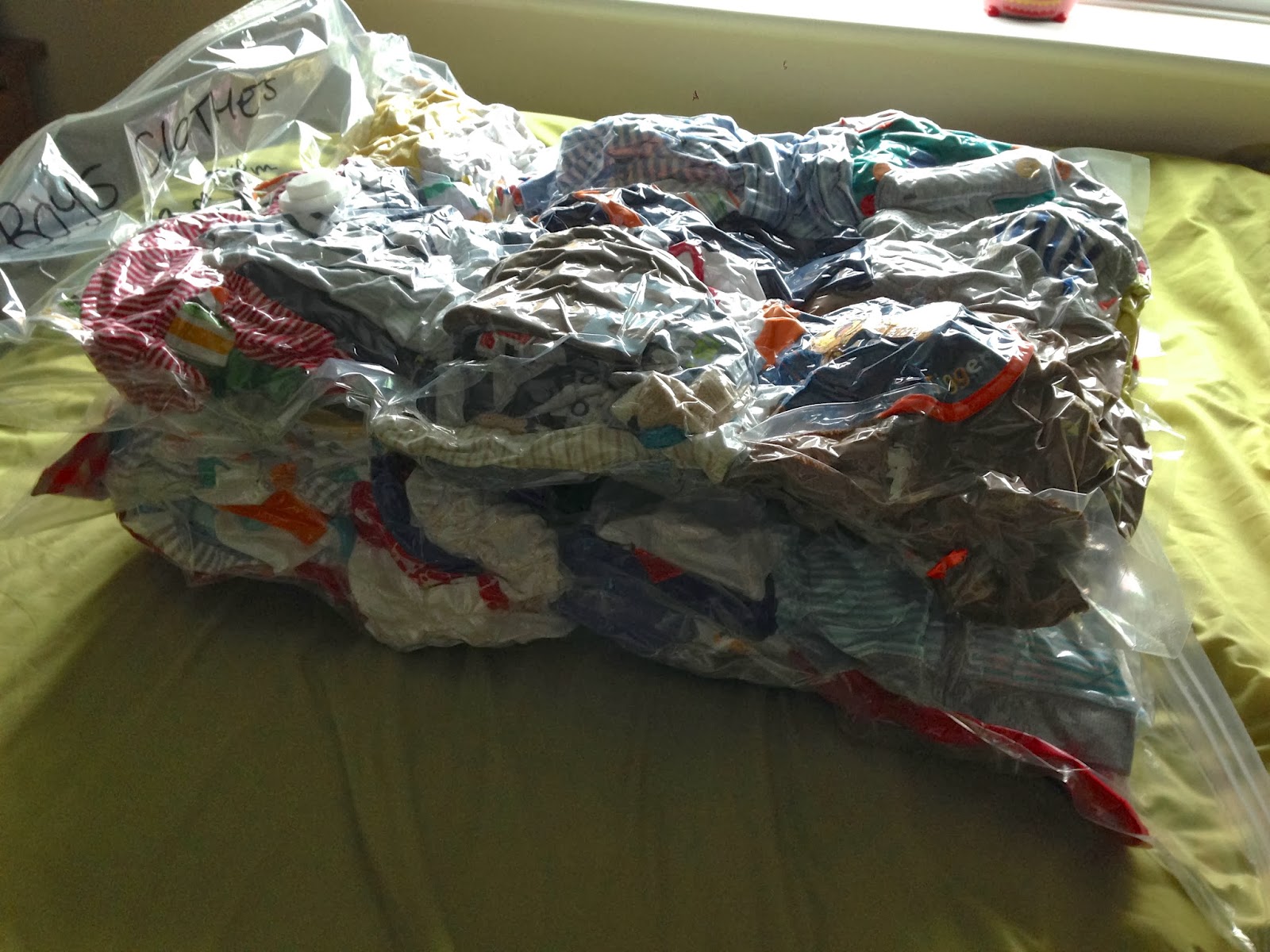 Two bags lovely and compressed and all my baby clothes saved ready for a future bubba. Right Ali? ... Ali?

Yep the latest is he's never having another baby because they don't sleep. I'm still holding out for a chilled out baby that sleeps on his/her own with no problems. That's the deal right? If you get a super active baby that never wants to sleep first time round?

I've kept some of LJ's special clothes for a memory box (another thing on the list to do!) such as his first baby Gro that Daddy got him dressed in as well as his first little hats, a Cardi knitted by his Great-Grandma, a royal baby t-shirt to remember he was born into Royal baby fever and his first halloween and Christmas tops.

Feeling satisfied that i'd finished a long awaited job and it was only midday, I went about tackling another thing thats bugged me for months. The wardrobe in LJ's room. LJ's room used to be my brothers room, he has since long moved to London but apparently left half his clothes here! (My dad is NEVER allowed to move home or downsize because where would all of us kids store are crap that we want to keep but don't want to keep with us?!)

There is no before picture of the wardrobe as it was in such a state I just jumped right in. I used the remaining 3 vacuum bags to put all my brothers clothes in and they are awaiting him to sort out! I then used a funky bag to put all his left behind shoes in and put them up out of reach. Then I tidied up the remaining things. I still need to sort mine and Ali's clothes that we have stored there but for now it looks tons better. 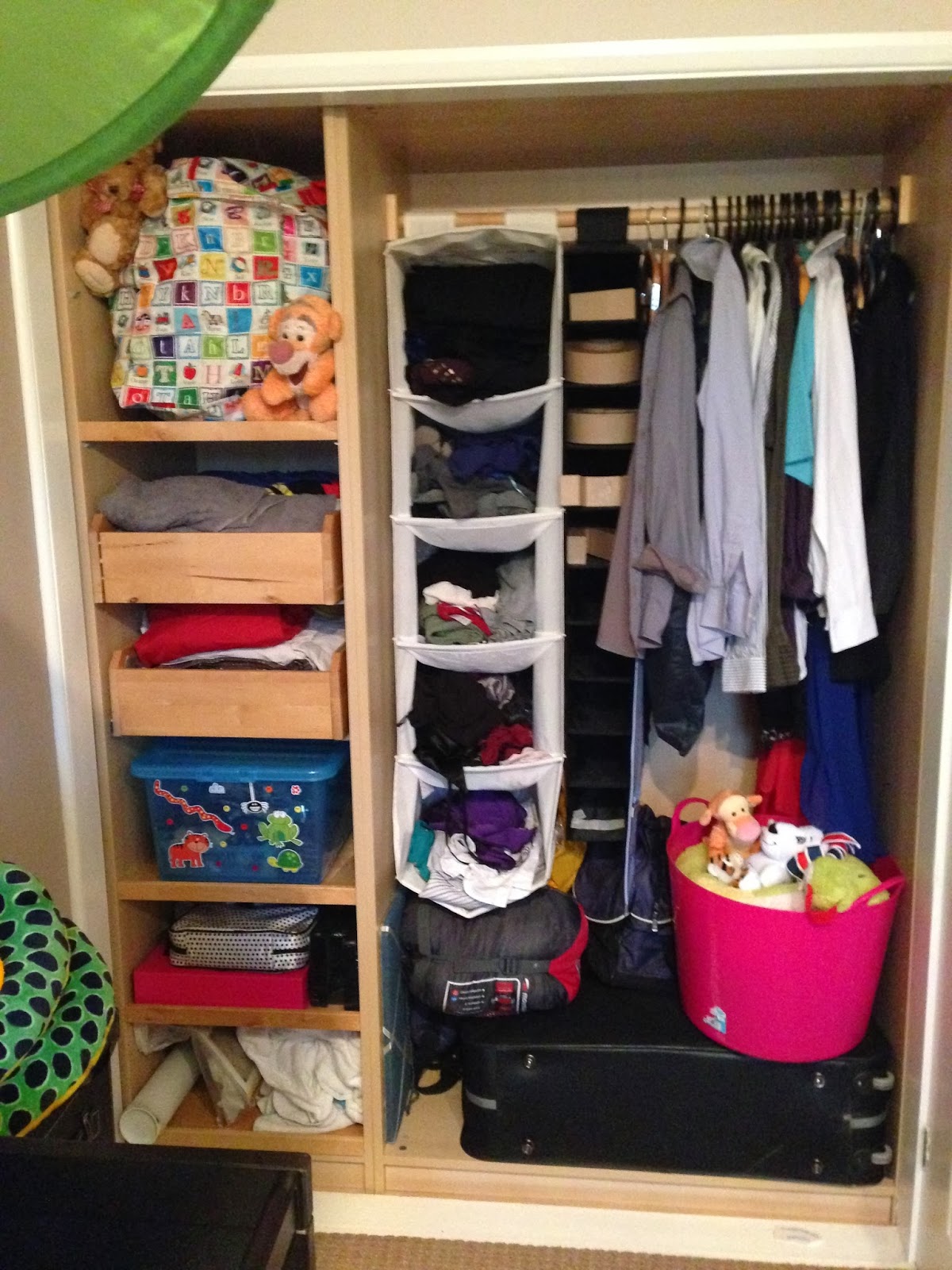 It's a built in wardrobe with no doors, so it got me thinking about solutions for when LJ is moving about. (I've read too many horror stories of babies climbing!!) So i'm thinking for another new project (like I need another!) is i'm going to get a bit of plywood that is the same width of the wardrobe and a good enough height that LJ won't be able to climb over it, but we can still grab the clothes from the rail. Then i'm going to get some blackboard paint and ta-da! LJ will have a doodle board. Kind of like this. 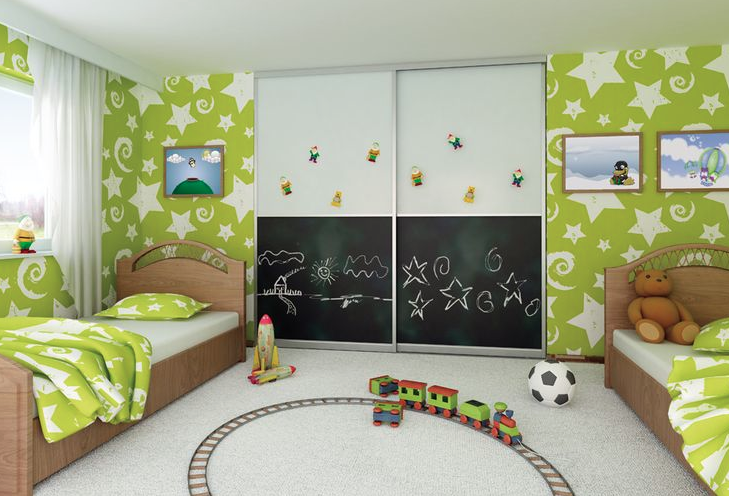 Without the perfectly tidy room of course.

Otherwise, LJ will be doing more of this... 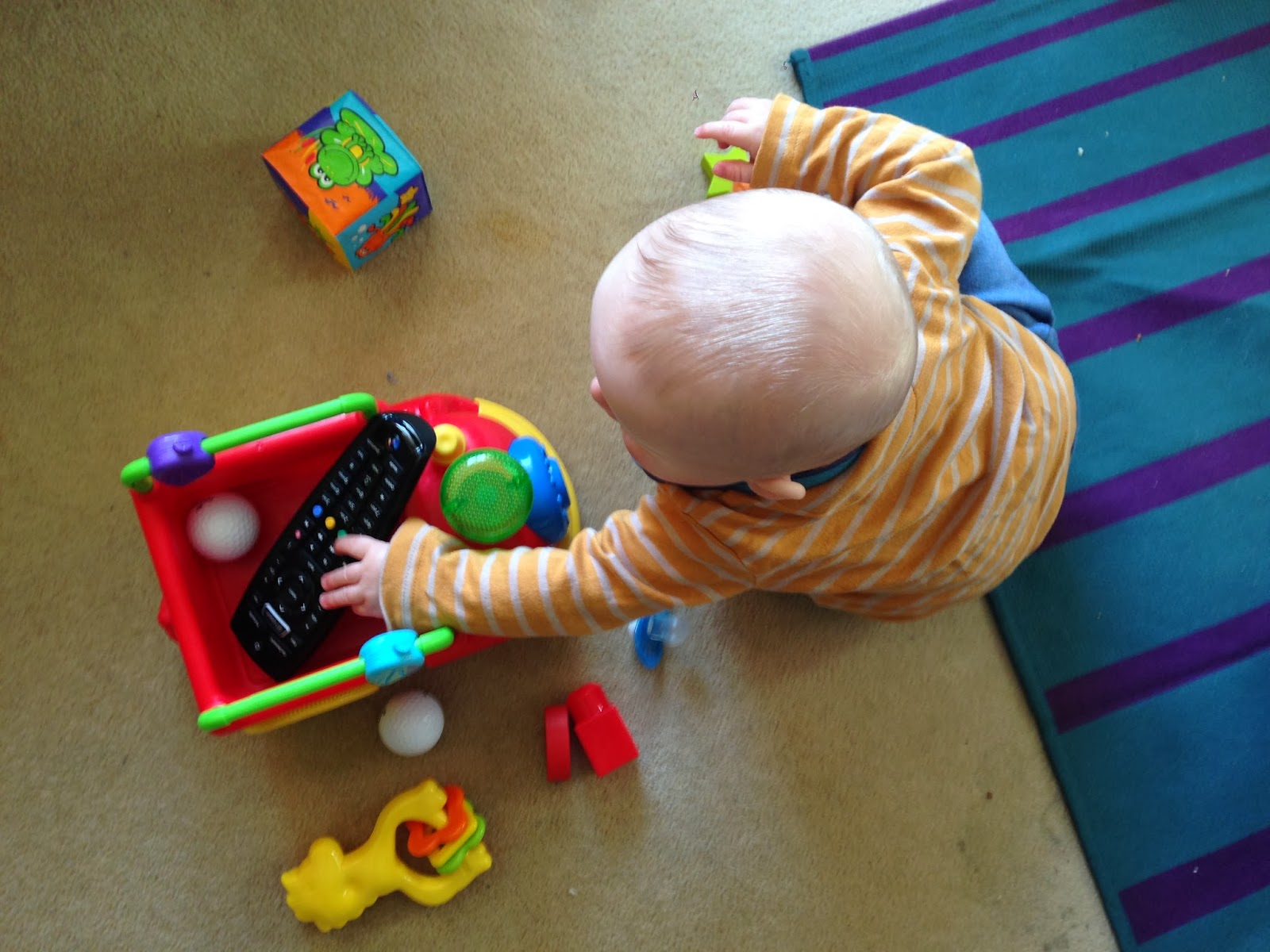 if you lose something in this house, it's properly in his train. He just loves fetching things and putting them in boxes or trains.

In between clothes organising and wardrobe juggling... I browsed a bit of guilt free Facebook time and entered a couple of competitions. 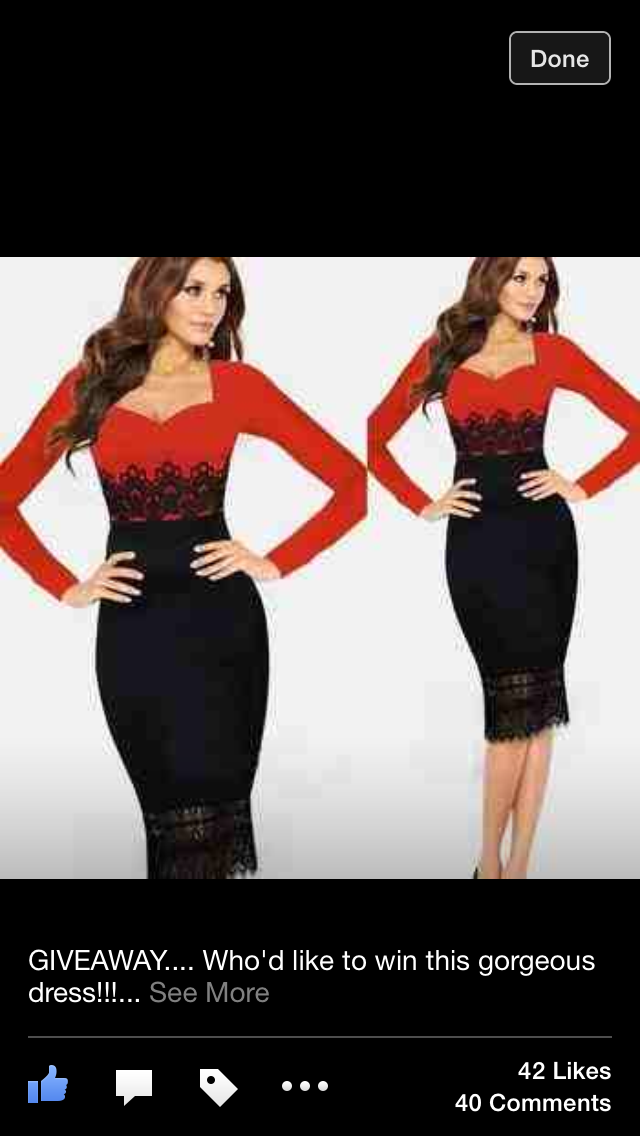 Obviously i'm not going to look this amazing in this dress that I have just won, but I'm pretty impressed the odds were in my favour out of 40 entries.

For those who get annoyed at friends on their timeline entering FB competitions and sharing the pages, well be annoyed all you like because i've won THREE things this way.

I've never been so lucky in my life.

Ali now thinks i'm some sort of lucky charm and is sending links my way of competitions to enter.

After all that excitement, I settled down to do some work for Logi Bear Prints as I had a couple of personalised birth prints to design up and some ideas to brainstorm for another custom print for a customer. Talking of Facebook competitions, why don't you go enter mine for a free birth print for yourself/mother/daughter/friend. Click here.

Here's some sneak peeks at the designs I worked on today. 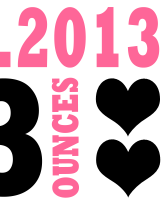 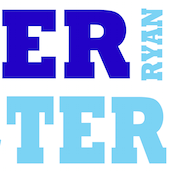 A lovely girl print for a new bedroom and a boy print for a first birthday. I can't wait to see them up in their rooms.

Before I knew it, it was time to go pick up my boy! 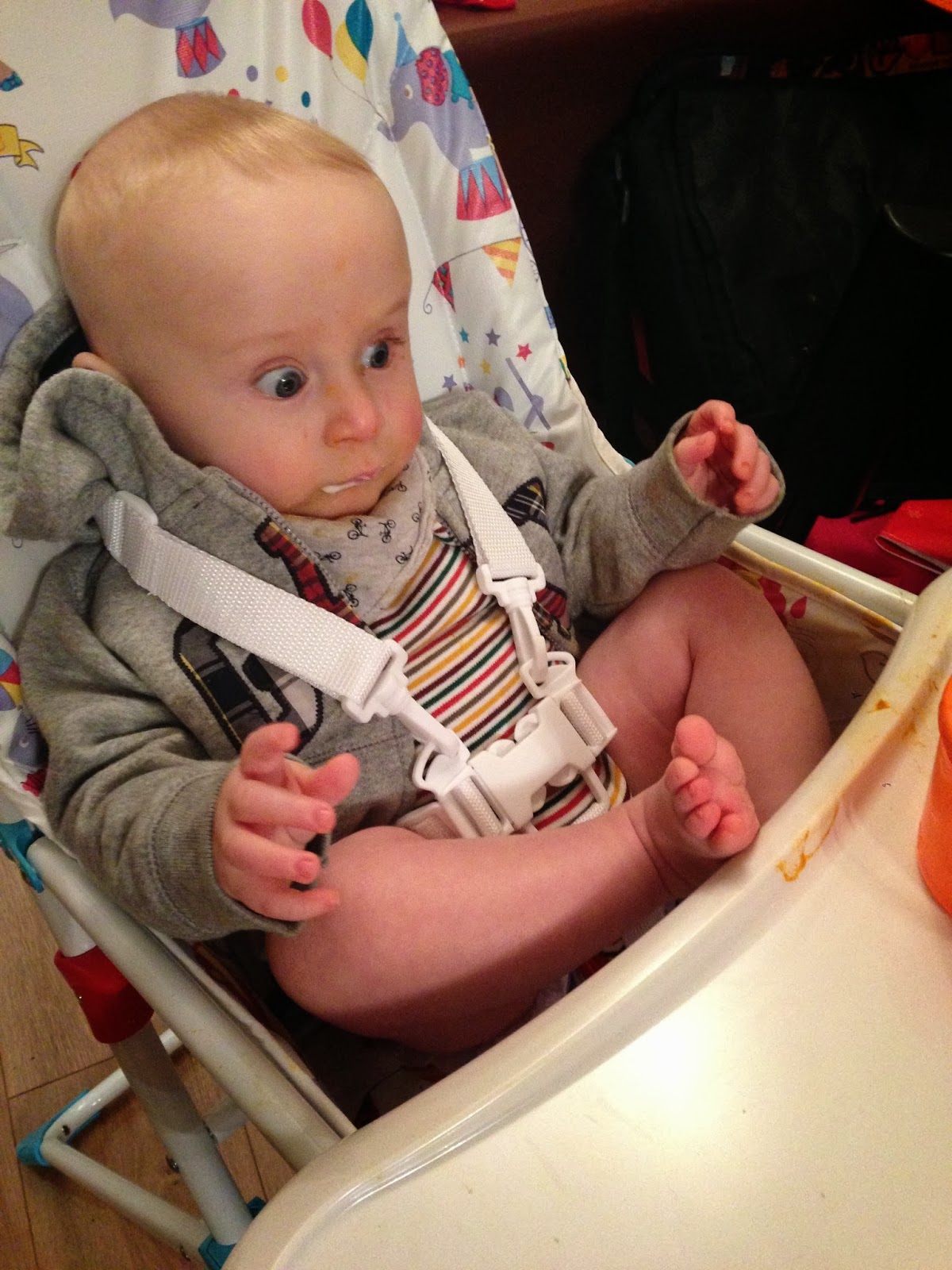 I guess he's quite at home in his new highchair at his grandparents house. Feet up and everything. We got big smiles as mummy and daddy came in the door together.

He was properly think - OH HEY YOU GUYS.

Then it was bath and bed and I realised I didn't get time to take any video of him today for his year video project. So I shot this one :) goodnight all.