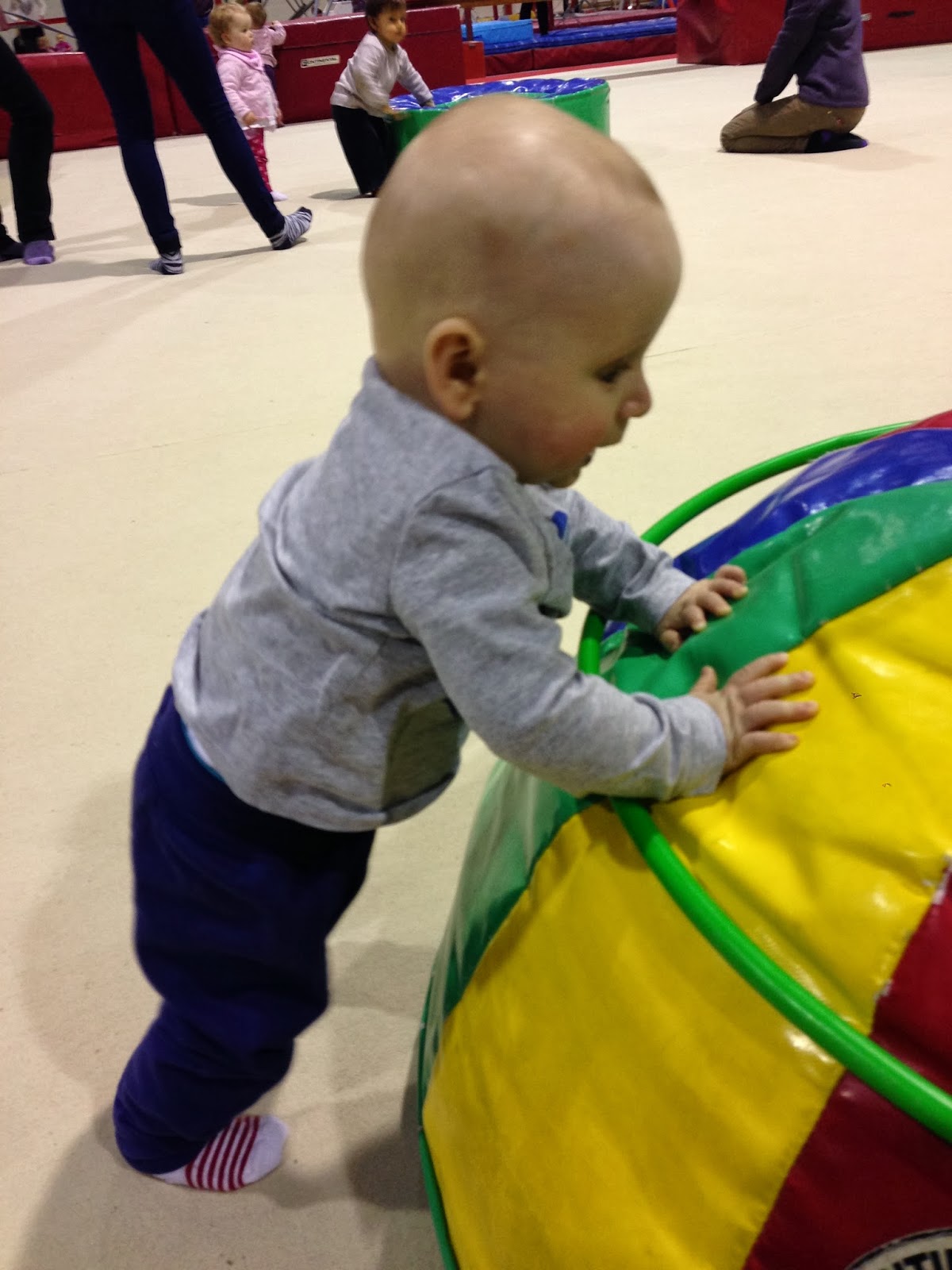 So I went along with my friend to a gymnastics freestyle play for babies and toddlers on Friday. I figured it would be good and squishy for LJ to throw himself about and see if he wants to crawl. Oh no, he just wanted to stand up and walk everywhere holding on to mummy. I swear this kid is going to skip crawling. He's just not interested. He'll bum shuffle and roll about to get places and he'll go up on his knees and go from sitting to hands but then he looks up to you and holds out his hands to stand up. Then he does a lovely little frog march walk and he's off! Places to go! People to see! 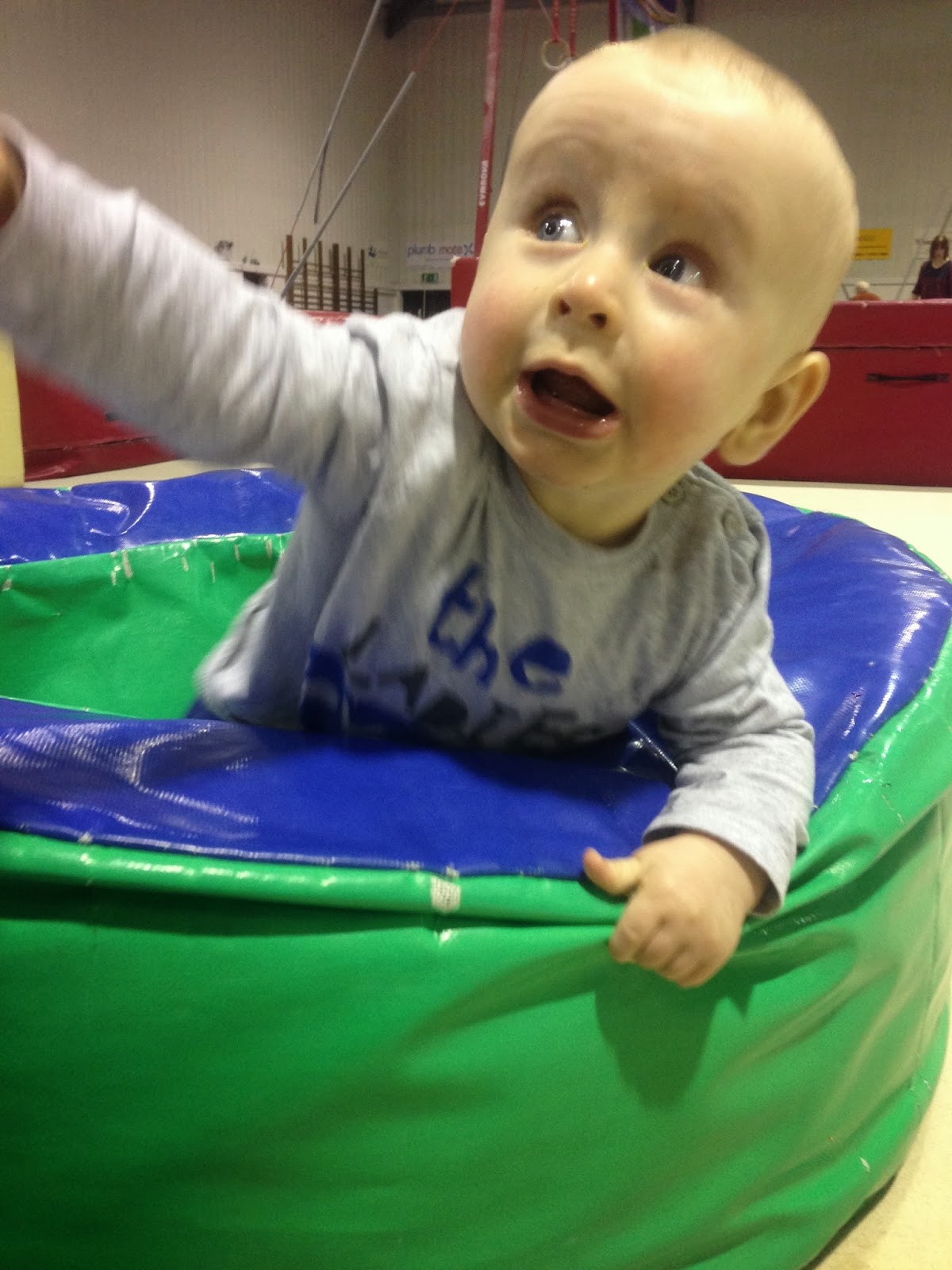 He had fun anyway. His little face when we walked in the room and their were toddlers running wild everywhere and jumping off things. He LOVES big kids! He could watch them all day (I need to get me some for the house so I can get stuff done! haha, or maybe that would make things worse. No friends, don't start offering me your toddlers, I can't manage with one 7 month old!)

So the night times are getting worse and we still have NO teeth. Well, I thought maybe I felt one but LJ decided that was enough of feeling in his mouth. Ali and I have pretty much taken turns having naps this weekend. I cannot begin to explain how nice it is to crawl into bed at 3pm and just fall asleep straight away, without listening out for the baby monitor. I HAVE MISSED NAPS. I actually couldn't wake up. I've not felt this tired since I was pregnant. I guess after nearly 8 months of sleepless nights, it takes its toll.

So at 6am on Saturday morning, LJ and I were doing this. 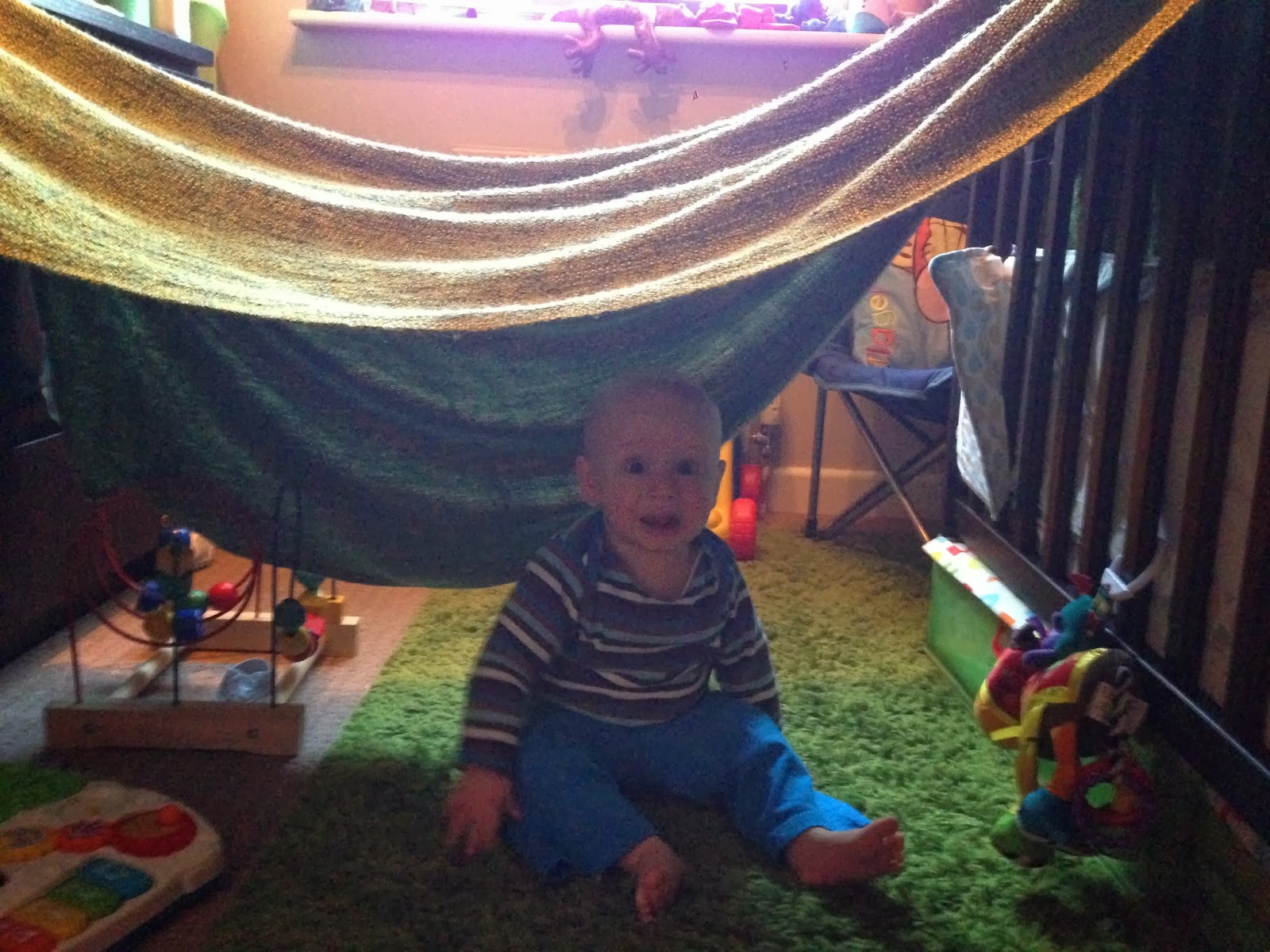 Making dens and playing 'quietly' in his room so that Daddy could have a little lie in (by lie in I mean until 8:30am) He looks HUGE in this photo?! Maybe it's the grown up two piece pjs. I was a bit of a zombie mum but I think he enjoyed the den, I think he was confused why it was the slowest game of peek-a-boo ever but never mind.

We decided to go do a food shop to take a little drive as LJ was due a nap and of course we could get more Lego mini figures!

Remember how I said i'd become totally involved in the foil packet feel up? Well I was right again! Lincoln, one we really wanted! I felt the hat and got a little excited in the aisle. 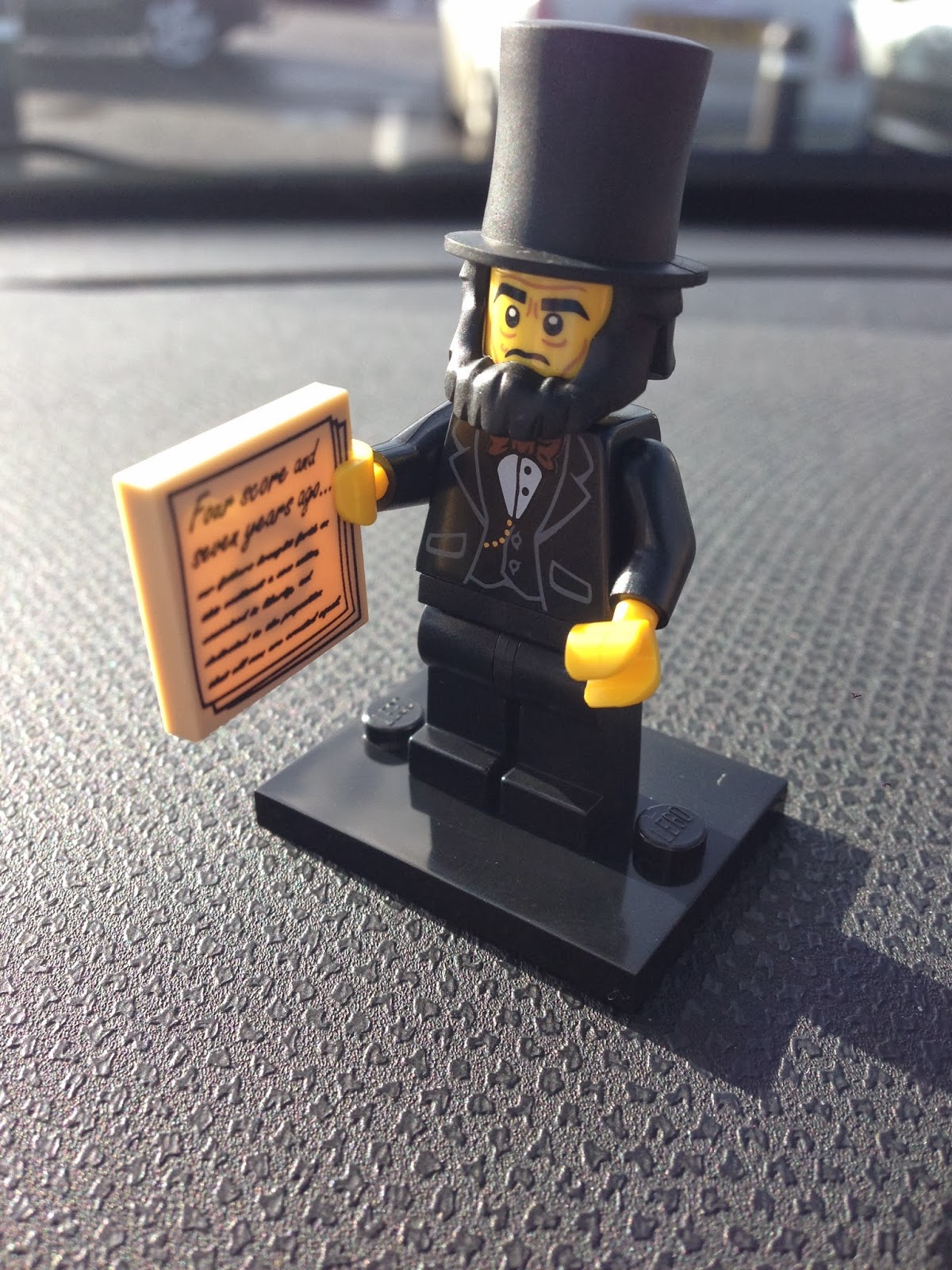 So far so good! Still excited by the new characters, we got two packets again. Oops.
We've already said only one packet from now on otherwise we'll get them all and food shop will be boring again.

Ali got the main character. EVERYTHING IS AWESOME. 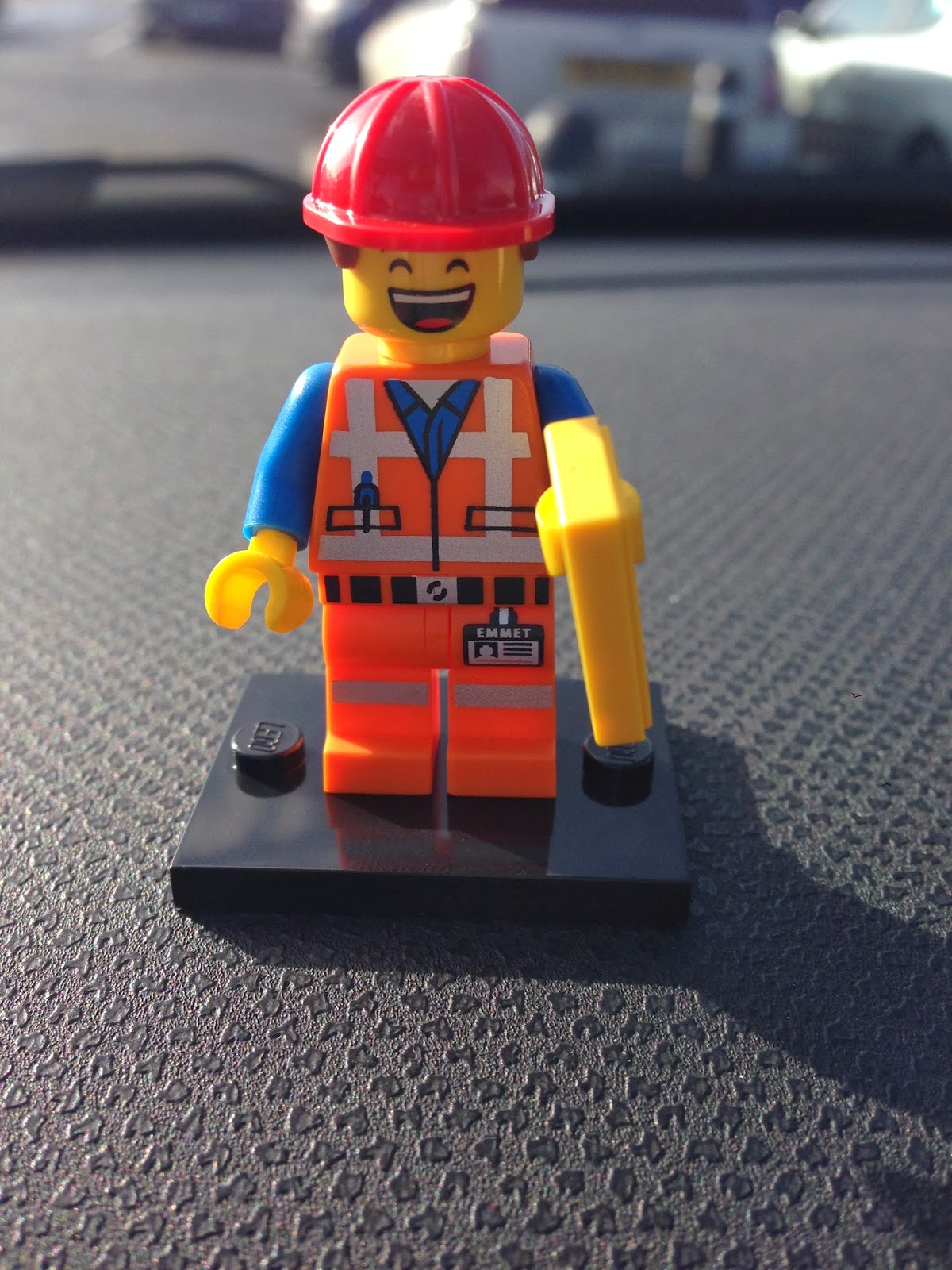 For those who aren't familiar with the LEGO movie, the trailer looks great! I've made Ali promise not to go to the cinema and see it without me.

I'd had a cinema card since I was 15. I decided when I was pregnant that I would cancel it the month I was due with LJ. I really miss seeing new films. We used to go see everything because we'd already paid for the cards and therefore it was a 'free' activity. I've only seen one film since June 2013 at the cinema and that was Wolverine for my birthday. So I'm kinda excited. (not so much to pay £10+ for a cinema ticket). 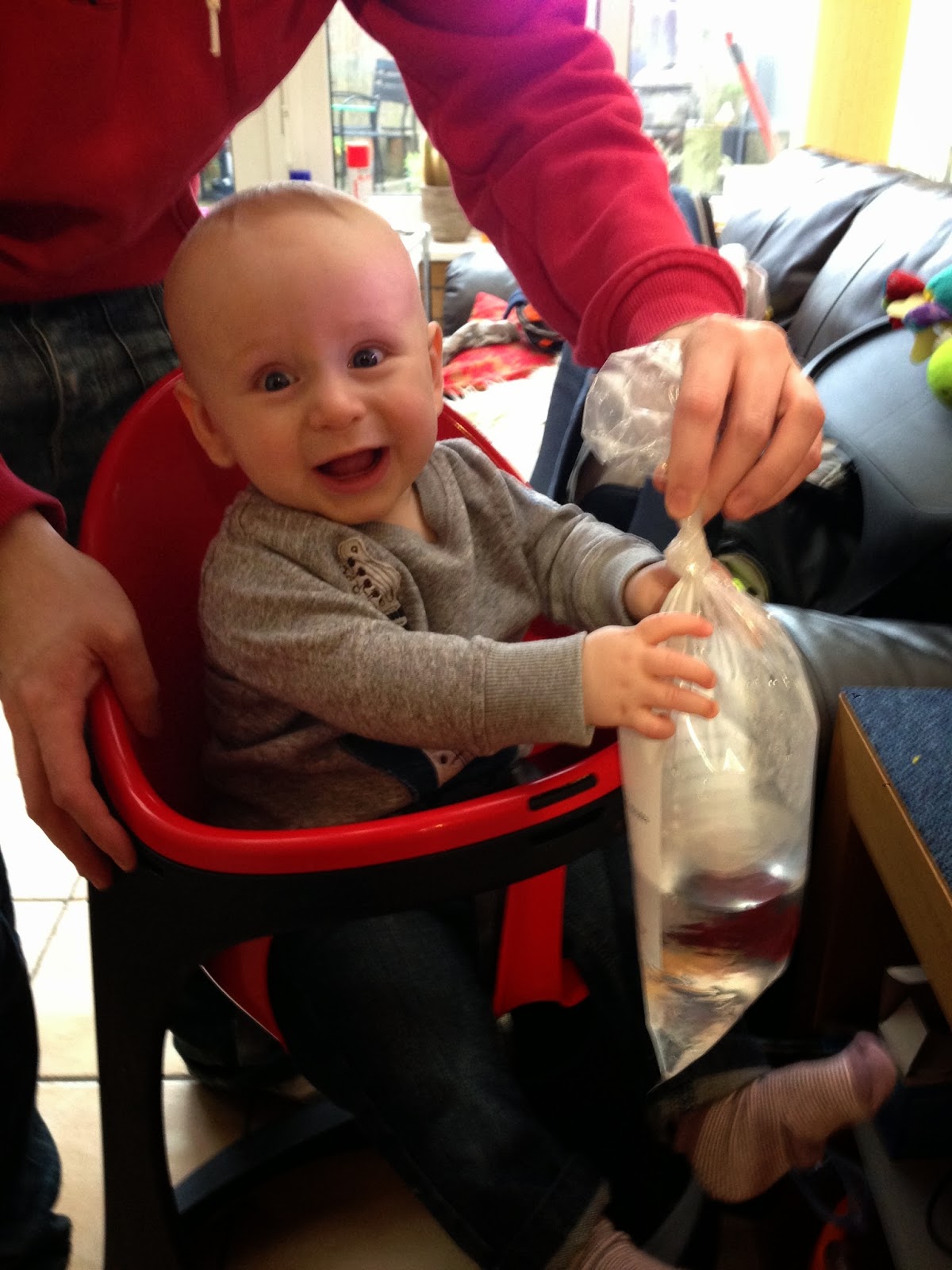 We also got a new fish! Since my dad got his tank about two months ago, i've wanted to get a fighter fish for it. We had a tank in our first year at uni and we had a red one called Wellington and he just looked great in the tank. So I found a red one and we finally could add him to the tank now that it was all 'suitable conditions' for him. LJ was VERY excited at the pet shop. He stares at all the animals, big and small. We stood him up by the rabbits and he was bobbing up and down excited. 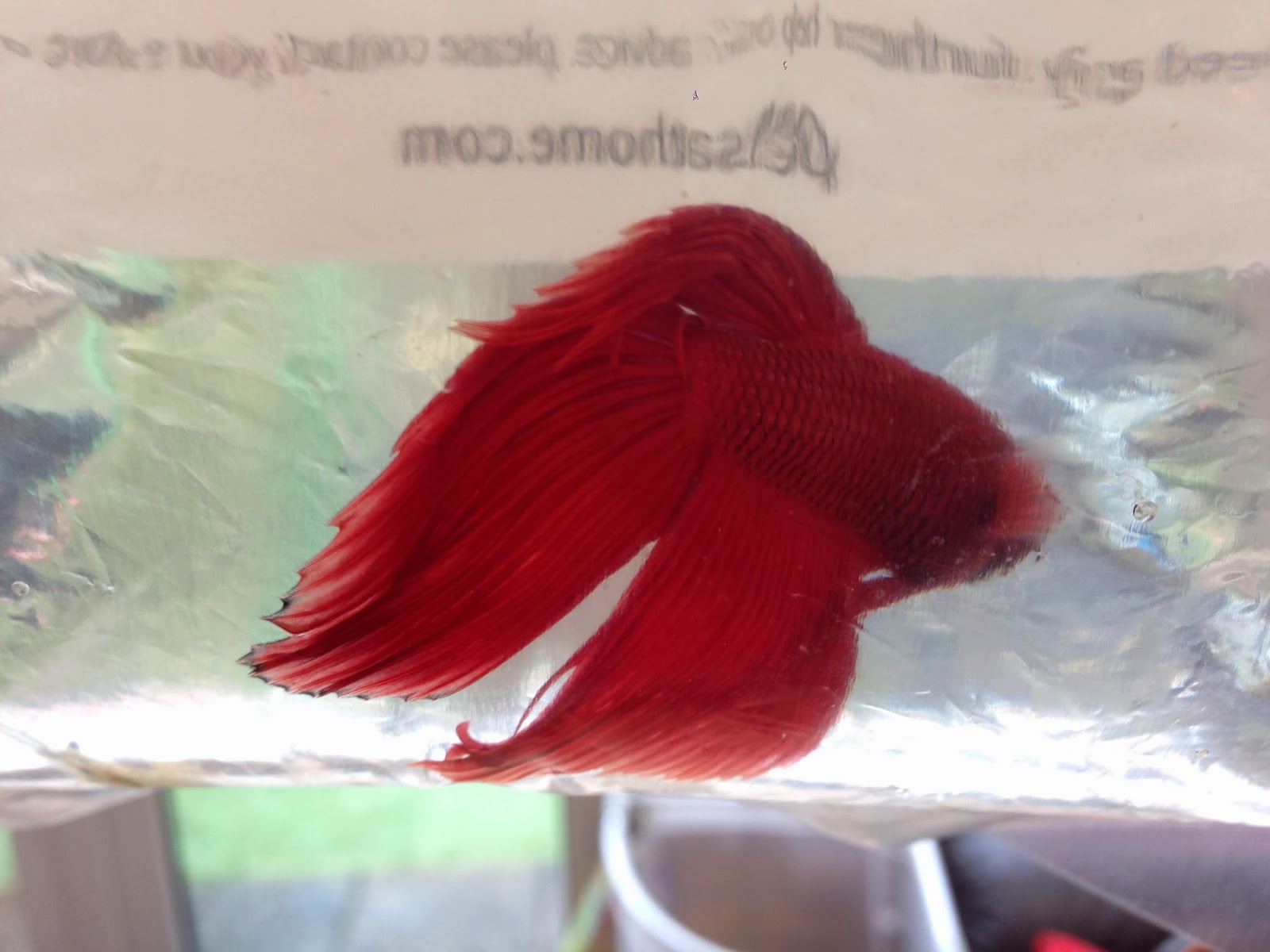 Meet 'Muno' named after LJ's latest love of the show 'Yo Gabba Gabba' that I randomly put on, on Netflix one day and was a big hit.

If you haven't seen Yo Gabba Gabba before, it will blow your mind. I'm pretty sure a group of friends got together, got high and said lets do all these things in one show. It's amazing stuff though. The songs are brilliant and hilarious at the same time and LJ smiles all the way through it.

So Muno the fish is a little bit of a bully. We were warned he might try and fight with other neon fish, but we weren't too worried as we don't have many, but this guy seems to want to square up to EVERY fish in the tank. He doesn't actually hurt them, just seems to go around being a bully. We are keeping a close eye and the other fish seem to have banded together to stand up back to him. 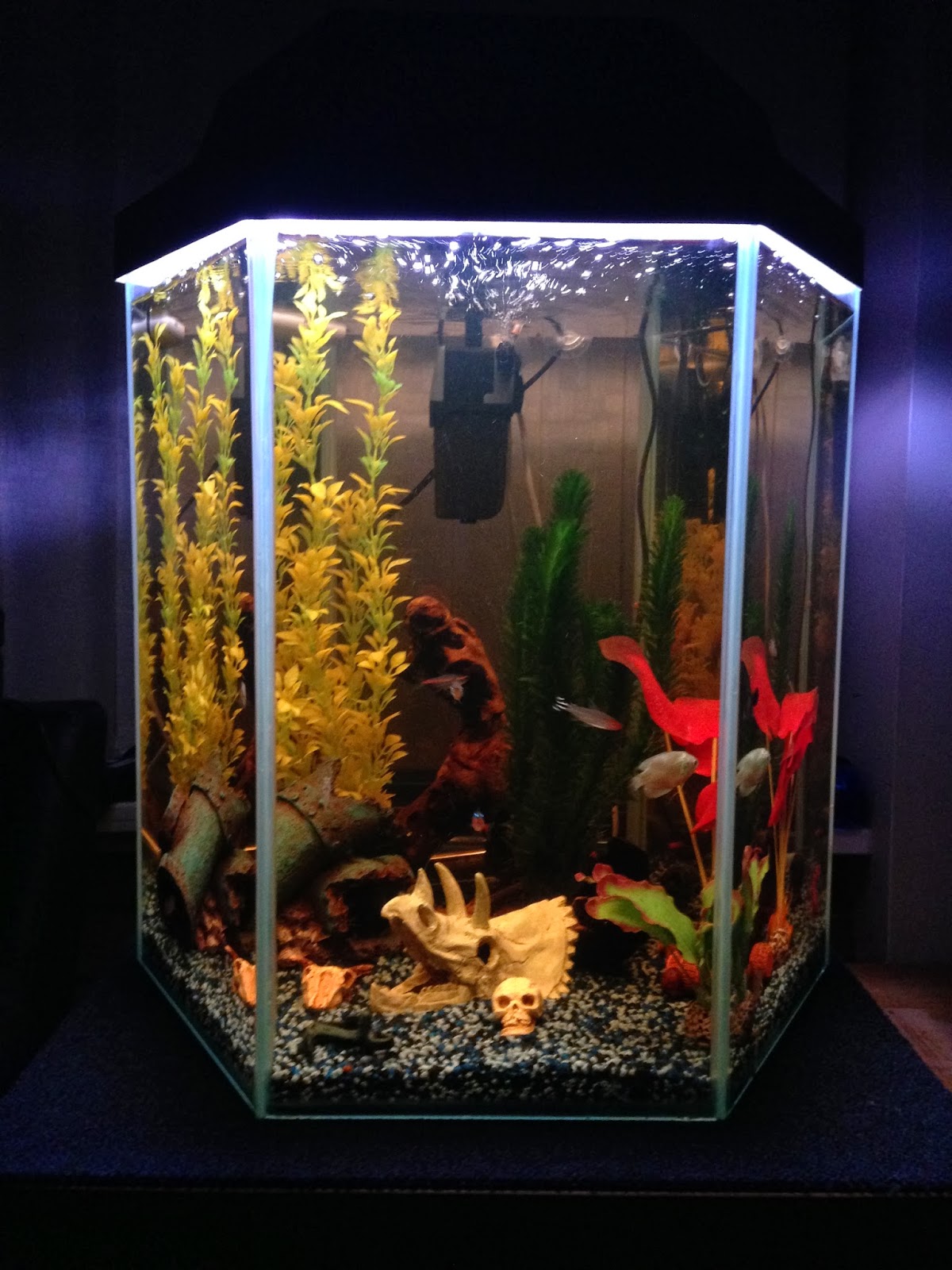 We all love to sit and watch the fish sometimes. Watch them and also search for them all to check they are all still alive and well. The shark fish LOVES to hide and scare us. 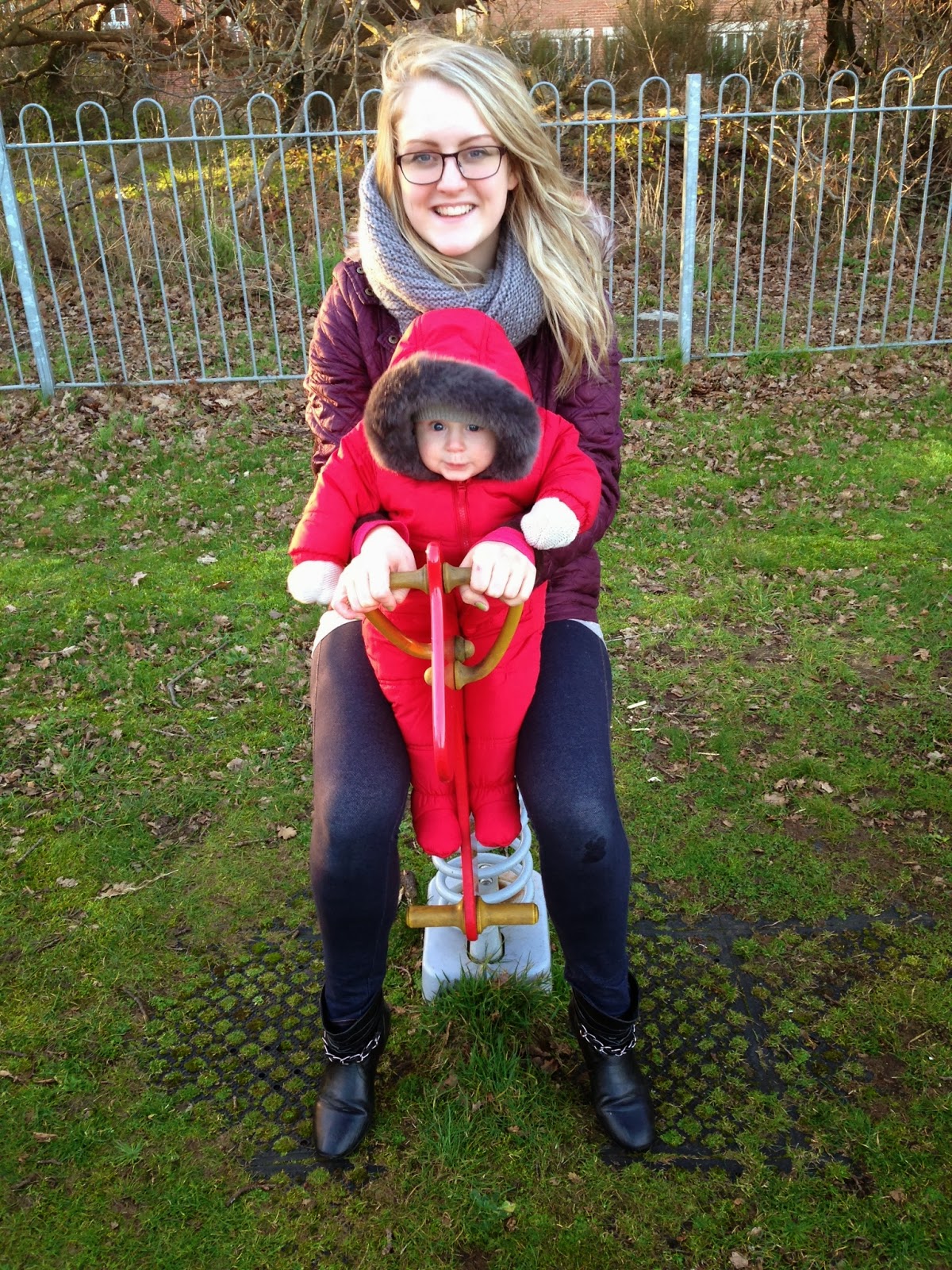 In the afternoon we went for a little walk to the little park near our house. LJ looked like a 3 month old in the swing in his snow suit! He goes immobile when I put mittens on him, like he hasn't got arms to use. So he just slummed down in the swing and looked like a little tiny baby! It was super windy though and felt very cold, so we didn't stay long. Just had a little turn on the swings, slide and rocking horse. Then daddy carried LJ on his shoulders and chased mummy home. Apparently this is hilarious to LJ! 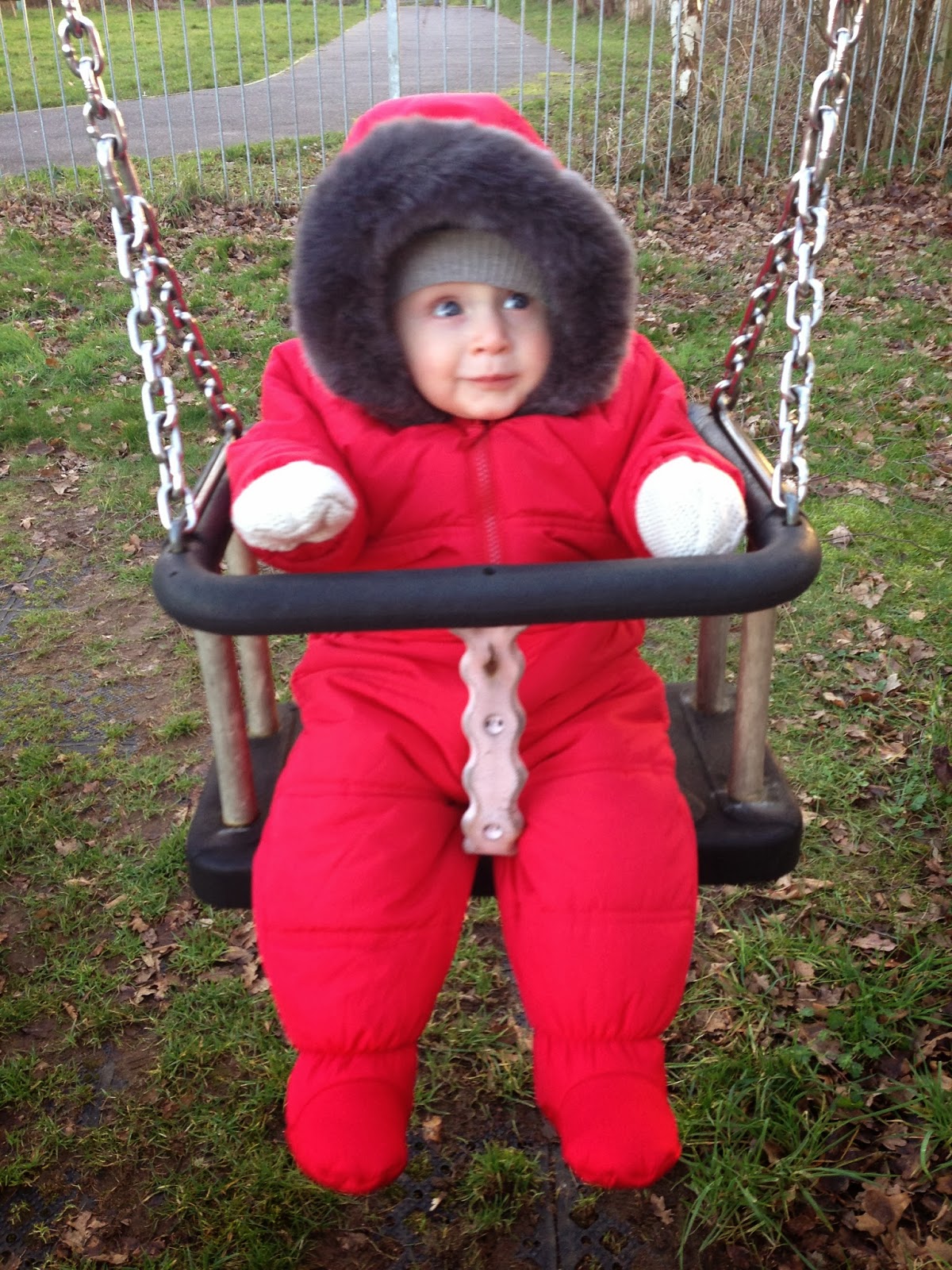 Saturday night wasn't much better for us. In the end, I told Ali to go sleep downstairs and I took LJ to bed with me. He was asleep in 15 minutes after feeding laying down. We had been up with him for 3 hours! You wouldn't believe it in the morning... 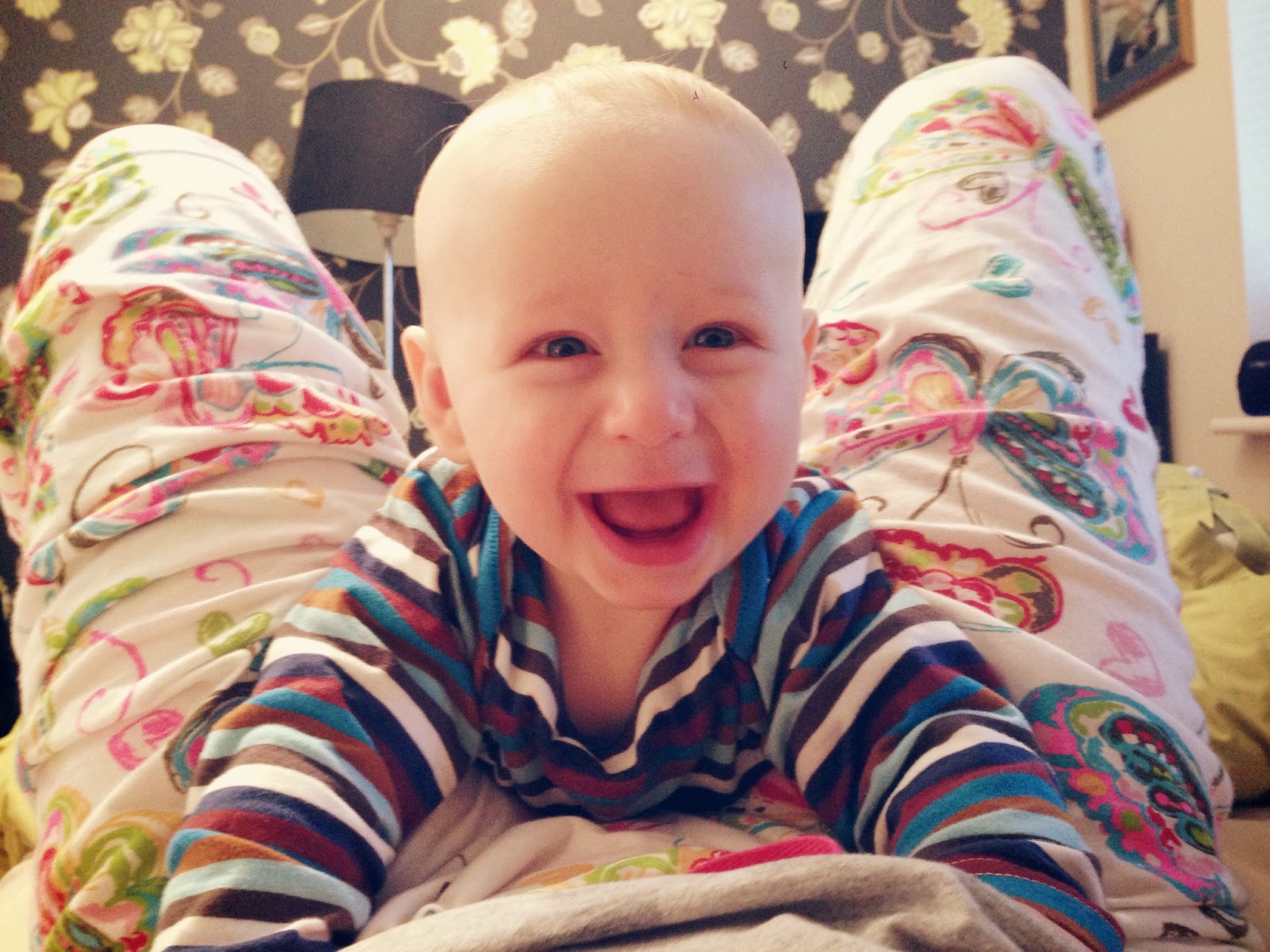 My #sundaymorningmadness photo for this morning was a very happy boy! He was obviously happy to have kicked daddy out and cuddled with mummy and woke her up nice and early to play! 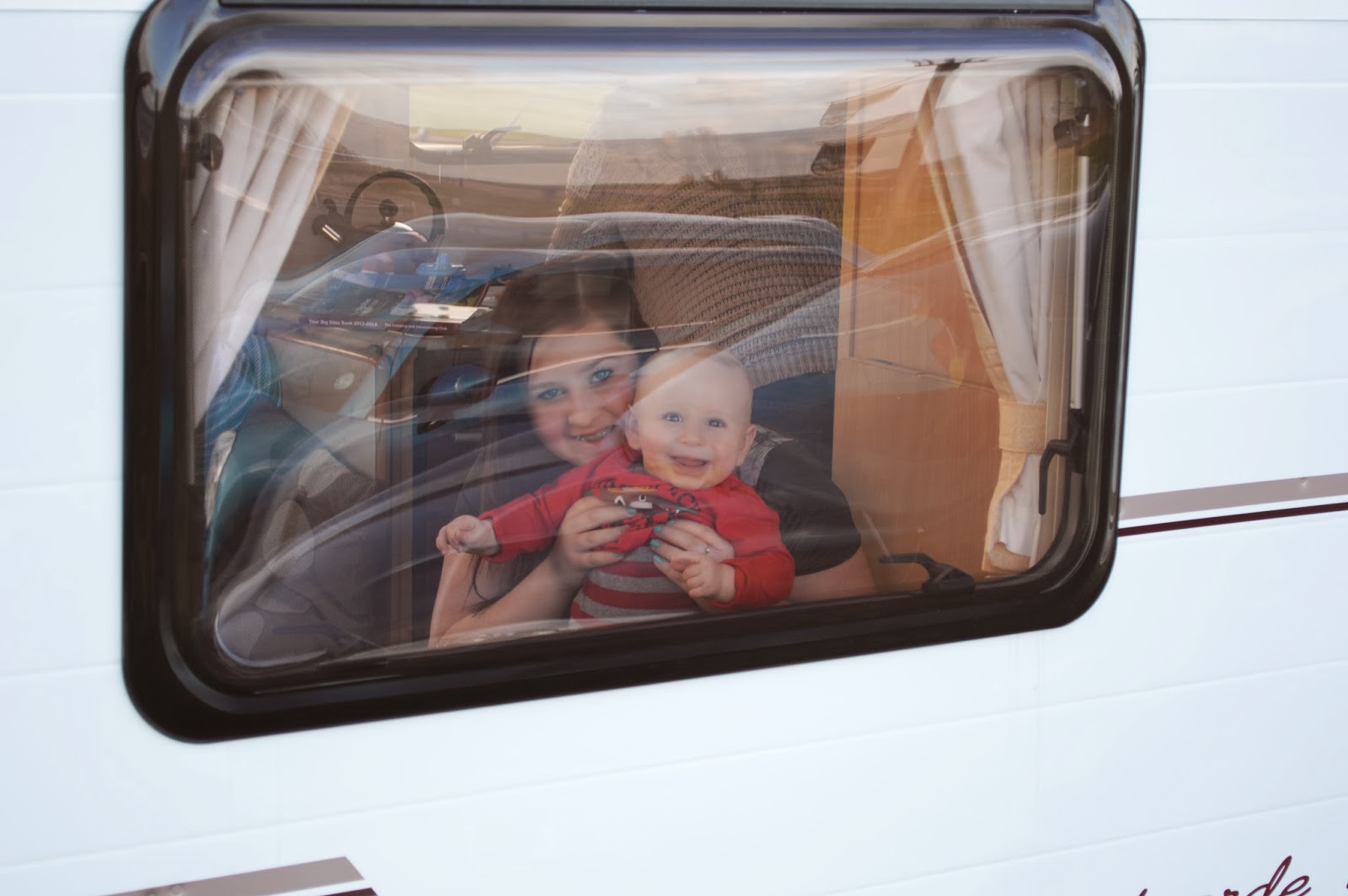 We spent the afternoon at Felixstowe visiting my mums new camper van for a cup of tea! (And we got sausage and chips, we were at the seaside after all). LJ loved it! He was standing up and looking out the windows and especially funny when mummy was outside in the wind taking photos!

It was maybe the choppiest i've ever seen the sea and the wind was strong! We are lucky not to be hit with the worst of the storms this weekend, but at least the sun was out! 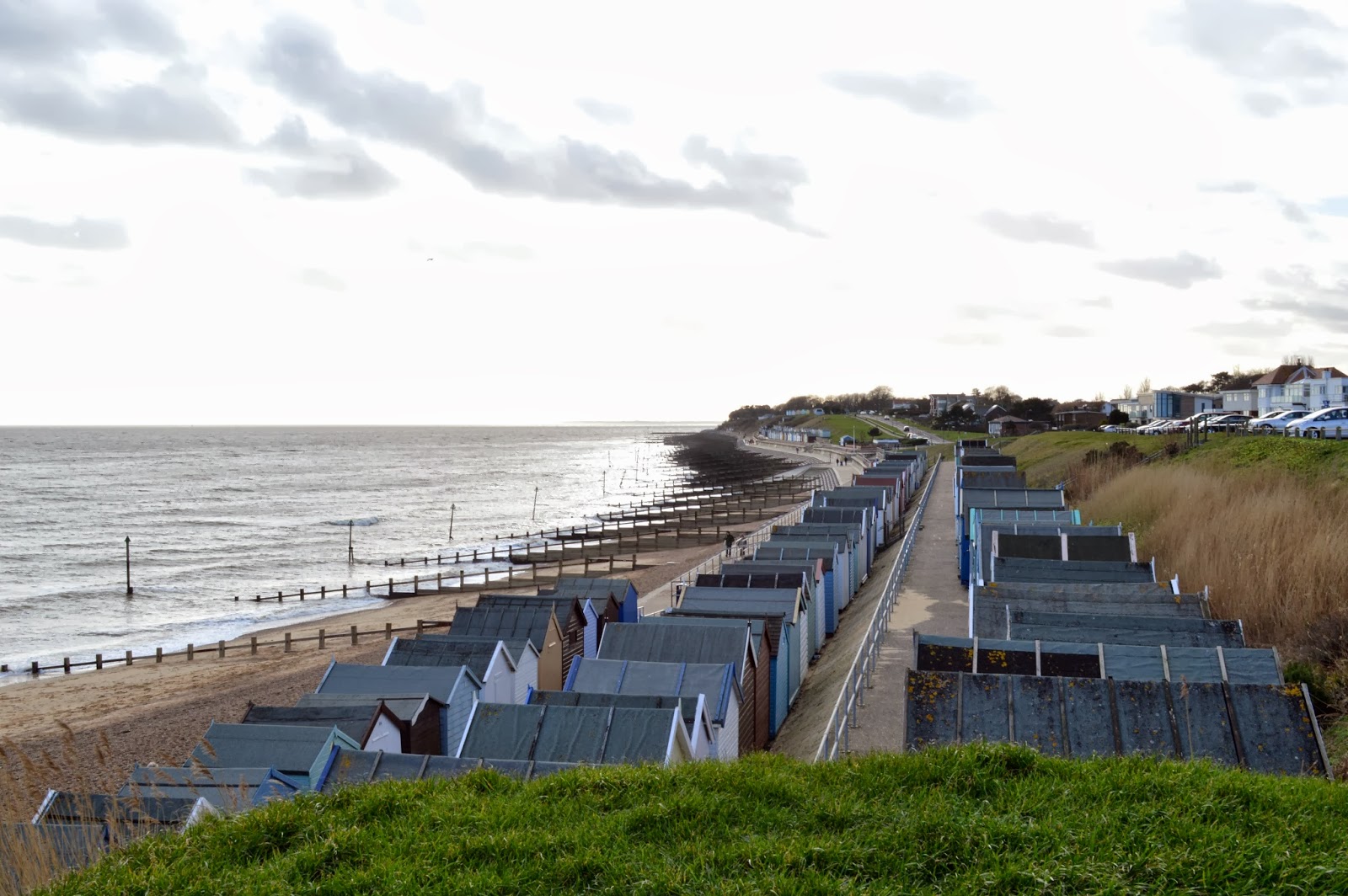 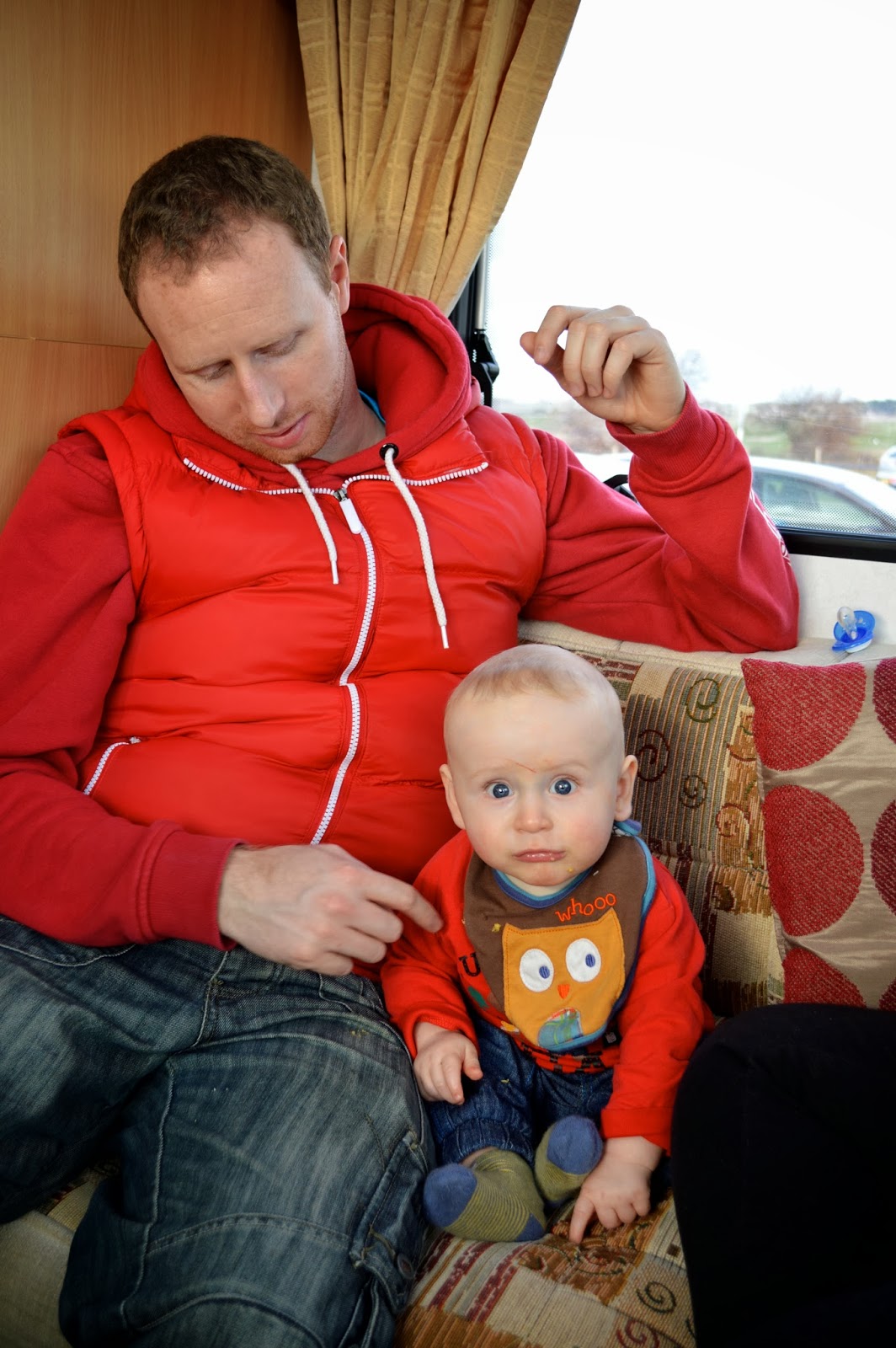 LJ enjoying a snack in the van!

The instagram photo of the day theme today was details. I thought about it all day long and then when we got back from Felixstowe and LJ was snoozing in his carseat, I suddenly thought his little hands and feet are getting so chubby now and I love to look at how little they are but bigger, all at the same time. These details are ones I don't want to forget. 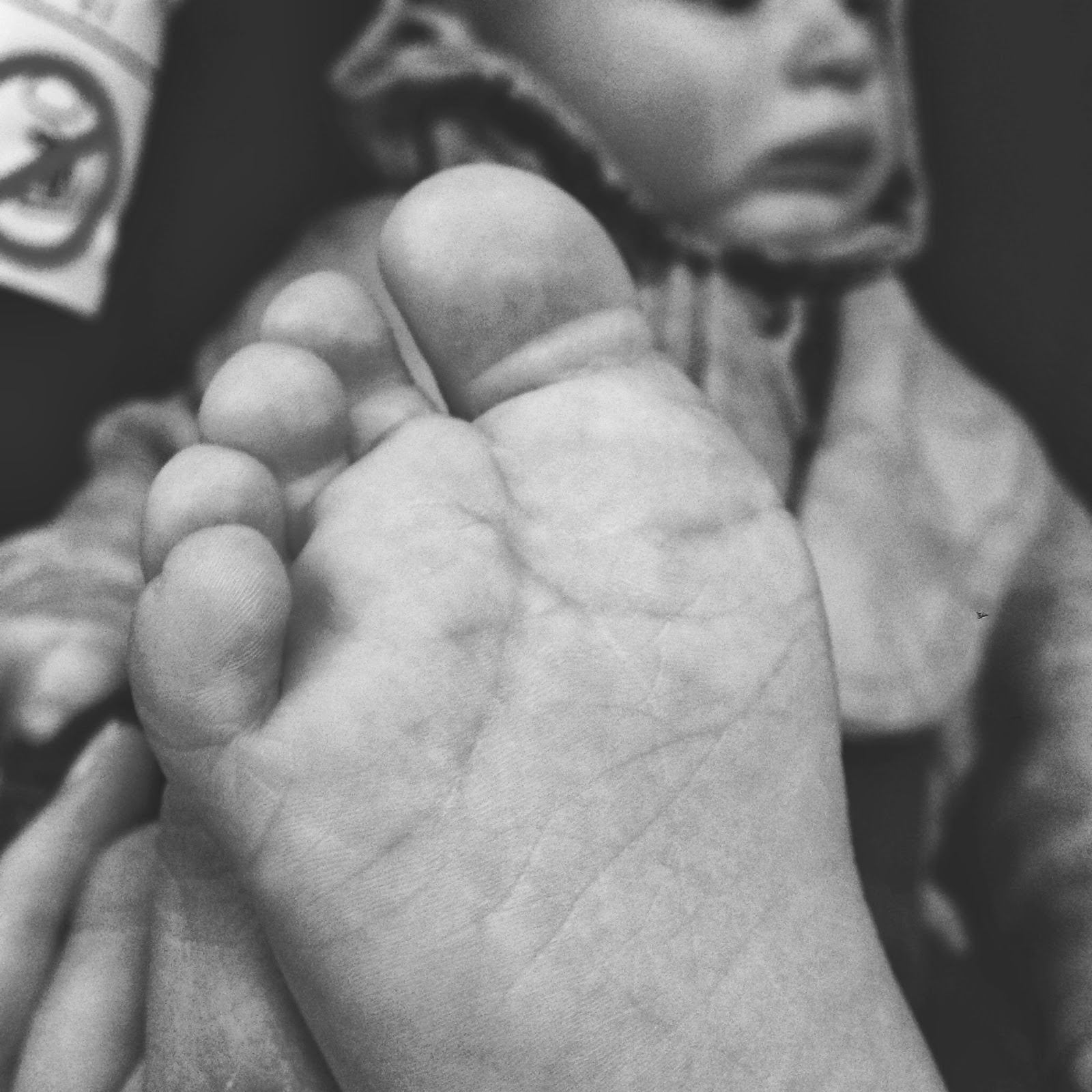 Those little piggies and the creases in his skin. How much has changed in 8 months. I took a similar photo when he was just a few days old and still had wrinkled newborn feet and his skin was all peeling off. 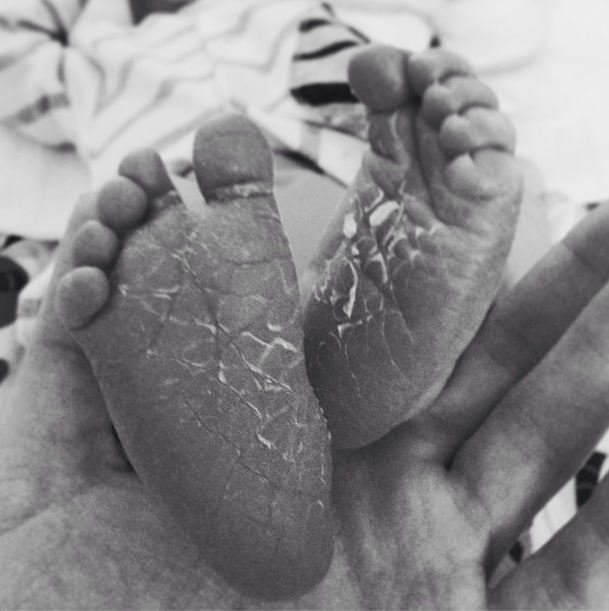 They are so little!! I'm not sure I even remember and that's why I take so many photos. You think you always will but so many new memories take place and you can't visualise them all.

He soon woke up after having his feet touched and with some lovely bed hair to show for it! (Yes, that's right. At nearly 8 months he finally has enough hair to have bed hair problems). Dinner was a fun pasta, cucumber, pear and cheese help yourself session and he looked so funny with his sticky up hair, rambling to himself and getting food everywhere. 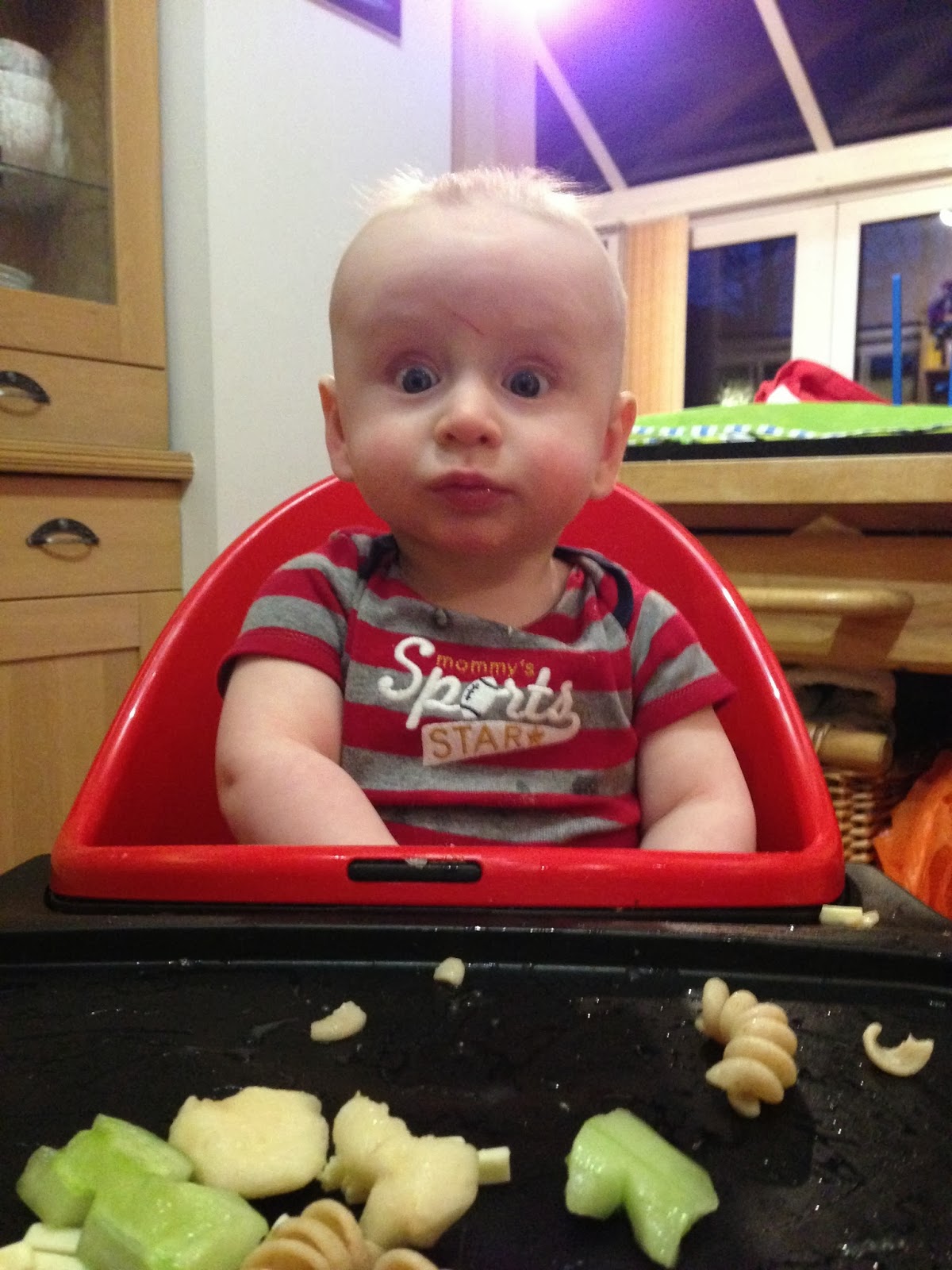 A little project update. I didn't get much done at all this weekend. I always have good intentions and then things like sleep take priority. I did a couple of pages of LJ's week by week book and that was about it. 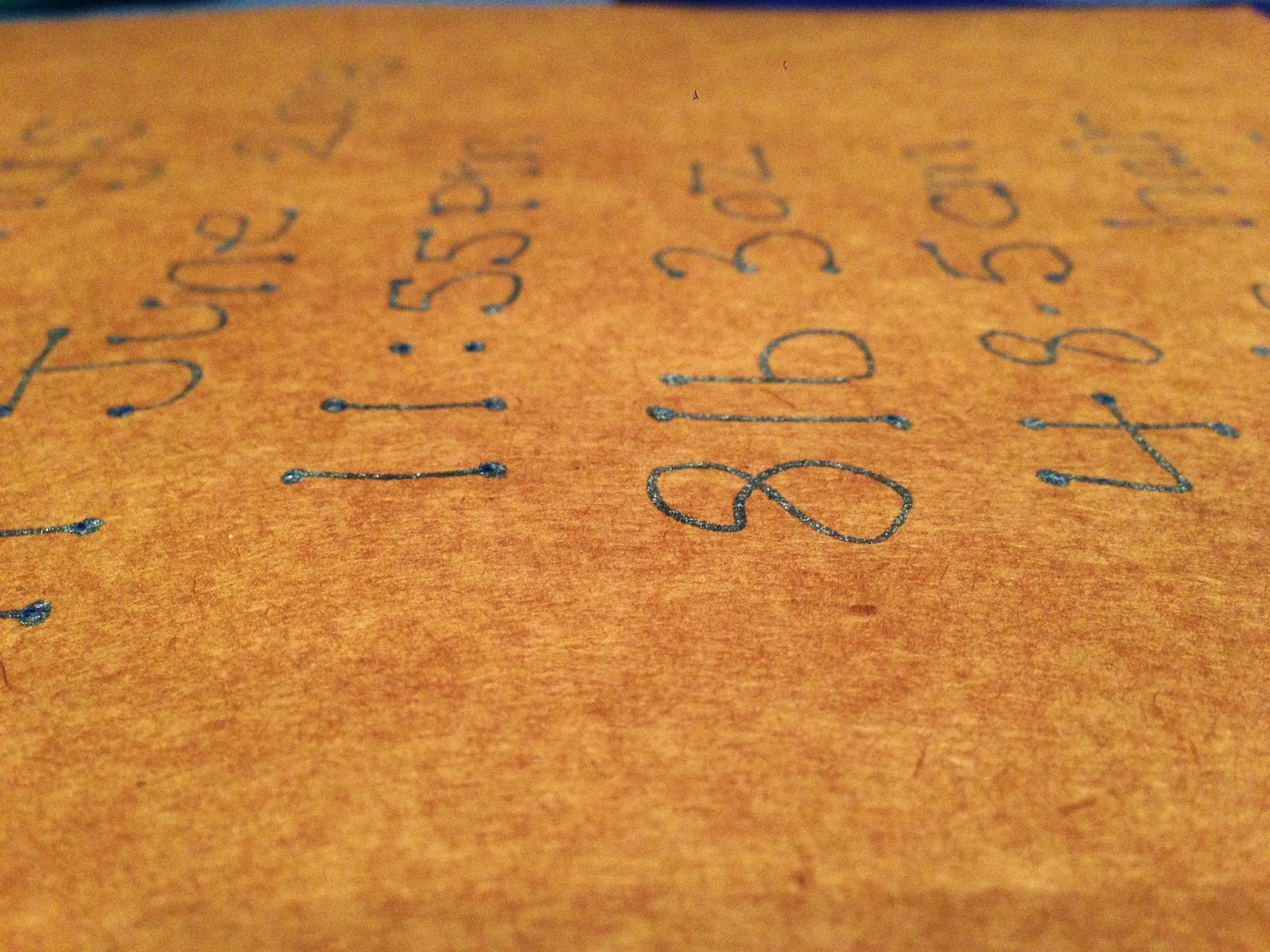 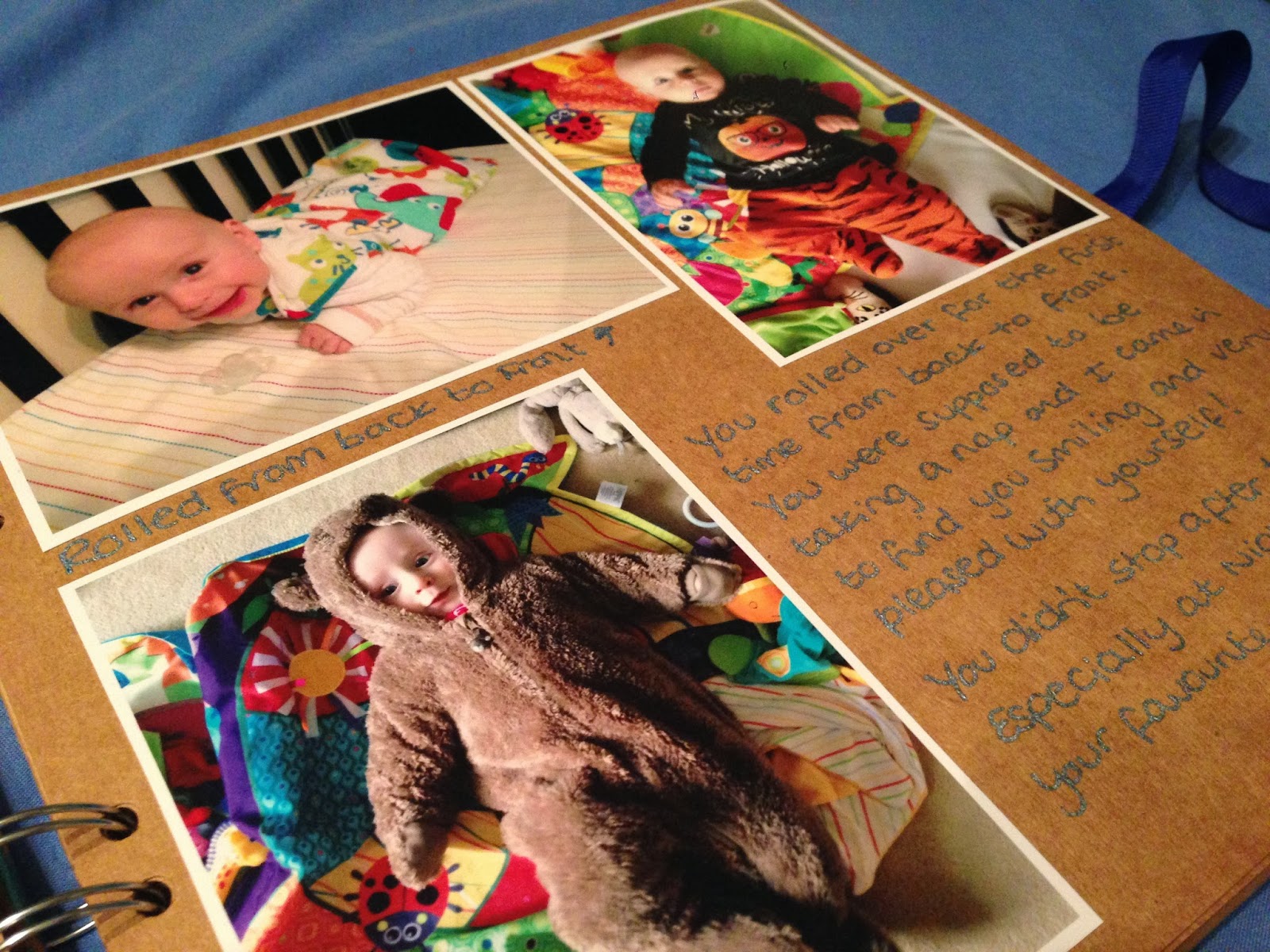 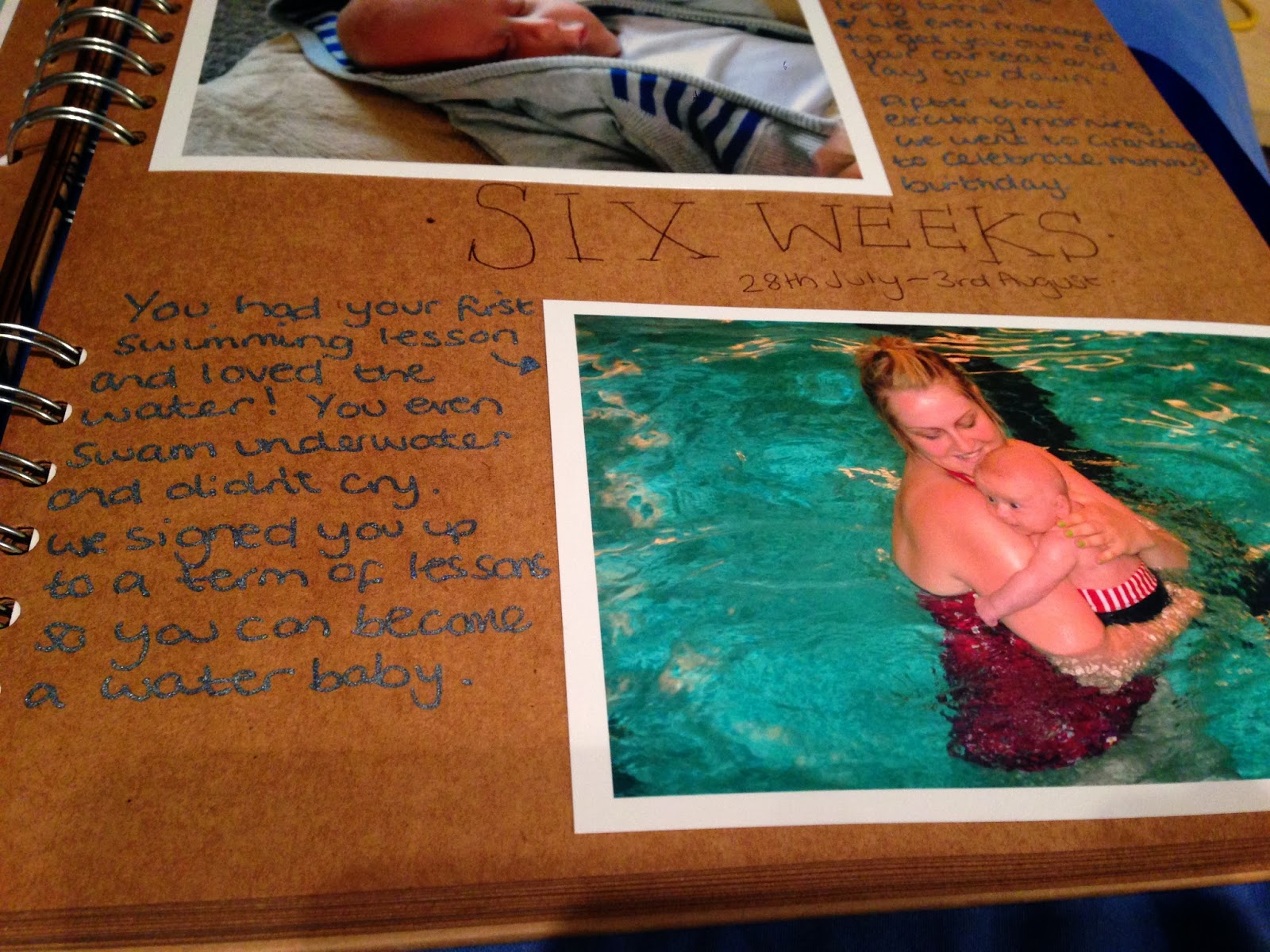 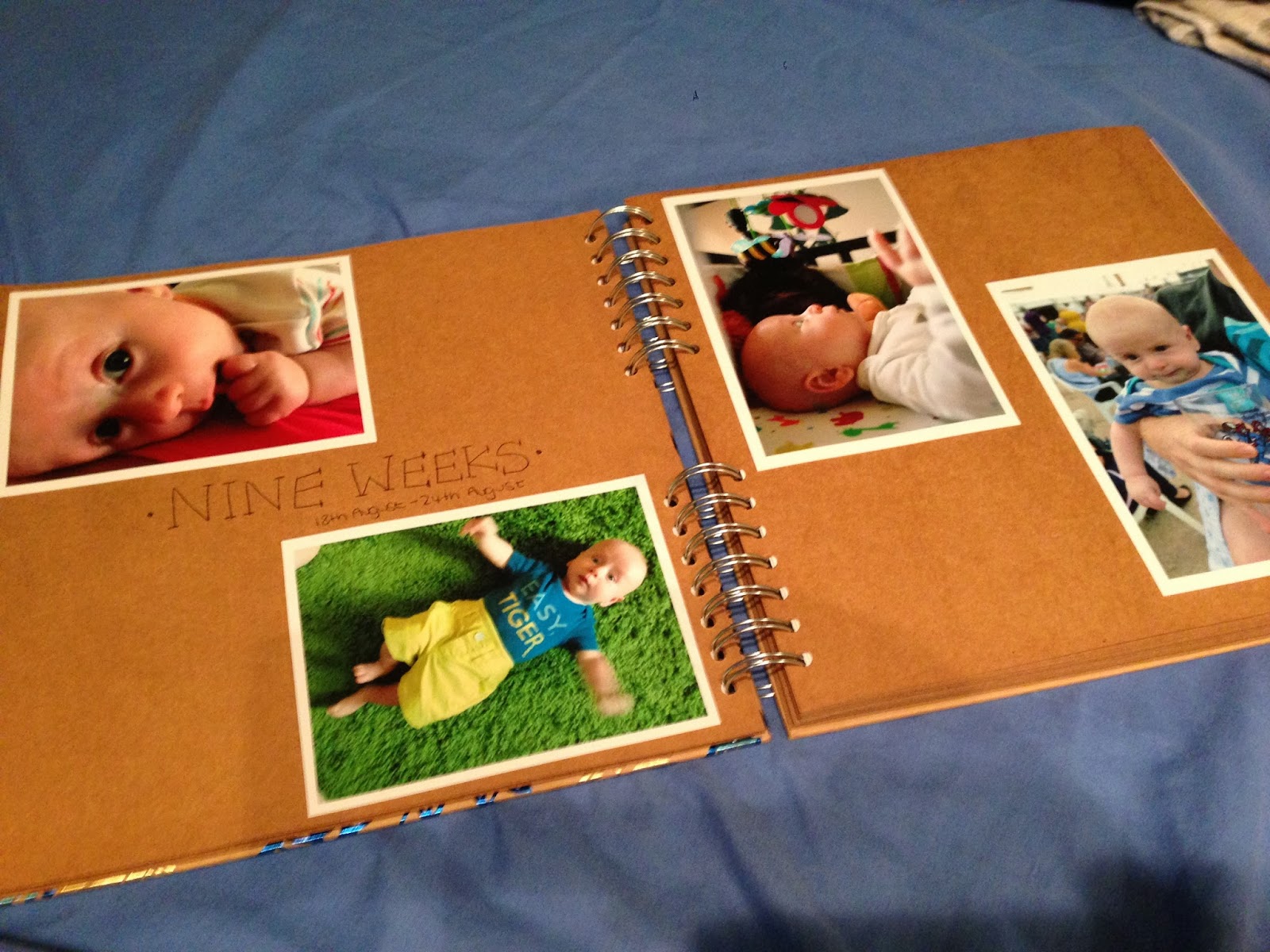 I love looking back at all his little pictures. I have a lot still to fill in and the next batch of photos to organise and print!

That pretty much sums up my weekend. Action packed on little sleep. We have a nursery day 2 hour trial tomorrow. I'm trying to keep myself together! Lack of sleep plus emotional mummy may equal tears when I think that I only have 3 more weeks of being a full time mummy.

So I leave you with this delight. His new 'excited' face. Like a silent laugher. He cracks us up.