I think i'm expecting too much...

from life?
from motherhood?
from myself?

Turns out when you have a 5 year old Macbook Pro and a Brand new 24 mp DSLR camera and 1GB film clips and you try and upload, download, open, sync, blog, browse, game and copy at the same time... somethings going to give.

Looks like I got used to having a super fast mac and having 10 things open at once and switching between all and somewhere in the last few months, it's just kind of given up on me.

Or I started to upload HUGE photo and video clips and a million iPhone photos and videos.

Anyway, a huge fear of mine is losing my data.

I'm really good at backing stuff up on multiple platforms and various hard drives and I have a whole time machine back-up of my mac as well as loads of CD's of my old photos etc.

I even hide some of the hard drives so that if I ever got robbed that they may not find them and i'd have something saved.

I also upload to that wonderful place called the internet. Some may think, god, she uploads loads of photos of her kid. Facebook is one of the best back-ups there is! It's free! They haven't set a limit (i'm on 25k+ photo uploads) and as long as I don't forget my password, we are good to go!

I also started uploading videos of LJ to youtube, another safe keeping. (Can you see I have a big fear problem yet?!) 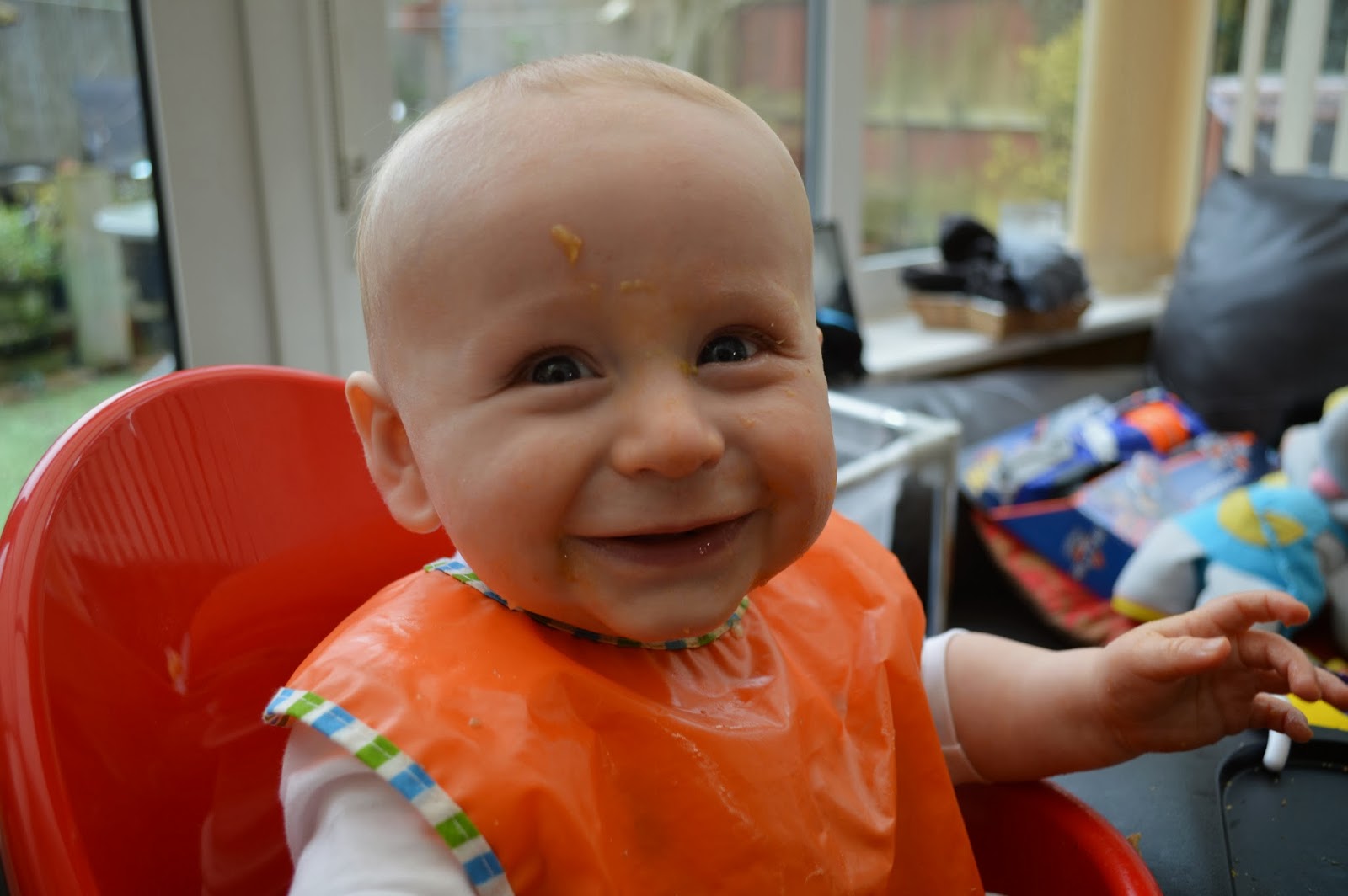 Who would want to risk losing pictures like this?!

Well tonight my iPhoto decided it was going to make pictures disappear, oh but keep the albums, just to show me I have no photos in them.

I never trust anything and with my new lovely 32GB memory card in my camera, I haven't deleted photos off there for a few weeks and so I could upload them all again.

Lots of huffing and puffing from me because I feel this always happens to me.

I even bought extra iCloud Storage and I still don't have enough storage.

Having previously worked for an Apple Premium Reseller, I had been gifted extra iCloud Storage (or MobileMe for the original Apple Fans) for the last couple of years. I had 25GB free storage plus the original 5GB you get. This is apparently the amount of storage I need.

So when that ran out in September last year, I thought I could purchase 10GB of extra storage and make do with 15GB iCloud Storage. Nope.

So while I was up all hours of the night with a teething baby, I decided to go through my Camera Roll and delete some unnecessary photos. Turns out i'm not great at this and spent more time looking through cute newborn photos of LJ that I had forgotten I took. 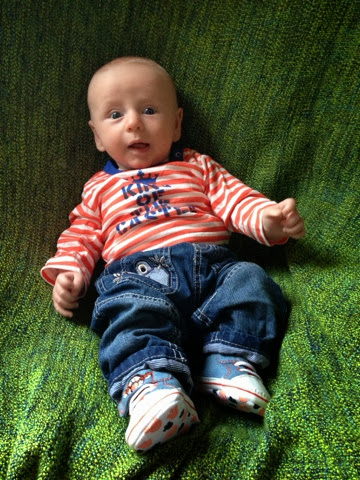 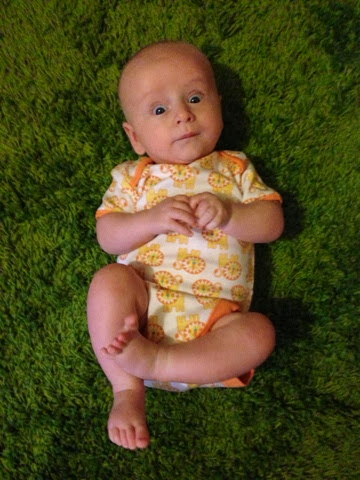 I don't even remember him being that small. I do remember however that we used to have a lovely morning routine of having a little top and tail wash, a moisturise and getting him dressed in whatever cute outfit I had planned out for that day.

Now I battle a 7 month old to stay put while I change a horrible solid poop nappy while he's rolling around trying to escape butt naked and crying because he doesn't want his face wiped and stuffing the clothes I have laid out into his dribbley mouth while my stress levels rise.

To think I sat and laughed a couple of months ago while I watched my friend fight the same battle as I changed my baby in under a minute and he laid lovely and still for me. 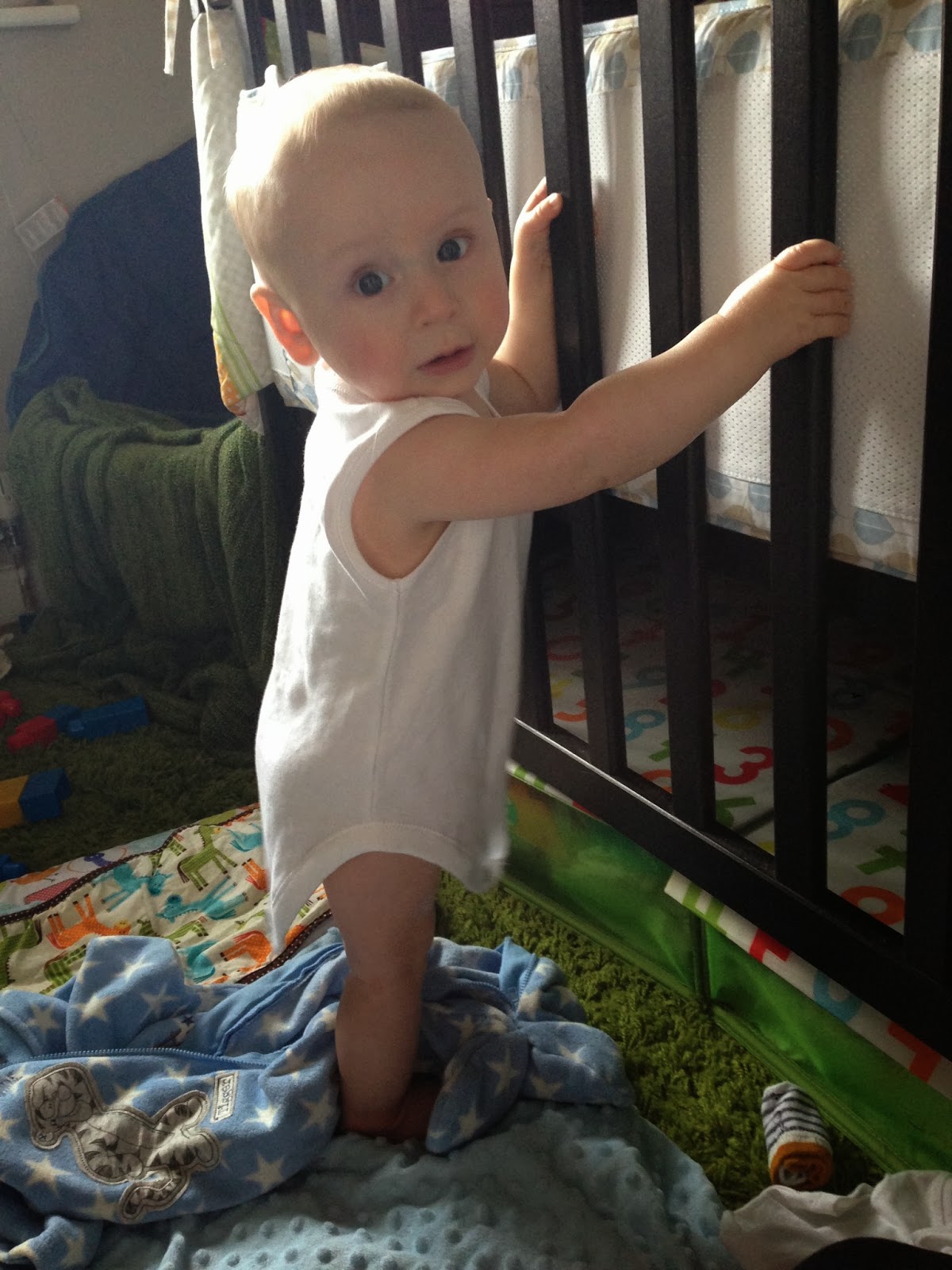 I have learnt that sometimes I just need to sit back and let things take longer. The above photo was after a very bad night and a bad morning when in my sleep deprived upset state I posted that I wanted to trade my 7 month old for a newborn because I was sure they cried less.

Of course I don't want to trade my baby. I love him and I love being his mum even if he doesn't sleep.

So I just let him be naked and a daredevil and risk him peeing on the carpet and let it take an hour to get dressed from PJs to clothes.


His little laugh when he thinks i'm excited about something he's doing. It melts my heart.

I had a cry and doubted myself and we went for a walk.

Then I felt a lot better and I deleted my previous comment and felt very guilty indeed.

It was my Grandma's birthday yesterday and she was 80.

I wanted something that displayed her 80 years in a lovely present and originally I was thinking of a family tree, ones like i'd seen on notonthehighstreet.com but they didn't have enough customisation to accommodate all of our family.

So then I came across these family trees by Jack Spratt Baby. It was perfect, we could all do our fingerprints while we were all together as a family at Grandma's and she had something that showed her 80 years as it was all the fingerprints of her children, grandchildren and her great grandson. 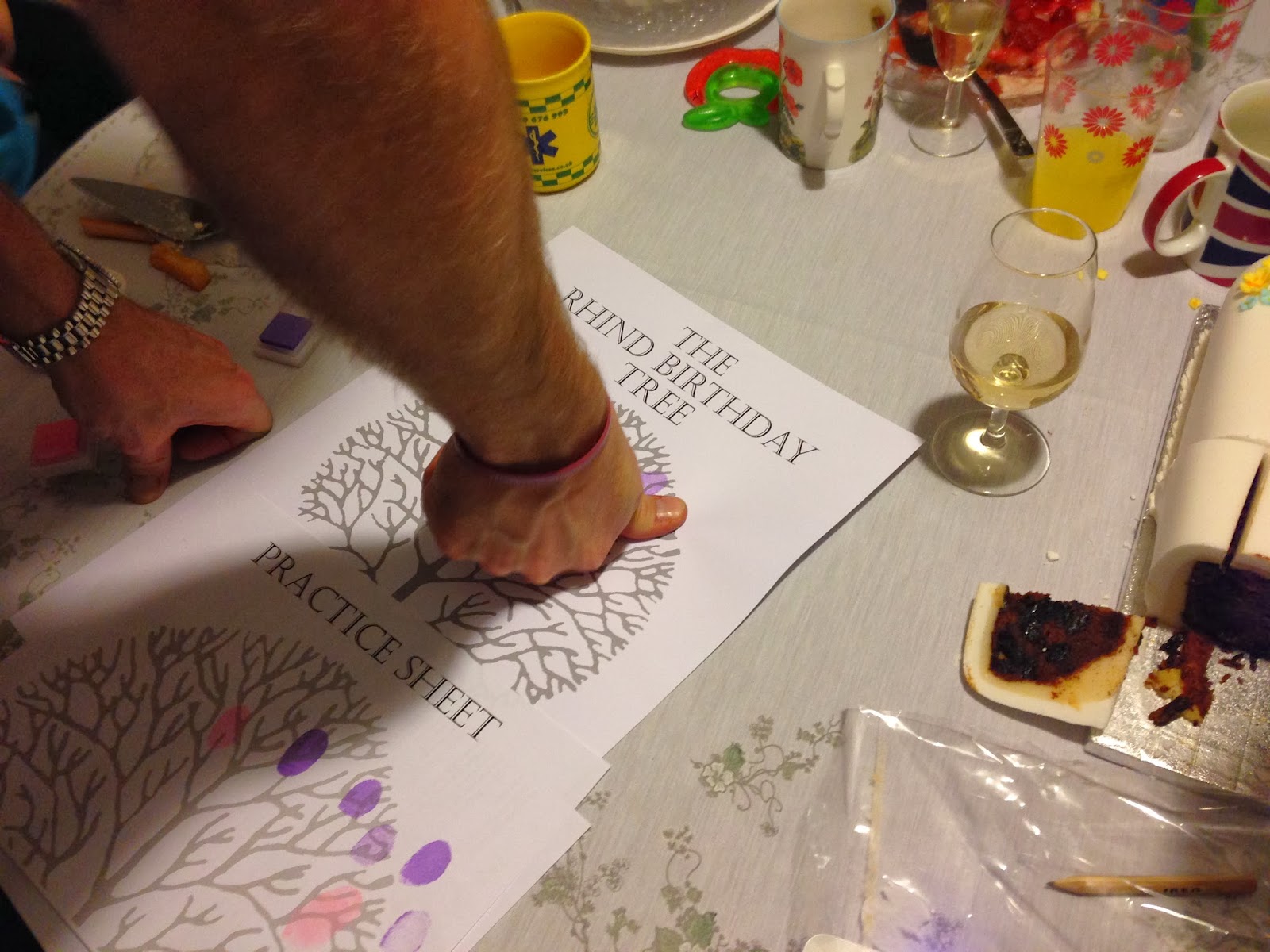 It turns out that everyone likes finger printing...

We all had a great night and we found out that LJ really likes bagpipes...


He was going crazy dancing on GG's lap! So funny. I'll have to get some bagpipe music for home entertainment.

I have to remember to use my real camera every so often when LJ and I are in the house or out and about even. It's so easy to just use your phone for photos as it's always close by, but then I catch a photo like this and the quality is 100 times better and I wish I always had this camera with me (and that I could get a good photo!). 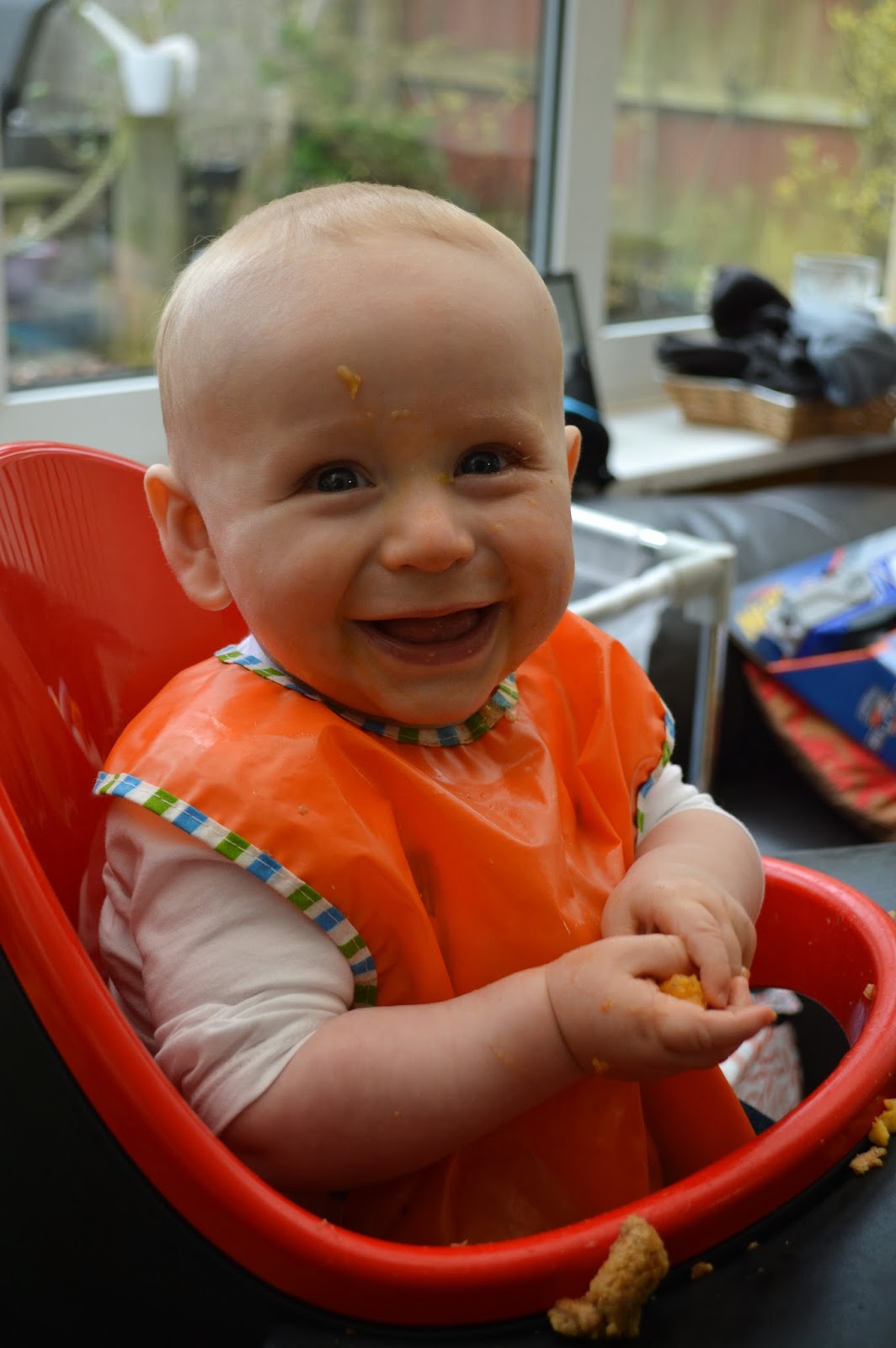 I think I was pulling funny faces over the top of the camera and hoping for the best. Usually I do some sort of crazy dancing for him while he eats his lunch and he finds me pretty funny.

Talking of Cameras, I have another item to add to my wish list.

The Bloom Theory Camera Straps, especially this one. 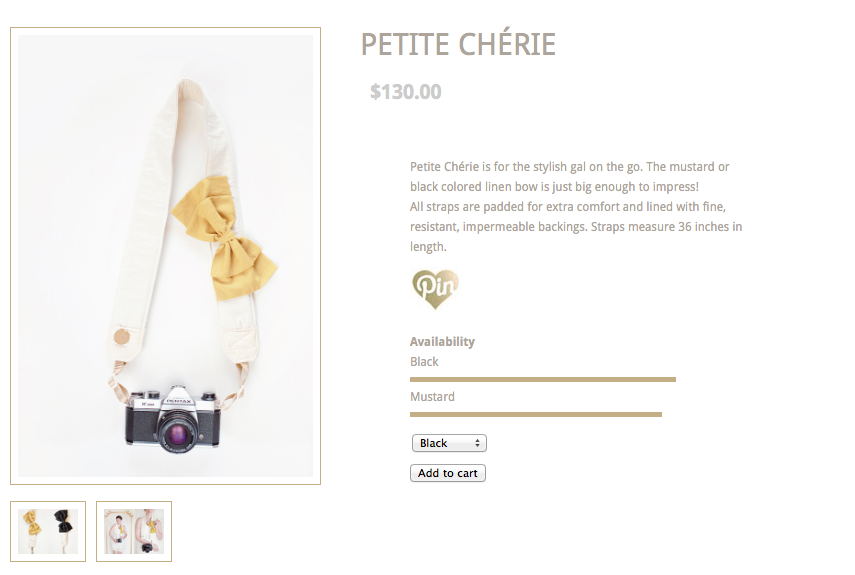 Also, why is everything I love from America?

Can someone show me some British cool products please?! They obviously aren't popping up on my instagram often enough. 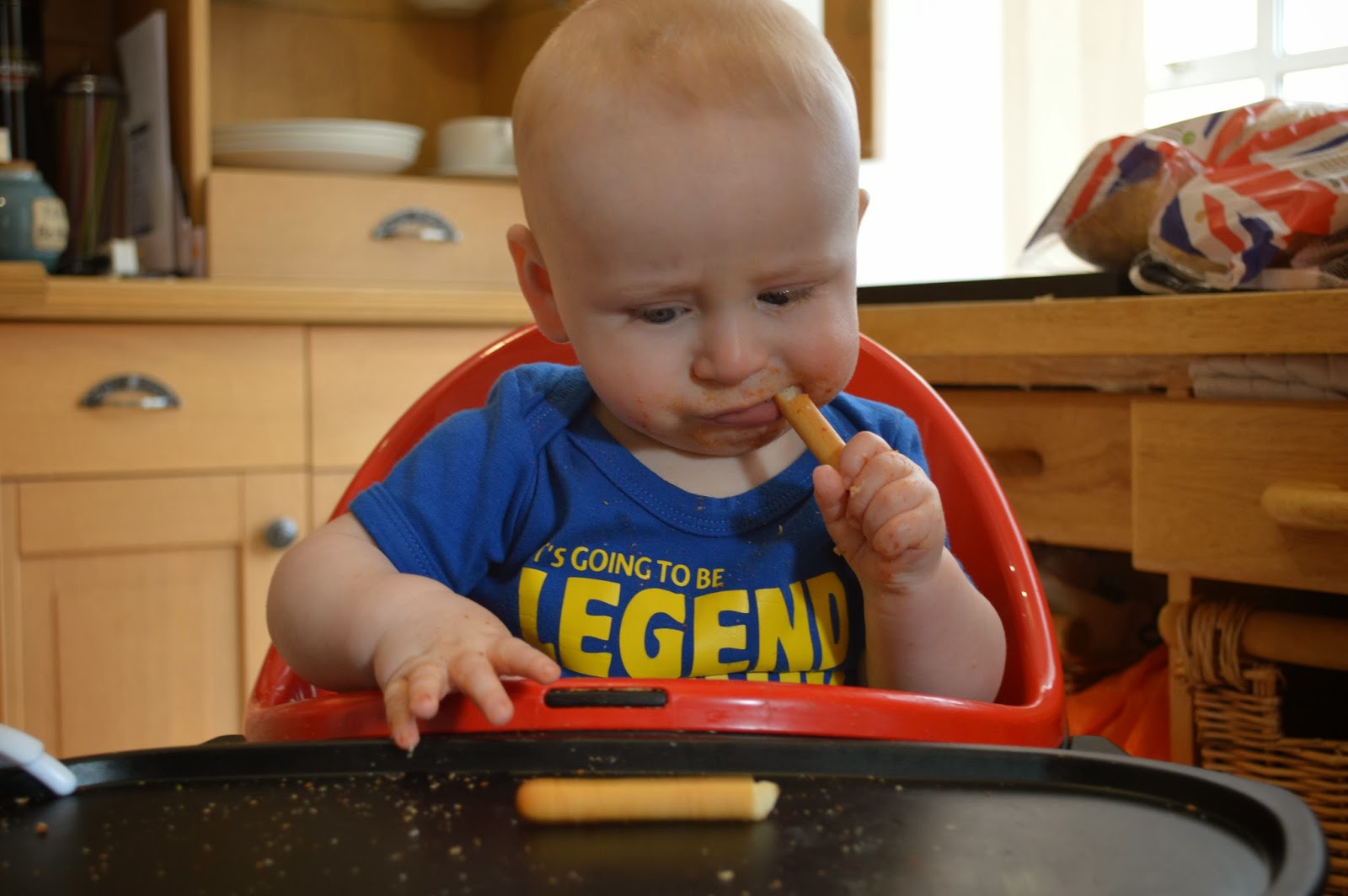 Breadsticks have been my friend recently in giving me half an hour to get things clean, tidy, ready or prepared while LJ gums away (Yes, still no teeth) as he is only happy when he's got food in his hand at the moment, or maybe 10 minutes of Yo Gabba Gabba (that's one weird but brilliant programme).

Notice how I have loads of videos and photos of him eating? It's because it's the only time he isn't crying at the moment.

Ok, that's a little lie but mostly i'm only hands free and not being used as a climbing frame when it's food time. 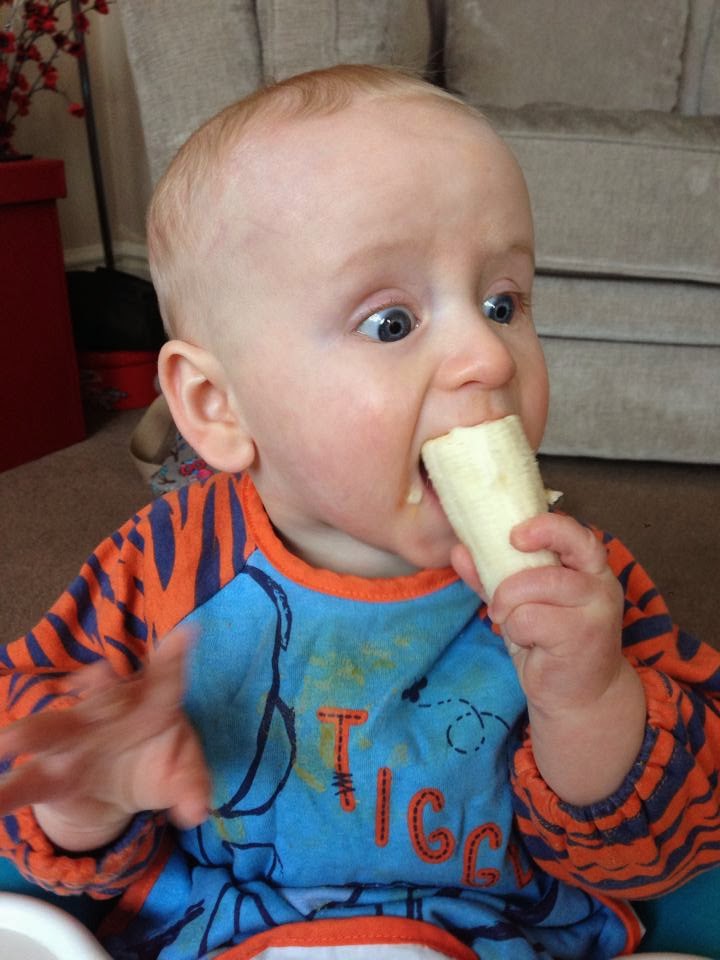 So other new things this week. 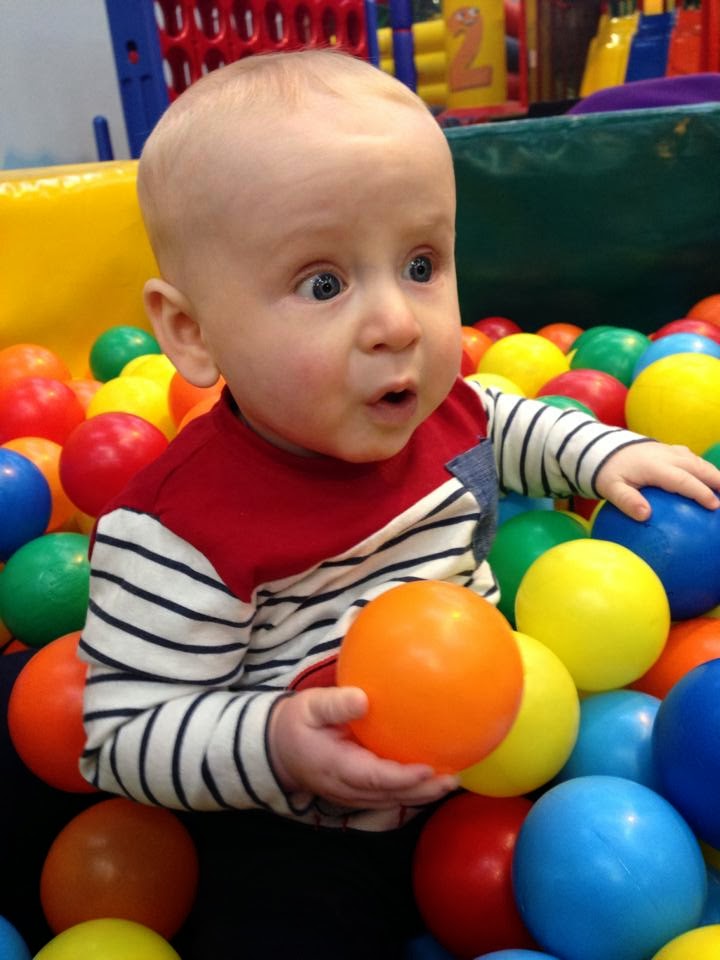 A fan of the balls outside on hard ground... not such a fan of being in a pool of them.

The hoover which used to be my life saver when he was tiny, is now a big scary noisy machine and should mummy think herself so lucky to do something in the daytime like cleaning, then she must do it while balancing a 7 month old on her hip at the same time as driving a Henry around the house and avoiding stray toys. 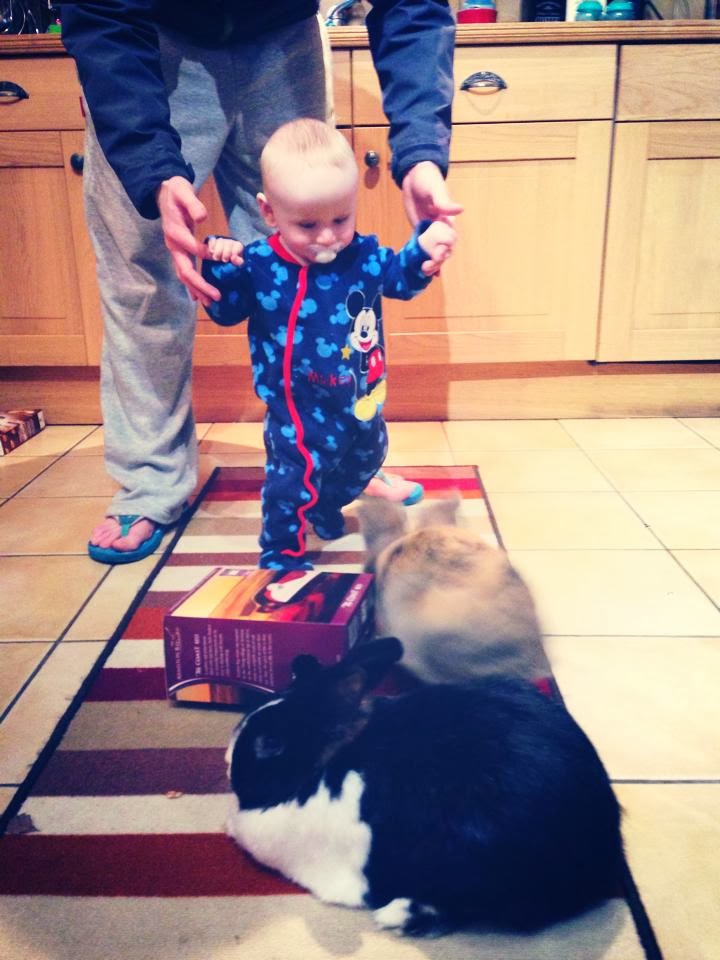 Loves however is animals at the top of the list! He loves them! He laughs in excitement and his hands and feet rotate round as he tries to reach out to touch them.

Our Rabbits?
Not so keen on the dribbling baby bum shuffling towards them.

We have however decided we may get a cat (rescue cat) when we have our own place as LJ is fascinated with them! This is Peanut, my Uncle's cat. 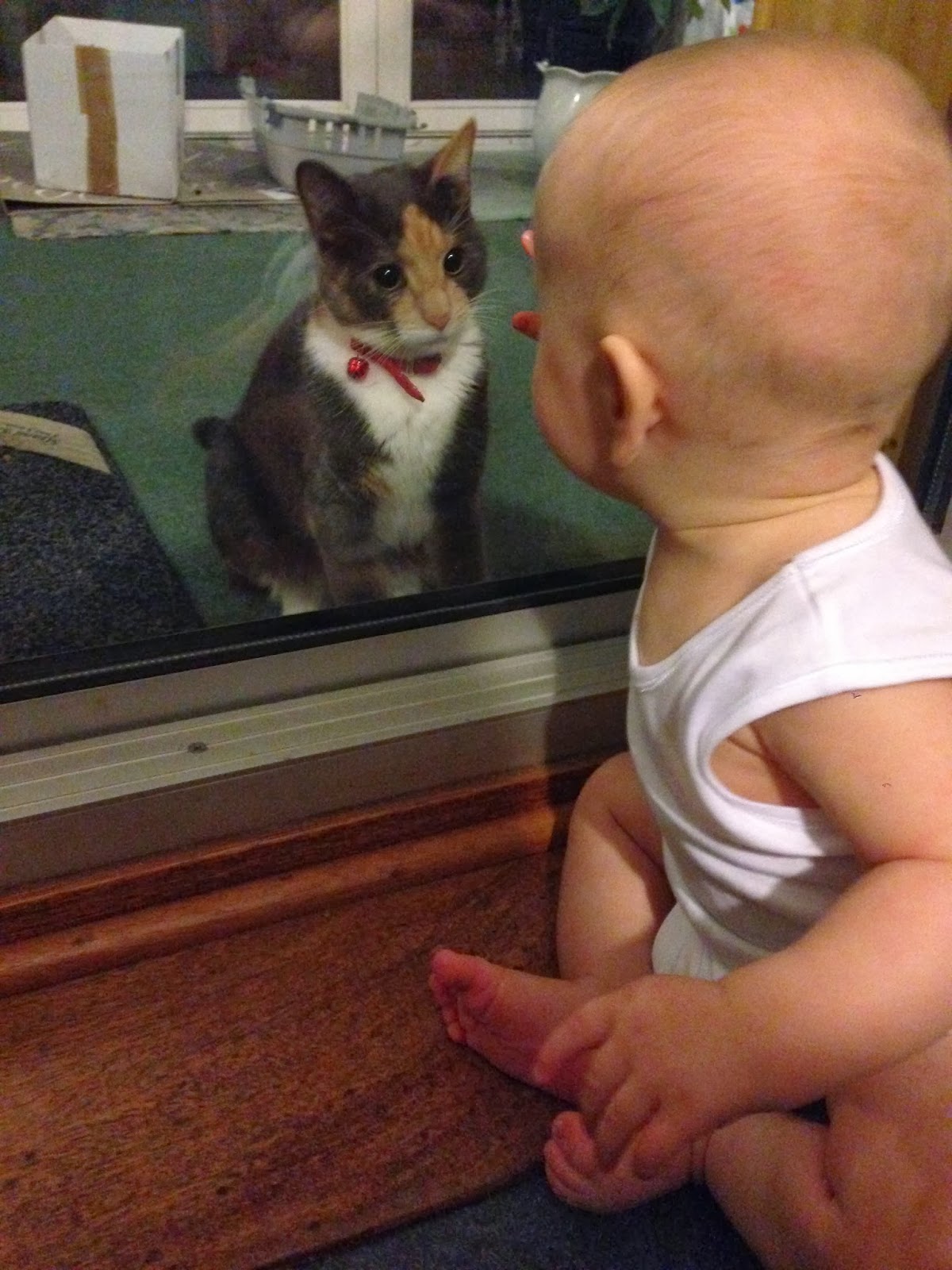 LJ would watch a cat all day long! (See why I'm keen now?)


Oh yes, another 'first' mummy moment. It was all going well until the little monkey worked out he could hold on to the rope and try and stand up.

It's been one busy week and we have a busy weekend coming up! I have a to-do list so long I don't know where to start and half finished projects that i'll post about soon (no idea when!?)

Finally, I went to work today! I had a keep in touch day and just as well as it took a long time for my brain to start working again.

It was a great day and I felt somewhat relaxed and enjoyed a hot tea and even painted my nails at lunch time (a bit like a Spa day I guess!) and I tried to remember how I used my brain before baby.

I asked some pretty stupid questions and couldn't remember names of things but luckily my colleagues are great and somewhat understood what I was trying to get at and helped me out. LJ had a great time with my mum and was out and about on lunch dates and gatherings. I got the pleasure of being greeted with a shriek of excitement and huge smiles as I came home from work and I scooped him up and realised how much i'd missed him. 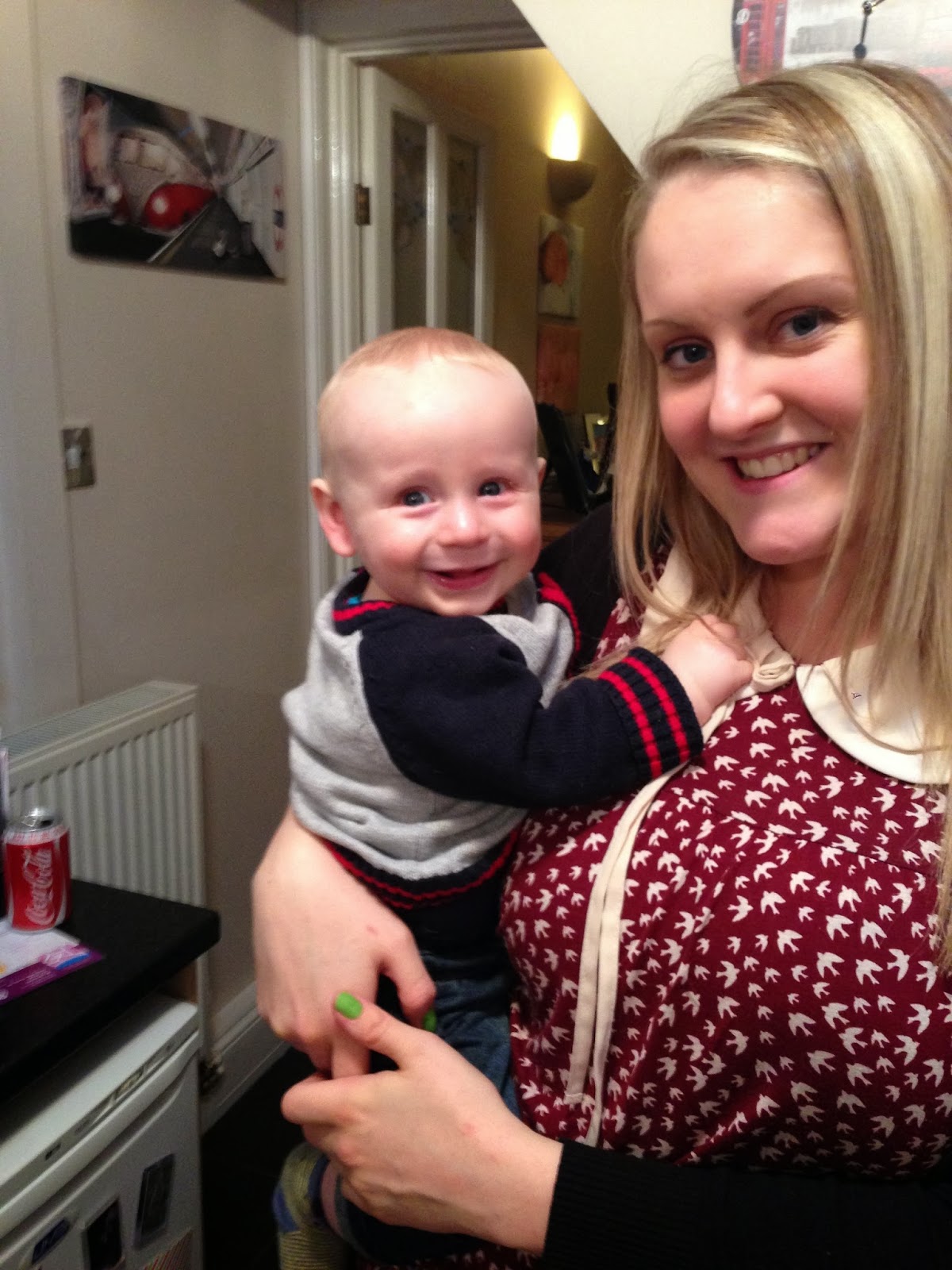 It was lovely to have the break though and I was even treated to a good night's sleep beforehand! I tried telling LJ how much happier EVERYONE was with some sleep but i'm not sure he was listening.